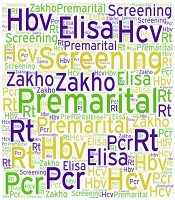 The Prevalence of Hepatitis B and C Virus Infections in the Couples Attending a Premarital Screening Program in Zakho City, Kurdistan Region of Iraq

Hepatitis B and C virus (HBV and HCV) infections are major global health issues and the leading causes of liver cirrhosis and hepatocellular carcinoma.

The aim of this study was to investigate the prevalence of HBV and HCV infections in couples attending a premarital screening program in Zakho city, Kurdistan region, Iraq.

This cross-sectional study was carried out in Zakho city, Kurdistan Region of Iraq, between January and October 2019. During this period, 2123 couples were screened for HBV and HCV as a part of premarital screening. The age of couples ranged from 18 to 63 years old. ELISA test was used to detect HBsAg, HBc IgG, and HCV Ab. Hepatitis C virus Ab positivity was then confirmed by HCV RT-PCR, and all HCV positive patients were then tested for genotyping.

To conclude, the present study showed a relatively low prevalence of HBV and HCV infections in the couples tested through the premarital screening program in Zakho city. The prevalence of HBV seropositivity was higher in males than females. Therefore special attention should be paid to males during prevention strategies.

Hepatitis B and C (HBV and HCV) infections are major global health problems and the leading causes of liver cirrhosis, liver failure, and hepatocellular carcinoma (1). Nowadays, it is estimated that more than 300 million patients are chronically infected with HBV, with a prevalence ranging from around 1% in developed countries to more than 8% in some developing countries (2, 3). On the other hand, more than 150 million subjects are currently infected with chronic HCV infection, with a prevalence ranging from 10% in Egypt to less than 1% in industrialized countries (4, 5). In our region, the prevalence of HBV infection ranges from around 1% in Iraq, Iran, and Syria to as high as 7% in Yemen and some Saudi territories (6-8). The majority of the patients who are infected with HBV and HCV are asymptomatic, making the diagnosis and prevention of complications difficult. To combat the infections and their complications, a preventive plan should be implemented to reduce the transmission of the viruses and overcome the challenges of early diagnosis.

The aim of this study was to investigate the prevalence of HBV and HCV infections among the couples attending a premarital screening program in Zakho city, Kurdistan region, Iraq.

This cross-sectional study was carried out in Zakho city, the Kurdistan region of Iraq, between January and October 2019. During the period of the study, 2123 couples were screened for HBV and HCV infections as a part of premarital screening. The age of the couples ranged from 18 to 63 years old. All the subjects who agreed to participate were recruited to the project.

3.2. Screening for HBV and HCV

3.3. Quantification of HCV RNA and Genotyping

The patients who tested positive for HCV Ab were subjected to molecular analysis to confirm the infection. Hepatitis C viral load was studied by the Xpert HCV quantification assay (Cepheid, Sunnyvale, California, the USA). In this procedure, HCV RNA is amplified in the range of 10 to 108 IU/mL. All HCV-positive samples were then sent for HCV genotyping by reverse hybridization (NLM, Milan, Italy).

The project’s protocol was approved by the scientific and ethics committee of the College of Medicine, University of Zakho. Informed written consent was obtained from all the participants before collecting samples.

Between January and October 2019, 4246 people were recruited, including 2123 males and 2123 females. All the subjects were apparently healthy and asymptomatic and had a negative history of viral hepatitis.

Among the investigated samples, only one female (1/4246, 0.047%) tested positive for HCV Ab. To confirm the diagnosis, RT-PCR was performed, rendering a viral load of 232000 IU/mL. Then the sample was sent for HCV genotyping that revealed HCV genotype 4.

Hepatitis B and C infections are common public health issues, particularly in under-developed countries such as Iraq. The majority of the individuals assessed in the current study were asymptomatic. Subsequently, late diagnosis in this condition may lead to the development of serious consequences such as liver cirrhosis and hepatocellular carcinoma. The prevalence of viral hepatitis, particularly HBV and HCV, has been studied thoroughly in the region (9-11). In a study conducted in Babylon (12), investigating the prevalence of HBV, the seroprevalence of the infection was shown to be less than 1%, which is consistent with the studies conducted in Kurdistan region, Northern Iraq (7, 12, 13). In this study, the overall prevalence of HBV was 0.89%. Interestingly, the prevalence of HBV in males was as twice as its prevalence in females. The same trends were found in Italy and Iran (14, 15). This phenomenon is somehow difficult to explain, and more studies are needed to explore the reasons behind the higher prevalence of HBV among males.

In a previous study in our region, the prevalence of HCV positivity was reported 0.2% (11). The prevalence of HCV infection has been studied in the general population of different countries; for example, it was found to be 1.1% in Afghanistan, around 1% in Turkey, and more than 4% in Pakistan (16, 17). In our study, the prevalence of HCV was 0.047%. Considering the low prevalence of this infection and the development of new powerful medications, it seems feasible to eliminate HCV infection in our society. In a previous study conducted in the Kurdistan region of Iraq on the subjects with haemoglobinopathies infected with HCV, 53% of them typed as HCV genotype 4 followed by 23% as genotype 1 (18). In another study conducted on patients with renal failure in our region (In Zakho city, Kurdistan Region, Iraq), HCV genotype 1 was the most common genotype (19). In this study, the only patient infected with HCV revealed genotype 4.

To conclude, the prevalence of HBV and HCV infections seems to be low among the couples attending premarital screening in the Kurdistan region of Iraq. The prevalence of HBV was higher in males than females, implying that more attention is needed to be paid to preventive screening plans among men.

Copyright © 2021, Zahedan Journal of Research in Medical Sciences. This is an open-access article distributed under the terms of the Creative Commons Attribution-NonCommercial 4.0 International License (http://creativecommons.org/licenses/by-nc/4.0/) which permits copy and redistribute the material just in noncommercial usages, provided the original work is properly cited.
download pdf 86.78 KB Get Permission (article level) Import into EndNote Import into BibTex
Number of Comments: 0