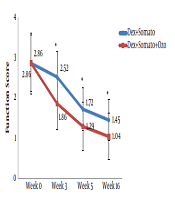 Prolotherapy, as an alternative therapy, has emerged as an effective treatment for chronic musculoskeletal injury, including knee osteoarthritis (OA). Several studies have mention ozone as a potential treatment for these diseases, which is based on analgesic, anti-inflammatory, and anti-oxidant.

The current study aimed to investigate the effect of adding ozone gas to hypertonic dextrose and somatropin for knee prolotherapy in patients with knee OA. For this purpose, pain, knee stiffness, and physical activity are measured.

Osteoarthritis (OA) is a major cause of pain, stiffness, and malfunctioning of joints, which carries considerable disability in adults (1). OA most commonly affects the knees because of the mechanical pressure being applied in the weight-bearing process (2). The goals of OA treatment are to sedate the pain, reducing swelling and disability, and improving the patients' quality of life. Few effective treatments are available for those who suffer from OA, including pharmacologic (analgesics, nonsteroidal anti-inflammatory) and non-pharmacologic interventions (muscle strengthening, physical and herbal therapies, intra-articular injection, arthroscopic, and arthroplasty surgery) (3). To date, however, no pharmacological intervention could stop the progressive nature of OA. A recent systematic review has shown that intra-articular injections are preferable to nonsteroidal anti-inflammatory drugs in the treatment of OA (4).

Prolotherapy, a well-known proliferative therapy, is a therapeutic option beneficial for musculoskeletal disorders such as tendonitis and OA in recent years (5). Although it has been used for several decades to treat knee OA, but its mechanism of action is not clear yet. Solutions such as hyperosmolar dextrose and platelet-rich plasma are serially injected as regenerative solutions to stimulate, theoretically, host inflammatory response that, in turn, strengthens connective tissue, especially collagen fibers, and improves biomechanics and joint function (6, 7). The application of prolotherapy and its efficacy is a matter of controversy. Besides, evidence generated by experimental and clinical studies are not sufficient to make a decision (8).

Ozone is another potential therapeutic option in addition to pharmacological and rehabilitation therapies. Recent experimental studies proposed that the mechanism of action of ozone is based on analgesic, anti-inflammatory, and anti-oxidant properties. It's about a decade that ozone is using to treat several musculoskeletal disorders. Moreover, there are evidence of its effectiveness in treating chronic low back pain (9, 10).

The current study aimed to assess the efficacy of adding ozone to hypertonic dextrose and somatropin for intra-articular knee prolotherapy in the OA patients by considering pain, stiffness, and physical activity of the knee as the main outcomes.

The current study aimed to assess the efficacy of adding ozone to hypertonic dextrose and somatropin for intra-articular knee prolotherapy in the OA patients by considering pain, stiffness, and physical activity of the knee as the main outcomes.

After obtaining approval of the Ethical Committee and written informed consent, 60 eligible participants with chronic knee OA (diagnosed based on the criteria of American College of Rheumatology) and a knee radiologic stage 1-3 (based on the Kellgren–Lawrence criteria) were enrolled in this randomized single-blinded controlled trial study. The study design and protocol were registered at the Iranian Registry of Clinical Trials (IRCT201410187984N20).

After intravenous cannula insertion, standard monitoring (ECG, HR, and pulse oximetry), on supine position, and aseptic conditions, patients were prepared for the intervention. In both groups, local anesthesia was conducted with 2ml lidocaine 1%, by using a 22-gauge needle by the pain physician, from the superolateral part of the patella with an angle of about 45° under the fluoroscopic guidance which entered the knee joint space. Afterward, confirmation was performed by articular fluid aspiration. In the DS group, 10 ml of 50% hypertonic dextrose and 4 IU human somatropin (Eutropin, LG, Korea) was injected. In the DSO group, in addition to 10 ml of 50% hypertonic dextrose and 4 IU somatropin, 10 ml of ozone 25 mcg was added. Following the intervention, patients were monitored for potential side effects such as pain, swelling, and hemorrhage. Each patient received three intra-articular knee injections in weeks zero, three, and five. After providing all three procedures, patients were assessed by another researcher, who was local anesthesia, at the third, fifth, and sixteenth weeks, and the WOMAC score was calculated. Participants were asked not to use any medications, particularly NSAIDs, after initiation of prolotherapy and during the study period. In the case of intolerance pain, they were ordered to use oral acetaminophen 500 mg up to three times a day.

The primary outcome was variations in the knee-related quality of life [measured by the Western Ontario McMaster University Osteoarthritis Index (WOMAC)]. The WOMAC questionnaire contains three subscales: (1) pain (5 items); (2) stiffness (2 items); and (3) physical function (17 items). The subscales are scored on a five-point Likert scale, ranging from zero (nothing) to four (extreme), with the total score ranging from zero (lowest) to 96 (highest).

Data were analyzed using SPSS version 18 (IBM, USA). The chi-square and independent t-tests were used to analyze continuous and categorical variables, respectively. Descriptive statistics and outcomes at each time point were described by the mean and standard deviation (SD). Repeated measures analysis was used to compare WOMAC total and subscale scores at different times. Statistical significance was considered when P-value < 0.05.

A total of 60 patients were investigated in the present study. The overall characteristics of the participants are provided in Table 1. After Sixteen weeks, the mean WOMAC score in the DS group was decreased significantly from 64.9 ± 10.6 (before the procedure) to 49.2 ± 9.0 (after the procedure) (P < 0.001). A similar decrease was observed for the DSO group, so that in the sixteenth week after providing the intervention, the mean WOMAC score was decreased significantly (from 64.1 ± 11.3 to 41.3 ± 8.0 (P < 0.001)). The observed decrease in WOMAC score in the third and sixteenth weeks after providing the intervention was significantly lower in the DSO group compared to the DS group (P < 0.005). We have also compared the WOMAC scores of both groups for different subscales at the third, fifth, and sixteenth weeks after providing the treatment. Subjects of the DSO group had lower pain and stiffness score in the third week (Figure 2 and 3). Also, the function score was lower in these patients at the third, fifth, and sixteenth weeks compared to those in the DS group (P < 0.05) (Figure 4).

Table 1. The Baseline Characteristics of Patients a 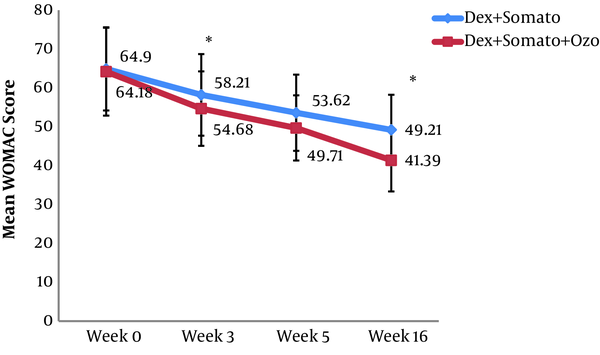 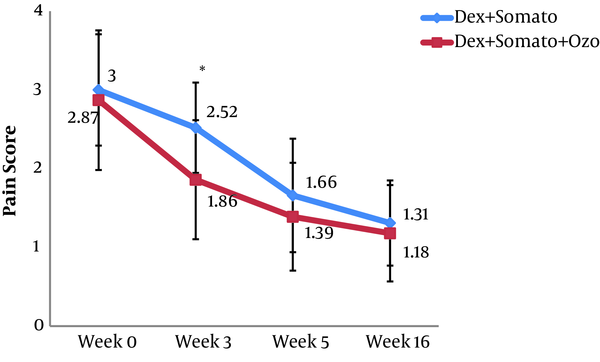 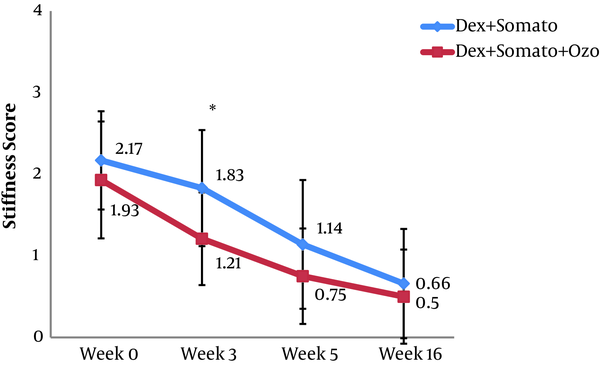 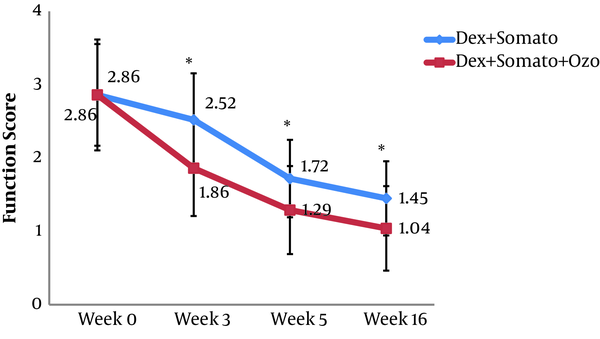 Mean function score of at third, fifth, and sixteenth weeks after treatment. * P-value < 0.005.

The main objective of the present study was to investigate the efficacy of adding ozone gas to hypertonic dextrose and Somatropin for knee prolotherapy in OA patients to sedate their pain and to improve stiffness and function of the knee, measured by the WOMAC score. Based on the findings, participants of both groups experienced substantial improvements in all dimensions of the WOMAC during the study period. However, the observed improvement was higher in the group that received ozone in addition to dextrose and somatropin. In a single armed clinical study conducted by Eslamian et al., prolotherapy with dextrose could significantly decrease patients’ pain both at rest and during activity. Also, the authors reported that the intervention improved range of motion (ROM) in the knee joint and WOMAC scores during their six months follow up. Also, Rabbago et al., in a study with 52 weeks of follow-up, reported a significant decrease in WOMAC score, pain, stiffness, and function (11). Previous studies with various follow-up periods have assumed that because of the increased amount of cartilage volume after prolotherapy sessions, it would result in significant improvement in the WOMAC score in a short period, particularly regarding the pain subscale, and this effect will decrease over time. The observed similarities between the findings of studies with long-term follow-ups can be attributed to this issue (12-14). In accordance with our study, most of the investigations in this field have considered the intra-articular injections by targeting the damaged cartilage and intra-articular ligaments.

There are studies that utilized dextrose for knee prolotherapy (both intra and extra-articular injections) and have reported promising results concerning pain relief, stiffness, and increased function in OA patients (15). In a clinical study on the effect of prolotherapy with erythropoietin in comparison to dextrose, Rahimzadeh et al. reported that erythropoietin, compared to hypertonic dextrose, had more efficacy in reducing pain and affecting the range of motion.

In the present study, by adding ozone to the composition of intra-articular injection with dextrose and somatropin, the WOMAC score of participants was significantly improved compared to the control group. It seems that ozone has augmented the possible mechanism by which prolotherapy affects patients with knee OA. The composition of dextrose, somatropin, and ozone activated different biological aspects of the healing process in joints. To date, experimental studies have mentioned the role of inflammation, soft tissue size, and strength for the effect of prolotherapy with dextrose (16). Prolotherapy injections stimulated an inflammatory response, which in turn led to secondary production of growth factors without causing any damage and initiation of proliferation phase in the joint (17). Erythropoietin also plays a pivotal role in this composition. Recent animal trials have revealed that erythropoietin stimulated osteogenesis, angiogenesis, and proliferation in a femoral segmental defect (18). Besides, Mihmanli et al. evaluated the efficacy of subcutaneous administration of recombinant human erythropoietin in osteogenesis and concluded that it could improve the rate and quality of bone healing during distraction osteogenesis (19).

On the other hand, multiple mechanisms are mentioned as possible causes of the ozone's effect on joints. It promotes angiogenesis at the level of cartilaginous by triggering local micro-vascularization and modulates the cytokines during the inflammation process by anti-inflammatory role (20, 21). Also, it has been argued that ozone therapy can promote wound healing by the proliferation of VEGF and TGF-α at the early stages of the treatment (22). Intra-articular knee ozone injection can sedate the pain, similar to prolotherapy, by hypertonic dextrose (23). Also, Hashemi et al. have reported the significant efficacy of ozone (intradiscal injection) on pain relief and disability improvement in patients with low back pain caused by disc prolapsed (24). In contrast to their study, we designed a RCT on specifically knee OA and evaluated the outcome by a valid scale that contains three aspects of health-related quality of the knee joint and found significant results, particularly in short-term follow-up.

The present study had some limitations, including a small sample size and using self-reporting to collect information. Therefore, the authors recommend performing high-quality clinical trials with a larger sample size. Also, comparing the efficacy of prolotherapy with other complementary therapeutic options could be a matter of future research. Our encouraging finding for ozone could be a promising start for further investigations to clarify the effects of ozone therapy and its possible combinations.

Copyright © 2020, Author(s). This is an open-access article distributed under the terms of the Creative Commons Attribution-NonCommercial 4.0 International License (http://creativecommons.org/licenses/by-nc/4.0/) which permits copy and redistribute the material just in noncommercial usages, provided the original work is properly cited.
download pdf 173.61 KB Get Permission (article level) Import into EndNote Import into BibTex
Number of Comments: 0