This study aimed to assess the effects of using Extracorporeal Shock Wave Therapy (ECSWT) and phonophoresis therapy on pain and neck disability in patients with neck myofascial pain syndrome (MPS).

Forty eligible patients were randomly divided into two groups of ECSWT (received three sessions of ECSWT, once a week for three weeks) and phonophoresis (received ultrasound using hydrocortisone gel 1% over the trigger point on trapezius muscle, three times a week for three weeks). Patients in both groups received the same stretching exercise program and drug regimen during the intervention.

Both phonophoresis and ECSWT groups effectively decreased pain and neck disability in patients with MPS, with the superiority of ECSWT with a more lasting effect for a month after the end of the treatment.

Neck pain occurs commonly throughout the world and is one of the leading causes of disability, which is associated with substantial disability and economic cost (1). The yearly prevalence of neck pain in the general population has been reported between 16.7 and 75.1% .(1-3) The global point prevalence of neck pain was 4.9% (4), and in the global burden of disease 2010 study, neck pain had the fourth rank of disability among all 291 studied conditions (5). Absence from work due to a medical condition was due to a musculoskeletal disorder in 75% of the individuals (6). Thus, neck pain, as one of the leading causes of work absenteeism and reduced work productivity, increases healthcare costs on individuals and healthcare systems (7, 8).

The role of myofascial trigger points in pain processes in patients with mechanical neck pain has been proposed during the past decade. There are muscular hard bands in trigger points, and the pain returns ambiguously or intensely with different severities (9). Two studies have been conducted on myofascial pain syndrome (MPS) among patients suffering from neck pain (9, 10), and in a recent population-based study, all participants with chronic non-specific neck pain had MPS (10).

MPS is a well-known regional pain condition of skeletal muscle fibers characterized by myofascial trigger points, with an estimated overall prevalence of about 46% (11). As one of the leading causes of disability in musculoskeletal system problems, MPS is more prevalent at the age of 30 to 60 and in women than men (12, 13). Since the exact pathophysiology and etiology of MPS are still unknown, the treatment approaches mostly target symptoms. Pharmacotherapy, injection therapy, physical therapy, and behavioral modification are traditional therapeutic approaches to MPS treatment (14).

In recent years, extracorporeal shock wave therapy (ECSWT) and ultrasound as non-invasive methods have expanded to MPS treatment. Studies have shown some degree of efficacy to apply ECSWT in MPS treatment. One study demonstrated the efficacy of high-energy ECSWT on alleviating pain in patients (15). Other studies show the same efficacy of low-energy ECSWT compared to a placebo (16). A randomized pilot study showed that both high- and low-energy ECSWT effectively improved MPS symptoms with the superiority of high-energy ECSWT (17). On the other hand, regarding applying ultrasound in MPS treatment, some clinical trials established the benefits of ultrasound, while other studies did not show any significant effect of ultrasound (15).

This study aimed to compare the efficacy of phonophoresis with hydrocortisone gel and ECSWT on pain and physical disability in patients with neck MPS.

After the study protocol was approved at the Institutional Review Board and Ethics Committee of the Isfahan University of Medical Sciences and registration of the study for public registry code in Iran (IRCT 20190618043931N2), 40 eligible patients with myofascial pain of neck from physical medicine clinics in Isfahan, Iran, were enrolled. Patients older than 18 years old were included in the study if they had pain in at least one active trigger point located in the upper trapezius muscle for at least six months. The exclusion criteria were treatment programs for neck or shoulder pain during the last two months, neck or shoulder surgery during the last two years, neck radiculopathy, trauma history, cardiovascular, respiratory, or allergic disease, neck osteoarthritis, coagulation disorders, and pregnancy.

After informing the patients about the study objectives and obtaining signed written informed consent, they were randomly assigned into two groups. Randomization was allocated by Random Allocation software. Twenty patients were assigned to the ECSWT group, and 20 were assigned to the phonophoresis group. Patients in both groups received the same stretching exercise program for upper trapezius muscle, and the drug regimen included tizanidine at bedtime and meloxicam (7.5 mg/day) for three weeks.

The ultrasound was done in the phonophoresis group by applying hydrocortisone gel 1% (circularly with a thickness of 2 - 3 mm) with 1 MHz frequency and 1.2 Wt/cm2 power over the trigger points on the trapezius muscle for 10 minutes. In this group, therapies were applied three times a week for three weeks.

Patients in the ECSWT group received three sessions of ECSWT with radial prob once a week for three weeks. ECSWT was applied using an electromagnetic type Dornier AR2 machine (the standard electromagnetic DUOLITHSD1, Storz Medical, Tagerwilen, Switzerland) adjusted to the following settings: 2,000 pulses were applied at each session at an intensity of 0.2 mJ/mm2 with 10 Hz frequency.

The treatments were performed in the same environmental condition by the same therapist. For data collection, the same physician evaluated all patients before, immediately after, and four weeks after the treatment.

This study's primary outcomes were pain intensity and the degree of physical disability measured before, immediately after, and four weeks after the treatment. Pain intensity was assessed by the visual analog scale (VAS, 0 - 10 cm; 0 means no pain, 10 means the worst possible pain). The degree of physical disability was measured using the Neck Disability Index (NDI). The NDI is a multidimensional and self-administered index containing 10 items related to functional activity, symptom, and concentration. After adding all scores from the questions, the final NDI score was calculated for the patients. A higher score indicated increased functional disability related to cervical abnormality.

After data collection, SPSS version 25 (SPSS, Inc., Chicago, IL, USA) was used for final analyses. Mean ± standard deviation (SD) or number (%) were used for descriptive data, as appropriated. Before data analysis, the normality of the data was assessed by the Shapiro-Wilk test. The pain and NDI scores in each time point were compared between the groups using an independent sample t-test. ANCOVA was used for variables between the groups at the end of the treatment and four weeks after the treatment by controlling baseline values as a covariate. Also, the trend of the pain and NDI scores was compared within and between the groups using repeated measurements of ANOVA. The level of significance was considered to be less than 0.05.

Table 1. The Baseline Characteristics of the Studied Patientsa 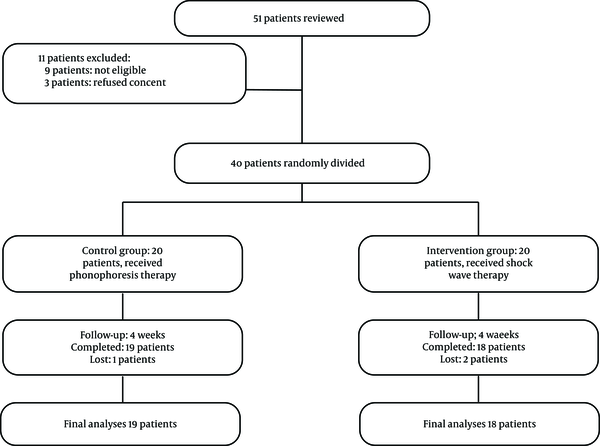 Figure 1. Flowchart of the study.

Table 2. Comparison of the Pain and NDI Scores Between the Groupsa

dP-value3, comparing the trend of variables in within groups using repeated measurements of ANOVA.

Figure 2. Trend of pain score during the study period between groups by repeated measurement of ANOVA (P-values = 0.066).

Figure 3. Trend of neck disability index score during the study period between groups by repeated measurements of ANOVA (P-values = 0.517).

This study focused on comparing the effects of phonophoresis with hydrocortisone gel and ECSWT on pain and physical disability in patients with neck MPS. Our results indicated that both treatment methods significantly improved pain intensity and neck disability immediately after and four weeks after the intervention. Although no significant difference was observed between ECSWT and phonophoresis at the end of the intervention, pain intensity and neck disability were significantly more reduced than phonophoresis in the ECSWT group four weeks after the end of the treatment, showing the prolonged effect of ECSWT compared to phonophoresis in MPS treatment.

The use of ECSWT in MPS treatment compared to placebo or other treatments has been reported in various studies (24, 25); however, there is limited evidence that focused ECSWT is useful for short-term neck pain in MPS (26). Müller-Ehrenberg showed the positive effect of ECSWT on pain relief in the treatment of MPS (16). In Roman et al.'s study, ECSWT was a significant improvement in pain intensity (27). Moreover, in a randomized pilot study by Park et al., two different regimens of ECSWT were compared, and they showed that both regimens were useful in reducing pain and physical disability in patients with MPS; however, high-energy was more effective (15). Similar to these findings, our results indicated that three ECSWT treatment sessions were practical in treating MPS and decreasing pain and physical disability in these patients. Although most studies reported positive effects of ECSWT on trigger points, the dose-dependent nature of ECSWT and the lack of a standard treatment protocol are the main disadvantages of this method.

Based on our results, more significant improvement was observed on neck disability in the ECSWT group than in the phonophoresis group, four weeks after the end of the treatment. Lower neck disability in the ECSWT group can be related to functional improvement that can be explained by more pain relief of the upper trapezius in these patients. These results are comparable with Haghighat et al.'s study results, showing the favorable outcomes after four weeks of treatment with ESWT (28). However, our results are consistent with the results of a former study by Toghtamesh and colleagues, who found that one session of shock wave therapy in patients with MPS of trapezius muscle significantly decreased the VAS level and increased ROMs of lateral neck flexion (29).

This study had some limitations. First, the trained stretching exercise program was home-based, and during the follow-up period, the patients were not questioned about the duration of the exercises and compliance with this program. Second, we did not have control groups for the studied treatments, sham ECSWT, and conventional ultrasound therapy, which could be useful in clarifying the exact effect of adding the studied treatments to the stretching exercise programs and drug regimens. Thus, further studies may elucidate the effects of ECSWT and phonophoresis in MPS treatment.

The findings of the present study indicate that both phonophoresis and ECSWT treatments may effectively decrease pain and neck disability in patients with MPS. With a more lasting effect, one month after the end of the treatments, ECSWT show superior pain relief and neck disability results.