The Prevalence of Metabolic Syndrome in Iranian Firefighters 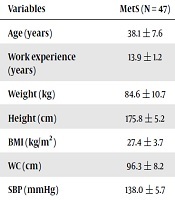 Metabolic syndrome (MetS) is closely related to the risk of cardiovascular disease (CVD), particularly in stressful occupations. Firefighting is a hazardous profession and is associated with high metabolic risk. However, limited studies on firefighters are available.

This study aimed to determine the prevalence of MetS among firefighters in Zahedan city, Iran.

MetS was presented in 47 (33.6%) of the firefighters. Among the metabolic risk factors, abdominal obesity (87.1%), low-high density lipoprotein (HDL-C) (62.1%), and hypertriglyceridemia (61.4%) were more prevalent. Moreover, a significant increasing trend was found with increasing age and work experience (both, P = 0.05). However, no significant differences were found for the remaining metabolic risk factors.

The findings showed that about one-third of the firefighters had MetS. Age, abdominal obesity, and dyslipidemia were independent risk factors for MS in the firefighters. Thus, efforts should be undertaken to implement healthy lifestyle promotion programs for firefighters.

Metabolic syndrome (MetS) is a global epidemic disorder associated with pathological conditions, which is characterized by dyslipidemia [high triglyceride and low HDL cholesterol (HDL-C)], abdominal obesity, high fasting blood sugar (FBS), and hypertension (1). It is predicted that by 2025, around 300 million people worldwide will have type 2 diabetes, which is one of the major risk factors for metabolic syndrome (2). The prevalence of MetS is more common in some developing countries than in Western countries (1). MetS is also prevalent in Iran and has a growing trend with age in both sexes (3, 4). It has been reported that the syndrome is closely related to the risk of cardiovascular disease and diabetes (5).

The inherent causes of MetS are not well-known; however, factors such as aging, stressful occupations, sedentary activity, and genetics indirectly influence it (6). Work stress is one of the major risk factors for metabolic syndrome. A high prevalence of hypertension, hyperlipidemia, diabetes, and other cardiovascular disease (CVD) risk factors have been reported in stressful occupations such as emergency services, police work, and firefighting (7). Firefighting has a high metabolic burden and often results in severe cardiovascular stress (8, 9). The prevalence of MetS has been confirmed in 14% of German firefighters (2) and 56.6% of Iranian firefighters (10). Almost 45% of all work-related deaths among firefighters are reported to be caused by CVD (9). On-duty cardiac events frequently occur among firefighters prone to underlying structural heart disease. Intense physical activity, emotional stress, and pollutants present in the fire are the major risk factors of sudden cardiac death in the firefighting occupation (11). Central obesity as one of the metabolic syndrome components is a strong risk factor for diabetes and CVD, which has been reported in 45.9% of the US firefighters (9) and 28.9% of Iranian firefighters (10). Chronic stressors such as lone-term shift work and irregular mealtimes may increase obesity, hypertension, and dyslipidemia in firefighters. These factors identified as metabolic syndrome components may increase CVD risk (9). According to the literature review, few studies have evaluated the prevalence of MetS and its components in Iranian firefighters.

This study was performed to investigate the prevalence of metabolic syndrome in firefighters of Zahedan city, southeast Iran.

In this cross-sectional study, 140 male firefighters (mean age, 36.8 ± 7.5 years; range, 16 - 55 years) from the Fire Department of Zahedan were evaluated between June to October 2017. The inclusion criteria were cigarette smoking and at least two years of full-time employment as a firefighter with no history of underlying diseases including hypertension, kidney failure, hypo/hyperthyroidism, and liver diseases, known cardiovascular disease, and diabetes mellitus. The protocol of the study was approved by the Ethics Committee of Zahedan University of Medical Sciences (Code IR.ZAUMS.REC. 1396.2). Informed consent was also obtained from all the participants. Then, a personal data questionnaire on demographic characteristics, including age, education level, smoking status, work experience, and medical history, was completed for all the subjects.

Bodyweight and height were measured with light clothing and without shoes using a platform scale and a fixed stadiometer, respectively. The body mass index (BMI) was calculated as weight (kg) divided by height squared (m2). Waist circumstance was measured using a non-elastic tape at the narrowest point between the lower edge of the rib and the upper iliac crest. Blood pressure was measured twice using a standard sphygmomanometer on the right arm in a sitting position after resting for 10 minutes. The mean of the two blood pressure readings was used in the analysis.

The data were analyzed using SPSS software version 21 (SPSS, Inc., Chicago, IL, USA). The anthropometric and biochemical parameters were presented as mean ± standard deviation (SD) and frequency (%). A student’s t-test and a chi-square test were used to compare the quantitative variables and the categorical variables, respectively. Moreover, a Pearson correlation test was used to determine associations between the continuous variables. A P value of < 0.05 was considered significant.

Table 1. The Demographic, Anthropometric, and Clinical Characteristics of the Firefightersa

bComparison was performed between the MetS and no MetS groups using the student t-test.

Table 2. Diagnosis of Metabolic Syndrome and Its Prevalence Based on Age Groups and Work Experience in the Firefightersa

aData are presented as number (%).

bComparison was performed between the normal and abnormal values using the chi-square test.

Table 3. Prevalence of the Normal or Abnormal Values of Metabolic Risk Factors in the Firefighters According to the NCEP/ATP III Criteriaa

aData are presented as number (%).

bComparison was performed between the normal and abnormal values using the chi-square test.

This cross-sectional study is one of the few studies conducted on firefighters. The prevalence of MetS and its components was investigated in a total of 140 male firefighters working at the Fire Department, Zahedan, southeast Iran. The NCEP/ATP III criteria were used to determine MetS, and its overall prevalence was 33.6% in the firefighters.

Studies evaluating the role of occupational exposure have shown that firefighters experience high metabolic burden (8, 9), which might, if repeated and prolonged, cause cardiovascular disease (8). A study reported that the risk of MetS in firefighters was not significantly different from that in most other occupational people (12). However, few studies have been carried out on the prevalence of MetS in Iranian firefighters, and most of the studies have been performed on general population or patients. The prevalence of metabolic syndrome in the adult urban population in Iran was found between 18.3% - 57.8% (13). However, studies performed on firefighters in Iran and other countries demonstrated that the prevalence of MetS among firefighters was 28.9% in Iran, 39% in the United States (9% in Colorado) (8, 14), 28.3% in Cyprus (15), 21.4% in Korean Career Firefighters (12), and 14.4% in Germany (2). The observed differences in the prevalence of MetS in different communities and specific occupational conditions vary according to the criteria used to define it (2) and based on lifestyle-related factors, age, gender, excessive physical exertion, occupational stress levels and (shift work (1, 7, 12, 16). Overall, some previously published studies showed that the rate of metabolic risk factors including obesity, hypertention, and dyslipidemia was higher in firefighters compared to the general population (8, 12). However, Strauss et al. (2). in their study reported that metabolic risk factors did not significantly differ between office workers and firefighters.

There is evidence that obesity is related to a high risk of occupational disability in specific job groups (17). The association between BMI and metabolic syndrome in firefighters was reported in several studies (9, 17, 18). In our study, BMI in subjects with MetS was above the normal range of ≤ 25 kg/m2, and thus, it was consistent with overweight. Moreover, 42.9% of the firefighters in our study were overweight, which is above the prevalence of 19% - 39.7% among firefighters reported in some previous studies (17, 18). In other cross-sectional studies in the United States and the UK, overweight and obesity was prevalent in more than three-quarters of firefighters (8, 19). However, other studies on American firefighters showed a higher prevalence of overweight and obesity (8, 9, 20). The reason might be the fact that the evaluation of high muscle mass and low body fat percentage in most firefighters using BMI as a classification tool is not correct (9). WC is one of the indices of central obesity and estimates the risk of chronic obesity-related diseases, including metabolic syndrome. It is one of the most serious risk factors for cardiovascular disease (10). In the present study, an increased WC was shown in 87.1% of the firefighters. Smith et al. (9) and Strauss et al. (2) reported that central obesity was detected in 45.9% and 32% of firefighters, respectively. Although increased WC is likely related to sedentary activities, other lifestyle-related factors, including dietary intakes (21) and professional activities, also affect abdominal obesity (2), which we did not assess in our study.

MetS is a complex metabolic disorder, which is associated with high risk of cardiovascular disease (2). According to our findings, metabolic syndrome and obesity, particularly abdominal obesity, are considered as two potential risk factors for the occurrence of cardiovascular disease (2). The study of the other risk factors also revealed that the mean systolic and diastolic blood pressure, serum levels, and total cholesterol and triglyceride were significantly higher, but the HDL-C levels were significantly lower, in firefighters with MetS compared with those without MetS. In addition, the prevalence of the normal or abnormal values of the metabolic risk factors in the firefighters according to the NCEP/ATP III criteria in our study revealed that high WC, low HDL-C, and hypertriglyceridemia were the most common metabolic risk factors in the male firefighters. In a systematic review and meta-analysis, the most prevalent components of MetS in the general population were low HDL-C and hypertriglyceridemia (4). A previous study of police officers demonstrated that work-related stress through dyslipidemia (hypertriglyceridemia and low HDL-C) induced MetS (7) and was confirmed as an important underlying factor in cardiac events (8). A significant positive association between WC and triglyceride, as well as an adverse association between WC and HDL-C in our study, suggested that these factors may predict cardiovascular disease in the future.

In agreement with a previous study (14), a significant increase trend was shown by age groups in our study, as MetS increased from 14.9% in the group below 30 years to 85.1% in the group over 30 years. A negative association between age and HDL-C, as well as a positive association between triglyceride and blood pressure, suggested that increasing age was independently associated with cardiovascular disease. Lee and Kim (12) demonstrated that age and obesity were independent risk factors for metabolic syndrome in both firefighters and general workers.

Another result from our study was that work experience was effective in developing metabolic syndrome, as the prevalence of MetS increased in firefighters with work experience above 10 years. There is evidence that stressful conditions such as hard physical activity, impaired sleep rhythm, emotional stress, and environmental pollutants in occupations such as firefighting can cause cardiac events (11).

Our study has several limitations: The first limitation is that our survey was restricted to firefighting, and no other occupational groups were evaluated and compared.

Second, we did not collect data on the diet, physical activity, and shift the work of the participants. Therefore, given the cross-sectional design of the study, we could not discuss the causation of obesity, particularly abdominal obesity.

The findings showed that about one-third of the firefighters had MetS. Age, abdominal obesity, and dyslipidemia were independent risk factors for MetS in the firefighters, which may predict the incidence of cardiovascular disease in the future. Thus, efforts should be undertaken on the implementation of healthy lifestyle promotion programs for firefighters.