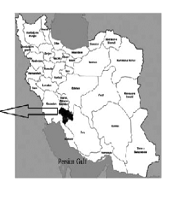 An Investigation of Natural Background Radiation and Health Risk Assessment in Kohgiluyeh and Boyer-Ahmad Province, Iran

The natural radiation, which comes from the environment, is one of the most important cancer risk sources.

This study aimed to measure the natural background radiations (BRs) and estimate the annual effective dose (AED), as well as the health risks in Kohgiluyeh and Boyer-Ahmad Province, Iran.

background radiations for both indoors and outdoors were measured using a Geiger-Muller detector (X5C plus) in eight cities. Five points were chosen in each city for the BR measurements, and in each point, five stations were randomly selected and measured.

The findings of the present study indicated that the average value of BR dose rates was higher than the global value. The reason can be due to the high exposure levels of hot springs, igneous rock, and high altitudes in Kohgiluyeh and Boyer-Ahmad Province.

The natural radiation, which comes from the environment, is one of the most important sources that affect the annually received human radiation dose (1). Although there are lots of sources for creating radiation, such as weapon tests and medical or agricultural use of radioisotopes, natural radiations are among the major contributors to human absorbed dose (2).

Ionizing radiation in nature comes from two different main sources. Some of these radiations are produced by natural radioactive material like 238U, 232Th, 222Ra, and 40K (2, 3), which come from hot springs, igneous rocks, and high thorium levels, which are found at the travertine deposits (1). The other main sources of BR are cosmic radiation (primary and secondary), terrestrial, and cosmogenic radiation (4, 5).

When primary cosmic particles (mostly protons) enter the atmospheric column, they produce high energy mesons, electrons, and other particles after interacting with its components, and then the secondary cosmic radiations will create (5, 6). Terrestrial radiation mostly results from naturally gamma rays radionuclides, and cosmogenic radiation presents the atmospheric reflection of radiation from man-made and terrestrial sources (5, 7).

At the Earth's surface, elevation, and latitude affect the dose rate from the cosmic radiation (8). In a study by Kowatari et al. (9), it was shown that increasing the altitude increased the neutron fluence as well as the dose rate. Apart from altitude, the concentrations of radionuclides also depend on the geographical and geological factors and vary from place to place (10). Therefore, the geographical characteristics have a decisive role in the distribution of BRs due to terrestrial radiation (8).

Natural radiation contributes to 94% of BR exposure in some developing countries such as Iran (1). There are some regions with high natural radiations. For example, the presence of numerous hot springs in Ramsar (Iran) cause high concentrations of radioactivity in this area (1). Furthermore, there are other regions in the world having high levels of BR, such as Kerala in India, Guarapari in Brazil, Xiazhuang in China, and Costal red sea in Egypt (1, 11, 12).

Natural irradiations create potential risks, such as enhancing the probability of cancer incidence for humans and other organisms; therefore, the BR measurement is one of the vital aspects of health physics (13, 14). Local information about the BRs is essential for controlling cancer incidence and treatment methods in the future.

Different types of building materials could be used for constructing buildings. Building walls can inhibit cosmetic and outdoor radiation. In addition, these materials could be a source of terrestrial radiation due to their natural radionuclide components (3). Therefore the BR assessment must be divided into indoor and outdoor measurements (15, 16).

Several studies have reported the measurement of BR levels to assess the population’s effective dose (1, 11, 12, 14, 17). However, as far as we are aware, there is no study investigating the BRs in Kohgiluyeh and Boyer-Ahmad Province.

The purpose of this study was to quantify the ambient gamma radiation, population effective dose, and cancer incident risk resulting from the BRs in this province. Furthermore, the relationship between the BR and altitude was evaluated in our study based on the outdoor mean dose rate.

3.1. Geography of the Study Area and Measurement Setup 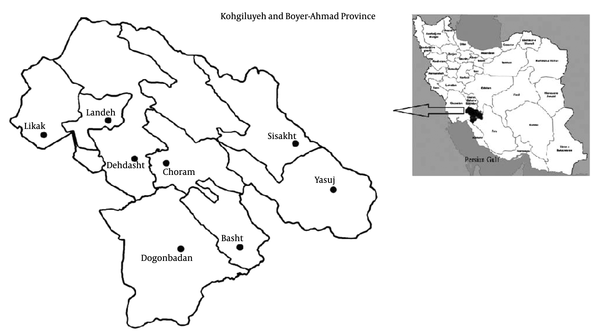 All measurements were made during daylight from October to December 2018. Five main areas (north, east, west, south, and center) were chosen for dose measurement in each city. Moreover, in each main point, five stations were randomly selected to measure the indoor and outdoor BRs’ doses. For measuring the outdoor, the dosimeter was set one meter above the ground surface and away from any buildings, about six meters, to diminish the effects of buildings on the radiation measurements. The total exposure time was 30 minutes for each measurement.

Where DIn is the mean gamma absorbed indoor dose, and DOut is the average absorbed indoor dose (nSv.h-1). OFs, which equal to 0.8 for indoors and 0.2 for outdoors, are the fractions of time spending. T and CCs are the time converter from hour to year (8760 h) and conversion coefficients (adults: 0.7, children: 0.8, and infants: 0.9), respectively (18).

Table 1. Represents the Cities Height and the Indoor and Outdoor Values of Dose Rates due to Gamma Background Radiation (nSv.h-1) 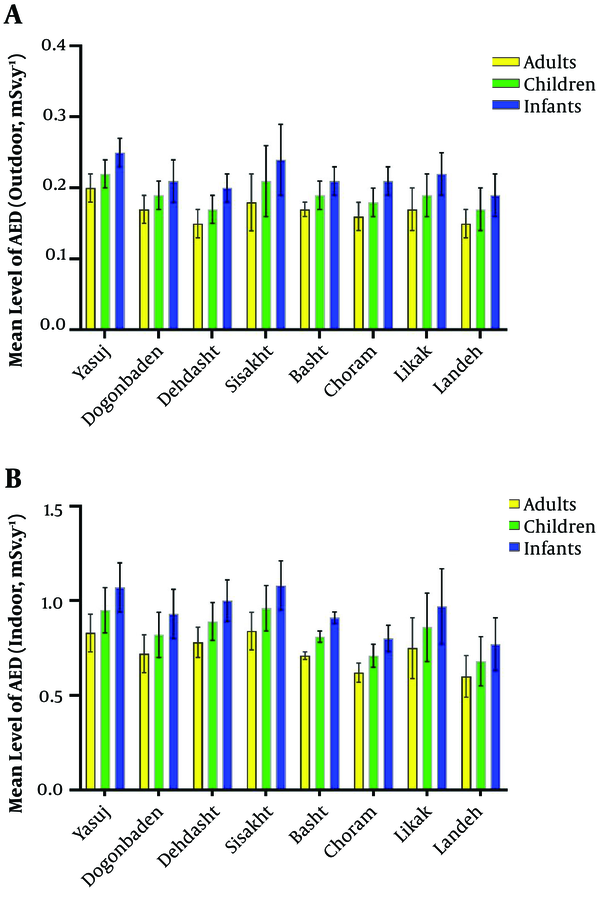 The mean ± SD values of AED for adults, children, and infants resulted from the outdoor (A) and indoor (B) BRs for eight cities (mSv.y-1)

Table 2 demonstrates the AEDs in some critical organs for adults, children and infants in eight cities (mSv.y-1), calculated according to the factors recommended by ICRP report (19). Based on Equation 3, the excess lifetime cancer risks and heritable effects risk for the indoor exposures are illustrated in Table 3. The excess lifetime cancer risks (averaged over all cities) to whole populations and adults were 4.6 and 3%, and the heritable effects risk for the aforementioned groups were 0.17 and 0.073 %, respectively. Figure 3 indicates the correlation between the altitude and the outdoor dose rate in the selected cities of Kohgiluyeh and Boyer-Ahmad Province with R2 = 0.659.

Table 2. The Mean ± SD Values of AED in Some Critical Organs for Adults, Children, and Infants at Eight Cities (mSv.y-1)
Table 3. The Excess Lifetime Cancer Risks and Heritable Effects Risks Based on the Indoor Exposures 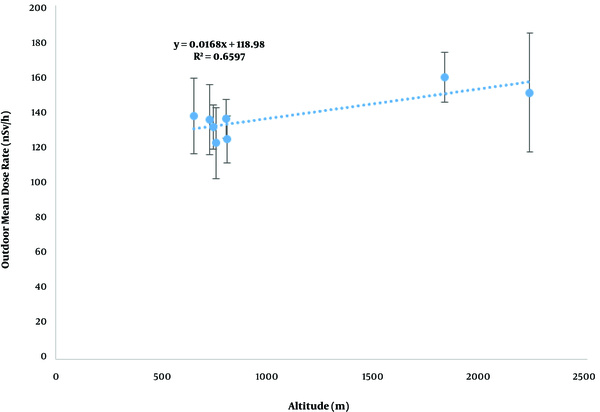 The interaction of ionizing radiation with tissues can cause harmful effects on human health and multiple complications such as DNA damages and an increase in secondary cancer risk (20, 21). Therefore, evaluations of BRs and calculation of the resulting health risks are of great importance. Many researchers are interested in measuring BRs all over the world (1, 11-14). Several studies have investigated gamma BRs in various cities of Iran (14, 17); however, to the best of our knowledge, there is no study about the measurement of BRs in Kohgiluyeh and Boyer-Ahmad Province. The aim of this study was to measure the gamma-ray dose rates, AED, health risks, as well as the relationship between the BR and altitude in the environment of this province.

Our measurements showed that the average outdoor dose rate was about 136.9 ± 12.5. The UNSCEAR 2000 reported various dose rate values from different countries with an average value equal to 59 nSv.h-1, with a range of 18-93 nSv.h-1 for outdoor exposures (18). Our results indicated a considerably higher outdoor dose rate than the global dose rate value, probably due to the high exposure levels of hot springs, igneous rock, and high altitudes in these areas. 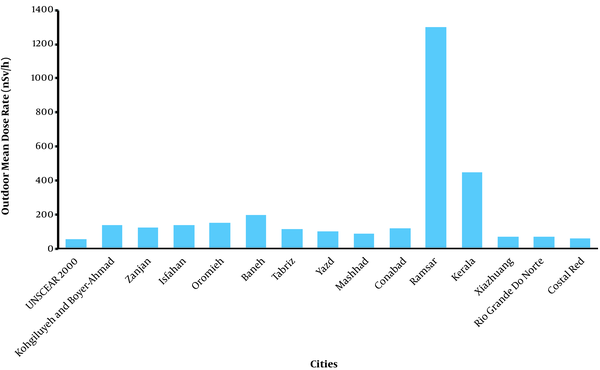 Regarding our results, the average indoor dose rate (149.3 ± 19.8 nSv.h-1) showed significantly high values compared with those reported by UNSCEAR 2000 with a mean of 84 nSv.h-1 in the range of 20-200 nSv.h-1. The mean indoor dose rate value for some countries such as Italy, Spain, and Sweden were 105, 110, 110 nSv.h-1, respectively (18), which are lower than our investigated province. Higher indoor dose rates depended on the type of building materials and also probably on the wider use of stone or masonry materials (24, 25).

The collective AEDs (indoor and outdoor) for the three groups, including adults, children, and infants, were 0.9, 1.03, and 1.16 mSv.y-1, respectively, which were higher than the worldwide mean value (0.48 mSv.y-1) (18), so it is noticeable that due to the potential health risks, it will be a good idea to conduct epidemiological research studies on BRs related to health problems for the local/indigenous population in the three groups in this province.

Table 2 demonstrates the AEDs for some critical organs. It is clear that the risk of cancer incidence in Yasuj and Sisakht cities is higher than in the rest of the cities. Moreover, Table 3 shows that the higher values of the excess lifetime cancer risks and heritable effects risk for the indoor exposures belong to Yasuj and Sisakht cities because these cities have higher outdoor and indoor dose rates, respectively.

The variation of BR measurements is affected by altitude, latitude, and distribution of radionuclides (13, 26). Also, there are some studies that have shown that there is a linear correlation between the altitude and the AED values of BR (26, 27). We investigated the correlation between the altitude and the outdoor dose rate because the indoor dose rates can be affected by different shields around the houses. In the current study, the R2 between the altitude and the outdoor dose rate was 0.659 (Figure 3). Kowatari et al. (9), expressed that the neutron fluence and dose rate were related to the altitude, which means the dose rate increased with increasing height. Also, they showed this relation in an exponential curve. In another study, Goldhagen et al. (23) simulated and measured the neutrons’ energy spectrum of cosmic-ray induced aboard a high-altitude airplane. They reported that high altitude has the dominant variable affecting neutron fluence rate. Hence altitude has a crucial role in the contribution percentage of direct ionization (such as electron and alpha) (28). The high correlation between the altitude and BR in our study may be due to the higher existence of radionuclides in the mountain ranges and also the fact that increasing the altitude leads to higher cosmic rays because the atmosphere is thinner in places with higher altitudes. As future research, it is suggested that more research should be done to investigate this topic by gamma spectrometry of soil samples of this region in different months.

Given the findings of the current study, the obtained BR dose rates were considerably higher than the global dose rate value. This can be due to the high exposure levels of hot springs, igneous rock, and high altitudes. The present study can provide a valuable reference for the design and development of specific regional surveys related to the measurement of natural BR in the southwest of Iran.

The authors would like to thank the financial support of Yasuj University of Medical Sciences for this project.

Copyright © 2020, Annals of Military and Health Sciences Research. This is an open-access article distributed under the terms of the Creative Commons Attribution-NonCommercial 4.0 International License (http://creativecommons.org/licenses/by-nc/4.0/) which permits copy and redistribute the material just in noncommercial usages, provided the original work is properly cited.
download pdf 1,008.02 KB Peer Review Comments ( 175.02 KB) Get Permission (article level) Import into EndNote Import into BibTex
Number of Comments: 0