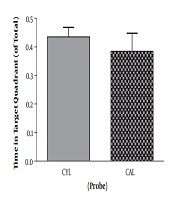 Effects of Sleep Deprivation in Young and Adult Rats: An Assessment of Memory and Anxiety

As an important issue, sleep deprivation influences the cognition and mood of society. It both causes different effects on various individuals and age groups. However, the effects on various age groups are not well studied. The present study, which used a rat model of sleep deprivation, investigated the learning and memory status of sleep-deprived (SD) rats. Two groups of young and adult rats underwent 96 h of REM sleep deprivation by the inverted flowerpot method. Control groups were in the same condition but were could sleep normally. In behavioral groups, anxiety was assessed by an elevated plus-maze. Six weeks later, spatial memory was evaluated using the Morris water maze, and fear memory was assessed by passive avoidance learning. Based on the findings, SD increases anxiety in young rats. Regarding the spatial memory, young SD rats showed impairment in retrieval, but adult SD rats failed to learn the task as effectively as the controls. Memory retrieval in the passive avoidance task was impaired only in the adult SD rats. A different stage of memory affected by sleep deprivation in young and adult rats reflected varying mechanisms in these two age groups.

Having normal sleeping periods significantly affects the rapid eye movement (REM) and non-REM (NREM) and has an important role in physiologic and cognitive functions (1). Experiments on the total- NREM- and REM-sleep deprivation have shown disturbances in various functions, and several studies have specifically revealed the correlation between REM deprivation and hippocampal plasticity, neurogenesis, and cognitive impairments (1, 2). Depending on when sleep deprivation (SD) has occurred, concerning the learning and memory task, SD can influence memory stages of acquisition, consolidation, and retrieval. For example, before learning a task, the SD can impair memory acquisition, while after learning, it causes problems for consolidation (3). Using 72 h of SD before learning in rats, a study has evaluated cued and contextual fear memory and reported impairment only in the context fear memory task (4). This suggests that SD selectively interferes with hippocampal memory. Further evidence is provided by a report which showed that 96h of REM SD impaired the contextual fear memory. However, it was not correlated with glucocorticoid levels (5). The effect of SD on the hippocampus in SD rodents is further confirmed by studies that used spatial memory tasks. Mice sleep-deprived for 6h after training were failed to discriminate relocated objects 24 h after the learning session (6, 7). Spatial memory assessment using the Morris water maze also confirmed the effects of REM SD on different phases of memory (8, 9).

Although SD is widely investigated in various populations of rodents with different ages, few studies have compared SD effects in young and older rats (10, 11). A difference in cognitive functions between young and adult rats has raised possible discrepancies in response to the SD.

The present study aimed to investigate the effects of SD on young and adult rats by evaluating memory and anxiety tasks following the REM sleep deprivation.

Male Wistar rats were prepared from the animal lab in the Neuroscience Research center, Shahid Beheshti University of Medical Sciences. The “young” and “adult” groups consisted of 1 and 14 month-old rats (8 rats in each group). There were 4 animals in each cage, and cage-mates were kept together throughout the study. Rats had free access to food and water. Experiments were performed following the recommendations from the Declaration of Helsinki and the internationally accepted principles for the experimental use of rats.

To apply REM deprivation, the flowerpot method was used (12). The Plexiglas box (60 × 100 × 40 cm) consisted of 15 platforms standing 10 cm above the floor of the box. The tank was filled up to around 9 cm. The box was placed in a quiet room with lights on at 7 AM and off at 7 PM. REM SD started at 5 PM. Rats in the same cages were placed on the platform to avoid social isolation stress. SD was conducted for 96 h, which is a long term SD. For control groups, a wire mesh was fixed on the surface of platforms so that sleeping rats would not contact water upon loss of muscle tone (i.e., occurrence of REM sleep). Experimental groups were assigned as Control and REM-deprived young and adult rats (CYN/RYN and CAN/RAN, respectively). Anxiety studies were done after completion of the SD, but spatial and passive avoidance learning was performed six weeks after completion of SD.

The elevated plus maze (EPM) was used to assess the anxiety level. The maze had two open and two closed arms. The rats were placed on the center of the maze, and the number of transitions to the open arms and time spent in the open arms was recorded for between-groups comparisons.

The water maze used in this research was a dark circular pool with a diameter and height of 150 cm and 60 cm, respectively, which was filled with a water depth of 45 cm. A Plexiglas with 11 cm diameter, which was adjusted 2 cm below the water surface, was considered as the escape platform. Swimming was recorded by a CCD camera (Panasonic Inc., Japan), and the locomotion track was followed by a video tracking system for automated analysis of animals’ behavior using the Ethovision software (version XT7, Netherlands).

To familiarize the animals with the test environment, the day before training, rats were placed in a water tank without a platform to swim for 60 seconds.

Data are described as mean ± SEM. To compare rates in the experimental groups, the unpaired student’s t-test was used. A P value of less than 0.05 was considered statistically significant. 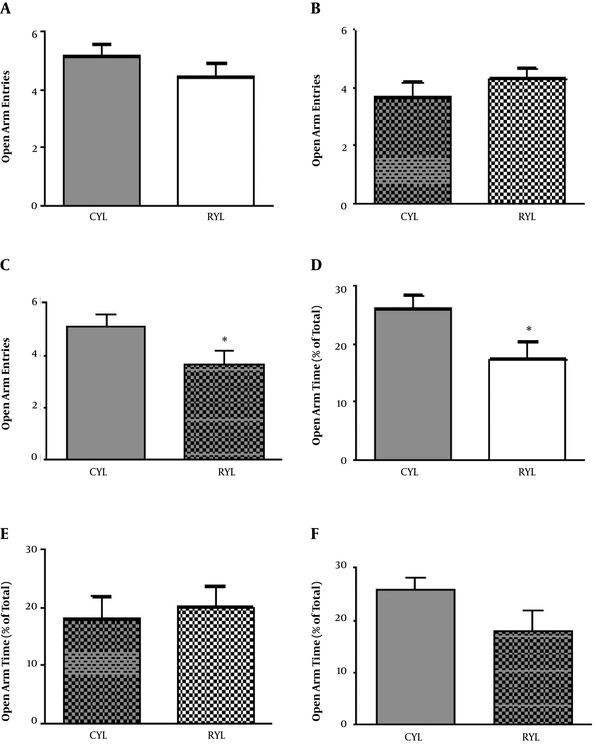 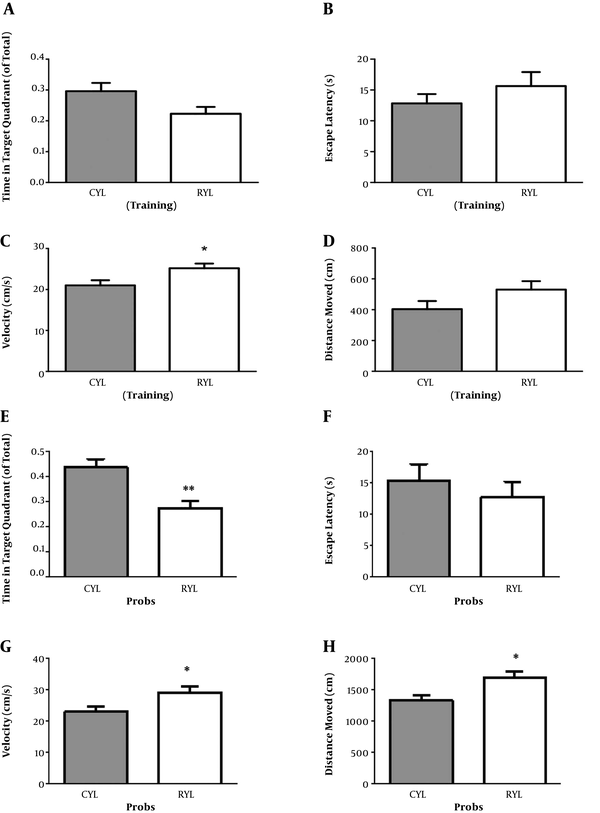 Table 1. The Results Training and Probe Phase of MWM Test in Adult Ratsa 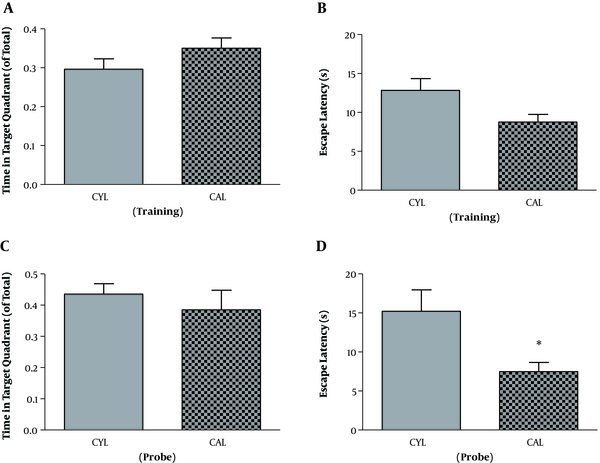 For further evaluation of learning and memory in the chronic phase of SD, the passive avoidance task was engaged. In the training session, animals were compared based on the number of training trials (that is, receiving electric shock) required for avoiding the dark chamber in the verification trial. However, no significant different was found regarding this parameter between SD and control groups either in young (t13 = 0.98, P = 0.34) or adult rats (t11 = 0.97, P = 0.34) (Table 2). A day after training, memory retention was assessed and revealed that young SD rats entered the dark chamber with a similar latency compared to the control ones (t13 = 0.49, P = 0.62). Again, the time spent in the dark chamber was not different between the groups (t13 = 0.10, P = 0.91). Although adult SD rats showed no change regarding the step-through latency (t11 = 0.69, P = 0.50), they stayed in the dark chamber significantly more than control rats (t11 = 2.56, P = 0.02).

The present study investigated the effects of REM sleep deprivation on learning and memory in two populations of young and adult rats, and it was found that young sleep-deprived rats failed to recall spatial reference memory as effectively as the control group. Adult rats, on the other hand, showed failure in learning the spatial task.

The exact amount of sleep required for the nervous system is not yet clarified, and evidence regarding the impacts of sleep regulations on various functions of the nervous system, including cognition and emotion, are not sufficient (1, 3, 13-15). According to the experiments, total REM or non-REM SD or targeted deprivation have different effects on the nervous system (11). For instance, it has been suggested that REM deprivation reduces neurogenesis, but total SD results in the impaired differentiation of newborn neurons (16). An important consideration in investigations regarding the impacts of SD in young versus aged is the well-known fact that in older individuals, sleep tends to be reduced and fragmented (17). This could render young individuals more vulnerable to the impairments in sleep and thus can be used in explaining why some behavioral and histological aspects might remain relatively unaffected in adults compared to young rats.

The elevated plus-maze was used to evaluate anxiety in the acute phase after completion of the SD. Only young SD rats showed a decrease in open arm time, which indicates increased anxiety. Meanwhile, adult SD rats did not show increased anxiety. Since Memory tasks in this study were performed in the chronic phase, comparing the anxiety and memory performance would not be reliable. The within-comparison of the control groups revealed that adult rats entered the open arms less frequently than young ones. This suggests higher levels of anxiety in adult rats, but it should be noted that old animals have a lower tendency for locomotion, a condition known as bradykinesia in humans (18).

Several studies have mentioned to detrimental effects of SD on learning and memory (5). It appears that the timing of SD with respect to memory assessment has important consequences for the outcome. It’s proved that prior to training in a memory task, the SD impairs acquisition, while after training, it interferes with consolidation (1). A spatial working memory task acutely after SD revealed that even 6 - 12 h of SD could disrupt working memory (19). In contrast, in our study, the SD was long-term and well before the learning and memory tasks. When performing an immediate assessment of memory following SD, many factors that play a role in the acute phase can influence memory performance. Since SD tends to influence mainly hippocampal-dependent memory tasks, it can be argued that the hippocampus-specific features, for example, neurogenesis, change in response to SD (20). In our study, a long-term SD of 96 h was applied, and learning and memory tests were conducted 6 weeks after the SD. This period was chosen based on the involvement of newborn neurons in the DG circuitry. For a newly proliferated granule cell, it takes around 6 weeks to show functional activity in DG (21). Therefore, neurons that have been proliferated during SD would become functional by the time of memory assessments. As a consequence, if neurogenesis is reduced following SD, DG circuitry could be impaired as well, which can be reflected in DG-related memory functions.

In passive avoidance learning (PAL), the acquisition phase was not affected in either young or adult rats. On the other hand, retrieval was impaired in adult rats. It should be mentioned that PAL is associative learning that involves the hippocampus, though less than MWM (22). It has been shown that SD tends to impair mainly hippocampal-dependent tasks (4, 23).

In this study, a within comparison of young and adult control groups was performed. Interestingly, adult control rats showed better results regarding the MWM and PAL retrieval phases. On the other hand, their anxiety levels were higher compared to the younger rats. A study reported that mild stress has special beneficial effects on learning and memory of adult rats (24). In a task like MWM, cognitive and physical abilities are important (26). The adult rats in this study were not too aged to show a deficiency in cognitive tasks, yet were physically comparable or even superior to young individuals.

In conclusion, the findings suggest that SD impairs memory consolidation and/or retrieval in young rats, and has negative consequences for the acquisition in the adult rats.

The authors would like to thank Prof. Fereshteh Motamedi for her kind cooperation.

Copyright © 2020, Annals of Military and Health Sciences Research. This is an open-access article distributed under the terms of the Creative Commons Attribution-NonCommercial 4.0 International License (http://creativecommons.org/licenses/by-nc/4.0/) which permits copy and redistribute the material just in noncommercial usages, provided the original work is properly cited.
download pdf 625.63 KB Peer Review Comments ( 152.40 KB) Get Permission (article level) Import into EndNote Import into BibTex
Number of Comments: 0