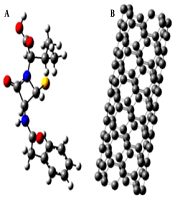 This research intended to evaluate the adsorption of single-walled carbon nanotubes (SCNT) with penicillin (G) antibiotic agent at the B3LYP/6-31G (d) theoretical level.

First, we optimized penicillin (G) antibiotic and SCNT structures using the Gaussian program. Next, ten complexes with negative binding energy and steady-state than other cases were calculated using the molecular docking method and its ranking algorithm. Then, graphene was used to perform molecular orbitals calculations for the most stable configurations. Finally, binding energy and thermodynamic parameters were calculated at 298 K and 1 atm.

According to the findings, the adsorption of penicillin (G) antibiotic on the surface of carbon nanotubes was an exothermic, spontaneous process.

This study indicated the ability of SCNT, as a sensing material, to construct thermal and electrochemical sensors for penicillin (G) determination.

One of the most important medical discoveries of the 20th century is the discovery of penicillin by Fleming in 1929. Although penicillin significantly reduced mortality and morbidity due to common infections, antibiotic-resistant bacteria were quickly observed in laboratories and shortly after (1) in clinical medicine (2).

The excessive use of antibiotics such as penicillin (G), which are among the most widely used antibiotics in Iran, has caused them to appear in the wastewater entering refineries upon defecation from the host’s body (3), causing many problems in the environment. High concentrations of antibiotics in the wastewater produced by antibiotic production companies and hospitals can interfere with the biological refinement of wastewater. On the other hand, these pollutants appear in groundwater resources by the penetration of hospital wastewater and pharmaceutical wastes into these reservoirs and are not generally removed through basic refinery processes such as sedimentation pools and chlorination due to their solubility in water. With the growing population in large cities, there has also been an increase in drinking water contamination (4, 5).

Therefore, it seems necessary to conduct research on penicillin (G) detection. In this regard, single-layered nanotubes are among the nano-devices that significantly influence the sensitivity of biosensors. Besides, carbon nanotubes (CN), because of their unique features, are commonly used as nano-sensors. Sensors are capable of detecting and altering the measurable physical properties that are generated by electrical signals (6). Accordingly, we aimed to investigate the interaction of penicillin (G) with CN using computational chemistry and molecular docking. By evaluating thermodynamic parameters and the amount of heat generated by penicillin (G) absorption based on these calculations, we checked if this nanostructure can be used in designing penicillin (G) biosensors. For this purpose, Gauss View software was used to design a carbon nanotube penicillin (G) sensor (4). To bring the systems close to the minimum level of energy, the systems were first optimized geometrically using Gaussian software applying the HF technique (the 6-31G basis set). The physical properties of the systems were assessed after calculations by the Auto Dock Tools software, and their stability, electrical changes, and physicochemical properties were calculated and compared. Finally, the most stable interactional states between the nanotubes and penicillin (G) were detected (7, 8) (Figure 1). 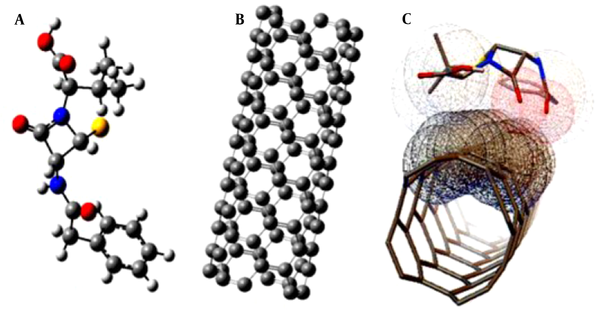 First, the structures of penicillin and CN were drawn using nanotube modeler 1.3.0.3 and Gauss view 5.0 software (9). Next, geometric optimization was performed using the density function theory method at B3LYP / 6-31G (d) computational level based on the positive results of previous studies. The Gaussian software 10 was used to perform calculations at the temperature of 298 K and a pressure of 1 atmosphere. Afterwards, Auto Dock Tools software (Auto Dock, version 4.2) was used (10). A total of ten conformation models were generated using the Auto Dock, indicating best models to predict the interaction between the antibiotic and the CN. In addition, a series of energy values (binding energy, ligand efficiency; inhibition constant; intermolecular energy; Van der Waals, electrostatic, and total internal energy) were generated using the Lamarckian program (Trott and Olson, 2009) (10).

The docking method and Auto Dock software were used to select the most stable configuration of penicillin (G) with nanotubes (Figure 2). This figure is according to the states ranking based on the coherence energy (Table 1).

The energy changes were negative for penicillin (G) derivatives with carbon nanotube (Table 1 and Figure 3), indicating the exothermic value of the adsorption process. Hence, it can be argued that physical adsorption of penicillin (G) can interact with CN, indicating its potential to be administered in the construction of new thermal sensors intended to measure penicillin (G) (11). Temperature measurement process of theses sensors is based on a highly accurate and sensitive thermistor, which can be administered to evaluate the amount of analytes (12).

Figure 3. The results of docking for P CNT

According to chemistry literature, HOMO and LUMO are the highest and lowest empty or unoccupied molecular orbital, respectively. The energy gap is the energy difference between the two orbitals, often denoted by the HLG symbol. Equation 2 is developed to calculate the energy gap, where EH and EL indicate the energies of Homo and Lomo orbitals, respectively. The electrical conductivity of the molecules directly affects the energy gap (1). The lower the energy gap, the more efficiently the electron pass from the forbidden band and into the conduction band (13). Hence, materials with lower energy gaps have higher electrical conductivity in comparison to those with higher energy gaps.

Table 2. Energy Values of HOMO and LUMO Orbitals, Energy Gap, Chemical Potential, Chemical Hardness, Electrophilicity, Maximum Load Transferred to the System and Dipole Moment for Penicillin (G), and the Most Stable Conformation of Their Derivatives with CNT

The other important parameter is chemical hardness (η), which can be obtained using Equation 3. It is an appropriate parameter to evaluate the reactivity of a new compound, mainly due to the fact that softer molecules with lower chemical hardness can alter their electron density. Hence, soft compounds have the advantage of better and easier electron transfer, which is vital for chemical reactions. Table 2 shows the enhanced adsorption on CN following reactivity of penicillin (G), as all derivatives produced using interaction with CN have lower chemical hardness compared to pure penicillin (G).

We also investigated the bipolar moment of the structures, which is an appropriate criterion for assessing molecules' solubility in polar solvents (17). Molecules with higher dipole moments show better solubility in water and vice versa (18). According to the findings, following adsorption on the surface of pure CN, the dipole moment of penicillin (G) increased (9). Hence, CN derivatives with penicillin (G) are more water-soluble in comparison to the penicillin (G) (19) (Table 2 and Figure 4). 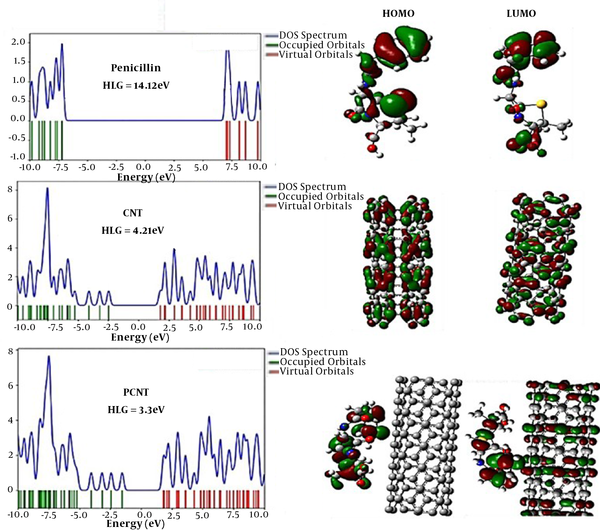 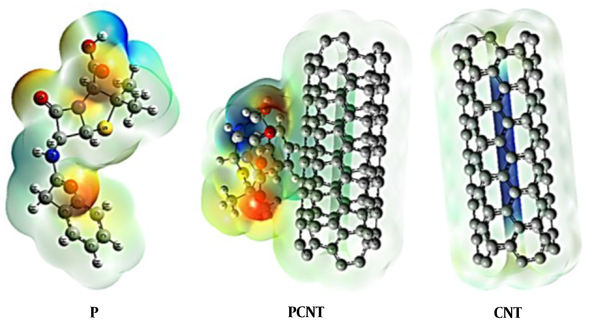 Figure 5. Map of a molecule or electrostatic potential (ESP) surface illustrates the partial distribution of change along the molecule’s surface. These maps are important because they help describe molecular polarity and place the dipole arrow. The ESP surface will be produced, red areas indicating negative poles and blue areas indicating positive poles.