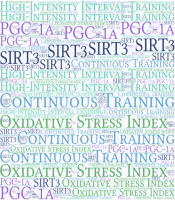 The PGC-1α protein is strongly affected by changes in SIRT3, and upregulation of SIRT3 increases the mitochondrial biogenesis. Due to the role of the mitochondria as the main organelles in energy production, its dysfunction (decrease in energy storage and mitochondrial-mediated apoptosis) may be involved in the development of degenerative diseases such as s arcopenia (severe loss of muscle mass). Therefore, mitochondrial dysfunction is closely related to cell death and consequently reduced life expectancy. Affecting PGC-1α and SIRT3, exercise and calorie restriction increase the processes related to mitochondrial biogenesis and decrease reactive oxygen species (ROS) production (1).

SIRT3 is a member of NAD+-dependent deacetylase family proteins (2), regulating several cellular activities such as metabolic homeostasis (3) and principal cellular responses (3). SIRT3 increases cellular respiration while reducing the production of ROS (4). Ahn et al. indicated that SIRT3 regulated mitochondrial oxidative capacity (1), which is associated with mitochondrial-mediated protection against apoptosis (5). These results support the possibility of exercise-induced mitochondrial oxidative capacity and mitochondrial-mediated apoptosis in skeletal muscle (6), suggesting that SIRT3 is associated with cell longevity.

On the other side, PGC1α regulates genes involved in determining the type of muscle fiber (7). It also protects muscles against atrophy (8). Calorie restriction and exercise increase the expression of PGC1-α and SIRT3 (9). They also reduce cellular energy levels and increase NAD+ levels. Since SIRT3 is NAD+-dependent, such conditions increase the activity of SIRT3 and its downstream targets (9).

This theorem proves that endurance exercises regularly create adaptation in the cardiovascular and muscular systems. The most important intracellular response to endurance exercises is an increase in the number and size of mitochondria. This situation increases the activity of oxidative enzymes in muscle cells (10).

Turning to the authors’ previous research (11, 12), continuous swimming (CT) and high-intensity interval swimming (HIIT) significantly increase the amount of PGC-1α in slow-twitch skeletal muscles soleus (SOL); however, the consequences of upregulation in PGC-1α are not totally understood and calls for more molecular research.

The authors also showed that CT and HIIT significantly increased the levels of the SIRT3 protein in slow-twitch muscle (SOL) (11, 12).

In our previous studies, a non-significant increase in reduced glutathione/oxidized glutathione (GSH: GSS) was observed in SOL muscles following HIIT exercise (11, 12). It can be related to various factors, including ROS produced by exercise and its measurement time. This phenomenon indicates the ability of the antioxidant system in SOL to maintain the balance of intracellular oxidative stress (13). This ability could be attributed to the greater compatibility of slow-twitch muscles with these two types of training, where the expression of the protein associated with the longevity and the antioxidant system of these muscles is further improved, and more free radicals produced by aerobic oxidation within the mitochondria are further neutralized.

Our previous findings (11, 12) suggest that 2 important proteins involved in mitochondrial biogenesis (PGC-1α and SIRT3) increase significantly following both HIIT and CT training in slow-twitch muscle tissue, which could potentially improve cell longevity. No significant increase in the GSH: GSSG level was also observed in SOL muscles following both exercises (CT and HIIT). This indicates the effect of both exercises on improving the oxidative capacity of SOL muscle fibers. Thus, HIIT exercise can be as effective as CT in improving mitochondrial biogenesis of muscle tissue, creating aerobic adaptations, increasing oxidative capacity, cell health, and ultimately longevity and preventing aging. Therefore, it can be a good alternative to traditional endurance training.

Copyright © 2022, Annals of Military and Health Sciences Research. This is an open-access article distributed under the terms of the Creative Commons Attribution-NonCommercial 4.0 International License (http://creativecommons.org/licenses/by-nc/4.0/) which permits copy and redistribute the material just in noncommercial usages, provided the original work is properly cited.
download pdf 97.42 KB Get Permission (article level) Import into EndNote Import into BibTex
Number of Comments: 0