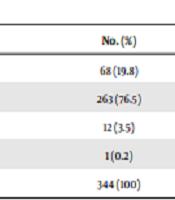 One of the biggest global challenges of the 21st century is the increasing burden of non-communicable (chronic) diseases.

Considering the high prevalence of systemic and musculoskeletal diseases and the need for further epidemiological studies to provide health programs, we conducted this research.

In this cross-sectional study, a total of 344 primary school children referred to the East Tehran Health Center and examined during a certain period of the autumn of 2019 were enrolled. Demographic information and history of systemic diseases were collected using a questionnaire. Height and weight measurements and feet and spine examinations were performed by the researcher.

Screening programs are recommended from an early age to prevent diseases. To reduce the rate of musculoskeletal disorders and obesity in children, identifying and following them in the early stages of the disorders is recommended for early diagnosis and appropriate treatment.

The increasing burden of non-communicable (chronic) diseases is one of the biggest global challenges of the 21st century (1). About two-thirds of deaths globally occur due to such diseases, more than 80% of which occur in low- and middle-income countries (2).

Obesity is the result of a long-term imbalance between energy intake and output in the body, during which the energy entering the body is greater than the energy consumed. In addition to long-term medical complications, childhood obesity may cause psychosocial problems, such as low self-esteem, depression, and poor quality of life (3).

One of the concerns of the parents of obese children is “micropenis,” which should be considered (4, 5).

Obese children are at higher risk for other chronic conditions such as asthma, sleep apnea, bone, and joint problems, type 2 diabetes, and risk factors for cardiovascular diseases. Generally, a child is more likely to be obese if he/she has bigger arms, thigh, and abdomen, becomes short of breath after the slightest physical activity, or is unable to physically compete with other children of the same age (3).

A review of the literature shows the high prevalence of postural abnormalities in Iran, which is higher among middle- and high-school students due to the lack of adequate knowledge and training, as well as a sedentary lifestyle. However, this issue has been less evaluated in children (6).

Flatfeet are one of the most common musculoskeletal disorders, in which the longitudinal arch of the foot is reduced, and in severe cases, the inner side of the sole comes into contact with the ground. Flatfeet are generally divided into 2 types: (1) flexible flatfoot, and (2) rigid flatfoot (6).

Obviously, the earlier a diagnosis and therapeutic measures take place, the more short- and long-term benefits they will have. To manage this group of disorders, it is necessary to study its prevalence among children to estimate their current level of health, discover the critical points of disease in childhood, and provide an opportunity to estimate appropriate preventive and therapeutic measures at the beginning of life.

Some studies have examined these complications. For example, Karimian et al in a descriptive-correlational study on 148 children in Fasa City showed that non-standard facilities and equipment, such as backpacks, school desks, and the lack of specialists in prevention and treatment, have led to the prevalence of these disorders (7).

In a cross-sectional study conducted by Zakeri et al (2014) in Abadan, Iran, the prevalence of musculoskeletal disorders in primary school students was evaluated, in which 383 primary school students were randomly selected and studied. The most prevalent skeletal disorder observed in both females and males was scoliosis (85.4%), followed by drooping shoulders (81.7%). Flat back (1.6%) was the less common skeletal disorder. Also, head forward, genu valgus, and hallux valgus were significantly higher in girls than boys. The prevalence of flatfeet in the total population was 22.5% (9).

Due to the importance of this subject for further prevention and comprehensive evaluation of musculoskeletal disorders, we conducted this study.

In this cross-sectional study, a total of 344 preschool children referred to the East Tehran Health Screening Center in 2020 were selected by a simple sampling method.

Inclusion criteria were all children between the ages of 5 to 7 referred for screening.

There were no exclusion criteria.

In this study, all preschool children referred to East Tehran Health Center were examined during a certain period of time in the fall of 2020. This descriptive cross-sectional study was performed for the purpose of screening.

Evaluation of head forward, drooping shoulders, flat back, scoliosis, thoracic kyphosis, lordosis, genu valgus, genu varus, flatfoot, and hallux valgus was performed using instruments such as plumb line, checkerboard, mirror box, and questionnaire of personal characteristics. Examinations of the sole for flatfeet and the spine for scoliosis and kyphosis were performed in the presence of parents; a physician measured and recorded the weight and height of children, as well as answered the questions about the musculoskeletal disorders. The rest of the health questionnaire, including demographic information and systemic disease records, was filled out by the physician based on parental statements.

To describe the qualitative variables, the data obtained to answer the research questions and hypotheses were analyzed using SPSS (SPSS Inc, Chicago, Ill, USA) to calculate the frequency and percentage. To show the relationship between the prevalence of diseases and demographic variables, the chi-square or t test was used.

The Ethics Committee of Tehran University of Medical Sciences approved this study (IR.TUMS.IKHC.REC.1398.174).

The frequency of variables and their relationship with demographic information are as follows:

The frequency and percentage distribution of the age of the patients are shown in Table 1.

A group of known social, environmental, behavioral, and underlying (hereditary) risk factors are observed in these diseases, increasing the likelihood of disease or damage. If modifiable risk factors are eliminated or controlled, a percentage of such disorders and disabilities can be prevented.

In the study by Zakeri et al, the most prevalent skeletal disorder observed in both females and males was scoliosis (85.4%), followed by drooping shoulders (81.7%). Flat back (1.6%) was the less common skeletal disorder. Also, head forward, genu valgus, and hallux valgus were significantly higher in girls than boys. The prevalence of flatfoot in the total population was 22.5% (9).

In a cross-sectional study, Larrañaga et al estimated the prevalence of overweight and obesity. In this study, 55.4% of the population was obese, which included 6% of boys and 4.7% of girls, and the highest obesity rates were seen in the 11 to 14-year-old group of boys (7.2%) and the 4 to 6-year-old group of girls (12.5%). The prevalence of obesity was higher in the less privileged socioeconomic strata (6.9% vs. 5.2%) for both boys and girls (12).

A total of 19.5% suffered from overweight and obesity, and the importance of addressing this health issue is obvious (9).

Due to the high prevalence of musculoskeletal disorders (especially flatfoot) and obesity in preschool children, screening programs with more detailed examinations are recommended for the prevention and early diagnosis of this disorder (10). In order to reduce the rate of musculoskeletal disorders and obesity in children, identifying and following them in the early stages of the disorders seem to be a necessary solution for early diagnosis, appropriate treatment, and recovery of children. Also, more detailed investigations, such as determining the degree of flatfoot (mild, moderate, and severe) and the resulting physical problems, as well as factors affecting childhood obesity, are recommended for future studies.

In this study, 344 preschool children referred to the East Tehran Health Center in 2020 were examined for the prevalence of musculoskeletal disorders.

We thank the personnel of the Physical Medicine and Rehabilitation Clinic in Imam Khomeini Hospital, Tehran, Iran, who helped us in performing this study.