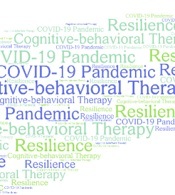 The onset of the COVID-19 outbreak brought unprecedented psychological and emotional consequences, especially for recovered patients, so resiliency in disasters could be helpful.

The present study was conducted to evaluate the effectiveness of cognitive-behavioral therapy (CBT) in the increasing resilience of recovered COVID-19 patients at the peak of the pandemic.

This research was quasi-experimental with a pretest-posttest design and control group. The statistical population of this study included all recovered COVID-19 patients with a mean age of 33.06 years at the peak of the pandemic in Isfahan (N = 30) in 2021-2022. They were selected by purposive sampling and randomly assigned to experimental and control groups (15 subjects in each group). After performing the pretest, the experimental group received a CBT program for 12 sessions, and then the post-test was performed. The required data were collected using the Connor-Davidson Resilience Scale (CD-RISC; 2003).

The obtained data were analyzed using descriptive statistics (mean and SD) and inferential statistics (analysis of covariance [ANCOVA]) using SPSS version 20. The findings showed that CBT led to increased resilience and had a significant effect on the experimental group (P < 0.01).

CBT can be considered an effective treatment in reducing problems and improving the psychological indicators of recovered COVID-19 patients.

Coronaviruses are a large family of viruses that cause respiratory diseases ranging from a common cold to more severe illnesses such as MERS, SARS, and COVID-19 (caused by the most recently discovered coronavirus) (1, 2). Underlying factors causing COVID-19 (including ease of transmission, insecurity among the global population, delayed testing, limited medical equipment, and uncertainty about the course of the pandemic) and general anxiety level indicate the significance of investigating the issue (3). In addition, based on the psychology in the last decade and with the advent of positive psychology, theorists and researchers point to structures such as self-control, spirituality, happiness, optimism, hope, well-being, and resilience rather than focusing only on negative experiences or perceptions (4). Another important issue in mental health psychology is resilience, which has come to the fore in recent years. Connor and Davidson describe resilience as an individual’s ability to establish bio-psychological balance in dangerous conditions. They do not consider resilience to be merely resistance to threatening conditions, but they believe that the individual’s active participation in the environment is important (5). Determining the factors that have acted as resilience factors regarding individual, family, and social characteristics is one of the interests of resilience researchers (6). Resilience is a psychological concept dealing with the ability to adapt the level of control to the level of environmental conditions. The central core of the resilience construct is the assumption that there is a “biological nature” to growth and perfection in every human being (for example, the self-modification nature of the human organism) that can be revealed naturally and under certain environmental conditions (7). Research has also shown that resilience affects health and thus improves health conditions during the COVID-19 period in China (8). Since mental health has significantly declined and received the attention of researchers during the COVID-19, the high prevalence of depression, sleep disorders, and post-traumatic stress disorder (PTSD) has been reported at the peak of the disease in China (9). The symptoms of psychological distress are expected to be long-lasting, thus necessitating evidence-based psychological therapies aiming at immediate stress relief and prevention of psychological disorders in this population. The research background of cognitive-behavioral therapy (CBT) has been shown to be effective in treating and preventing several stress-related disorders in the human population (10). The CBT group therapy is one of the most widely used methods and one of the most important choices in the field of psychological treatment of this disorder. This treatment uses 4 components: exposure, response prevention (REP), the relationship between the events and thoughts, and recognition of maladaptive thoughts; thus, it can improve feeling and behavior by changing cognition. Research has shown the effectiveness of CBT in resilience (11), mental health and components of event impact (10), and anxiety (12).

Given the above-mentioned materials, the present study addresses the question of whether CBT affects the resilience of recovered COVID-19 patients at the peak of the pandemic.

The present research is among applied designs in terms of the purpose. It is also among quasi-experimental designs of pretest-posttest type with a control group in terms of the method; in such designs, it is impossible to randomly select the subjects, and only the assignment is randomly performed in the groups. Sample subjects were randomly assigned to experimental (CBT group therapy) and control groups, and group therapy was performed. The questionnaires performed in the pretest and post-test stages in the 2 groups were statistically analyzed using SPSS version 20 (SPSS Inc, Chicago, Ill, USA). The Biomedical Research Ethics Committee of Islamic Azad University, Zahedan Branch, approved this study (code: IR.IAU.ZAH.REC.1400.002).

The statistical population of this study included all recovered COVID-19 patients at the peak of the pandemic in the city of Isfahan. In this research, purposive sampling was used to select the sample members, which were randomly assigned to the control and experimental groups. Thirty patients (15 subjects in each group) were included in the sample members. The exclusion criteria included psychological chronic disease, consuming antipsychotics, personal dissatisfaction, and consuming psychoactive drugs. The inclusion criteria included patients aged 18 - 60 years old, having at least a high school degree, and non-consumption of antipsychotic drugs.

Due to various limitations, it was not possible to use random sampling; therefore, targeted sampling with random replacement was used. Given that in experimental and quasi-experimental studies, a sample size of 30 people (for 2 groups) has been suggested, the selected sample members were randomly divided into 2 groups; thus, there were 15 subjects in each group.

Connor and Davidson prepared this questionnaire by reviewing the research sources in the field of resilience from 1979 to 1991. The psychometric properties of this scale were assessed in 6 groups: the general population, patients referred to the primary care unit, psychiatric outpatients, patients with generalized anxiety disorder, and 2 groups of patients with PTSD. The developers of this scale believe that this questionnaire can well distinguish resilient individuals from non-resilient ones in clinical and non-clinical groups and can be used in research and clinical situations (13). The Connor-Davidson Resilience Scale (CD-RISC) contains 25 items that are scored on a Likert scale between 0 (completely incorrect) and 5 (always true) with a range of 25 - 125. The reliability of the questionnaire was tested using Cronbach’s alpha coefficient test, with an alpha of 0.74 obtained for this questionnaire (13). The reliability of this tool in the present study was obtained at 0.71 by Cronbach’s alpha.

The present study was performed to evaluate the effectiveness of CBT on the resilience of recovered COVID-19 patients at the peak of the pandemic in 2020 - 2021. From the list of individuals who were purposefully willing to participate in the study, 30 people were selected who completed the relevant questionnaires in the pretest stage; then, they were randomly divided into 2 groups of 15 in control and experiment groups. The experimental group selected in the intervention phase (4 weeks [1 month]) received a CBT protocol in 12 sessions (3 sessions per week). The post-test stage was then performed for all subjects in the 2 gropes. Afterward, the difference in scores between the pre-intervention and post-intervention stages was investigated and analyzed using SPSS version 20. It is noteworthy that after conducting the research, the control group received 6 CBT sessions; thus, the individuals in the control group have also received training from a moral point of view.

A total of 30 patients were enrolled in this study (15 subjects in each group). The distribution of the mean age of the 2 groups is presented in Table 1.

Table 1. The Distribution of the Mean Age of the 2 Groups

Table 2. The Distribution of the Mean Resilience of the Studied Variables in the 2 Groups

The distribution of the mean resilience in the 2 groups in the pretest and post-test stages is presented in Table 2.

To compare the mean resilience post-test scores in the experimental and control groups, after controlling the effect of the pretest, the univariate ANCOVA was used, whose results are presented in Table 3.

Table 3. The Results of Analysis of Covariance to Compare the Mean Resilience Posttest Scores Between the 2 Groups

According to the results, there was a significant difference between the mean resilience post-test scores and problem-oriented, emotion-oriented, and avoidant coping preferences after eliminating the pretest effect in the experimental groups. Thus, the hypothesis that “CBT affects the resilience and coping preference of recovered COVID-19 patients at the peak of the pandemic” was confirmed. The results related to the adjusted mean also indicated the effectiveness of CBT on resilience. The obtained finding is somewhat consistent with the results of previous studies (10, 12, 14, 15).

In explaining the obtained finding, it should be said that by using exposure techniques, preventing negative and extreme responses, assessing and correcting the relationship between the events and thoughts, and recognizing maladaptive thoughts, CBT could help the individual cope with anxious events (such as illness and its consequences) and reduce anxiety in dealing with unpleasant issues (12). When an individual’s anxiety in dealing with these traumatic issues decreases, he/she can cope with issues (such as illness) with greater mental strength, which finally leads to an increase in his/her mental performance and reduces the negative and adverse effects of this event (13).

On the other hand, it should be noted that CBT is widely used in the field of PTSD problems because this treatment to reduce anxiety targets the thought circle that makes the connection between the anxious event and its subsequent negative effects (16); therefore, it can be used during the COVID-19 pandemic as an effective treatment to reduce the adverse effects of anxiety during this period. In this regard, Yang et al. indicated that CBT increased an individual’s psychological capabilities to cope with problematic issues and, by promoting the individual’s resilience, helped his/her cope with the subsequent effects of the disease and its following anxious conditions. Therefore, it is obvious that CBT can help reduce the negative effects of the COVID-19 pandemic (17).

This study, like other studies, has limitations, such as the impossibility of holding face-to-face meetings (due to COVID-19 conditions) and the limitations associated with the participation of both genders in interventions (training was performed only among recovered COVID-19 female patients). In future research, it is suggested that the effect of other factors involved in the psychological problems of recovered COVID-19 patients be controlled when performing training. In addition, given the results of this study and the effectiveness of CBT, it is suggested that long-term follow-ups be performed in a larger sample in future studies to evaluate the stability of results, and also CBT-based training and treatment courses be held for recovered COVID-19 patients.

Copyright © 2022, Annals of Military and Health Sciences Research. This is an open-access article distributed under the terms of the Creative Commons Attribution-NonCommercial 4.0 International License (http://creativecommons.org/licenses/by-nc/4.0/) which permits copy and redistribute the material just in noncommercial usages, provided the original work is properly cited.
download pdf 104.14 KB Get Permission (article level) Import into EndNote Import into BibTex
Number of Comments: 0