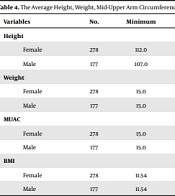 Obesity has become one of the most important health problems worldwide. Body Mass Index (BMI) is a clinical assessment of overweight and obesity in children, although Mid-Upper Arm Circumference (MUAC) assessment is more straightforward, especially for parents.

This study aimed to investigate the relationship between MUAC and BMI in children aged 6 - 12 years.

This cross-sectional study was performed on 455 elementary school children aged 6 - 12, including 278 girls and 177 boys with a mean age of 8.8 ± 1.8 years selected using the census method. Our researcher was trained for anthropometric data collection. Data were analyzed by SPSS version 25 software using Mann-Whitney, Kolmogorov-Smirnov, and Kruskal-Wallis tests.

We recommend MUAC as a predictor of early diagnosis of overweight and obesity.

Obesity is a harmful accumulation of body fat that has a detrimental effect on health and well-being. It results from a positive energy balance due to extra calorie intake and/or insufficient physical activity. It is a multifactorial disorder resulting from the interaction of genetics, environment, and lifestyle (1). Obesity in children and adolescents is associated with severe physical complications such as cardiovascular problems, metabolic disorders (hypertension, insulin resistance, and hyperlipidemia), orthopedic difficulties, night apnea, asthma, and psychosocial complications such as low self-esteem and isolation from society. If obesity is not identified and treated, its complications will continue to adolescence and cause lifetime problems (2).

In recent decades, rapid lifestyle changes have occurred due to the industrialization of societies. The global prevalence of obesity has doubled in the last four decades in childhood at the age of 5 - 19 and in the age group of 2 - 4 years (3). The World Health Organization has developed a plan to end childhood obesity (WHO ECHO) and created a comprehensive and integrated package of recommendations for addressing childhood obesity. In Iran, we are witnessing a growing trend of childhood obesity. National studies have measured the prevalence of overweight, obesity, and abdominal obesity. Therefore, the Iranian version of the program to end childhood obesity (IRAN ECHO) was adopted by examining children's habits, lifestyles, and nutrition and providing corrective suggestions (4).

In 2005, the US Preventive Services Task Force (USPSTF) found that Body Mass Index (BMI), adjusted for age and sex (calculated as weight in kilograms divided by height squared in meters), can be used as a reliable method for detecting overweight or obesity in children over six years and adults (5). Numerous studies have been performed to evaluate the accuracy and importance of this indicator in diagnosing overweight children. The Centers for Disease Control and Prevention (CDC) insisted on recording BMI in the growth chart for children after the age of two years. Since 2011, the International Cardiovascular Society has also stated the need for screening children aged two years and older for obesity based on BMI (6, 7). However, the need for training on calculating this index can be an obstacle to its widespread use, so they have always been looking for an easier way to identify the onset of obesity in children (8). Such an approach can help increase clinical assessment and public health surveillance of overweight and obesity, especially in developing countries because of the more prevalence of obesity in these communities (9).

Mid-Upper Arm Circumference (MUAC) is an easy, practical, and cost-effective method to identify children and adults with malnutrition. Although numerous studies have been done in this regard, there are limited articles on the possibility of using this index to identify obesity in children (10).

This study aimed to investigate the relationship between MUAC and BMI in children aged 6 - 12 years.

This cross-sectional study was carried out at Lavizan primary schools in a residential area. All normal healthy students willing to cooperate were included in the study using a census method. The sample included 455 subjects, comprising 177 boys and 278 girls, in the age range of 6 - 12 years. The prevalence of normal BMI in Iranian children was considered 70% (3), and based on Cochran's sample size formula, we needed at least 322 subjects. We considered an accuracy level of 0.05 and a confidence level of 95% for our study.

First, the principals, school officials, and parents were justified. Also, the ethical code of IR.AJAUMS.REC.1397.084 was received. Our researcher was trained for sampling to collect anthropometric data (height, weight, BMI, and MUAC). In order to reduce errors, measurements were performed twice, and an average was calculated. Also, to validate the data, all measurements were made by the same person, scale, and tape measure with confirmed accuracy. All children aged 6 - 12 years were included in the study. Children who did not want to cooperate, had the severe disease in the last months, and had weight loss were excluded from the study.

Descriptive statistics, mean and standard deviation, were used to describe the data. Pearson's and Spearman's correlation coefficients in SPSS version 25 software were used to analyze the data. The Kolmogorov-Smirnov test was used to check the normality of the data. We used the Mann-Whitney U test to test the average height, weight, and BMI based on gender. The Kruskal-Wallis test was used to analyze arm circumference based on BMI class (P < 0.05). Receiver Operating Characteristic (ROC) curve was used to determine the cutoff points on the graphs. According to previous studies, the best area was placed below 0.1-0.9 on the ROC curve (12). Finally, the Youden index was used to evaluate the sensitivity and specificity of the cutoff point on the ROC curve (13).

Table 1. Descriptive Information of Participants in This Study

Table 2. Interpretation of Weight Based on Body Mass Index by Gender

Table 3. Investigating the Correlation Between Research Variables by Gender a

There was a significant difference between BMI and MUAC in both sexes (P < 0.001).

Determining the MUAC cutoff point from the ROC curve was not significant in children with underweight or normal weight, while in both sexes, it was significant in the range of overweight and obesity. A study in Pakistan on children aged 12 - 18 years showed that MUAC is a good indicator for screening obesity (14), so the results are similar to our study, but the age groups are different. The study on Polish school children (aged 7 - 18 years) indicated that MUAC was more accurate for screening than BMI (15). In that study, the researchers suggested MUAC as a socioeconomic predictor (15), which is somehow different from our study.

Another study in Nepal on adults showed that MUAC is a good tool for screening the underweight (16). Also, the age group and MUAC predicted the underweight, which is different from our study, but like our study, it showed the importance of MUAC. Also, a study in India explained the importance of MUAC in school-aged children as a predictor of BMI (17).

Measuring mid-upper arm circumstances is more straightforward than BMI estimation. Therefore, we recommend MUAC as a predictor of early diagnosis of overweight and obesity, especially for families, as a practical and cost-effective method.

This work was generously supported and funded by AJA University of Medical Sciences. The authors thank all participants who volunteered and participated in this study.

Copyright © 2022, Annals of Military and Health Sciences Research. This is an open-access article distributed under the terms of the Creative Commons Attribution-NonCommercial 4.0 International License (http://creativecommons.org/licenses/by-nc/4.0/) which permits copy and redistribute the material just in noncommercial usages, provided the original work is properly cited.
download pdf 118.97 KB Get Permission (article level) Import into EndNote Import into BibTex
Number of Comments: 0