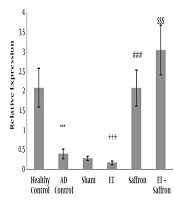 Alzheimer's disease (AD) is a type of cognitive impairment that disrupts the mitochondrial function and metabolism of neurons. Studies have shown that training is a potent factor in enhancing mitochondrial biogenesis and saffron with its antioxidant properties can improve neurodegenerative disorders effectively.

Accordingly, the aim of this study was to investigate the effect of endurance training (ET) with saffron consumption on peroxisome proliferator-activated receptor-γ coactivator (PGC-1α) gene expression in hippocampal tissue of rats with AD.

In this experimental study, 40 rats with AD (induced by 8 mg/kg trimethyltin (TMT) injection were divided into five groups of eight rats, including (1) AD control, (2) ET, (3) ET with saffron, (4) saffron, and (5) sham. To investigate the effects of AD induction on PGC1-α, eight healthy rats were assigned to the healthy control group. During eight weeks, groups 2 and 3 ran on a treadmill for eight weeks, three sessions per week, for 15 - 30 min at a speed of 15 - 20 m/min per session. Groups 3 and 4 received 25 mg/kg aqueous extract of saffron peritoneally. One-way ANOVA, Tukey’s post hoc, and two-way ANOVA tests were used for data analysis by SPSS software (P ≤ 0.05).

It seems that ET and saffron consumption have interactive effects on the increase of PGC1-α gene expression in the hippocampal tissue of rats with AD.

The most common form of dementia in the elderly is Alzheimer’s disease (AD), which is associated with a gradual loss of memory (1). The increase in free radicals and reactive oxygen species (ROS) of mitochondria as a result of aging can cause mutations in mitochondrial DNA, deficiency in mitochondrial function, and consequently cellular aging (2). Alzheimer’s disease is known as a disorder of brain metabolism; the phosphorylation of amyloid precursor protein (APP) appears to increase beta-amyloid (Aβ) and oxidative stress (2). This negatively regulates or decreases the levels of sirtuins and peroxisome proliferator-activated receptor-γ coactivator (PGC-1α), as well as induces mitochondrial-dependent cell death (2-4). On the other hand, many studies have reported favorable effects of physical activity on the nervous system function (5, 6) so that endurance training (ET) (7) and voluntary training (8) reduced oxidative stress, autophagic factors, and cell death markers and increased mitochondrial biogenesis in the hippocampal tissue of elderly rats. Endurance training also increases mitochondrial biogenesis in the brain tissue of old and young rats (9).

Due to the role of free radicals in the pathogenesis of AD, the use of medicinal plants, due to fewer side effects and antioxidant properties, has been the focus of research (10). Among these plants, saffron (with scientific name Crocus satious L.) by its antioxidant and anti-inflammatory mechanisms modulates neurotransmitters and increases neurotrophins and neuroprotection (11, 12). In this vein, researchers showed that 20 and 30 mg/kg saffron administration for 12 months improved cognitive function in patients with AD and there was no significant difference between the two doses (13).

Crocetin as a constituent of saffron also increases the PGC1-α gene expression in cyclophosphamide poisoned rats (14). In addition, researchers have suggested the use of herbs and antioxidants simultaneously with physical activity as an appropriate method for the prevention and treatment of some diseases (15). For example, the results of a study showed that aerobic training combined with saffron consumption increased mitochondrial biogenesis markers in the muscle tissue of rats (15). However, limited studies have investigated the interaction of saffron and ET on the PGC1-α gene expression in the hippocampal tissue.

Given the importance of mitochondria in cell life and the deleterious effects of AD on the central nervous system, it seems necessary to conduct studies to assess non-invasive methods with the best effect on preventing irreversible damage to the central nervous system. In this vein, the present study was conducted to investigate the effect of eight weeks of ET with saffron consumption on PGC1-α gene expression in the hippocampal tissue of rats with AD.

In this experimental study, 48 male Sprague Dawley rats, with an average age of eight weeks, and a mean weight of 220 ± 30.65 g were purchased from the Lab Animal Breeding and Reproduction Center of Islamic Azad University, Marvdasht Branch. After transferring the animals to the Sport Physiology Laboratory of the university, the animals were kept for a week to adapt to the new environment. During the study period, the animals had free access to water and food. On the eighth day, 40 rats were injected intra-peritoneally with 8 mg/kg TMT neurotoxin (Sigma, Germany). After two weeks, the learning and memory tests were administered on laboratory animals to ensure memory deficits (16). After 24 h of ensuring its full effect on the hippocampus, the animals were randomly divided into five groups of eight rats, including (1) AD control, (2) ET, (3) ET with saffron, (4) saffron, and (5) sham (including rats with AD and intra-peritoneal injection of saffron solvent or normal saline to investigate the effects of injection stress and saffron solvent on research variables).

It is noteworthy that in order to evaluate the effects of TMT neurotoxin injection on PGC1-α, eight healthy rats were placed in the healthy control group for the first week. Then, rats in groups 2 and 3 ran on a treadmill for eight weeks, three sessions per week, for 15 - 30 min at a speed of 15 - 20 m/min per session (17). Groups 3 and 4 peritoneally received 25 mg/kg aqueous extract of saffron each day for eight weeks.

To prepare the aqueous extract of saffron in this study, 9.2 g of saffron was poured in 1000 mL of physiological serum (normal saline) and the mixture was incubated for 16 h at 50°C. Then, the solution was passed through a filter and maintained at 4°C (18).

Forty-eight hours after the last training session and saffron administration at the end of the eighth week, the rats underwent surgery to measure PGC1-α. The rats were anesthetized after about 5 min using ketamine 10% (50 mg/kg) and xylazine 2% (10 mg/kg). Then, hippocampal tissues were extracted by specialists and after being placed in cryotubes were put in liquid nitrogen and stored at -70°C for further investigation. Indeed, after the rats were anesthetized, the skull bone was removed to determine the hippocampal area on both sides. One side of the hippocampus was used for RNA extraction.

After DNA extraction, the PGC1-α gene expression was measured by the real-time PCR. The sequence of primers used is shown in Table 1. The Shapiro-Wilk test was used for investigating the normal distribution of data and one-way ANOVA with Tukey’s post hoc test for investigating the effect of TMT and saffron solvent (normal saline). We used two-way ANOVA to evaluate the effect of ET and saffron on PGC1-α gene expression. Statistical analyses were done by SPSS version 22 software (P ≤ 0.05).

Table 1. The Sequence of Research Primers

The mean and standard deviation of PGC1-α are presented in Figure 1. The results showed significant differences in PGC1-α levels (P = 0.001) between the healthy control, AD control, and sham groups. The results showed that the levels of PGC1-α gene expression were significantly lower in the AD control group than in the healthy control group (P = 0.001). However, there was no significant difference in PGC1-α levels (P = 0.71) between the AD control and sham groups. Studies have shown that AD is associated with a metabolic disorder of the central nervous system so that the functional impairment of several enzymes participating in the Krebs cycle has been reported in individuals with AD compared to healthy individuals (19). The results of the present study showed that the AD induction by TMT significantly decreased the PGC1-α gene expression in the hippocampal tissue of rats. The increased Aβ accumulation following AD can decrease adenosine monophosphate-activated protein kinase (AMPK) activity, decrease cytosolic Ca2+-calcium/calmodulin-dependent protein kinase-β phosphorylation (CaMKKβ), increase autophagy activation of the ubiquitin-proteasome system and as a result, break down proteins such as PGC-1α. These factors disrupt the mitochondrial DNA function of neurons and ultimately result in mitochondrial-dependent cell death (4, 19).

Nowadays, one of the methods used to induce AD in animal models is the use of TMT as a potent neurotoxin that causes selective damage to the central nervous system. Trimethyltin includes the increased oxidative stress, decreased antioxidants, impaired mitochondrial function, and finally neuronal death in different parts of the central nervous system (20). The researchers have sown that TMT can reduce brain-derived neurotrophic factor (BDNF) (21, 22). On the other hand, the results of the present study showed that ET significantly increased the PGC1-α gene expression in the hippocampal tissue of rats with AD. The researchers believe that exercise activity increases the expression of mitochondrial transcription factor A (TFAM) (23) through the beta-adrenergic/cAMP receptor pathway, enhanced AMP/ATP ratio, enhanced AMPK, up-regulation of the PGC1-α/FNDC5/BDNF pathway, and subsequently enhanced transcription of nuclear respiratory factor (NRFs) 1 and 2. Exercise activity also increases BDNF and its receptor tyrosine kinase B (TrkB), and hence activates the MAPK-2/ERK1 pathway, δ protein kinase C subunit (PKC-δ), and protein kinase A, leading to cAMP activation (24). Calcium release following muscle contraction activates calmodulin, calcineurin, and calmodulin kinase, thereby increasing SIRT1, PGC1-α, and PPAR activation (25). In line with the present study, the researchers have shown that two weeks of endurance swimming training significantly increased PGC1-α in the hippocampal tissue of rats after excessive alcohol consumption (23). Also, eight weeks of ET for one hour per day significantly increased the PGC1-α gene expression in the brain tissue of young and old rats (7).

The results showed that saffron consumption significantly increased the PGC1-α expression in the hippocampal tissue of rats with AD. Many studies have assessed the effect of saffron and its constituents on different pathways of cell metabolism. These studies showed that saffron consumption increased glucose vectors and improved the GLUT4/AMPK pathway in vitro and in vivo (11). Although there is limited information on the effect of saffron consumption on mitochondrial biogenesis in the brain tissue, researchers have shown that crocin consumption with its antioxidant effects reduces free radicals and MDA and increases SOD and GPX, leading to the increased transcription of NRF1, PGC1-α, and mtDNA (15). It has been reported that crocetin consumption (as a constituent of saffron), through its antioxidant pathway, significantly increases the transcription of PGC1-α in cyclophosphamide-poisoned rats (14).

The present study showed that ET simultaneously with saffron consumption had interactive effects on the increase of PGC1-α gene expression in the hippocampal tissue of rats with AD. It has been reported that exercise activity seems to increase mitochondrial biogenesis in the hippocampus through the beta-adrenergic/cAMP receptor pathway, increased AMP/ATP ratio, increased AMPK, and up-regulation of PGC1-α/FNDC5/BDNF pathway (23). On the other hand, saffron consumption modulates metabolism (11), reduces free radicals and MDA and increases SOD and GPX, which all increase the transcription of NRF1 that, in turn, increases PGC1-α and mtDNA expression (15). Saffron consumption also activates the PKC pathway, protein kinase A, CaM-KII, and cAMP activation, and enhances the expression of MAPK, JNK, and ERK (26), which lead to increased mitochondrial biogenesis in the hippocampal tissue. Regarding the PGC1-α method of study, it seems that the lack of investigation of PGC1-α protein levels is one of the limitations of the present study. Hence, it is suggested that future studies take advantage of different methods of investigation to measure PGC1-α.