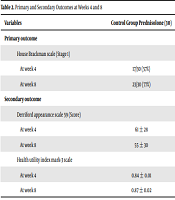 Steroids with and Without Antivirals in the Treatment of Bell’s Palsy: Does It Make any Difference in Recovery? A Study at a Tertiary Care Center, Karachi, Pakistan

To compare the pharmacological effects of steroids in comparison to steroids with antiviral drugs for the treatment of Bell’s Palsy.

A total 60 patients were enrolled and segregated equally into two groups, where patients on prednisolone were labeled as group A (Control group), whereas patients on prednisolone + acyclovir were labeled as group B (study group). All patients had House Brackmann score. The control group started oral prednisolone 1 mg/kg for 10 days, whereas the study group started acyclovir 400 mg 4 times a day for 10 days along with prednisolone tablets. Patients were regularly observed till the study was completed. Primary outcome measure was facial nerve recovery. Health-related quality of life and facial appearance were considered secondary outcomes.

Human’s face is a focal point for expression, and communication with its proper function has a great impact on human’s quality of life. Facial nerve dysfunction, causing facial disturbance with both cosmetic and functional components, can severely hamper patients’ quality of life. Facial nerve palsy may occur with trauma, iatrogenic, stroke, and idiopathic Bell’s Palsy. Other known causes are multiple sclerosis, malignancy, and meningitis related to granulomatous diseases. Central and peripheral facial weakness requires a complete neurological history and thorough physical examination. The most frequent causative factor for facial nerve paralysis is Bell’s Palsy or Antoni’s Palsy. The incidence of this palsy has been reported (20-30/100,000/annum) with equal gender involvement (1). In the majority (60 - 75%) of patients having unilateral facial paralysis, the underlying etiology is Bell’s Palsy (2). The median age of the presentation of Bell’s Palsy is 40 years. However, this can occur at any age (3). Both sides of the face are equally involved by the Bell’s Palsy (3).

The possible proposed pathogenetic explanation for Bell’s Palsy is inflammation of VII cranial nerve at sensory ganglion, causing edema, ischemia, and eventually demyelination. Although the precise etiology of Bell’s Palsy is not yet identified to date, recently, enveloped DNA virus Herpes Zoster virus has been identified as one of its possible etiologies. Some conditions like Cholesteatoma, Parotid gland tumors, and Herpes Zoster Oticus cause isolated facial palsy similar to Bell’s Palsy. Diabetes, sarcoidosis, Lyme disease, HIV infection, Sjogren's syndrome, leprosy, polyarthritis nodosa, and amyloidosis can cause Bell’s-like facial paralysis (lower motor neuron type), which can be differentiated from Bell’s Palsy by its quick onset during several hours.

Bell’s Palsy is characterized by complete ipsilateral paralysis of all muscles of the face, disappearance of face creases and nasolabial fold, inability to close the affected eye, drooping of corners of the mouth, as well as drooling of food and saliva from the involved side. Recovery in Bell’s Palsy is variable, whereas the majority completely recover; however, some patients develop permanent defacing (4). Old age (1), uncontrolled hypertension (5), dysgeusia (6), and complete paralysis (7) are considered the worst prognostic factors. Bell’s Palsy rarely involves both sides of face. In case of bilateral involvements, it is suggested alternate diagnoses like Lyme’s disease, lymphoma, or sarcoidosis (8). Diagnosis of Bell’s Palsy is purely clinical. However, electrodiagnostic testing, if performed within two weeks of the onset, gives prognostic information. Facial muscles have shown no electrical activity within the first three days of palsy, whereas electrical activity started to steadily decline from days 4 to 10. Complete recovery occurs in 90% of patients where electrical excitability is retained, whereas if excitability loses, complete recovery drops to just only 20% (1, 9).

The pharmacological therapy of Bell’s Palsy has always been a point of debate as of its unknown etiology. The mainstay pharmacological treatment for Bell’s Palsy is corticosteroids (1) and antivirals [based on the rationale of proposed pathogenesis that is either an inflammation (steroid responsive) or HSV1 infection (antiviral responsive)] (10). The present study was designed to evaluate the pharmacological effects of steroids in comparison to steroids with antiviral drugs for the treatment of Bell’s Palsy. In other words, to compare the beneficial effects of prednisolone versus prednisolone + acyclovir on Bell’s Palsy and to compare primary and secondary outcomes among both groups.

Prior approval was sought from Institutional Review Board (IRB-DUHS) before the commencement of this study, where all ethical aspects were evaluated. After suggested corrections by worthy IRB-DUHS; finally, ethical approval was granted. All patients with a confirmed diagnosis of Bell’s Palsy aged 18 years or greater with either sex who presented either in medicine department, ENT, neurology department or physiotherapy and rehabilitation center of Civil Hospital Karachi within 4 days of symptoms of Bell’s Palsy were enrolled for the study. Written informed consent was obtained from all participants after a proper explanation of anticipated benefits versus risk of the study. Patients with diabetes, Herpes Zoster, sarcoidosis, multiple sclerosis, systemic infection, suppurative otitis media, malignancy, and bleeding peptic ulcers were excluded from the study. Pregnant and breastfeeding patients were also excluded.

Bell's Palsy was diagnosed based on clinical presentations of acute facial nerve weakness or the onset of ipsilateral paralysis on one side of the face in less than 72 hours after exclusion of other likely causes of facial paralysis.

A total of 60 patients were enrolled and divided equally into two groups, where patients on prednisolone were labeled as group A (Control group), whereas on prednisolone + acyclovir were labeled as group B (Study group). Both groups were randomized where group A was given even numbers and group B was given odd numbers. All patients, recruiters, and outcome assessors were blind to medications given.

Patients in this group were given prednisolone with a standard dose of 1 mg/kg of bodyweight for 10 days and tapered for the next 5 days.

Patients in this group were given prednisolone with a standard dose of 1 mg/kg of bodyweight for 10 days and tapered for the next 5 days along with acyclovir 400 mg 4 times a day.

All participants had initial visits where House Brackmann scores were calculated in both groups, and the control group started oral prednisolone 1 mg/kg for 10 days, whereas the study group started acyclovir 400 mg 4 times a day for 10 days along with tablet prednisolone. Patients were regularly observed till the study was completed. Patients were called up every week for 4 weeks and then finally, on 8th week where facial nerve paralysis recovery were carefully evaluated by clinical examination by authors, and recovery was graded by House Brackmann grading scale. The secondary outcome measures were calculated by Health Utility Index Mark 3 and Derriford appearance scale 59 both on 4th and 8th weeks.

The Health Utilities Index Mark 3: This questionnaire-based tool was used for the assessment of the quality related to health that utilized eight variables, including speech, hearing, vision, cognition, ambulation, emotion, dexterity, and pain. Where 5 or 6 points of severity were given for one dimension (13). Scoring system for this scale is based on preference, where responses are changed into a single score which ranges from –0.36 to 1.00, wherescore of 1 indicates full quality of health, negative score indicates the worst quality of life.

Derriford Appearance Scale 59: This is a questionnaire-based scale to determine facial appearance and consisted of 59 questions based on confidence and self-consciousness. This score comprises 8-266 points, where high score indicates worse severity and distress (14).

Both groups were analyzed on the principle of intension to treat, and comparisons were done in accordance with the study protocol. Data were collected by the two assigned researchers themselves to avoid person-to-person bias, and they were blinded to the pharmacological treatment given to the patients. All data were analyzed statistically with SPSS version 21.

Data were initially tested for interaction between both control and treatment groups. In case of insignificant results, the comparison of the primary outcome (complete recovery is represented by grade 1 on the House–Brackmann scale) at 1 month and 2 months was done in both groups. A two-sided Fisher's exact test was used. Secondary outcome measures namely quality of life (Health Utility Index Mark-3), facial appearance (Derriford appearance scale 59) was analyzed and compared through scores between both control and experimental groups using student t-test or Mann–Whitney U test wherever required. For all statistically significant analysis P-value < 0.05 was considered significant.

A total of 83 patients were referred for enrolment, but 23 patients were excluded as they were not fulfilling the relevant criteria, and the remaining 60 patients were finally enrolled and randomly divided into the control and study groups.

Table 2. Primary and Secondary Outcomes at Weeks 4 and 8

The present study also assessed the secondary outcome of Bell’s Palsy in terms of quality of life determined by Health utility index-3 and Derriford facial appearance scale-59 between both groups. This study has shown more improvement in terms of quality of life and facial appearance in the prednisolone and acyclovir group in comparison to the prednisolone group alone. A previous trial (15) was inconsistent with our study where no benefit was observed in secondary outcomes in Bell’s Palsy in combination with prednisolone and acyclovir as opposed to prednisolone alone. There are certain limitations to this comparative study in which small sample size and steroids were not head to head compared for recovery of Bell’s Palsy as steroids have to be added in the study group to avoid ethical issues because steroids are gold standard for Bell’s Palsy treatment.

This study concludes that the combination of prednisolone with acyclovir is superior to prednisolone alone in the pharmacological management of Bell’s Palsy. The combination treatment has shown improvement in both recovery and quality of life.