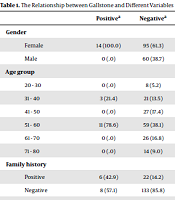 Identification of the causes of gallstone would result in better planning for the prevention of this disease. One of the proposed risk factors for this problem is Helicobacter pylori (H. pylori) infection.

The purpose of this study was to determine the incidence rate of gallstone in patients with H. pylori gastritis.

This was an observational study performed as a descriptive-comparative cross-sectional survey. We enrolled 169 consecutive patients with H. pylori gastritis admitted to Imam-Hossein Hospital, Tehran, Iran, in 2018, and gallstone frequency in them was determined and compared with other variables.

It may be concluded that gallstone frequency in patients with H. pylori gastritis is low, and there is no significant association between these two conditions.

Gallstone is a common problem with a prevalence rate ranging from 11% to 36% (1). The incidence rate of this problem is related to age, sex, and ethnicity, with a higher rate among female subjects (1). The association between gallstone and Helicobacter pylori (H. pylori) infection is controversial (1-6). Determining the association between gallstone and H. pylori infection would help to better plan preventive programs (2, 7-10). Cholecystitis is a common surgical procedure usually due to gallstone (11). Female gender, older age, and obesity are important risk factors for cholecystitis (11, 12), but it may be seen without gallstone in nearly 10% of cases (13). Gallstone is related to both environmental and genetic factors (14). Gallstone may even be seen in asymptomatic patients, and further workup with a special focus on the etiological factors is required (15, 16). Helicobacter pylori is an important infectious factor besides the other related diseases such as peptic ulcer, dyspepsia, and cancer (17); it is observed in 70.1%, and 86.2% of patients with gastritis and gastric ulcer, respectively (18), and positive antibody is seen in 86.3 - 91% of Iranian patients (19).

Helicobacter pylori eradication can result in decreased rate and severity of gastrointestinal symptoms, especially dyspepsia, and would help to improve the quality of life (20, 21). Hence, the purpose of this study was to determine gallstone frequency in patients with H. pylori gastritis.

This observational study was performed as a descriptive-comparative cross-sectional survey. We participated 169 consecutive patients with H. pylori gastritis that had dyspepsia and epigastric pain and were admitted to Imam-Hossein Hospital, Tehran, Iran, in 2018; the required data was recorded in a checklist. The exclusion criteria were the use of antibiotics with anti-H. pylori effects such as metronidazole, ciprofloxacin, levofloxacin, amoxicillin, bismuth, tetracycline, and clarithromycin, besides PPI use.

This study was approved by the local ethics committee with the code of ethics BMSU13971617. Informed consent was not required, but confidentiality of the data was respected. All the ethical considerations were adhered to, and we had no intervention in this study. Biopsy samples were assessed to establish H. pylori infection and gastritis, and they were stained by Hematoxylin and Eosin. In positive cases for H. pylori infection, gallstone frequency rate was determined by ultrasound assessment and compared with other variables.

Data analysis was performed by SPSS version 25.0. The numerical data was reported as mean and standard deviation, and frequency and percentage were reported for categorical variables. chi-square test and Fisher’s exact test were run to analyze the data. A P-value of less than 0.05. was considered significant.

Table 1. The Relationship between Gallstone and Different Variables

The study by Attaallah et al. (1) revealed that 37% of patients with symptomatic gallstone had H. pylori infection, but this rate was lower in our study. Zhang et al. (2) reported that the incidence rates of gallstone in patients with positive helicobacter, eradicated helicobacter, and negative helicobacter status were 9.47%, 9.02%, and 8.46%, respectively, showing no significant association. Sabbaghian et al. (3) studied 36 patients under cholecystectomy and noted that 33.3% were positive for H. pylori in PCR; this rate was lower in our study.

The study by Lee et al. (4) among 58 cases under cholecystectomy found that H. pylori was positive in four cases with gallstones, six cases with biliary secretions, and five patients with positive biliary tissue. The reported rates were higher than those obtained in our study. Monstein et al. (5) reported that 55% of patients with cholesterol gallstone had a positive status for H. pylori, this rate was higher in comparison with our finding. Takahashi et al. (6) reported that the prevalence rates of gallstone in cases with negative helicobacter status, eradicated conditions, and positive cases were 3.81%, 4.37%, and 6.08%, respectively, while the rate in our study was higher.

The study by Stathopoulos et al. (7) showed that 20.54% of cases with gallstone had positive results for H. pylori infection in gastric biopsy samples, which was higher than our finding. Deeba et al. (8) studied 75 patients with gallstone symptoms, which showed that IgG was positive against H. pylori; this rate was higher than our results. Abro et al. (9) demonstrated that H. pylori infection was observed in the biliary tissue of 55% of cases with chronic cholecystitis. Fikry et al. (10) reported a contributing rate of 63%, which is higher than our obtained results.

In sum, gallstone frequency in patients with H. pylori gastritis is low, and there is no statistically significant association between these two conditions. However, further studies with larger sample sizes are required to corroborate our results.

We wish to thanks all the individuals who participated in this study.