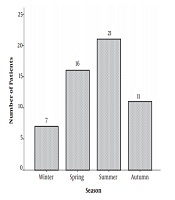 The Prevalence of Viruses in the Cerebrospinal Fluid of Children with Aseptic Meningitis in Shiraz, Iran

The current study aimed to evaluate the causative agents of viral meningitis through real-time PCR among children with aseptic meningitis.

Of 56 patients suspected to viral meningitis, 21 (38.9 %) had a positive PCR result. Enterovirus (42.85%) and mumps (38.1%) were the most prevalent viruses, and VZV and measles were not detected. Three children were coinfected with enterovirus/hhv6, enterovirus/EBV, and mump/adenovirus. Fever, headache, and nausea/vomiting were the most common symptoms in children. The rates of symptoms were not statistically significant among children with positive and negative PCR tests.

Aseptic meningitis is the inflammation of the brain meninges in patients whose cerebrospinal fluid (CSF) culture is negative, which viruses are the most common cause (1). Viral meningitis (VM) mostly occurs in children (2, 3). Although many cases of VM are thought to go unreported (4), the reported incidence of VM in developed countries with precise diagnostic workup, was about 50% of all cases of meningitis (5). Most VM cases are caused by Epstein-Barr virus (EBV), herpes simplex viruses (HSV), varicella-zoster viruses (VZV), cytomegaloviruses (CMV), and enteroviruses (5). Currently, enteroviruses are much more common than other viruses, due to the widespread use of mumps, measles, and rubella (MMR) vaccine (6).

Hallmark symptoms of VM include fever, headache, stiff neck, lethargy, anorexia, vomiting, diarrhea, sore throat, and rash (7). In infants and young children, clinical manifestations may vary with age or depending on infectious agents and immune status (8). Thereby, symptoms are not reliable indicators to distinguish different types of meningitis. The laboratory approaches available for the diagnosis of VM comprise CSF viral culture, direct fluorescent antibody (DFA), and molecular methods (9). The polymerase chain reaction (PCR) is a fast method to detect viruses in the CSF (9, 10), which was approximately 3 to 1000 folds more sensitive than viral culture (10). Although there is no satisfactory comparing method for assessing the PCR accuracy, the efficiency of PCR has been confirmed in different studies (11-13).

Patients with VM often receive antimicrobial therapy before culture results would be available, while only supportive care is needed, and the majority of patients improve spontaneously (4). Therefore, the prompt diagnosis of VM can prevent or reduce the inappropriate empirical antibiotics use and decrease the length of hospital stay.

The present study aimed to identify the etiological pathogens causing VM in our geographical area using the real-time PCR method in the CSF of children suspected to viral meningitis.

This prospective, cross-sectional study was conducted on children aged between 1 month and 16 years of age admitted to pediatric wards at Nemazee Hospital with the impression of meningitis from March 2014 to February 2015. Nemazee Hospital is a tertiary teaching hospital with more than 50 wards and 900 beds, affiliated to the Shiraz University of Medical Sciences (SUMS) that is also a referral center for the south of Iran. Ethical approval for this study was obtained from the SUMS, Shiraz, Iran.

Children with at least one of the following criteria received lumbar puncture (LP): (A) Fever with signs of meningeal irritation, bulging fontanelles, unexplained irritability, persistent nausea, and vomiting or petechial rash or purpura; (B) unexplained alteration of consciousness with or without fever; (C) fever without localizing signs in an ill or toxic child; (D) first febrile seizure in children under 12 - 18 months of age, and (E) complex febrile seizure.

LP was performed by an experienced pediatric resident or fellowship. CSF samples were sent to Professor Alborzi Clinical Microbiology Research Center, affiliated to SUMS for analysis. Before performing LP, written informed consent was obtained from the children’s parents.

Exclusion criteria Were as Follows: Partially treated meningitis (received one or more doses of antibiotics before admission to the hospital), aseptic meningitis associated with other conditions such as the Kawasaki disease or any form of vasculitis, children without CSF pleocytosis, and patients aged less than one month and more than 18 years.

Demographic characteristics of patients, the presence of prodromal symptoms, and other laboratory data, including white blood cell (WBC) count, absolute neutrophil count (ANC), and protein and sugar concentration in the CSF, were also recorded.

The CSF samples were collected from eligible patients for real-time PCR analysis. High Pure Viral RNA Kit (Roche Applied Sciences, US) was used for viral RNA extraction, and High Pure Viral Nucleic Acid Kit (Roche Applied Sciences, US) was used for DNA extraction from 200 µL of CSF sample according to the manufacturer instruction. CSF specimens were analyzed for the presence of viruses through TaqMan real-time PCR assay. Standard assay kits were purchased from PrimerDesign, UK, and used for detecting enterovirus, mumps, measles, adenovirus, EBV, CMV, VZV, hhv 6, and rubella viruses. The lyophilized assay stocks in all kits were rehydrated according to the manufacturer’s instruction to create a serial dilution from 1 × 105 - 10 copies/reaction. Two master mixes, including 2x one-step Master Mix (Applied Biosystems, US) and Gene Expression Master Mix (Applied Biosystems, US) were applied to amplify RNA and DNA viruses, respectively. 5 µL of each purified DNA and RNA extracts were used as a template in a separate qRT-PCR reaction.

The data were analyzed using SPSS version 21.0 (SPSS Inc., Chicago, IL, USA). The chi-square test and Fisher’s exact test were used for analyzing categorical variables. The Mann-Whitney U-test was used for comparison of continuous variables. A P-value of ≤ 0.05 was considered statistically significant. 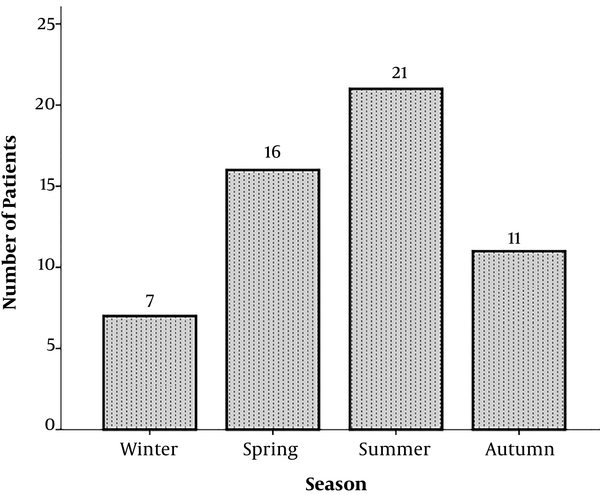 The seasonal distribution of aseptic meningitis 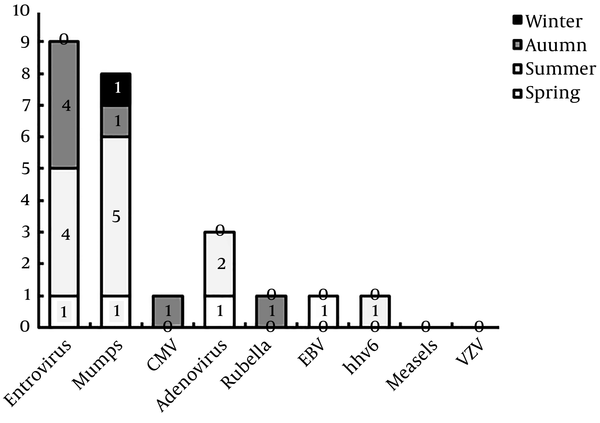 Seasonal distribution of viruses in children with viral meningitis

Table 2. Clinical Manifestation of Patients with Positive and Negative PCR

The CSF analysis and laboratory findings of blood samples are presented in Tables 3 and 4. There were no significant differences between PCR positive and PCR negative groups.

Meningitis is the infection of the central nervous system (CNS) caused by inflammation in the meninges (14). Viruses are the most common cause of meningitis infections, followed by bacteria, fungi, protozoa, drugs, and chemical agents (1). VM is often mild, self-limited, and without severe sequelae (9). As the initial manifestations are the same in all types of meningitis, making it primarily difficult to distinguish bacterial and viral meningitis (15). Therefore, rapid empirical antibiotic therapy starts for all meningitis patients. Early detection of pathogens is associated with reduced antibiotic use and shorten hospital stay. Currently, culture is the gold standard for the diagnosis of viral infections. However, virus isolation is a poor diagnostic tool due to its insensitivity and time consumption (9, 10). Using sensitive molecular methods like PCR in routine clinical practice could be useful in the rapid diagnosis of VM. The lack of PCR inhibitors such as haem and enzymes in the CSF samples, making it a sterile sample compared to the other body sits and decreases the false-positive PCR results (16). Overall, many studies have indicated that PCR is more fast, sensitive, and non-invasive compared to other standard methods such as culture and brain biopsy (10). Molecular detection of viruses in the CSF is related to the onset of neurological symptoms, as the highest positive rate for enterovirus infection was found between days 3 to 14 (17).

In this study, real-time RT-PCR was used to determine viral etiology in children with aseptic meningitis. Totally, 38.9% of cases were detected as PCR positive, and enterovirus and mumps were the most frequent viruses. Enterovirus was reported as the most common causative agent of VM in many studies (2, 7, 10, 12, 18). A study from Iran reported similar results so that enterovirus (43.3%) and mumps (36.7%) had the highest prevalence (19). In another study from Turkey, mumps (50.7%) meningitis occurred more frequently than enterovirus (17%) (20).

The occurrence of postvaccination meningitis in children is one of the adverse events of MMR (measles, mumps, and rubella) vaccination (21). Vaccine failure (failure to seroconvert after vaccination) following the first doses of vaccine can explain the cause of infection (22). It was revealed that the success of vaccination against mumps ranged from 64 to 95% for one dose vaccine (19). According to the reports, the mumps vaccine might be considered as one of the etiologic agents of aseptic meningitis in Iran (18, 19, 23). Based on the national immunization program of Iran, children get the first dose of MMR vaccine at 12 months of age (24). In a study in Tehran, the rate of positive IgM for mumps was 62.7% in children aged from 9 months to 14 years (25). In the present study, four patients with mumps meningitis received MMR vaccine, that two cases aged 12 months of age.

We found three cases of coinfection: two cases had enterovirus with either EBV or hhv6, and one case was coinfected with mumps and adenovirus. Several studies mentioned viral meningitis coinfection; for example, Jin et al. (9) reported three coinfections of enterovirus with adenovirus (2 patients) and rhinovirus (one patient). In a study from Iran, out of 66 CSF samples from patients diagnosed with aseptic meningitis, two cases had mumps and enterovirus coinfections (18). Also, EBV was frequently found in the CSF of HIV-infected patients with VM (26). In a report by Kimiya et al. (27), EBV was identified in the CSF of two patients with VM. They showed the temporal order of EBV coinfection with another pathogen, proposing that EBV reactivation occurred as a consequence of blood-brain barrier disruption due to echovirus meningitis (27).

It was shown that viruses such as adenovirus, CMV, EBV, influenza A and B, measles, parainfluenza, rubella, VZV, and hhv-6 are rare causes of VM. Approximately 4% of VM cases are caused by the herpes family (14). In the present study, the prevalence of other viruses (CMV, rubella, EBV, and hhv-6) was low, and VZV and measles were not detected, which is similar to other studies (19, 28). In a study by Hosseininasab et al. (19), 2 (3.1%) cases had positive results for VZV, and a study in Ahvaz reported only one infant positive for VZV, that was born to a mother with VZV infection.

Consistent with other studies, our peak season was in summer (19, 29). However, in a report from the south-west of Iran, enterovirus had an atypical winter outbreak, suggesting that high summer temperatures (~50°C) in this region may affect virus survival (7).

Common clinical symptoms of meningitis include fever, malaise, vomiting, petechial rashes, and increased WBC count with a lymphocytic predominance (1, 18). Signs and symptoms of meningeal irritation such as Brudzinski and Kernig, as well as nuchal rigidity, rarely occur in younger children, and they often present symptoms such as poor feeding, vomiting, seizure, lethargy, and bulging fontanel (14). Fever and nausea/vomiting were the most frequent complaints in our study. Amarilyo et al. (30) revealed that clinical signs and symptoms had little diagnostic value to discriminate between children with or without meningitis.

In this study, we provided data on the prevalence of viruses in children with aseptic meningitis. Enterovirus and mumps were the most common pathogens causing VM in this population. As the clinical manifestations are poor discriminator for meningitis, rapid diagnosis of VM by molecular methods is essential for successful management of patients with CNS infections, which causes reduced unnecessary antibiotic prescribing. Moreover, detection of mumps virus in children who received MMR vaccine should provide the warning for evaluating the vaccine potency and safety.

The authors would like to thank Professor Alborzi Clinical Microbiology Research Center and Center for Development of Clinical Research of Nemazee Hospital affiliated to Shiraz University of Medical Sciences, Shiraz, Iran.