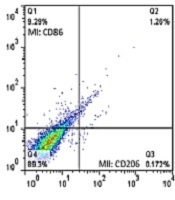 This study aimed to investigate the effect of AT and O supplementation on CD86 and CD206 concentration in white adipose tissue of rats poisoned with deep-fried oil (DFO).

A total of 30 male Wistar rats were divided into groups, including healthy control, DFO control, AT + DFO, O + DFO, and AT + O + DFO. During the four weeks the O groups received 81 μmol/kg octopamine for five days/week intraperitoneally, and AT groups performed training with moderate intensity (26 m/min). Forty-eight hours after the last intervention, the rats were anesthetized and subcutaneous adipose tissue was removed for CD86 and CD206 assays.

Both AT and O can reduce the negative effect of deep-fried oil on macrophage permeability in adipose tissue.

Chronic inflammation in adipose tissue causes metabolic diseases (1). Numerous studies have shown that adipocyte enlargement is associated with increased expression of inflammatory factors and decreased levels of anti-inflammatory factors (2, 3). Increased secretion of inflammatory factors is the major cause of mild inflammation in the adipose tissue. Some studies have identified immune cell infiltration into adipose tissue, which secretes inflammatory factors, as a key factor in the inflammation (4-6). For unknown reasons, under inflammation conditions, M2 phenotype macrophages, which are mainly anti-inflammatory in lean conditions, are replaced with a variety of M1 phenotype macrophages, which secrete the inflammatory cytokines, and its result is justification of pathogenesis of obesity-induced insulin resistance (7, 8). CD86 is from the M1 phenotype group and CD206 is from the M2 group phenotype. There are pieces of evidence where in the obese condition the CD86 levels increase (9, 10). CD206 plays a role in cell repair and recovery (11-13). Aerobic training (14) are recommended as an appropriate way to prevent and treat inflammation-induced problems. Sympathetic mimicking phytochemicals can also decrease the inflammation process by increasing lipolysis and altering adipose tissue metabolism (15, 16). Octopamine (O) is an endogenous amine that, due to its close association with norepinephrine, can mimic the sympathetic function in many tissues and act as neurotransmitter invertebrates. O affects adrenergic and dopaminergic systems (17). The effects of O are included antioxidant (18), anti-inflammatory (19), weight loss, and fat burning (20).

In regards to noted sentences the present study aimed to review the effect of AT and O supplementation on macrophage markers in white adipose tissue of rats poisoned with deep-fried oil (DFO).

A total of 30 male Wistar rats, aged 20 weeks, weighing 300 - 350 g were purchased from Razi Institute (Iran). The rats were kept in standard conditions for one week to adapt to the laboratory environment. Rats were divided into groups including healthy control, DFO control, AT + DFO, O + DFO, and AT + O + DFO. During four weeks the O groups received 81 μmol/kg octopamine for five days/week intraperitoneally and AT groups performed training with moderate intensity.

A total of 8 liters of sunflower oil was used to produce heated oil. The oil was heated for four consecutive days for eight hours at a temperature of 190 - 200ºC and chicken nuggets, potatoes, poultry, and protein products (sausages and sausages) were dipped into the oil every 30 minutes, according to references, and finally, the fourth-day oil was kept for use as a poisoning intervention and fed orally to rats for four weeks (21).

Forty-eight hours after the last intervention, rats fasted for 8 - 10 hours and were weighed before sacrificing. The anesthesia was inhaled with chloroform. Blood samples were taken from the left ventricle. The white adipose tissue was then rapidly removed, washed with saline, and placed in microtube. Samples were transferred into a nitrogen tank and then stored at -80ºC until cell analysis.

Cell isolation was done from adipose tissue by tripsine 0.25% and DNase in 37ºC for 30 min and centrifuged at 4ºC, 1200 RPM for 5 min. Single cells were used to identify monocyte/macrophage lineage surface markers CD206 and CD86 antibodies. Flow cytometric analysis was performed using a Navios Flow Cytometer and the Kaluza analysis software (Beckman Coulter, Milan, Italy), evaluating a total of 5 × 105 cells and detecting more than 30 events in the smallest subset investigated, according to consensus guidelines on the minimal residual disease.

Samples were placed into a 30% sucrose solution prepared in PBS for three days at 4ºC. Samples were removed from the sucrose solution and placed directly into a “cryomold” containing sufficient optimal cutting temperature compound (OCT) embedding media to fully submerse the tissues. The entire cryomold was then placed onto the cryobar inside the cryostat and, by using a press tool. Frozen tissues were recovered from the cryomold and affixed to a textured cryosectioning plate using OCT as an adhesive. Each section was then placed in separate dry microscope slides (thickness: 8 µm). Placing sections directly into PBS quickly dissolves any residual OCT and ensures that the sections stay hydrated; the hydration step improves overall image quality. H & E staining was done and the pictures were captured and analyzed by Image J to count adipocyte cells.

In the descriptive section, the mean (M) and standard deviation (SD) indices were used. Inferential statistics and hypothesis testing were analyzed using two-way analysis of variance for independent groups. Based on this model, at first, the effect of AT and O alone on the outcome was analyzed and the interactive effects of AT and O on outcomes were tested. To determine the effect of poisoning with DFO on outcomes of the study, independent sample t-test was performed for independent groups of healthy control and DFO control groups. Significance level was considered P < 0.05 for all calculations. CD86 cell percentage in different groups of the present study. Data are reported as mean ± SD. All groups had deep- fried oil consumption for four weeks. CD206 cell percentage in different groups of the present study. Data are reported as mean ± SD. All groups had deep-fried oil consumption for four weeks.

The Flowcytometric assessment of MI and MII macrophage markers in adipose derived cells in different experimental groups of the present study are shown in Figure 5. Results showed that the number of adipose cells in visceral adipose tissue was higher in the DFO control group than the other groups. In addition, the results showed that in a certain unit of tissue, this cell population was also increased in the AT and O groups compared to the healthy control group. However, these two groups had significantly less adipose cells than the DFO control group. In the AT and O groups, these cells were significantly reduced, which was not significantly different from the healthy control group. Based on the histological images, it was found that in the groups that had increased adipose cell population, the diameter of each adipose vacuole decreased, however, in the groups that had decreased cell population, the adipose vacuoles diameter increased. It seems that as the amount of DFO in the groups increases, the adipose cell population first increases and then the cells begin to become obese and hypertrophy, which this trend indicates a gradual increase in adipose tissue (Figure 6). Another finding of the present study showed that O administration decreased CD86 levels and increased CD206 in adipose tissue. O enhances the process of lipolysis by activating β3-adrenoceptors in adipose tissue (31). Increased lipolysis in adipocytes attenuates the accumulation of fatty acids and this decrease weakens the inflammatory mediators (24). As a result of the decrease in inflammation, macrophage permeability to adipose tissue decreased and a change in macrophage pattern from M1 to M2 phenotype is observed (7, 25). Interaction of AT and O on reduction of CD86 was significant. Both AT and O appear to decrease the permeability of these macrophages through decreasing adipose cell size and inflammatory mediators. Although in the AT + O group the CD206 levels were higher than AT and O groups alone, the observed interaction was not statistically significant. It appears that the effect of AT and to some extent O is more on the M1 phenotype than on the M2 phenotype.

The results of this study showed that feeding with DFO changed the permeability of adipocytes to macrophages and increased CD86 entry and decreased CD206. Nonetheless, AT can affect this migration process and reduce CD86 penetration into adipose tissue, although it did not affect CD206 penetration. However, O was able to alter the permeability of adipose tissue to macrophages and reduces the negative effects of feeding with DFO. Interaction of AT and O was significant only on CD86. It appears that AT and O were more influenced on the process of M1 phenotype than M2. Nevertheless, the decrease in adipose cell size may be the main cause of the change in macrophage permeability in adipose tissue. The anti-inflammatory effects of AT and O appears to be justified by these changes. However, further studies are needed.

Due to the fact that the present study is a part of the doctoral dissertation approved by Central Tehran Branch of Islamic Azad University, the authors of this article express their gratitude and appreciation for the spiritual support of the Research and Technology Department of this university branch.

Copyright © 2020, Gene, Cell and Tissue. This is an open-access article distributed under the terms of the Creative Commons Attribution-NonCommercial 4.0 International License (http://creativecommons.org/licenses/by-nc/4.0/) which permits copy and redistribute the material just in noncommercial usages, provided the original work is properly cited.
download pdf 2.50 MB Peer Review Comments ( 107.49 KB) Get Permission (article level) Import into EndNote Import into BibTex
Number of Comments: 0