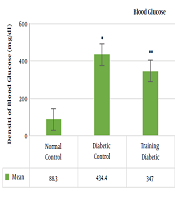 Effects of Eight Weeks of Combined Training with Antioxidant Vitamins E and C on Glutathione, Glutathione Peroxidase, and Superoxide Dismutase in the Heart Tissue of Streptozotocin-induced Diabetic Rats

Diabetes leads to metabolic disorders in the heart by creating free radicals and compromising the antioxidant defense system.

The aim of this study was to investigate the effect of eight weeks of combined training and supplementation with antioxidant vitamins E and C on the antioxidant capacity of heart tissue in streptozotocin-induced diabetic rats.

Antioxidant supplementation and training by reducing the harmful effects of hyperglycemia strengthen the antioxidant defense system of heart tissue, and the combination of the two interventions is more effective than either alone.

Diabetes is one of the most important metabolic disorders characterized by elevated blood sugar (hyperglycemia) due to impaired or inefficient insulin secretion (1). One of the most important factors in heart failure is the level of blood sugar, which increases the risk of ischemia and mortality by reducing the protective effects of the heart (2). Metabolic changes in hyperglycemia, with increased oxidative stress, lead to myocardial molecular abnormalities and mitochondrial dysfunction and the gradual loss of heart stem cells and cardiovascular complications.

In response to hyperglycemia, the antioxidant defense system reduces the antioxidant enzymes glutathione (GSH), glutathione peroxidase (GPx), and superoxide dismutase (SOD), and knowledge of molecular pathways will lead to new preventive and therapeutic approaches (5). The incidence of oxidative stress and disrupted balance of oxidants and antioxidants create destructive effects on cells, and antioxidant enzymes act to prevent the occurrence of free radical chain reactions and modulate oxidative stress (6).

Glutathione is a powerful antioxidant with a protective effect on cells against reactions. Glutathione peroxidase protects organisms against oxidative damage, and superoxide dismutase is the first line of enzymatic defense against free radicals (7). Water-soluble vitamin C is a strong radical scavenger with a glucose-like structure that plays a role in insulin release and hyperglycemia improvement (8); vitamin E helps improve insulin function by inhibiting the protein kinase C enzyme (9).

Another factor affecting hyperglycemia is exercise, which causes a decrease in free radicals (10). Research shows the effect of regular and moderate endurance training on increasing insulin sensitivity (11), resistance training on enhancing lipid peroxidation and antioxidant capacity (12), eight weeks of aerobic training, consumption of vitamin C, and a combination of both on promoting antioxidant enzymes in diabetic patients (13), and eight weeks of endurance exercise training on decreasing GPx activities (14). Continuous training alone can significantly elevate the mean concentrations of SOD and GPx (15) .

Due to the lack of sufficient studies and clear results regarding the effect of combined training (resistance and endurance) and antioxidant supplementation on the performance of the antioxidant defense system in diabetic patients and the scientific need of society to improve the quality of life and prevent complications, the results of this research can be used by medical and sports researchers to scientifically enhance the physical and nutritional activities of athletes and diabetic patients.

This study aimed to investigate the effect of eight weeks of combined training with antioxidant vitamins E and C on GSH, GPx, and SOD in the heart tissue of streptozotocin-induced diabetic rats.

In the experimental study, 60 male Sprague Dawley rats aged 2.5 - 3 months (mean weight: 280 ± 20 g) were selected and randomly divided into the five groups of healthy control, diabetic control, diabetic + combined training, diabetic + C and E supplementation, and diabetic + combined training + C and E supplementation. The rats were kept in an animal house with a temperature of 22 ± 2°C, humidity of 40 - 50%, and a dark-light cycle of 12 - 12 hr. The required food and water were provided to the animals as standard and freely. Induction of diabetes in rats was performed by one intraperitoneal injection of streptozotocin solution dissolved in citrate buffer at pH = 4.5 and an amount of 55 mg / kg rat weight. Five days after the injection, blood glucose concentration was measured using a glucometer and blood sample of caudal vein, and fasting glucose more than (200 mg/dL) was considered as a diabetic sample (16).

Vitamins C and E were acquired from Sigma-Aldrich and Merck, Germany. The vitamins included 1 g of water-soluble ascorbic acid and 600 mg of diol-alpha-tocopherol acetate dissolved in olive oil per kg of animal food. The vitamins were fed to the animals by gavage at a rate of 5 mL per day.

Included resistance training to climb a one-meter ladder by adding weight to the rats' tails and weighing the rats at the end of each week, and after an hour of rest, aerobic training including walking and running on the treadmill was performed five sessions per week based on the maximum speed of piloted diabetic rats for eight weeks, because during the lower period of validity the changes could not be cited and a longer period of training intensity in diabetic conditions could lead to the death of the rats (Table 1).

In each group, 48 hours after the last training program and after anesthesia with a combination of ketamine (100 mg / kg) and xylazine (10 mg / kg) and surgery, the heart tissue of the rats was removed. After cleansing and placement in special vials, they were transferred to the laboratory by cylinders containing liquid nitrogen and were frozen at -80°C until the experiments were performed.

Glutathione measurement was performed in contrast to Ellman's reagent (DTNB) and after setting the protocol in the dark. Then, 500 μL of the sample was precipitated by 500 μL of TCA in a 1-ml vial and centrifuged at 1000 rpm for 5 min, and the supernatant was separated. Afterwards, 500 μL of the centrifuged supernatant was combined with 100 μL of DTNB and 400 μL of Tris buffer, and then the adsorption device was used with zero blank at a wavelength of 412 nm.

Glutathione peroxidase assay was performed through Kolbe reaction. The activity of glutathione reductase (GR) and NADPH oxidation is an indicator of glutathione peroxidase activity, and cumene reagent was used to start the reaction. After calculating the amount of GR, it was combined with 990 μL of buffer, and cumene was combined with 675 μL of ethanol and placed inside in a zero-absorption device. The sample absorption was set at 340 nm wavelength and read for 3 min using a Jenway 6300 spectrophotometer device.

The rate of pyrogallol oxidation is an indicator of SOD activity. In detail, 990 μL of distilled water was combined with 10 μL of stock pyrogallol and poured into a tube and placed in a zero-absorption device, and the sample absorption was set at 420 nm wavelength and read for 5 min.

Statistical analysis was performed in SPSS (version 23) using descriptive and inferential statistics. In descriptive statistics, the mean and standard deviation were used and in inferential statistics, independent samples t-test was used to evaluate the induction of diabetes between the healthy and diabetic groups; also, two-way analysis of variance (ANOVA) and Bonferroni post hoc test were used to compare the diabetic control and treatment groups and determine the effect size. A P-value of less than 0.05 was considered significant.

In Table 2, the results of independent samples t-test indicate a significant decrease in dependent variables in the diabetic control group compared to the healthy control group.

Table 2. Results of Independent Samples t-test for Glutathione in the Healthy and Diabetic Groups

The results of post hoc test showed that the highest amounts of GPx were in the training and supplementation, supplementation, and training groups, which were 0.03, 0.023, and 0.021 nmol/mL, respectively (Figure 3) .

Comparison of the effect size of superoxide dismutase (nmol/mL)

Our results showed a significant reduction in GSH, GPx, and SOD enzymes with the induction of diabetes. Constant increase in radicals and the simultaneous activation of the pathways leading to the increase of free radicals in diabetes reduced antioxidant enzymes. The heart's antioxidant defense system is responsible for protecting the heart from oxidative damage by eliminating reactive oxygen species with the enzymatic antioxidants SOD and GPx and non-enzymatic GSH, ascorbic acid, and alpha-tocopherol.

Exercise increases oxidative stress and free radicals and damages the body's immune system, but at moderate intensity by increasing the capacity of antioxidant enzymes and developing tissue resistance to lipid peroxidation it increases insulin sensitivity in diabetic patients. Eight weeks of moderate-intensity training in the present study was the most effective strategy, which is consistent with the findings of Farhangi (14), Negharestani (15), Shir Ebrahimi (13), and Rami (17). This shows that despite the increase in free radicals with exercise, the adaptations established at moderate intensity over a period of eight weeks promotes the antioxidant defense system.

The positive and multiplied results of concurrent training-supplementation on the increase of enzymes and the development of antioxidant defense system, in line with the findings of Shira Ebrahimi (13) Farhangi (14) and Negharestani (15), were affected by the activation of two effective pathways of training and supplementation.

In the diabetic group, the area below the GPx curve was clearly higher, indicating the extent of pyrogallol oxidation as an indicator of SOD activity and increased free radical activity. With increasing free radicals due to diabetes, the amount of enzyme activity decreases. In the training and supplementation groups as well as the combined training-supplementation group, due to the reduction of free radicals production and increased SOD activity, the area below the curve decreases and a smaller amount of pyrogallol is oxidized and shows a significant difference with the diabetic control group, such that in the training-supplementation and training groups, the amount of this reduction is more noticeable.

Not being able to control the calorie intake and calorie consumption of the rats during the research period and the use of various methods of measuring like western blotting and real-time PCR methods were the limitations of the present study. Therefore, in addition to addressing the above cases future studies are suggested to study the structural damage of heart tissue by apoptotic markers and the tunnel method.

Combined training and concurrent C and E supplementation in diabetic rats play an effective role in reducing the destructive effects of hyperglycemia though increasing glutathione synthesis, the activity of antioxidant enzymes, and their compatibility to cope with the free radicals produced within the mitochondria. However, the concurrent combination of both interventions has a greater impact and a more effective role in the development of the antioxidant defense system in the heart tissue of diabetic rats than each one alone.

The present study is part of a doctoral dissertation approved in 2020, which was implemented with the approval of the Faculty of Physical Education and Sports Sciences, Isfahan (Khorasgan) Branch, Islamic Azad University.

Copyright © 2021, Gene, Cell and Tissue. This is an open-access article distributed under the terms of the Creative Commons Attribution-NonCommercial 4.0 International License (http://creativecommons.org/licenses/by-nc/4.0/) which permits copy and redistribute the material just in noncommercial usages, provided the original work is properly cited.
download pdf 199.86 KB Peer Review Comments ( 89.74 KB) Get Permission (article level) Import into EndNote Import into BibTex
Number of Comments: 0