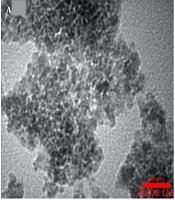 The current study aimed to determine the effect of Fe3O4 nanoparticles (NP) coated with omega-3 on sciatic nerve regeneration in Wistar rats.

The rats' left sciatic nerve was crushed with a non-serrated clamp. Animals in experimental groups were given Fe3O4@ω3 NPs (10 or 30 mg/kg/d) for one week. The recovery of functions was then assessed over eight weeks using a walking track analysis and a hot plate test. In addition, histomorphometry was used to assess the histomorphometric factors.

It was determined that Fe3O4@ω3 NPs had great potential for nerve regeneration due to the ease of their manufacturing and their desired efficacy.

Since full functional recovery following severe nerve injury is uncommon, nerve injuries are regarded as major clinical issues. Following nerve injuries, particularly severe injuries, a cascade of secondary processes such as oxidative stress, inflammation, and excitotoxicity occurs, resulting in expanded injury and creating an inhibitory environment for the sprouting and elongation of injured axons (1). In this regard, inflammatory responses have been shown to play an important role in Wallerian degeneration, axonal regeneration, and functional rehabilitation (2). The immune response triggers a cascade of biological processes that remove growth-inhibiting components from the lesion site and create a favorable environment for axonal regeneration (3). As a result, modulating the inflammatory response may be an effective strategy for increasing the efficacy of nerve regeneration (4).

In this regard, animal research and clinical trials have determined that omega-3, a polyunsaturated fatty acid (PUFA), has anti-inflammatory effects, implying that they may be effective in the management of inflammatory responses (5). Furthermore, omega-3 fatty acids have been reported to display neuroprotective properties when dealing with a variety of neurological diseases (6). In our study, therefore, it was attempted to employ nanotechnology in order for developing a combined therapy method for healing peripheral nerve injury through application of iron oxide (Fe3O4) and Magnetite NPs coated with omega-3. As a carrier, the drug is attached to polymeric NPs, and the NPs facilitate therapeutic agent delivery and absorption into the target tissue (7). Iron oxide NPs have received considerable attention compared to other magnetic NPs due to their unique magnetic properties, biocompatibility, and low cytotoxicity (8).

This study aimed to investigate how Fe3O4 NPs coated with omega-3 affected the sciatic nerve crush model in Wistar rats.

The synthesized NPs were analyzed by X-Ray diffraction, FT-IR spectrophotometer, VSM, and TEM.

A total of 40 adult male Wistar rats (240 ± 20 g) were purchased and kept in plexiglass with standard condition. They were randomly allocated into four groups. Rats in two experimental groups were given Fe3O4@ω3 NPs intraperitoneally at doses of 10 or 30 mg/kg daily for one week (8). Also, animals in the negative control group underwent crushing and received deionized water as a vehicle. In the sham group, only the sciatic nerve was exposed. All animal experiments were approved by the ethical committee of Mohaghegh Ardabili University of Ardabil (Iran) under code number: IR.ARUMS.REC.1400.08.

The sciatic functional index (SFI) was measured at two, four, six, and eight weeks after surgery according to the previous method (9, 10).

A hot plate latency test was performed to evaluate the sensory recovery. Tests were performed at 2, 4, 6, and 8 weeks after surgery. The temperature was set at 54°C. Then, the rats' operated legs were located on a hot plate, and their reaction was recorded as response latency.

Histomorphometric analysis of regenerated nerves was carried out eight weeks after surgery according to the previous method (10).

Gastrocnemius muscles from all groups were harvested, and then Masson's trichrome staining was used to assess the severity of muscle atrophy.

Gastrocnemius muscle samples of all groups were dissected and harvested. Then, their wet weights were calculated using a Pohl Schmitt digital scale (Switzerland).

SPSS Statistics 16.0 software was used to analyze the statistical data, and all data were presented as a mean ± SEM. The P-values lower than 0.05 were considered significant. Statistical significance between groups was determined by using ANOVA test and Tukey post hoc test.

And were found to be about 13 and 7 nm, respectively. In addition, the lattice constant of the coated particles was nearly 8.324 Å, which was decreased proportional to the bare one (8.376 Å). 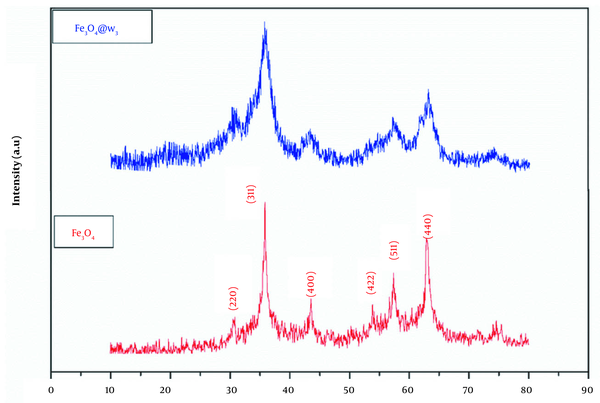 Figure 2A and B displays the TEM and SEM images of the Fe3O4@ω3 NPs. Obviously, NPs had an approximately uniform size distribution, and their size was smaller than 10 nm, which was in close agreement with XRD data (Figure 2A). According to both the TEM and SEM images, particles appeared to be quasi-spherical, and some aggregation was observed due to their magnetic nature. 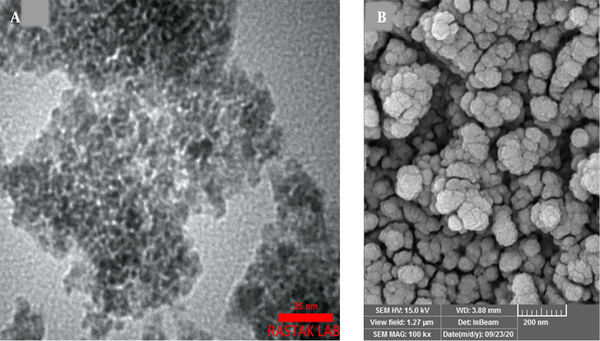 FT-IR spectra of the ω3 and Fe3O4@ω3 samples are presented in Appendix 1. The spectrum of ω3 exhibited absorption bands between 1000 - 1500 cm-1 that were related to C-O and C-H vibrations. An absorption band occurred at 1745 cm-1 which corresponded to the C=O vibration. In addition, the stretching vibrations of the -C-H (CH2) bands were observed at 2855 and 2924 cm-1. The spectrum of Fe3O4@ω3 presented two absorption deeps at 445 and 625 cm-1 that were in accordance with Fe-O vibrations in the spinel structure. Furthermore, the absorption band of C=O became very weak and the characteristic band of the C-O vibration shifted to the lower frequencies, which confirmed the interaction between ω3 and the surface of magnetite NPs.

The magnetic properties of the bare and coated magnetite NPs were measured using VSM at room temperature. According to Appendix 2, both samples are superparamagnetic with nearly zero coercivity. Due to the very small size of the particles and the biocompatible shell on their surface, moreover, the saturation magnetization of the omega-3 loaded NPs was decreased proportional to the bare one.

Results showed that the SFI values in all groups were reduced after surgery (Figure 3). Then, SFI values in all groups were increased progressively, with a significantly higher improvement detected in Fe3O4@ω3 NP groups (P < 0.05; Figure 3) in increased progressively with the negative control group. Also, the best nerve recovery in comparison with the negative control group was seen in Fe3O4@ω3 NP (30 mg/kg) group six weeks after surgery (P < 0.05; Figure 3). 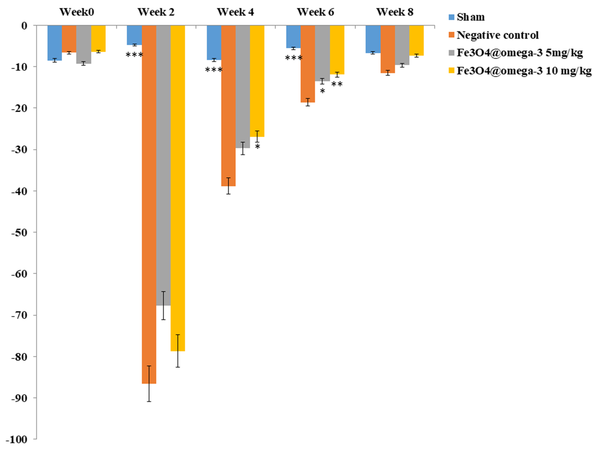 Rats in all groups showed no reaction to the hot plate two weeks after surgery, except for the sham group which reacted after 0.97 seconds. Sensory recovery after nerve surgery (4, 6, and 8 weeks) improved gradually in all groups, with a noticeably faster recovery detected in the Fe3O4@ω3 NPs groups (P < 0.05; Figure 4). 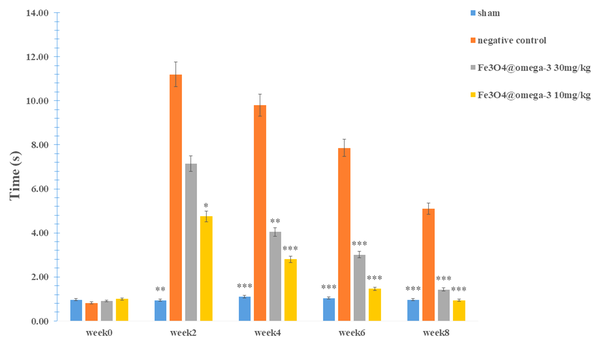 Table 1 . Morphometric Parameters in all Experimental Groups 8 Weeks after Surgery

a Values are expressed as mean ± SEM.

As shown in appendix 4, the muscle fibers were stained in red, whereas the collagen fibers showed the blue staining. Denervated muscles in nerve crush groups displayed varying degrees of atrophy compared to those in the sham surgery group. However, the atrophy in the Fe3O4@ω3 NPs-treated groups was significantly lower in the negative control group.

The administration of neuroprotective medications after nerve injuries is an effective method for limiting damage and enhancing nerve regeneration. Utilizing nanotechnology to synthesize neuroprotective agents can improve pharmacotherapy efficacy (7, 11). In this regard, magnetic NPs such as Fe3O4 are effective nano systems for managing drug delivery (12, 13). In addition, magnetic NPs have a synergistic impact on the target site, improve therapeutic outcomes, and prevent drug degradation (14, 15). Our findings revealed that one-week treatment with Fe3O4@ω3 NPs (10 or 30 mg/kg) after a sciatic nerve injury had the potential to increase the nerve regeneration. Walking track analysis demonstrated that Fe3O4@ω3 NPs at 10 or 30 mg/kg doses were effective in enhancing motor recovery. However, only Fe3O4@ω3 NPs at a dose of 30 mg/kg were capable of increasing SFI values significantly compared to the negative control group. Moreover, muscle mass ratio and histomorphometric parameters were also considerably improved in Fe3O4@ω3 NPs at 30 mg/kg compared to negative control, confirming the results from the walking track analysis. Furthermore, the hot plate test results suggested that Fe3O4@ω3 NPs-treated (10 or 30 mg/kg) therapy reduced the sensory threshold.

According to our findings, increased tissue levels of omega-3 using Fe3O4 as a carrier improved sciatic nerve regeneration in a rat crush model. Omega-3 fatty acids cannot be produced in the body and must therefore be obtained from diets or supplements (16). Omega-3 has been proven to have many biological effects, including boosting the synthesis of anti-inflammatory and neuroprotective metabolites via prostaglandin metabolism (17). On the other hand, animal research have indicated that omega-3 fatty acids may contribute to neuronal survival and axonal healing following peripheral nerve injury (18). In an in vitro study, Robson et al. (2010) reported that omega-3 PUFA had a significant neurite-promoting capacity in neurons from adult and aged animals (19). In a study by Baazm et al. (2021) to evaluate the protective effects of parenteral administration of omega-3 on spinal cord injury in rats, it was discovered that omega-3 treatment increased motor function recovery and reduced inflammation (20). Pu et al investigated the neuroprotective effects of a 2-month omega-3 polyunsaturated fatty acid (PUFA)-enriched diet against controlled cortical impact (CCI) in mice, and found that an omega-3-rich diet reduced behavioral deficits (21). Furthermore, several clinical trials on diabetic patients have shown that long-term omega-3 diets can improve diabetic neuropathy, promote nerve regeneration, and restore sensory function (22). Omega-3 appears to prevent oxidative stress-induced apoptosis by decreasing pro-apoptotic signaling and suppressing pro-inflammatory responses (23).

On the other hand, some researchers have found that NPs can effectively promote the growth of injured axons (24, 25). Liu et al., for instance, investigated the role of nano-hydroxyapatite in regeneration in cultured brain cells of rats. According to their findings, nano-hydroxyapatite induced axonal guidance growth by regulating netrin-1 expression as an axonal guidance cue during nerve regeneration. Furthermore, some studies have indicated that a single application of Fe3O4 can cause significant axonal guidance, but it has a cytotoxic effect on cell viability. When nanohydroxyapatite-coated magnetic Fe3O4 (Fe3O4n-HA) particles were added to primary cultured DRG neurons in our study, however, the cytotoxicity of single magnetic NPs Fe3O4 was reduced. Moreover, Fe3O4n-HA was able to efficiently direct axonal guidance and greatly promote axonal elongation (26). Chen et al. also investigated electrospinning multilayered scaffolds loaded with melatonin and Fe3O4 magnetic NPs in order for repairing sciatic nerve defects in rats, and found that scaffolds had the adequate biocompatibility and potential to improve morphological, functional, and electrophysiological parameters. Other studies have determined that NPs are capable of improving the mechanical properties of neural conduits (27). In some experiments, Fe3O4 NPs have also been shown to increase neurite outgrowth by stimulating the mitogen-activated protein kinase signaling pathway (28).

In sum, it was found that a one-week treatment of Fe3O4@ω3 NPs rats with sciatic nerve defects may have improved the regeneration process and rehabilitation. Our study results confirmed the neuroprotective effects of Fe3O4@ω3 NPs as new drug. It was also demonstrated that Fe3O4@ω3 NPs had great potential for nerve regeneration due to the ease of their manufacturing and their desired efficacy. However, it was recommended that further studies should be conducted in order to confirm our findings.

This study faced some limitations, one of which was the lack of molecular data about the expression of neurotrophic factors in drug-treated groups.

Copyright © 2022, Author(s). This is an open-access article distributed under the terms of the Creative Commons Attribution-NonCommercial 4.0 International License (http://creativecommons.org/licenses/by-nc/4.0/) which permits copy and redistribute the material just in noncommercial usages, provided the original work is properly cited.
download pdf 3.09 MB Download Supplementary Material Get Permission (article level) Import into EndNote Import into BibTex
Number of Comments: 0