A workplace has an important role in staff health. Besides, it is a suitable place for performing interventions to reduce the risk of suffering from health problems associated with physical inactivity and overweight, and to reduce risks of cardiovascular and non-communicable diseases.

This study aims to investigate the effects of health promotion educational interventions on self-care behaviors of nutrition and physical activity among the selected university staff in Zahedan during the COVID-19 pandemic.

The present quasi-experimental research was conducted in 2020-2021 in Zahedan, southeastern Iran. The control and intervention groups included a random selectionof 110 and 144 non-academic staff members of Zahedan University of Medical Sciences (ZAUMS) as well as Sistan and Baluchestan University (SBU), respectively. At the beginning of the COVID-19 pandemic, an online researcher-made questionnaire (Porsline, https://survey.porsline.ir) (CVR: 92%; CVI: 90%; reliability: 85%) was uploaded, which had been already approved. Besides, educational booklets were provided to the intervention group via WhatsApp and Soroush messengers, through which the participants were allowed to ask their questions after every session. One month after the intervention, the online questionnaires were re-uploaded on Porsline and recompleted by the participants. The results were analyzed using SPSS V21.0.

The educational program executed in the present study was shown to be effective in promoting self-care behaviors of nutrition and physical activity among the university staff. Thus, health programmers and policymakers can have a significant role in promoting staff health by executing interventional educational programs. Accordingly, the efficiency of the whole system will improve by adopting these strategies and programs.

A workplace has a significant role in maintaining staff health. Thus, if the required conditions and facilities are provided to deal with health and self-care issues in the workplace, it is likely that wrong habits leading to the occurrence of non-communicable diseases will reduce, thereby boosting efficiency of the whole organization (1). Over half of early deaths result from factors associated with an unhealthy lifestyle. Thus, it is essential to provide, preserve, and promote staff health that affects their lifestyle (2). A healthy workplace is not merely defined in terms of the lack of potential conditions associated with diseases or disabilities. In contrast, the main feature of a healthy workplace is the existence of health promotion and welfare signs and components (3, 4). Based on the estimates made by the International Labor Organization, as many as 2.34 million people lose their lives annually as a result of accidents or labor-associated diseases, with 314 million people suffering from occupational injuries (4). In addition to their direct costs, accidents lead to indirect costs four times more than direct ones, including reduced credit (5). These figures indicate the significance effect of the issue on health promotion among the staff. These facts necessitate conducting preventive interventions in terms of staff health promotion (6). In addition to increasing staff efficiency, interventions conducted for staff health promotion in the workplace can reduce healthcare costs of the staff, being of high significance in countries where health insurance premiums are directly paid by employers. Moreover, most of the employers assert that deteriorated health conditions are directly associated with reduced efficiency, safety, and spirit among the staff (7). Most of the studies have focused on the strategies of physical activity and healthy nutrition among individuals in the workplace. In fact, any changes in an individual's behavior directly affect the change desired for the policies of an organization and its social environment. These interventions have reduced overweight, obesity, and medical costs in the workplace (8). The results of a cost-effectiveness meta-analysis of physical activity and nutrition interventions indicated that they were effective in reducing the cholesterol levels and risks of cardiovascular diseases (9, 10). The present job diversity and staff involvement in health problems necessitate systematic health planning and health need assessments for the purpose of promoting self-care health and safety in the organizational environment by increasing awareness, attitude, and performance among the staff. Besides, research indicates that the cost-effectiveness of health interventions is by far more than the costs of medicine, cessation of work, disabilities, and workflows of the staff. Against this background, the present study aims to investigate health programs in the workplace and their effects on the staff of both Zahedan University of Medical Sciences and University of Sistan and Baluchestan, Zahedan.

The present quasi-experimental was conducted in the time period of 2020 to 2021 in Zahedan, southeastern Iran. The control and intervention groups included a random selection of 110 and 144 non-academic staff members of Zahedan University of Medical Sciences (ZAUMS) as well as Sistan and Baluchestan University (SBU), respectively. In each of the mentioned universities, based on random blocks and the participants' consent to participation in the study, the subjects were included in the study. Accordingly, the number of the people working in each unit of Sistan and Baluchestan University, who entered the study, was equivalent to that of the people working in the same unit of Zahedan University of Medical Sciences, with the same range of work experience. A researcher-made questionnaire was created, which included the two variables of nutrition and physical activity. Each variable included three constituents of knowledge (10 questions), attitude (10 questions), and performance (10 questions). The questionnaire validity was evaluated by a panel of experts, with a CVI of 90% and a CVR of 92% obtained. Based on the data from a sample of 20 staff members, the Cronbach's alpha was determined at 85%. However, this sample was excluded from the results of the study. This study was approved by the Ethics Committee of Zahedan University of Medical Sciences (IR.ZAUMS.REC.1397.489 – 9067). All the participants signed a consent form for participating in the study after they were briefed on the study, its duration, and educational interventions.The questionnaire was designed on an online Iranian platform (Porsline, https://survey.porsline.ir) and sent at the participants' address using WhatsApp and Soroush messengers. After receiving the completed questionnaires, two educational booklets and two virtual educational videos that were recorded in Camtasia were uploaded on the website of Sistan and Baluchestan University. Besides, the educational booklets were provided to the intervention group via WhatsApp and Soroush messengers, where the participants were allowed to ask their questions after every session. One month from conducting the educational intervention, the questionnaires were re-uploaded on Porsline as a posttest. The data were described by frequency, percentage, as well as mean ± SD. Besides, analysis of covariance was performed to compare the mean of outcome variables in the posttest between the intervention and control groups after adjusting for pretest scores. In addition, data were analyzed in SPSS V21.0.

Table 1. Demographic Characteristics of the Participants in the Intervention and Control Groups a

After adjusting for pretest scores, the mean posttest knowledge of nutrition was not significantly different between the intervention and control groups (P = 0.418). However, nutrition attitude (P < 0.001) and performance (P < 0.001) were significantly different between the two groups so that the posttest mean score was greater in the intervention group (Table 2).

Table 2. Mean Scores of Knowledge, Attitude, and Performance for Nutrition and Physical Activity Before and After the Intervention

a P-value for comparing the mean of post-test scores between the intervention and control groups after adjusting for pretest scores using analysis of covariance. 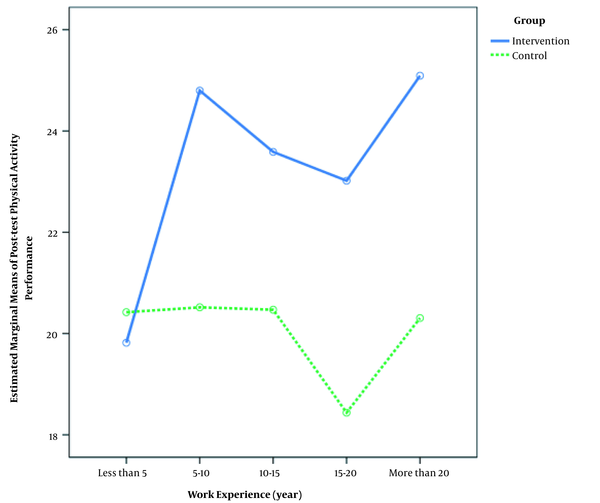 Correlation between the physical activity and work experience with intervention performance

According to the results, nutrition behavior was significantly better in the female staff than in the male ones (P = 0.048), yet there was no correlation between gender and the intervention (P = 0.266) (Figure 2). 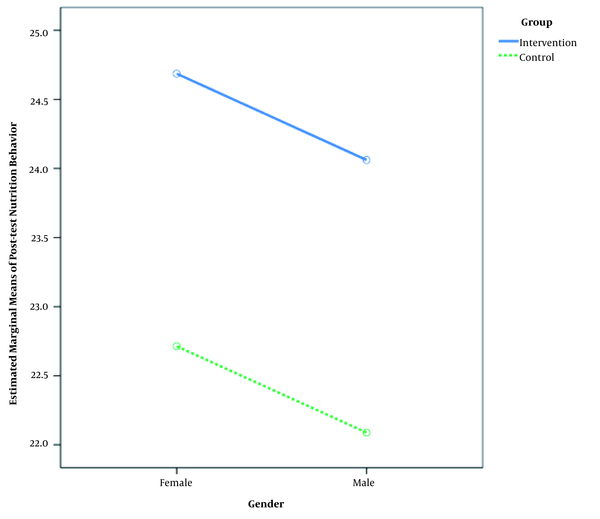 Correlation between nutrition behavior and gender with intervention performance

A limitation of the present study was the short time of the meetings due to the attendance impossibility of the staff for their working time. Due to the high engagement of employees in work activities, using online intervention sessions and training packages could help them change their behaviors to healthy behaviors.

The results of the present study showed that the virtual education intervention as well as the designed educational package were effective in promoting awareness, attitude, and performance scores in terms of self-care behaviors of nutrition and physical activity among the staff of Sistan and Baluchestan University. Besides, it is recommended that the present educational intervention be conducted in other organizations and offices.

The present study is the result of a research project entitled "the effect of education interventions on promoting staff in selected universities in Zahedan". The staff of both universities (Sistan and Baluchestan University of Medical Sciences as well as Zahedan University of Medical Sciences) are highly appreciated for their cooperation in the present study.