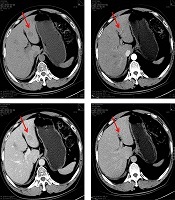 Markedly Elevated HE4 in Hepatic Neuroendocrine Neoplasm: A Report of Two Cases and Literature Review

Human epididymis protein 4 (HE4) is a secretory protein encoded by the whey-acidic four-disulfide core domain protein 2 (WFDC2) gene. Clinically, HE4 is an important serological biomarker used to detect and monitor epithelial ovarian cancer. Although elevated in a high percentage of patients with ovarian and endometrial cancer, high serum HE4 levels may also be detected in patients with other various non-gynecologic malignant disorders such as lung adenocarcinoma and breast cancer. However, the association between high HE4 and hepatic neuroendocrine neoplasms (HNENs) remains unknown.

Herein, two patients with HNENs and elevated serum HE4 are presented. Both cases were old women who underwent pelvic examination and ultrasonography and the results were normal. Immunohistochemistry assays demonstrated high HE4 expression in neuroendocrine carcinoma, whereas no HE4 expression was observed in hepatocellular carcinoma and clear cell renal cell carcinoma liver metastases.

This preliminary observation suggested HE4 concentrations may be elevated in neuroendocrine neoplasm patients with no ovarian cancer. Thus, HE4 results should be interpreted cautiously in female patients with HNENs. In addition, this preliminary observation suggested the need to perform further studies to assess the implications of our results in terms of the potential role of HE4 as a serum biomarker in the diagnosis and prognosis of HNEN patients.

Neuroendocrine neoplasms (NENs) represent a heterogeneous group of slow-growing tumors. They commonly metastasize to the liver and the presence of liver metastases may be responsible for the main determinant of survival. The reported five-year overall survival rates range from 13 to 54% in neuroendocrine tumor liver metastases compared to 75% to 99% in non-metastatic neuroendocrine tumors (1). The number of patients with NENs increased over the past 30 years (2); however, there is no consensus on the use of available biomarkers for early diagnosis, recurrence, and disease monitoring during treatment (3, 4).

Human epididymis protein 4 (HE4) is a secreted protein that has been suggested as a tumor biomarker in both the diagnosis and prognosis of epithelial ovarian and endometrial cancer (5, 6). However, HE4 is far from being exclusive to the aforementioned types of cancer and it is also strongly expressed in lung, breast, and pancreatic adenocarcinoma tissues (7-9). Subsequently, these results have encouraged the transition of this biological biomarker into other tumors such as NENs. Here, we report two cases illustrative of the association between hepatic neuroendocrine neoplasms (HNENs) and HE4 elevations, demonstrating that marked elevations of HE4 expression can occur in HNENs.

Enhanced CT scan of the abdomen visualized multiple hypodense lesions in the liver and contrast-enhanced ultrasonography demonstrated solid hepatic lesions (Figure 1). An ultrasound-guided fine-needle aspiration biopsy of the liver was done and histopathology confirmed metastatic neuroendocrine neoplasm from the lung. To exclude a gynecological cause of the markedly elevated HE4 level, pelvic examination and ultrasonography were performed and the findings were normal. Subsequently, immunohistochemical studies demonstrated that the hepatic neuroendocrine neoplasm component (Figure 2A) was strongly positive for HE4 monoclonal antibody (clone UMAB88, ZSGB-BIO, Beijing, China). In contrast, both hepatocellular carcinoma (Figure 2C) and clear cell renal cell carcinoma (Figure 2D) liver metastases were negative. The patient declined further chemotherapy and she was discharged from the hospital. At the last follow-up (nine months after discharge), she was alive and generally in good condition without further chemotherapy. In May 2019, a 63-year-old female presented to the emergency department of our hospital with abdominal pain on and off for two years and recent aggravation of symptoms for two days. The pain was located in the right upper abdomen, intermittent, colicky, and occasionally accompanied by nausea and vomiting. Frequently, epigastric pain would come on when she was hungry. The patient was a nonsmoker and denied any history of exposure to carcinogens. Computed tomography showed a 7.7 × 8.1 cm mass lesion in segment 6 of the liver and a 5.7 × 3.3 cm lesion in the uncinate process of the pancreas (Figure 3). Ultrasound-guided fine-needle aspiration biopsy of the liver demonstrated the diagnosis of hepatic neuroendocrine neoplasms with a pancreatic origin. Laboratory investigation revealed normal liver function tests and the normal level of CEA (1.7 ng/mL), CA-199 (0.8 U/mL), CA-125 (27 U/mL), and AFP (1.9 ng/mL). Hepatitis A, B, and C were all negative and serum HE4 was 1,311 pmol/L (reference range 0 - 150 pmol/L). A gynecological cause of the markedly elevated HE4 level was ruled out because of normal pelvic examination and ultrasonography.

Subsequently, immunohistochemical studies confirmed that hepatic neuroendocrine neoplasm component (Figure 2B) was strongly positive for HE4 monoclonal antibody (clone UMAB88, ZSGB-BIO, Beijing, China). However, the patient refused further treatment and she was discharged from our hospital. At the last follow-up (five months after discharge), the patient was alive and denied any chemotherapy.

To the best of our knowledge, this is the first observation of high HE4 levels in hepatic neuroendocrine tumors although elevations in HE4 have been well described as a putative biomarker in endometrial (6, 10), pulmonary (11, 12), ovarian, and gastric (5, 13) tumors.

The functional contribution of HE4 to cancer is not well understood; however, ongoing studies (14, 15) provided evidence that HE4 may promote tumor pathogenesis and progression through pathways associated with cell proliferation, tumor growth, cell invasion and migration, chemoresistance, and metastasis (16). Neuroendocrine liver metastasis accounts for 10% of all hepatic metastatic neoplasms (17) and is an important prognostic factor in neuroendocrine tumors (18). A fundamental issue in NENs is the absence of a set of tumor biomarkers that have potentialities for accurate diagnosis and early detection of the disease, precise determination of residual disease, minimal disease detection, and demonstration of failure/efficacy of therapy (19). Currently, the default biomarker for the diagnosis and follow-up of NENs is Chromogranin A (CgA), which is associated with all types of gastroenteropancreatic neuroendocrine tumors (1). Because of spurious elevation in other episodes such as the administration of proton pump inhibitors, CgA is generally considered a controversial first-line diagnostic marker for NENs (20). This underscores the importance of circulating markers for determining NENs.

Both of our cases showed elevated HE4 serum levels; the protein expressions are elevated in female patients with HNENs. However, these two women had normal pelvic examination and ultrasonography. Thus, our findings bring to attention that HE4 results should be interpreted cautiously in old women with neuroendocrine liver metastases.

In summary, our preliminary observation suggested the need to interpret cautiously HE4 results in women with HNENs.

This case report describes for the first time both the elevated serum HE4 level and positive HE4 expression in the liver biopsy tissue in hepatic neuroendocrine tumors. Our observation suggested that HE4 concentrations may be markedly elevated in neuroendocrine neoplasms and thus, HE4 results should be interpreted cautiously in women with HNENs.

We believe the information obtained from this observation could advance the understanding of hepatic neuroendocrine tumors and facilitate the development of a new biomarker (HE4) to alter the current diagnosis paradigm for HNENs.

Copyright © 2020, Author(s). This is an open-access article distributed under the terms of the Creative Commons Attribution-NonCommercial 4.0 International License (http://creativecommons.org/licenses/by-nc/4.0/) which permits copy and redistribute the material just in noncommercial usages, provided the original work is properly cited.
download pdf 6.47 MB Get Permission (article level) Import into EndNote Import into BibTex
Number of Comments: 0