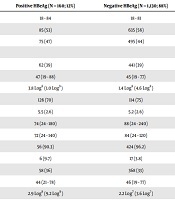 HBsAg is synthesized in the endoplasmic reticulum and is necessary for the formation of complete HBV particles. A decreased synthesis of this antigen leads to an intracellular inhibition of virus production.

The study aimed to assess the incidence of HBsAg elimination among 1,290 patients who suffered from chronic HBV infection undergoing an antiviral treatment with nucleoside or nucleotide analogs (NAs). Furthermore, possible predictive factors for this elimination were analyzed.

A permanent HBsAg loss was confirmed in 3% of the patients, which was more frequent in men than in women (4.4% vs. 1.9%; P = 0.009). The HBsAg elimination occurred in 5% of HBeAg (+) patients and 2.8% of HBeAg (-) patients. The age of patients whose HBsAg was eliminated was higher than the age of the remaining patients (60 vs. 51 y/o). The effect of initially used pegylated interferon alfa (PEG-IFN) therapy on the HBsAg elimination was not observed. It occurred with the use of entecavir (ETV) and tenofovir (TDF); however, among patients treated with ETV, HBsAg was significantly more often eliminated in HBeAg (+) patients.

The HBV prevalence in Europe ranges from 1 to 7% (1). Infection with this virus may lead to liver cirrhosis and hepatocellular carcinoma (HCC). In HBV-infected patients, there is an integration of changed viral DNA with human deoxycholic acid of the host that may stimulate both the development of primary neoplastic cells and the inhibition of apoptotic processes that favor this process.

As known, 90% of HCC cases are diagnosed in patients with HBV, HCV, liver cirrhosis, and fatty liver. The development of this tumor is associated with genetic and epigenetic predispositions, activation of cell oncogenes, and inactivation of tumor suppressor genes. Chronic HBV infection decreases the quality of life and constitutes a real life-threat.

The viral pre-S1 protein contains hepatocyte binding sites and plays a key role in the synthesis of HBsAg and subsequent virion assembly. HBsAg is synthesized in the endoplasmic reticulum and the Golgi apparatus. In the cytoplasm, it connects with the HBV genome and creates a complete viral particle. A decreased HBsAg synthesis leads to the intracellular inhibition of virus production.

The study aimed to assess the frequency of HBsAg elimination among patients suffering from chronic HBV infection undergoing antiviral treatment with nucleoside or nucleotide analogs (NUCs). Possible predictive factors of this elimination were analyzed, such as the duration of HBV infection, sex, age, HBeAg status, initial viremia, and the type of antiviral therapy after which the HBsAg elimination occurred.

Patients qualified for treatment were those chronically infected with HBV who had a minimum infection duration of six months (usually much longer). Patients eligible for treatment had HBeAg (+) minimum viral load of 20,000 IU/mL and anti-HBe (+) minimum viral load of 2,000 IU/mL. Liver biopsy or FibroScan was performed on treated patients to assess liver fibrosis. Based on the results, 90% of the patients showed slight fibrosis from 1 to 3 on a METAVIR or Scheuer scale. None of the patients had significantly elevated ALT levels (Table 1).

Before treatment, the patients were assessed for HBV viremia, HBsAg presence, HBeAg, ALT activity, AFP concentration, and the level of liver fibrosis. In all patients, the following was assessed every six months: HBV-DNA concentration, AFP, and the presence of HBsAg and HBeAg among patients with this antigen. In the case of HBeAg or HBsAg loss, the detectionof anti-HBe or anti-HBs was determined every three months.

Statistical analysis was performed using the chi-square test (χ2) and the Mann-Whitney U-test. The statistical significance level was set at P < 0.05.

All patients gave their constant to participate in the study and receive therapy. All patients (from all Research Centers) were qualified for the treatment and treated according to the recommendations of the National Health Fund (therapeutic program B18.1). All patients signed informed constant forms to use their laboratory results in scientific research.

Among all HBeAg (+) patients, an initial antiviral PEG-IFN therapy was commenced in 46 (29%) individuals, whereas it was the case of 396 (35%) patients in the group without HBeAg. In both groups, the treatment continued for 12 months. There was no influence of PEG-IFN on the HBsAg elimination right after the treatment and in the subsequent years.

aPatients with liver cirrhosis; No. (%).

Of 39 patients with HBsAg elimination, 16 were treated with only one antiviral drug, 22 were treated initially with LMV and then with ETV or TDF, and one patient was initially on PEG-IFN and then on TDF. In this patient group, the most popular drug was ETV or TDF. Although HBsAg elimination occurred more often after ETV treatment, the difference concerning patients treated with TDF was not statistically significant (Table 2).

In 38% (3/8) of HBeAg (+) patients and 42% (13/31) of HBeAg (-) patients, there occurred conversion into anti-HBs within three months after HBsAg elimination at the earliest. No statistically significant difference was confirmed in the frequency of these antibodies depending on the HBeAg status (Table 2).

In patients treated with ETV, HBsAg was significantly more often eliminated in HBeAg (+) patients (Table 2). In five out of 39 (13%) patients in whom HBsAg was eliminated during the observation period, a liver transplant was performed due to liver failure secondary to liver cirrhosis (Table 2).

The efficacy of various antiviral therapies varies among CHB patients, indicating that both viral and host factors can affect the results. Stelma et al. (2) treated 98 patients with CHB for 48 weeks with PEG-IFN and ADV. Five years after the treatment came to an end, the HBsAg elimination was confirmed in 19% of the patients with HBeAg and 16% of the patients without this antigen (2). Already in this study, similar to the authors’ study, a more frequent HBsAg elimination was observed in HBeAg (+) patients.

Aziz et al. (3) assessed 110 patients with CHB that were treated with TDF for 48 months and did not confirm the HBsAg elimination in a single one of them. On the other hand, Alawad et al. (4) observed HBsAg clearance within a five-year treatment period or five years after the treatment stopped in 34% of patients treated with PEG-IFN and 37% of patients treated with NAs. The observation indicated high NA efficacy. Usually, the therapy efficacy is worse with the use of these drugs than with PEG-IFN.

A question about predictive factors for HBsAg elimination is more and more often raised, especially in the case of NAs treatment. In the authors’ study, patients with viremia ≤ 2,000 IU/mL were not qualified for treatment due to the criteria specified in domestic guidelines and drug program (9). In the authors’ study, patients treated with PEG-IFN usually had high viremia, which could explain the lack of efficacy of PEG-IFN therapy.

The mechanism of NAs antiviral effect is associated with their suppressive activity towards the synthesis of the virus’s DNA. However, in vitro studies have shown that ETV inhibits the priming of DNA-HBV polymerase, which presents an additional mechanism for the antiviral effects of this drug (10). Perhaps it is significant concerning a slightly more frequent HBsAg elimination during the ETV therapy observed in the authors’ study. A significantly more frequent HBsAg elimination in HBeAg (+) patients than in HBeAg (-) patients treated with ETV is interesting.