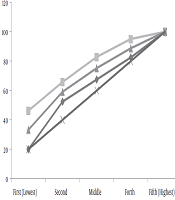 To assess socioeconomic inequality in colorectal cancer stage at diagnosis time in Qazvin city, Iran during 2014 - 2016.

A cross-sectional study was conducted on 200 patients who were diagnosed with colorectal cancer (CRC) at the Vellayat hospital of the Qazvin city. The Principal Component Analysis (PCA) approach was used to combine household assets as a proxy of SES. Cancer staging information was extracted from the patient's medical records and then a pathology specialist performed cancer staging. Descriptive statistics and a multiple logistic regression model were used to illustrate an association between CRC late diagnosis and socioeconomic status adjusted for age, sex, and residence of the area. We applied the standardized Concentration Index as a measure of socioeconomic inequality in CRC late diagnosis.

According to this survey, CRC tends to be diagnosed at more advanced stages among low socioeconomic status groups, and the observed discrimination is more severe in Iranian women.

In the past decades, cancer has turned to one of the most important causes of death worldwide (1). During this time, several national and international cancer control initiatives have been launched to combat cancer and its consequences as a global public health challenge. All these efforts have been mostly based on primary prevention, early detection, and palliative care (2). Although primary prevention through eliminating cariogenic exposure at the population level could reduce cancer incidence by 40% to 45%, it is still an unachievable goal, particularly for developing countries (3). Therefore, low and middle-income countries should pay more attention to early detection of cancer as the second primary approach of cancer prevention to increase the efficiency of their cancer control programs (2, 4, 5).

It has been firmly confirmed that full and equal access to cancer screening facilities, along with public awareness about cancer symptoms, lead to an increase in cancer survival through reducing the incidence of advanced cases of cancer (6, 7). Reducing the time between early symptoms of cancer and cancer diagnosis provides less complicated therapeutic options and makes them more effective as well (4, 5). However, it cannot be achieved unless the majority of patients with cancer are diagnosed through regular screening programs before the appearance of early symptoms (6). In this regard, diagnostic facilities should be equally distributed over gender, race, and socioeconomic groups and each member of communities should have the same and equal access to these services.

Measuring inequality in health outcomes is crucial for policymakers in order to find the gaps and take necessary actions to address them. Socioeconomic inequality is wildly considered as an unfair and unacceptable type of health inequality, which has been previously investigated regarding cancer stage at diagnosis time and cancer-related mortality and morbidity (8-12). The growing body of evidence supports the impact of socioeconomic status (SES) on cancer survival. These improvements might be due to early diagnosis of cancer among people with high SES who are more likely to participate in screening programs, and the probability of being diagnosed is markedly earlier among them compared to the low SES people (8-10). Despite growing evidence on inequality over the past decades (8, 9), there is little evidence on the volume and direction of socioeconomic inequality regarding the early diagnosis of cancer in Iran.

The aim of the current study was to investigate whether SES affects the early diagnosis of colorectal cancer (CRC) among Iranian using a sample population from Qazvin city. Addressing inequality between low and high SES people in early detection of CRC can help the screening programs to stay focused on people who are at risk of more advanced stages of the disease.

The hospital-based cross-sectional study was conducted in 2016 to assess SES inequality in early diagnosis of CRC in Qazvin city, Iran. The target population was all of the patients with CRC (245 patients) who were diagnosed at the Vellayat hospital in Qazvin city during 2014 to 2016. Data gathering was carried out through telephone interviews. We retrieved contact information of patients from their medical records and called them three times. Trained interviewers performed all interviews. At the beginning of the study, informed consent was completed for each participant. CRC stage at diagnosis time was the intended outcome of the current study. We recruited Surveillance, Epidemiology, and End Results Program (SEER) summary stage system, which classifies cancers into four stages based on their anatomic extension (in situ, local, regional, and distant). All of the cancer stages were classified by a pathology specialist (10). Then, the first two stages were defined as "early diagnosis" and the last two stages as "late diagnosis"(10). Our logic to classify stages into late or early was supported by shreds of evidence that patients with in situ and local stages are more probably to be asymptomatic in comparison to regional or distant stages of CRC (11, 12), and also it has been the most prevalent method of staging in previous studies (10, 12).

The ethics committee of Tehran University of Medical Sciences approved the study.

In the current study, we used the asset approach as a surrogate of the socioeconomic status variable of the study participants. A questionnaire with 12 items including having a personal car, satellite receiver, refrigerator, dishwasher, laundromat, microwave, Personal Computer (PC) or laptop, vacuum cleaner, LED television (TV), access to the Internet at home, carpet, and the oven were accomplished for each study participant, and they also were asked about possession or non-possession of the household assets at CRC diagnosis time, education level, family size, house size, and residence of the area at diagnosis time of cancer. This questionnaire has already been used and validated by Sartipi et al. (13). We did not collect income as the indicator of socioeconomic status due to significant underreporting. Besides, job information was not used for several reasons. First, no valid reference was available to classify job groups and make them superior to each other. Secondly, the variation of the reported jobs was too high, and also the number of missing data was pretty high in this regard. Finally, the job is related to income level, and for this reason, the level of underreporting is high regarding job information.

Beside, for positive values, CC will lie below diagonal, and it means the health outcome is focused among high-SES groups. In this scale, when the estimated concentration index is 0, there is no inequality on desired health outcomes, and CC precisely falls on the equality line (15, 16). All statistical analyses were done by using Stata software ver 14.1 (Stat Crop, Colleague Station, TX, USA), and the level of statistical significance was considered at 0.05.

This study was conducted on all patients with colorectal cancer who were diagnosed during 2014 to 2016 at the Vellayat hospital in Qazvin city. After excluding unknown stage cases and those cases that we were not able to contact them (45 cases), 200 patients remained in the analysis. Overall, 56.5% of participants were men, and 79% of the study population was urban dwellers. The total mean age and Standard Deviation (±SD) of the study population were 59.5 (±14.1) (Table 1).

Table 2. Standardized Concentration Index and Its Associated Confidence Intervals Based on Gender

Concentration curve for late CRC diagnosis based on gender

The current study was launched to assess socioeconomic inequality in the CRC stage at diagnosis time in Qazvin province. The overall prevalence of late-stage diagnosis of CRC was estimated at 40.5% in the Qazvin population. We also addressed that late-stage diagnosis of CRC was associated with SES, and it was more likely to be diagnosed in more advanced stages among low SES. We also found that CRC late diagnosis distribution across SES groups was not equal, and it was considerably concentrated among low SES, which was slightly severe among women than men.

Comparing to our findings, studies from developed countries have reported a higher prevalence of late CRC diagnosis. In two studies from the United States, the prevalence of late diagnosis of CRC was reported 57.5 and 54.9 (10, 12, 17). These studies have been mostly carried out on population-based cancer registries data, while we used data from referral patients who were admitted at hospitals. A different source of information could be considered as the most important reason to justify the differences in the prevalence of CRC late diagnosis.

Socioeconomic inequality in CRC late diagnosis has not been studied in Iran; however, in the only published study by Yavari et al. prevalence of late diagnosis of breast cancer was reported 27% and the gap between low and high SES was considerably fewer than reported values for CRC in the current study (18). The observed difference could be due to a higher level of awareness about cancer in Iranian women as well as a more developed mass screening program for breast cancer (19, 20).

According to the multiple logistic regression model, low SES people had a higher chance of being diagnosed at more advanced stages of CRC, which was in line with other studies (10, 21). Several studies have reported that high SES people have better access to health information, which can lead to a higher level of awareness (22-25). Moreover, in comparison to the deprived people, they have better access to cancer diagnostic facilities (22-24). Consequently, they are more likely to take part in regular screening programs, which increase the probability of CRC diagnosis at lower stages.

General poor cancer awareness has been reported in Iranian adults previously (23-25). In such circumstances, a high prevalence of late diagnosis of colorectal cancer amplifies the need to improve access to CRC diagnostic facilities as well as enhancing the level of awareness about cancer, particularly among socioeconomically deprived people. The successful experience of Qatar in enhancing general awareness about CRC screening and investment in its facilities indicated that colorectal cancer could be detected earlier and yield positive results in high prevalence regions (26).

We found unequal distribution in late diagnosis of CRC across socioeconomic quintiles, and a negative estimated concentration index for late CRC diagnosis implied that the outcome was concentrated among low SES people. Socioeconomic inequality in the distribution of a couple of health measures such as non-communicable disease risk factors, visual impairment, and eye care utilization have been well-documented in Iran, that are consistent with the findings of the current study (27). We also observed a slight severe socioeconomic inequality in early diagnosis of CRC by gender. Low SES women are less likely to participate in an aggressive screening procedure like colonoscopy compare to the low SES men (28), which can be due to either more severe financial problems or lack of education and some specific cultural beliefs.

The retrospective approach to get socioeconomic information was the main limitation of the present study, and we tried to reduce the problem of recall bias through recruiting recently diagnosed patients. Besides, the number of cases with unspecified stage was the other limitation of this study that reduced the generalizability of the findings. On the other hand, the study had several advantages, including applying a valid asset questionnaire beside robust statistical analysis to investigate socioeconomic inequality in the late diagnosis of CRC.

In summary, we estimated socioeconomic inequality of early diagnosis of CRC and showed that CRC is diagnosed at earlier stages among high SES people, and there is a disparity in stage at diagnosis time of colorectal cancer. Investment in CRC screening facilities with particular attention on more deprived people in order to generalize access to CRC screening programs for different SES groups of community is the most critical suggestion to reduce observed inequality. Also, enhancing total CRC awareness among the study population could be considered as a complementary approach to use the benefits of this neglected capacity to decrease the overall percentage of late CRC diagnosis.

The current study was performed as a part of the first author MSc thesis using data from the Vellayat hospital in Qazvin city. We would like to thank all staff of the Vellayat hospital who helped us in data gathering. We also thank Dr. Kazem Zendehdel and Dr. Mina Nejati for their helpful suggestions.