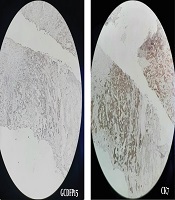 Colon cancer is the third most common cancer in gastrointestinal (GI) malignancies. Colorectal cancer most commonly metastasizes to the liver and lung. Metastasis to the breast from extramammary tumors are uncommon and metastatic colon carcinoma (MCC) to the breast is extremely rare.

We reported a 43-year-old woman with breast metastasis with colon origin. The patient presented with breast mass with mucinous adenocarcinoma.

Metastasis to the breast from the colonic origin is possible. However, its occurrence is rare when mucinous adenocarcinoma of the breast mass is reported, and GI origin must be considered.

Colon cancer is the third most common cancer in gastrointestinal (GI) malignancies. Colon cancer primarily metastasizes to the liver and lung and, on very rare occasions, spreads to the breast, which is usually associated with poor prognosis and clinical outcomes (1-3).

Breast metastasis from extramammary tumors is rare with an incidence of 0.3% to 5%, and metastatic colon carcinoma (MCC) is even rarer (4).

In patients with advanced colon cancer, surgery alone is not curative and other forms of therapies may be required to extend the patients’ life expectancy. Human epidermal growth factor receptor (HER2) overexpression has been reported in some cases and this could be a guideline to new adjuvant therapy for these patients (5).

Invasive micropapillary carcinoma is associated with frequent lymph node metastases and adverse clinical outcomes. It has been reported in the breast, urinary bladder, lung, and the parotid gland, but rarely in the colon (6).

A 43-year-old woman admitted to medical service with the chief complaint of large right breast mass and multiple axillary lymphadenopathies. Her right breast skin was edematous. Core needle biopsy of breast mass and axillary lymph nodes revealed invasive mucinous ductal adenocarcinoma (Figure 1). Since the tumor was locally advanced, thoracic and abdominal computed tomography (CT) scan and bone scan were offered, resulting to detect a few lung metastases, hepatic metastasis, as well as one large mass in the ascending colon. Informed consent was obtained from the patient and her family for using her medical data without mentioning her personal information. 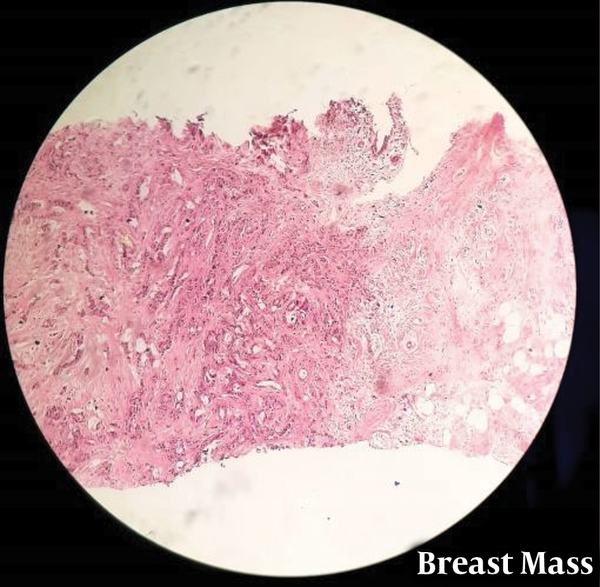 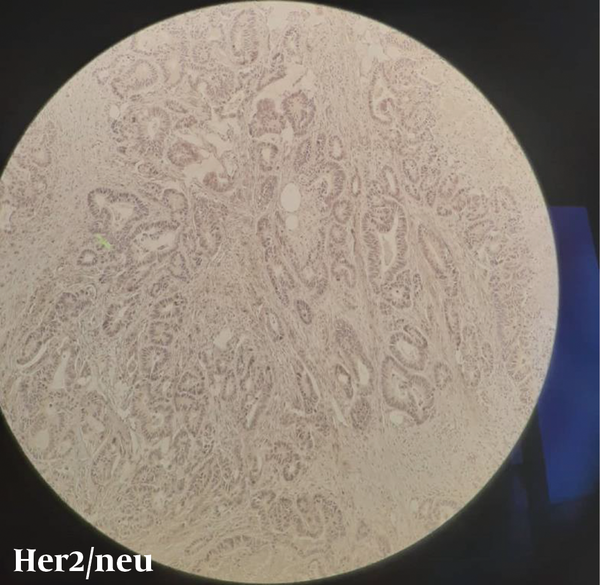 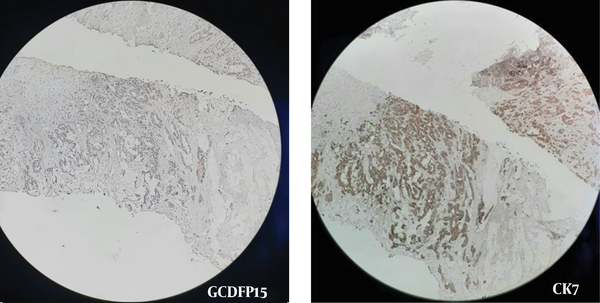 According to the histopathology result, the origin of metastases was supposed to be the gastrointestinal tract; therefore, the patient underwent colonoscopy. The result was near to obstruction mucinous adenocarcinoma of the colon in the hepatic flexure of the colon (Figures 6 and 7). The patient had signs and symptoms of partial obstruction such as postprandial abdominal pain and distension, about which she had not talked before. Our GI man recommended a surgical approach due to impending obstruction. 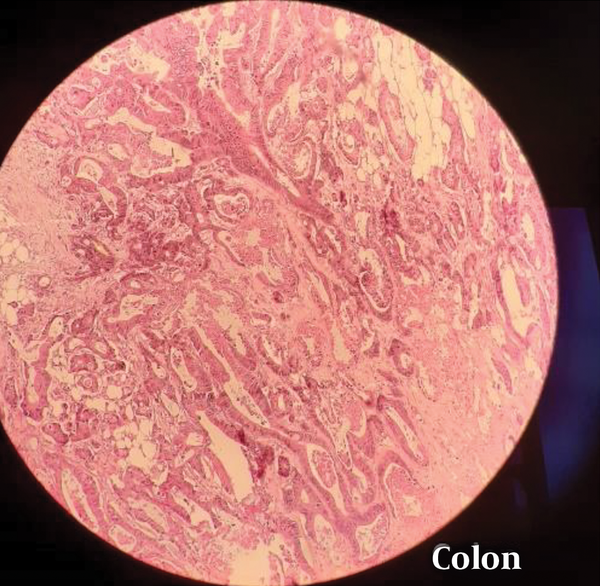 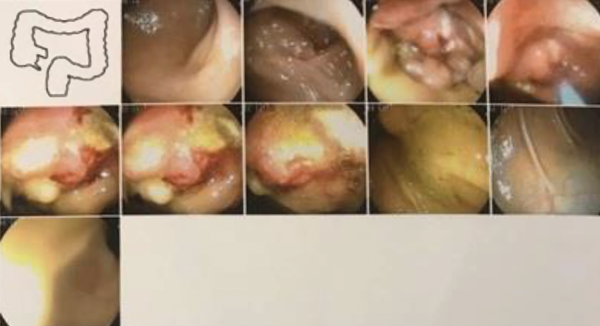 The patient colonoscopy that shows near to obstruction in the ascending colon because of hepatic flexure mass.

The patient underwent laparoscopic right hemicolectomy and we did not detect gross metastases in the liver while performing laparoscopy.

The treatment strategy for metastatic cases was offered to the patient based on a proper assessment by a multi-disciplinary team (MDT), including chemotherapy followed by a periodic radio-oncologist visit, blood test, and CT scan after finishing chemotherapy.

Given the origin of the masses was colonic, the patient underwent chemotherapy; FOLFOX + Avastin for 8 - 10 cycles, FOLIRI for 10 - 12 cycles added with Avastin for 3 - 4 cycles, and regorafenib for 3 - 4 cycles. In the follow-up, the breast tumor, axillary lymph nodes, and hepatic mass shrinkage were detected. However, none of them respond to chemotherapy. During the follow-up, pleural effusion was detected and a catheter inserted to drain it. The patient passed away 2 years after starting chemotherapy.

Primary breast cancer is one of the most common malignancies. However, metastases to the breast from extramammary malignancies are rare (7).

Generally, metastases to the breast from extramammary malignancies are characterized by rapidly-growing mobile masses that are easily palpable but do not cause overlying skin or nipple retraction, or bloody nipple discharge (8).

Metastasis to the breast from the colonic origin is possible and it may rarely occur. However, when mucinous adenocarcinoma of the breast mass is reported, GI origin must be considered. Therefore, GI symptoms should be mentioned in the medical history, and GI evaluation such as endoscopic, imaging, and IHC in biopsy samples should be offered to the patient.

In such cases, the radical operation should be avoided unless for palliation purposes. Considering the primary origin, breast operation is not a certain treatment. Primary or partial mastectomy with chemotherapy is adequate therapy and offers the patient an aesthetic and oncologically safe surgical procedure (2).

In conclusion, the treatment strategy for metastatic breast disease should be decided based on a proper assessment of the case by the MDT of surgeons, radiologists, pathologists, and radio-oncologist (4) that depends on the symptoms, primary origin, and staging.