The use of oncolytic viruses as therapeutic agents is a promising treatment for various human cancers. Several viruses have been extensively examined to achieve tumor cell death.

The cytolytic activity of the virus was evaluated using an MTT assay. Apoptosis was detected by Annexin-V/propidium iodide (PI) staining and analyzed via flow cytometry. To indicate viral replication in vivo, nude mice with HeLa heterografts were treated with the Hoshino strain of mumps virus.

Currently, human cancers are the leading cause of disease-related mortality and continue to be major health problems. Although current therapeutic strategies in oncology, including the use of chemical anti-cancer drugs, radiation, surgical methods, or combinations of these modalities, are valuable tools for the treatment of some human tumors, other approaches appear to be ineffective. In recent years, many efforts have been made to find novel methods for the treatment of different human tumors. Viral therapy with oncolytic viruses (OVs) is one of the most important areas of cancer therapy. Evidence shows that various viruses, such as some members of the Paramyxoviridae family exhibit oncolytic activity (1-4).

The wild-type Urabe strain of mumps virus (MuV) was reported to exhibit significant oncolytic activities against different human cancers in the mid-1970’s (5). The MuV belongs to the order Mononegavirales, the family Paramyxoviridae, the subfamily Rubulavirinae, and the genus Orthorubulavirus. Mumps, as one of several childhood infectious diseases, is a vaccine-preventable disease. However, the extensive use of attenuated vaccine strains has reduced the prevalence of this disease around the world (6). Although MuV has long been used as an anti-tumor agent in preclinical (7) and uncontrolled clinical trials (8-10). Limited studies have been recently conducted in this area. More recently, however, some natural and chimeric MuV strains have been studied as potential anti-cancer agents (11-16).

The attenuated Hoshino vaccine strain is one of the several commercial mumps vaccine strains, which is derived from a genotype-B wild-type MuV isolate and used as a vaccine in Japan, Korea, and Iran. This temperature-sensitive vaccine strain was developed by culturing on specific pathogen-free (SPF) chicken embryo cells at 32ºC, using the plaque cloning technique (17). Experimental studies on infections in monkeys, as well as clinical trials (18), have shown that this vaccine strain is both safe and effective. It is also extensively used in Iran.

To the best of our knowledge, no study has been yet published on the oncolytic activity of the Hoshino vaccine strain of MuV. Therefore, this study aimed at elucidating the natural oncolytic activity of this commercially available vaccine strain against two human cancer cell lines, that is, HT1080 fibrosarcoma and HeLa cervical adenocarcinoma cell lines.

The plates were incubated for four hours at 37ºC in a 5% CO2 atmosphere in the air. The supernatants were then removed and 100 µL of dimethyl sulfoxide (DMSO; BDH Chemicals Ltd., Poole, England) was added to each well. Cell viability was measured at 570 and 630 nm, using an enzyme-linked immunosorbent assay (ELISA) plate reader (Dynex MRX II, Chantilly, VA, USA). Virus infection was induced in triplicate. The results of cell viability are presented as the survival percentage of infected cells versus uninfected control cells, which were considered to have 100% viability. Data are presented as mean ± standard deviation (SD) of three measurements.

In this preliminary experimental study, six-week-old male athymic B6 nude mice were obtained from Pasteur Institute of Iran (North Research Center). The mice were kept in separate ventilated cages and fed autoclaved standard laboratory chow and tap water ad libitum. The experiments and procedures were approved by the Ethics Committee of Razi Institute (approval number: RVSRI.REC.98.001). The HeLa cells (106), resuspended in 100 µL of phosphate-buffered saline (PBS), were subcutaneously implanted in the right flanks of mice, using an insulin syringe. Afterward, the animals were placed back into their cages and examined twice a week for tumor growth. The length and width of the tumors were measured with a Vernier caliper. The tumor volume (mm3) was calculated as follows (19):

When the tumors reached a diameter of 5 - 10 mm, the heterograft mice were divided into two groups as follows: (i) intratumoral administration of MuV Hoshino strain; and (ii) intratumoral administration of clarified cell lysates (mock). The treatment group received four doses of the virus at 2.5 × 105 CCID50/dose twice a week for two weeks (total dose= 1 × 106 CCID50). The mice were euthanized as soon as they lost more than 20% of body weight, or neurological deficits emerged, or the tumor diameter exceeded 2.5 cm.

Both in vitro and in vivo data are presented as mean ± standard deviation (SD). Datasets were compared by independent t-test in SPSS version 15. Statistical significance was set at P < 0.05.

To determine the impact of viral dose (MOI) on viral cytotoxicity, MTT assays were performed on the HeLa, HT1080, and MRC-5 cell lines at different viral MOIs (Figure 1). Based on the results, the two cancer cell lines (HeLa and HT1080) showed almost the same sensitivity to this vaccine strain. Human fibrosarcoma and cervical cells were more sensitive to the MuV Hoshino strain, even at MOI of 0.02, compared to normal human diploid cells (MRC-5). Also, the overall mean effect of the virus at MOI of 2 was significant against non-cancerous cells (P < 0.00001).

The effect of MuV Hoshino strain on the induction of apoptosis was assessed, using Annexin-V/PI staining. The flow cytometry results revealed that apoptosis occurred when cancer cells were treated with the MuV Hoshino strain (Figure 2). The left bottom quadrant of the cytograms indicates the total number of viable cells, while the left top quadrant represents non-viable (necrotic) cells with PI uptake. Also, the right quadrants represent the number of apoptotic cells. The apoptotic cell count was significantly higher in HeLa and HT1080 cells, infected with the MuV Hoshino strain (P < 0.05). 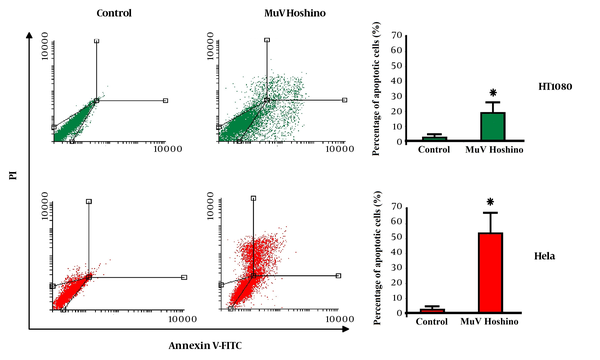 Apoptosis induction by the MuV Hoshino strain on HT1080 and HeLa cells (one of the three experiments is shown here). Bar graphs illustrate the percentage of apoptotic cells in the three experiments. Data are presented as mean ± SD. Asterisks indicate statistical significance versus the control (P < 0.05).

The HeLa cells were injected into the subcutaneous flank of male nude mice to determine the in vivo replication and oncolytic activity of Hoshino strain. For this purpose, MuV was administrated following tumor formation. Tumor nodules became visible within the first 10 days after implantation in 100% of inoculated mice. The groups of heterograft mice showed similar tumor volumes before treatment (P = 0.1290). All animals exhibited tumor growth for 30 days after receiving the first dose. On average, the MuV-treated animals showed a slower rate of tumor growth, compared to the control animals (Figure 3). The pairwise comparison of tumor volume revealed a significant delay in the tumor growth of the attenuated MuV-treated group, compared to the control group (P = 0.01769). This finding indicated that the attenuated MuV Hoshino strain exhibited effective oncolytic activity in vivo. 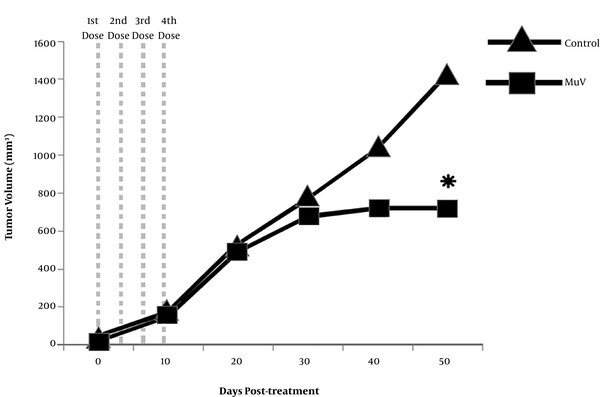 The most important advantage of using attenuated vaccine strains, such as Hoshino strain, in oncolytic therapy is that it is both well-characterized and safe (commercially licensed for application). In the current study, an accepted and standard MTT assay was performed to evaluate the effects of MuV Hoshino strain on the viability of cells. Based on the Figure 1, the MuV Hoshino strain, even at very low MOIs, exhibited significant oncolytic activity against fibrosarcoma and cervical cancer cell lines. However, at an MOI of 2, the results were significantly different from non-cancerous cells (P < 0.00001). This suggests that the MuV Hoshino vaccine strain has greater oncolytic activities against fibrosarcoma and cervical cancer cell lines, compared to non-cancerous fibroblast-like MRC-5 cells. In other words, the results revealed the selectivity of MuV Hoshino strain for the lysis of these cancer cells.

Annexin-V/PI staining is one of the most widely used techniques for evaluating apoptosis quantitatively (23). This assay was used in the present study to analyze the effect of MuV Hoshino strain on apoptosis induction in the infected cells. The results revealed that the apoptotic and necrotic cell population significantly increased in both treated cancerous cells. Similar results have been observed regarding other MuV strains (14-16, 24). According to previous studies, MuV induces cellular apoptosis by upregulation of interleukin-1 beta (IL-1β) (24), or Fas/Fas ligand (FasL), or both (16).

Although previous studies have indicated that MuV SH and V proteins can have anti-apoptotic functions (25-28), apoptosis may be the predominant mechanism in the oncolytic activity of the MuV Hoshino strain, possibly due to the altered expression of some apoptotic receptors (29, 30), besides changes in apoptotic signaling pathways in these cancer cells. Moreover, HeLa is one of the cancer cell lines, which contains wild-type Kirsten rat sarcoma viral oncogene homolog K-RAS (31). A previous study showed that K-RAS mutations resulted in resistance to apoptosis (32). Therefore, the higher level of apoptosis in the HeLa cell line may be related to the increased apoptosis by K-RAS expression in response to viral replication.

Moreover, the treatment of heterograft mice with the MuV Hoshino strain at typical doses for vaccination revealed significant oncolytic activities following intratumoral therapy. The MuV virotherapy is a suitable candidate for cervical and fibrosarcoma cancers, because the tumors are solid. This method allows for direct intratumoral injection into the tumor site and minimizes virus inactivation by specific anti-virus neutralizing antibodies in the circulation system (33). Also, direct injection into solid tumors increases its spread in cancerous cells and decreases normal tissue damage (34). One of the possible accelerators of cell sensitivity to MuV is viral attachment (with high affinity) due to the high expression of MuV receptors (sialic acid residues) on the cell membrane.

Although the oncolytic activity of the MuV Hoshino strain needs to be confirmed in future preclinical studies, the primary findings of this study indicated that this commercially available attenuated MuV vaccine strain might be potentially used as an oncolytic therapeutic agent to treat fibrosarcoma and cervical cancers. Further research is necessary to explain the potential oncolytic activity of this strain against other cancer cell lines.

This study was financially supported by the grant No. 12-18-18-054-95018-950516 from the Iran Agricultural Research, Education and Extension Organization (AREEO). The authors thank Dr. Zohreh-Azita SadighRazi Vaccine and Serum Research institute for her comments in preparing this manuscript. We also thank A. Foroughi Razi Vaccine and Serum Research institute for his technical assistance.