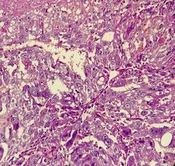 An Unusual Presentation of Choriocarcinoma: A Case Report with a Long Latent Period

Choriocarcinoma (CC) is a rare malignant tumor of trophoblastic tissue. This tends to invade rapidly to the vasculature and metastasis to the lung, vagina, brain, and liver. CC can present with a variety of manifestations, such as hemoptysis, gastrointestinal (GI) bleeding, and abnormal uterine bleeding. Commonly, the latent period to the development of CC is not more than 1 year after the antecedent molar or normal pregnancy. In this report, the patient developed CC about 32 months after her previous known pregnancy. We reported a rare case of gestational CC that occurred about 32 months after her antecedent pregnancy.

A 21-year-old admitted in shock with abnormal uterine bleeding, pain, and lower abdominal pain. The patient had one previous cesarean section 32 months prior to admission. The vaginal examination demonstrated a fused solid cervical mass with an irregular border measuring about 7 × 7 cm. In further workup, there was evidence of a 103 × 94 × 89 mm mass with the hemorrhagic area and central necrosis in the middle and lower segments of the uterus and cervix. The patient underwent a total abdominal hysterectomy and left side salpingo-oophorectomy. The diagnosis of CC was made after microscopic examination.

There are few case reports of choriocarcinoma with more than a year latent period after antecedent pregnancy. The strongest hypothesis is having asymptomatic pregnancy during the period between the last pregnancy and the development of CC. However, the possibility of non-gestational choriocarcinoma in such cases should be considered. Treatment with a single- or multiple-agent chemotherapy regimen should be immediately initiated after diagnosis in these cases.

Choriocarcinoma (CC) is the most invasive type of gestational trophoblastic disease arising from anaplastic trophoblastic tissue (1).This tumor is composed of cytotrophoblast and syncytiotrophoblast cells and mostly has a gestational origin (2). The non-gestational form of CC believed to arise from the gonads and pluripotent germ cells (2). Gestational CC is a rare complication of prior molar and rarely non-molar gestation which usually occurs within one year of the antecedent pregnancy (3, 4). These tumors develop in approximately 0.6 of every 10000 normal gestations, 0.7 of every 10000 abortions, and in 250 of every molar pregnancy (5).

The main risk factors for the development of gestational CC are Asian ancestry, prior complete hydatiform mole, advanced maternal age (> 40 years), long-term oral contraceptive use, and blood type A (6). The CC tends to invade the vasculature and metastasis to the lung, vagina, brain, and liver, so it could present with various organ symptoms such as hemoptysis or GI bleeding (7, 8). The other common symptoms of CC are abnormal uterine bleeding, gynecomastia (in males), or hyperthyroidism due to elevation of beta-human chorionic gonadotropin (B-hCG) level in these cases (1, 8).

In this article, we reported a rare case of gestational choriocarcinoma with lung metastasis the occurred about 32 months after her antecedent pregnancy.

A 21-year old female (gravida 1, abortion 0, Live 1) admitted to Hazrat Zeinab hospital, Iran in shock due to abnormal uterine bleeding since 15 days before admission. Hazrat Zeinab hospital is one of the major referral centers for obstetrics and gynecology in south Iran, affiliated to Shiraz University of Medical Sciences. The bleeding pattern was initially spotted but was exacerbated. She also suffered from back pain and lower abdominal pain. The vital sign was pulse rate 120, temperature 36.9, respiratory rate 19, and the blood pressure was 90/60 with orthostatic changes.

The patient had 1 previous caesarian section 32 months before admission. She had no other past medical history and denied cigarette, tobacco, and alcohol consumption. She had no history of oral contraceptive usage or any drug.

In physical examination, there was a severe tenderness in the left lower quadrant of the abdomen. The vaginal exam showed a fused solid cervical mass with an irregular border measuring about 7 × 7 cm.

Transvaginal sonography performed which demonstrated a 99 × 78 mm heterogeneous structure in the body of uterus and cervix with multiple small internal cyst suggestive of mole with invasion to the underlying myometrium and prominent vascularity highly suggestive of arteriovenous malformations (AVM). There was also evidence of pressure effect on the posterior wall of the bladder.

Pelvic magnetic resonance imaging (MRI) showed a malignant lesion measuring about 103 × 94 × 89mm with the hemorrhagic area and central necrosis in middle and lower segments of uterus and cervix with extension to the entire thickness of myometrium. The mass had pressure effect on posterior wall of bladder with possibility of invasive mole.

She became hemodynamically stable after fluid resuscitation and red blood cells units transfusion at admission and she was prepared for operation.

The patient underwent total abdominal hysterectomy surgery and unilateral salpingo-oophorectomy (left side). The mass was malodor and sesamoid with invasion to the cervix (Figure 1A) which was sent to pathology for diagnosis. Gross examination of the lesion showed a hemorrhagic and necrotic mass measuring 6 × 5 × 5 cm in the lower uterine segment with extension to the cervix. On microscopic examination, the tumor consisted of sheets of cytotrophoblast, intermediate trophoblasts, and syncytiotrophoblasts with enlarged atypical nuclei and numerous mitotic figures. No placental villi were found and choriocarcinoma was diagnosed (Figure 1B )

A: About a 9 × 8 cm lesion with invasion to the uterus wall and cervix. B: The tumor shows a mixture of cytotrophoblasts, intermediate trophoblasts, and syncytiotrophoblast with atypical nuclei and prominent nucleoli invading the myometrium, H&E, X400.

The patient discharged 2 days after the operation in a stable condition with ceftriaxone, metronidazole, clexan, hematinic, and diclofenac.

The choriocarcinoma diagnostic (CD) score of the patient was estimated to be more than 7. The stage of cancer was assigned according to the International Federation of Gynecology and Obstetrics (FIGO) classification that was stage III. After surgery, multiple-agent chemotherapy with EMACO regimen (a combination of methotrexate, dactinomycin, cyclophosphamide, and vincristine) started for her and the patient received 8 sessions of chemotherapy. In a weekly check of serum B-hCG titer, the titer decreased to 115 mLU/m, 120 mLU/m, 80 mLU/m, and 28 mLU/m in the first, second, third, and fourth weeks of follow up, respectively and increased after the sixth courses of chemotherapy and remained in the plateau level of 165mLU/m. Her urine B-hCG became positive. A metastatic workup was performed for her again. In chest CT, there were still multiple metastatic nodules but became smaller in size in comparison to the previous CT scan. Abdominal-pelvic MRI revealed no abnormality except about 40mm simple cyst in the right ovary. So, we changed the chemotherapy regimen to the EMAEP regimen (etoposide, methotrexate, actinomycin-D, etoposide, and cisplatin).

The patient was under weekly follow-up of Mole clinic with a weekly check of serum B-hCG titer. The patient received one course of the EMAEP regimen which due to the prevalence of COVID-19 did not follow the next course of chemotherapy until 2 months later. After 2 months of latency, she presented with slurred speech, left lower extremity hemiparesis, and the B-hCG level was raised to 90000 mLU / m. The brain CT scan and brain MRI performed which detected multiple brain metastases. According to neurology, radiotherapy, and neurosurgery teamwork, we decided to continue the EMAEP regimen with a dose of 1000 mg/m2 methotrexate for 1 session. Four days after completing the chemotherapy course she experienced nausea, vomiting, and headache. A brain CT scan was performed again that revealed no significant new changes. According to the radiotherapist consultation the patients received 2 session brain radiotherapy. Two days after the second session of radiotherapy, she faced a decreased level of consciousness and inability to walking and due to hemorrhage in the posterior fossa lesion of the brain, emergency resection of lesion was performed by a neurosurgeon. The patient discharged in good condition 1 week later and was ready to receive another radiotherapy session.

Written informed consent was obtained from the patient for publication of this case report and any accompanying images.

Choriocarcinoma is a rare trophoblastic tumor and may occur subsequent to a molar pregnancy, an abortion, normal gestation, or an ectopic pregnancy (1, 2). The incidence of CC has been measured in about 1 of 5333 tubal pregnancies and 1 of 1.6 million normal intrauterine pregnancies (9).

The clinical manifestations of the patients with CC differ depending on the site of metastasis. Patients may be present with cardiopulmonary complaints (20.66%), gastrointestinal bleeding (18.43%), or central nervous system symptoms (17.67%) in the lung, GI, or brain metastasis (1).

Choriocarcinoma can develop anytime between 5 weeks to 15 years from antecedent pregnancy or even after menopause (10, 11). Usually, the latent period to the development of CC is not more than 1 year after the antecedent molar or normal pregnancy (1). In this report, the patient developed CC about 32 months after her previous known pregnancy.

The earliest reported onset of choriocarcinoma was 2 weeks after a term pregnancy in a 28-year old female after a full-term normal pregnancy which was presented with severe vaginal bleeding 10 days after delivery and elevated HCG titer (12). Some other studies that reported the early onset metastatic CC to be within 3 weeks, 11 weeks, and 6 months after delivery (13-15).

Few cases of CC have been reported after a long latent period from antecedent pregnancy (16, 17).

O’neill et al. previously reported a 57-year old female with uterine gestational choriocarcinoma with a latent period of about 22 years after her last known pregnancy. The DNA polymorphism studies in that patient confirmed the gestational origin of the CC (17).

Gestational CC with such a long latent period is rare, although some cases were previously described (18-23). Ito et al. in an evaluation of 106 patients with gestational choriocarcinoma found that only about 7.5% of them had a latent period of more than 2 years from their previous known pregnancy (24).

This study suggested that a long latent period in gestational CC from the last known pregnancy can be explained by an asymptomatic pregnancy in these patients.

In 1997, Okamoto et al. reported another case of choriocarcinoma in a 53-year old female that occurred 23 years after an elective abortion. The patient presented with spontaneous uterine rupture due to choriocarcinoma (18). That study suggested that the remained trophoblastic tissue after pregnancy could stay dormant for years and then proceed with malignant transformation (18).

Sonobe et al. reported a 50-year old female with latent vaginal choriocarcinoma 23 years after her last pregnancy (22). In that case, the primary tumor developed in the vagina without any uterine lesion, which is also an unusual presentation.

Desai et al. reported a 73-year old case of choriocarcinoma which was developed 38 years after the last pregnancy and 23 years after menopause (3).

The most common metastasis site in previously reported patients with CC was lung (80%). Similarly, our patient had multiple lung metastases at the time of diagnosis. The other common site for metastasis were vagina (30%) and liver (10%) (25). Prognosis of metastatic CC is generally poor. Biopsy from the metastatic lesions in CC should not be performed due to the high hemorrhagic tendency of these lesions.

CC is completely curable even in the presence of multiple metastases. Single - and multiple- agent chemotherapy is the treatment of choice in patients with CC. Hysterectomy could be performed in patients with severe life-threatening vaginal bleeding (5, 18, 26). In this case, the patient underwent surgery due to abnormal vaginal bleeding and remained on chemotherapy because of multiple metastases.

To the best of our knowledge, there are few case reports of choriocarcinoma with more than a year latent period after antecedent pregnancy. The molecular mechanisms of the long latent period between the development of CC and the last known pregnancy in these cases have not been described yet. The strongest hypothesis is having asymptomatic pregnancy during the period between the last pregnancy and the development of CC. However, the possibility of non-gestational choriocarcinoma in such cases should be considered. Treatment with a single- or multiple-agent chemotherapy regimen should be initiated for the patients with CC. Hysterectomy could be offered in patients with severe AUB.

Copyright © 2021, Author(s). This is an open-access article distributed under the terms of the Creative Commons Attribution-NonCommercial 4.0 International License (http://creativecommons.org/licenses/by-nc/4.0/) which permits copy and redistribute the material just in noncommercial usages, provided the original work is properly cited.
download pdf 3.62 MB Get Permission (article level) Import into EndNote Import into BibTex
Number of Comments: 0