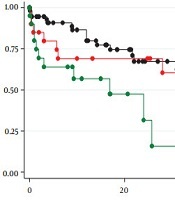 Recently, the predictive value of lymph node ratio (LNR, the ratio of metastatic lymph nodes to total examined lymph nodes) has been evaluated in patients with gastrointestinal malignancies, including pancreatic cancer. However, there is not enough evidence about the prognostic value of this factor.

We aimed at determining the value of LNR in predicting the survival of patients who have undergone the Whipple procedure.

This cohort study was performed on 96 patients with pancreatic cancer undergoing the Whipple procedure during 2014 - 2019. Demographic, clinical, and pathological data of the patients were extracted from their records and patients' survival status was determined through follow-up. LNR and its effect on survival was calculated using the Cox model.

LNR is a valuable indicator that can be used in patients with lymph node involvement as a prognostic factor for poor survival after the Whipple procedure. The lowest 1, 3, and 5-year survival rates were seen in patients with LNR > 0.20.

Pancreatic cancer is one of the deadliest malignancies and the seventh leading cause of cancer-related death worldwide (1) with a mortality rate of 97.7% (2). The 5-year survival rate is estimated to be 10% in all patients and 32% in patients without distant metastasis (3). Currently, surgery followed by adjuvant therapy is the most promising treatment, although surgery can only be performed in 20 to 30% of the patients (3-5) with only 10 to 20% chance of long-term survival (6, 7). Neoadjuvant treatments or postoperative adjuvant therapies are also associated with increased patient survival (8-10). Moreover, the experience of the surgical team and the age of the patients can also influence the mortality rate and patient survival (11, 12). Some pathological factors such as tumor size, lymph node status, surgical margin, and tumor grade are also considered as prognostic factors (8). Discovering prognostic factors that affect survival rate in patients with pancreatic adenocarcinoma can allow the physician to accurately select subsequent treatments and thus increase survival rates. One of the recently considered factors is lymph node ratio (LNR) which is the ratio of metastatic lymph nodes to total lymph nodes examined.

One of the main prognostic factors in determining survival rate is the presence or absence of involved lymph nodes (LNs), which may be affected by the total number of resected LNs. Although the minimum accepted number of total resected LNs is controversial but it depends on the experience and skill of the surgeon, and the precise pathology examination (13-16).

Most studies consider long-term survival after surgery in the absence of metastatic lymph nodes (13, 14, 17). Although lymph node involvement is a common condition in most patients undergoing surgery (14, 18), an increase in the number of metastatic lymph nodes can be a sign of poor survival (17). Ultimately, LNR evaluation has been suggested for predicting postoperative survival rate (19-23). There is no certainty about the value of this ratio and conflicting results have been reported (15, 17). Therefore, this study aimed at evaluating the value of LNR for predicting a 5-year survival rate in patients with pancreatic cancer undergoing the Whipple procedure.

This cohort study was performed on 96 patients with pancreatic cancer undergoing the Whipple procedure at Imam Reza Hospital, Mashhad, northeast Iran, during 2014 - 2019. Patients with pancreatic malignancy whose cancer could be resected based on clinical and radiological criteria were included. Patients with the unresectable or borderline resectable disease, presence of distant visceral metastasis, a pathological diagnosis other than adenocarcinoma, and history of receiving neoadjuvant treatments including radiotherapy or chemotherapy were excluded. All patients signed a written informed consent form before surgery. The ethics committee of Mashhad University of medical sciences approved the study. A pylorus-preserving Whipple procedure was performed for all patients and lymphadenectomy including LN stations no. 5, 6, 8a, 12b1, 12b2, 12c, 13a, 13b, 14a, 14b, 17a, and 17b.

All analyses in this study were performed using STATA software, version 12 (STATA Corporation, College Station, TX, USA, 2009). Firstly, all data from the observations were described by type. Descriptive statistics such as frequency (percentage), median, mean and standard deviation were used as appropriate. Survival was calculated using the Kaplan Meier method. Then the relationship between each demographic and pathological factor and survival was evaluated. To determine the accepted cut-off ratio of the lymph nodes, the survival chart was plotted for each of the possible cut-off points, and finally, in the multivariate model, the predictive value of the variables was reported by controlling other variables. P < 0.05 was considered as statistically significant.

Table 1. Characteristics of Patients under Study (N = 96) a

There was no association between sex, tumor size, tumor differentiation rate, disease stage, and the total number of metastatic lymph nodes and overall survival rate; although age (P = 0.04), surgical radial margin (P = 0.001), lymph node status (N0, N1) (P = 0.01) and LNR (P = 0.01) were the most important prognostic factors for survival in the patients. 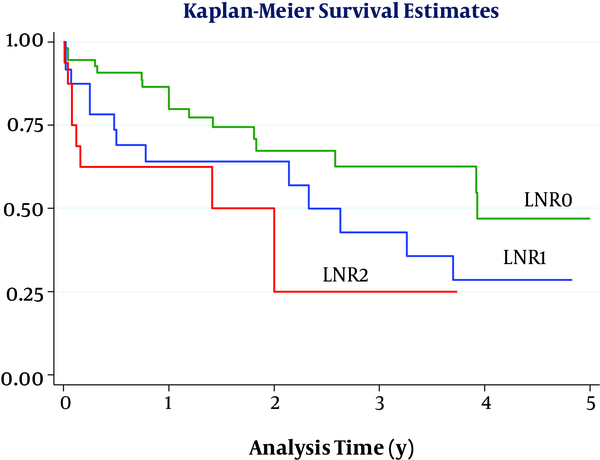 In this study, which lasted 5 years, 96 patients with pancreatic cancer who underwent the Whipple procedure were followed up to identify prognostic factors affecting their survival rate. Lymph node involvement and positive margin were prognostic factors for poor survival in patients with pancreatic cancer in this study which is in line with previous studies (14, 21, 22).

Using lymph node ratio can control these challenges and provide a better indicator of the total number of lymph nodes and lymph nodes involved (13). Therefore, our focus has been on determining the predictive value of lymph node ratio for patient survival. This study showed LNR can be used as a prognostic factor for survival in patients undergoing Whipple procedure, which is consistent with previous studies (18, 19, 21, 23, 28, 29). LNR was first proposed in 2004 as a predictor for survival in patients with pancreatic cancer in a study evaluating the survival rate in 128 patients undergoing pancreatectomy (13). Subsequently, in a second study on data obtained from 4005 patients with pancreatic cancer (SEER database from 1998 to 2003), LNR was reported as a prognostic factor for survival in patients (30). If this ratio is zero in patients, the highest survival rate of 1, 3, and 5 years would be expected (15, 31). Subsequent reports suggested that if this ratio was greater than zero, the mortality rate may even follow a linear pattern and increase with the increased LNR (14). However, researchers tend to categorize this ratio and determine a cut-off for it (19).

In the present study, the greatest difference in survival rate was seen at a cut-off point of 0.20, so that patients with 0 < LNR ≤ 0.2 had a higher 1, 3, and 5-year survival rate compared with those with an LNR > 0.2 and the lowest 1-year (62%) and three-year (25%) survival rate was seen in patients with LNR > 0.2 (although in this cohort no patient had an LNR greater than 0.20 and followed for up to 5 years). In general, determining the appropriate cut-off point is challenging when using any continuous quantitative ratio, because the cut-off must be able to separate statistically significant levels. In some previous studies, the median of this ratio was used as the cut-off point (25), but in the present study, we considered the median and the cut-off most studies reported as suitable (21).

The major limitation of the study was the sample size. Although the cut-off point of 0.2 would predict patient survival, it should be taken into consideration that 60 patients were N0 and few patients (16 cases) had LNR ≥ 0.2. As well, the small sample size in each different stage may affect the survival distinction between the groups and so we did not find any significant relationship between cancer stage and survival rate. Therefore, the results of this study should be confirmed by subsequent larger or multicenter studies. Another limitation was few examined lymph nodes in some cases which is related to the suboptimal examination of lymph nodes.

LNR is a valuable indicator that can be used in patients with lymph node involvement as a prognostic factor for poor survival after the Whipple procedure. The lowest 1, 3, and 5-year survival rates were seen in patients with LNR > 0.20.

The results that have described in this paper were a part of a MD student thesis proposal in Mashhad University of Medical Sciences.