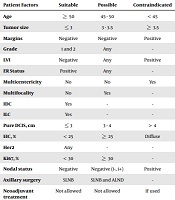 Radiotherapy plays an essential role in breast cancer treatment following breast conserving surgery even in good-risk patients with ductal carcinoma in situ (DCIS) histology. It can be delivered by many techniques, among which is intraoperative radiotherapy (IORT). In recent years, intraoperative radiation therapy has had the same outcome compared with EBRT.

We studied whether whole breast radiotherapy (WBRT) could safely be replaced by IORT and its ability to control local recurrence like EBRT in pure DCIS.

With the mean follow-up of 37 months for the IORT group and 40.1 months for the EBRT group, local recurrence occurred in 8.8% (5 patients), 13.9% (5 patients), and 2.2% (1 patient) of the patients in the EBRT, boost, and radical groups, respectively. Concerning the local recurrence, no significant difference was observed between the radical and EBRT groups (P = 0.058) and between the boost and EBRT groups (P = 0.12). Hazard ratios (HRs) of grade, hormone receptor (HR), tumor size, and age in disease-free survival were evaluated and none of these variables had a significant role in local recurrence.

IORT is a good alternative for WBRT in DCIS patients because of its non-inferiority results in comparison with EBRT. Being careful about age, tumor size, biological markers, and margin status is of high importance when using IORT for DCIS.

During the recent 2 decades, the rate of ductal carcinoma in situ (DCIS) has severely increased following the extensive implementation of screening mammography. One out of 3 new breast cancer cases is diagnosed annually (1). According to the local regional treatment pattern of DCIS in a recent surveillance, epidemiology, and end results (SEER) analysis, 69.5% and 43% of the patients were treated by breast conserving surgery (BCS) and radiotherapy following BCS or lumpectomy alone, respectively (2). Four prospective randomized III trials have shown the effectiveness of radiotherapy in reducing breast recurrence following lumpectomy (3-6).

Many retrospective analyses suggested outstanding findings with hypofractionated whole breast radiation, as well as partial breast irradiation in women suffering from DCIS (7-9). The majority of the local recurrences following BCS and radiotherapy for DCIS appear in the neighborhood of the main tumor and about half of them are invasive.

Rashtion et al. (11) treated 23 patients with DCIS with intraoperative radiotherapy (IORT) after lumpectomy. There was only 1 local recurrence in the 3-year follow-up. The patient had a high-grade DCIS and did not use hormone therapy. They concluded that, in special conditions, IORT can be an alternative for whole breast radiotherapy (WBRT) in patients with DCIS (11). In another study that investigated patients with DCIS in our center, 40 patients received EBRT and 29 patients received IORT. Local recurrence was significantly greater in the IORT group (17.25 vs 5.4%) because the intraoperative electron radiotherapy (IOeRT) group contained biologically high-risk patients and the patient selection criteria in the IRIORT consensus was not observed. Overall, 59.3% and 58.6% of the patients in the IOeRT group had high-grade and hormone receptor-negative tumors, respectively. Five local recurrences were reported; 2 cases had 3-cm and 4.5-cm tumors and 1 case was younger than 40 years old (12). In Stephanie et al.’s study carried out in North America, IORT was considered for 935 patients with breast cancer, 9% (95 patients) of whom were DCIS and 26% (25 patients) received supplemental external beam radiotherapy (EBRT). Local recurrence occurred in 3% (3 patients) with a mean follow-up of 1.5 years (13).

In this study, we delivered IORT with 2 types of electron beams and photon, which were delivered by LIAC (made in Italy) and INTRABEAM ZEISS (invented in America) mobile linear accelerators, respectively. We divided patients into radical and boost subgroups according to the IRIORT consensus criteria (Table 1). We attempted to evaluate the results of IORT for patients with DCIS compared with those who received EBRT.

We studied 138 breast cancer patients with DCIS histology treated in 3 centers affiliated to the Cancer Research Center of Shahid Beheshti University from September 2013 to September 2019. The study was approved by the Ethics Committee of the Cancer Research Center, Shahid Beheshti University of Medical Sciences. Written informed consent was taken from the patients.

Patients who received IORT were divided into two subgroups based on their clinical, pathological, and biological characteristics to receive radical or boost dose of radiotherapy by IORT according to the IRIORT consensus criteria (Table 1); they, then, were compared with the EBRT group.

20 Gy 50 kV IOxRT was delivered after the report of clear margins in the frozen section. After the final pathology report, if patients had demographic, pathologic, and biological criteria of the suitable and possible group in IRIORT, they would be considered as radical dose, otherwise, they would be considered as boost dose and the patients would receive supplemental EBRT. The patients, who could not complete the treatment process or forgo it, were excluded from the study.

The present longitudinal non-randomized cohort study evaluated the distant metastasis and local recurrence in patients with DCIS with the mean follow-up of 37 and 40.1 months for the IORT and EBRT groups, respectively. The current research was carried out from September 2013 to September 2019 in our center. The primary endpoints were recurrence (local and distant) and death and the secondary endpoints were the role of age, tumor size, grade, and hormone receptor (HR) factors in recurrence and death by univariate and multivariate Cox proportional hazards regression model.

The survival plots and the cumulative hazard function were drawn, using the Kaplan-Meier method. The log-rank test was used to evaluate the survival difference between the two treatment radiotherapy groups, as well. The data were analyzed by SPSS.

Table 2 presents the characteristics of patients and tumors of the EBRT and IORT groups.

Table 2. The Clinical and Pathologic Characteristics of the EBRT and IORT Groupsa

The log-rank test was used to assess the DFS difference between the treatment groups. No significant difference was observed in the boost (P = 0.12) and radical (P = 0.95) groups compared with the EBRT group. But, when we compared radical and boost groups, the radical group had a better DFS (P = 0.007) (Figure 1). 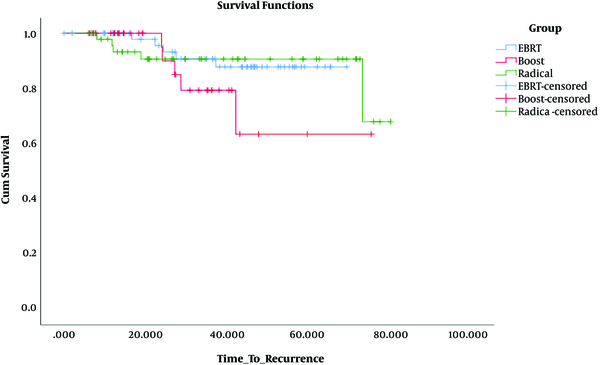 Cumulative incidence of disease-free survival in the IORT and EBRT groups.

The most difference in DFS was observed when we compared the electron radical group with the X-ray boost group (P = 0.017) (Figure 2). 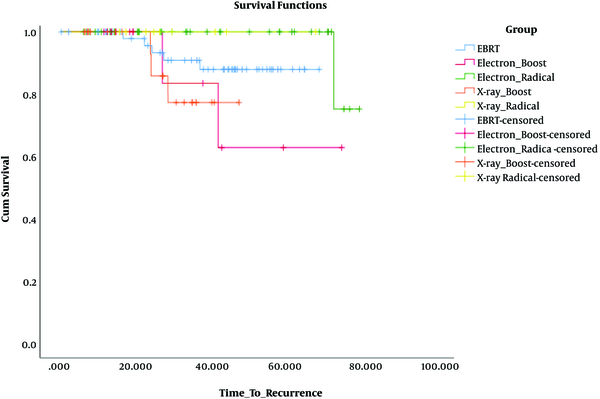 Cumulative incidence of disease-free survival in the IORT and EBRT groups separated by beams.

Local recurrence occurred in 8.8% (5 patients), 13.9% (5 patients), and 2.2% (1 patient) of the patients of the EBRT, boost, and radical groups, respectively. Of 5 patients in the boost group that showed recurrence, 3 were younger than 40 years, 2 had hormone receptor-negative tumors, 2 had a high-grade tumor, and 2 had tumors with 6 cm size. The patient in the radical group that showed recurrence had negative hormone receptor and high-grade tumor.

Some factors linked with the elevated rate of local recurrence in DCIS, like patients presenting with a palpable mass, are related to local recurrence more than those presenting with mammographic abnormality (4) or younger age in diagnosis (14), high grade, DCIS size (15), negative hormone receptor (16), and margin status (17). The higher incidence rate of DCIS in SEER analysis was because of mammography detection and most of them were non-comedo types (2). With this increasing number of patients with pure DCIS detected with screening mammography, doing radiotherapy by the IORT technique has a socio-economic benefit for patients and treatment systems. They can save their time and money and reduce the travel rate by this method.

IORT was not allowed for DCIS in the first guideline of the American Society for Radiation Oncology. However, in 2017 revision, it was allowed for mammography-detected cases and low- or intermediate-grade DCIS of ≤ 2.5 cm with the surgical margins of ≥ 3 mm. Concerning the patients with and without the history of receiving radiation, the former group was meaningfully less likely to experience the repetition of BCS for recurrence status. The women with the history of receiving radiation after surgery, at the initial time of DCIS diagnosis, experience more complications following surgery for recurrence (18).

We can preserve breast in local recurrence of those patients that received IORT in their first surgery with less experience of surgery complications.

So, as an appropriate alternative, IORT will deliver the secure dose of radiotherapy and preserve BCS if local recurrence happens.

IORT is a good alternative for WBRT in patients with DCIS because of its non-inferiority results in comparison with EBRT, its convenience for patients, and its protection of patients from EBRT complications. Besides, the patients need no long-lasting search for radiotherapy centers.

Being careful about age, tumor size, biological markers, and margin status is of high importance when using IORT for DCIS.