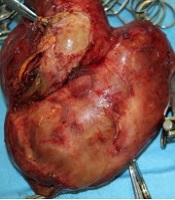 A Cardiac Approach to Wilms Tumor with Tumor Thrombus Extension to the Right Atrium Without Cardiopulmonary Bypass: A 5-Year Follow-up

Wilms tumor is the most common kidney cancer in children, but Wilms's tumors that extend by direct intravascular spread into the right side of the heart are rare and at this stage, they require the cardiac surgeons’ intervention.

The patient was a 2-year-old girl who was hospitalized due to fever and abdominal pain that had started 2 weeks before admission. Patient’s full abdominal exams revealed a large mass in the right kidney with a thrombus tumor in the entire inferior vena cava which was extended into the right atrium. Patient completed 8 weeks of neoadjuvant chemotherapy. After chemotherapy no changes was noted in renal mass and tumor thrombus. As, the thrombosis in the atrium was loose and there was a high risk of pulmonary embolism, emergency surgery was needed. Two pediatric and cardiac teams, simultaneously performed the surgery without cardiopulmonary bypass and cardiac arrest. Both kidney mass and the thrombus tumor were completely removed. Patient followed up for 5 years after surgery and no surgical complications, tumor recurrence, or metastasis were observed during that period.

Wilms' tumor (WT), also known as Nephroblastoma, is the most common childhood (90% of cases) malignant tumor of the kidney and the second most common abdominal malignancy in children (1). However, less than 1% of these tumors growing into the atrium and become thrombotic tumors (Daum stage IV) (2). Wilms' tumor treatment consists of surgery and chemotherapy with or without radiotherapy (1). Tumor resection is the main treatment of WT. In this surgical procedure, both the renal mass and the thrombus tumor inside the right atrium and inferior vena cava will be removed completely. If the thrombus tumor has spread inside the right atrium, the patient will undergo abdominal and cardiac surgery simultaneously (1, 3).

Although, these surgeries needed to be done with cardiopulmonary bypass (CPB) and cardiac arrest (3). In the presented patients of this report, a thrombus tumor was removed from the right atrium without cardiac arrest. Since there is evidence of tumor recurrence or metastasis within the first 2 years after surgery (1), in the presented patient there were no surgical complications, metastasis or tumor recurrence noted within 5-year follow-up.

A 2-year-old girl was hospitalized due to abdominal pain and fever that began 2 weeks before admission. She was the first baby born from a twin pregnancy through cesarean section. She was born at 30 weeks weighing 1500 grams (3 lbs 3 oz). Although the patient was born preterm and she had a normal development for her age.

Immunization was up to date. The patient had no family history of WT and no recent weight loss was reported. In palpation, there was a soft solid mass approximately of 10 × 12 cm in the right abdominal quadrant. There was no genitourinary abnormality, aniridia, or hemi hypertrophy noted. Abdominal pelvic spiral CT scan with IV contrast showed the heterogeneous mass measuring 168 × 87 × 132 mm with internal hypodense that suggested hemorrhage or necrosis (Figure 1). According to the radiology report, a mass was observed in the right hemiabdomen originating from right kidney and extending up to right hemidiaphragm. The right lobe of liver was affected and only a thin rim of normal renal parenchyma was seen in the lower pole. There was tumoral thrombosis of the right renal vein and inferior vena cava (IVC) which extended up to the right atrium. Periportal hypodensity in the liver and retroperitoneal lymphadenopathy were seen and the head and body of the pancreas were displaced to the left side. Spiral CT scan of the thorax with IV contrast showed 2 parenchymal nodules measuring14 mm and 6 mm in the left upper lobe which could suggest metastasis and large heterogeneous hemorrhagic mass in the subdiaphragmatic area (Figure 2). Thrombosis of IVC with extension to the right atrium was also reported. Echocardiography demonstrated a mass involving all IVC and right atrium that was observed in the right ventricle in each systole. Diastolic and systolic were normal. 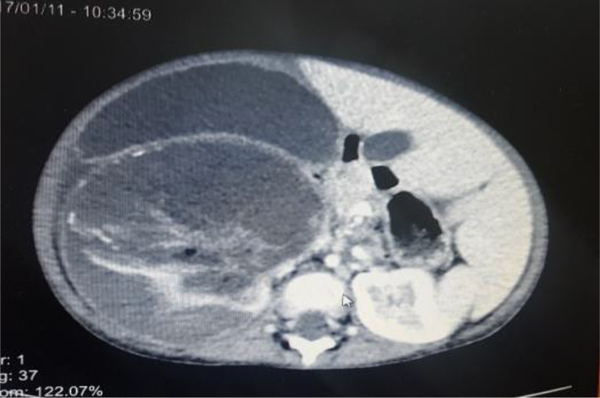 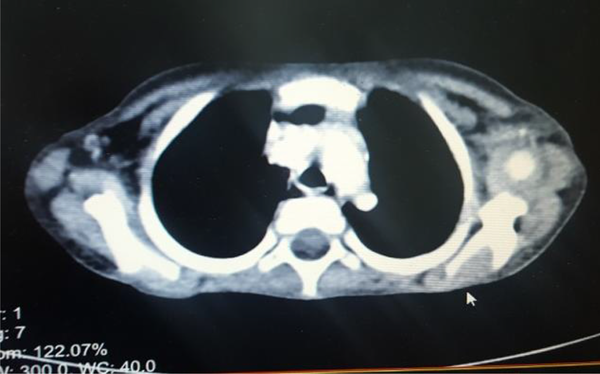 Some WT cases are candidates for emergency surgery due to unsuccessful neoadjuvant treatment, the presence of loose thrombosis inside the atrium, and the high risk of pulmonary embolism. In the present case, neoadjuvant chemotherapy was completed for 8 weeks. There were no changes noted in renal mass and thrombotic tumor after this period and the thrombotic tumor remained intact. Surgery was performed by a pediatric surgeon and cardiac surgery team for primary renal tumor and cave-atrial tumor thrombus removal. Transesophageal echo (TEE) was done by an anesthesiologist, at the same time.

At the beginning of the surgery, the mid sternotomy was performed, the pericardium incised, and the heart exposed. Mass was felt inside the inferior vena cava and right atrium. It was mobile inside the right atrium and no adhesion was felt to the wall of the right atrium. The umbilical tape was passed through the inferior vena cava and superior vena cava for control. In order to reduce the risk of pulmonary artery embolism, transesophageal echocardiography (TEE) was done by the anesthesiologist throughout the surgery. Everything was prepared for the possible cardiopulmonary bypass (CPB) such as stiches on the atrial aorta for cannulation.

The abdominal transverse incision was used for complete renal mass removal (Figures 3 and 4). The incision was made on the distal inferior vena cava and the thrombus tumor was gradually pulled down. 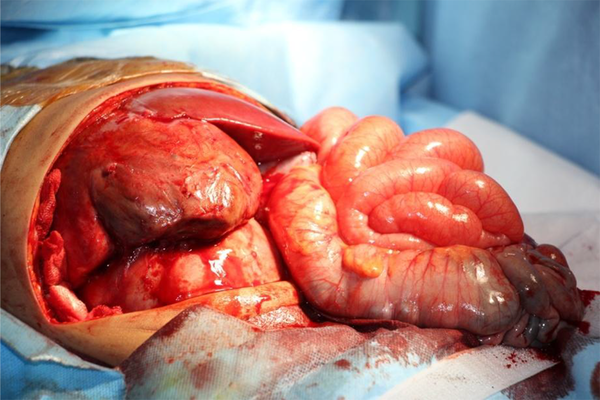 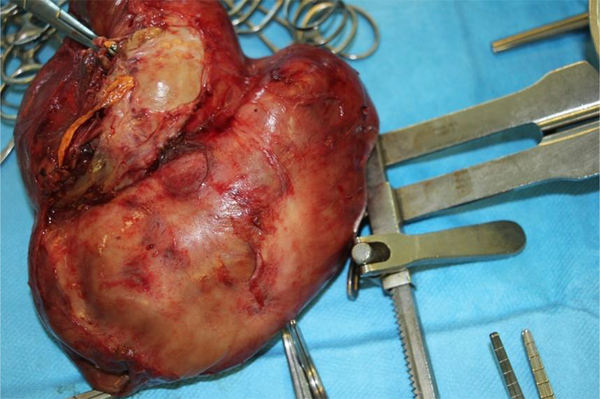 Since the tumor thrombus was loose with minimum adhesion, the right atrium was gently dragged into the intra-abdominal IVC. The string around the IVC was tightened to prevent further embolism and blood flow to the heart was temporarily cut off through IVC. The thrombus was completely removed through the incision made at the junction of the renal vein to the IVC. The entire abdominal mass was also removed and the IVC was repaired by a graft. There were no palpable masses remained in the right atrium and IVC and it was also confirmed by TEE. The stitches around the IVC were released and no thrombosis was seen in the heart and IVC.

The patient was transferred to the pediatric intensive care unit (PICU) after surgery. There were no complications noted during the postoperative period. The pathology report showed Wilms tumor with extension. The post-operative adjuvant chemotherapy regimen was delivered to the patient and no morbidity was reported on 6-month follow-up. The metastatic lesions in the lungs were eliminated after chemotherapy and no complications were observed within 5 years routine of follow-up.

In the case of Wilms tumor, like other medical procedures, the teamwork, and multidisciplinary approach will have a desirable effect on prognosis and treatment even in cases with cardiac involvement and without CPB.

Written informed consent was obtained from the patient’s parents.

The Wilms' tumor usually presents with asymptomatic abdominal mass (1). In children, any abdominal mass should be considered malignant unless otherwise specified by lab and imaging (1, 3).

Wilms' tumor is the most common renal tumor in children and accounts for 6% of all pediatric malignancies. It mostly affects children less than 5 years old, with 90% of new cases diagnosed before age 3 years. The incidence rate is 8 patients per one million (1). Wilms' tumor (WT) is mostly sporadic and about 2% have a positive family history (1, 2).

The reported patient was a 2-year-old child presenting with an abdominal mass. This mass can enlarge since retroperitoneal masses can continue their development with no anatomic impediment and functional defects in the adjacent organs appear later (1). In 4 to 10% of the patients, the thrombus induced by Wilms' tumor extends into the inferior vena cava and rarely into the right atrium (1). Based on the tumor extension into the renal vein and inferior vena cava according to the classification proposed by Daum et al., tumor thrombus is classified into 4 stages (2, 4). In stage I, the maximum length of the tumor thrombus is 5 cm, reaching the IVC and terminating at the lower hepatic edge. In stage II, the tumor reaches the junction of the hepatic vein. In stage III, tumor thrombus extends to the hepatic veins in 4 to 8% of the cases. In stage IV, tumor extends into the atrium and this stage has been observed in 1% of the cases.

The patients in stages II and IV occasionally present with IVC obstruction or congestive cardiac failure, in which case the outcome will be catastrophic (5, 6) and when they present with heart failure, the outcome is often not good (7). Wilms' tumor or intravenous thrombus is not clinically common in children (8). In the reported patient, although tumor thrombus was in stage IV and had almost filled up the entire IVC, no IVC obstruction or heart failure symptoms had occurred. The basis of Wilms' tumor treatment in children is surgical excision of the tumor and tumor thrombus.

Chemotherapy is recommended to shrink the tumor and its fibrosis when the patient is in stage III or IV and has an atrial extension (9, 10). When shrinkage does not occur in spite of pre-surgery chemotherapy and some progression is even observed, surgery must be carried out as soon as possible (11, 12).

Since rupture of the tumor, extensive hemorrhage, and embolism are possible during surgery in cases with no prior chemotherapy, pre-operative chemotherapy is recommended, albeit for a few weeks, to reduce the tumor size and the likelihood of rupture during surgery and to prevent the spread of tumoral cells and their vascularization (1, 2, 10, 13). Although mortality has been reported during chemotherapy as a result of complications such as hemorrhage and tumor (14), chemotherapy can cause shrinkage of the tumor and sometimes IVC or reduce its extension into the right atrium (2, 15).

In 30% of cases, even with preoperative chemotherapy, the persistent cavo-atrial tumor is still present or even spread (9). In this situation, tumor resection with CPB is the best treatment option (9).

In the presented patient, the size of the thrombus tumor did not change and the mass remained in the atrium despite 8 weeks of chemotherapy. In a study conducted by Xu et al. (2019), 42 cases of Wilms' tumor with tumor extended into the atrium, underwent cardiac surgery with CPB and cardiac arrest (3). In that study, 10 out of 42 patients had intraventricular thrombosis (Daum stage IV) and completed a preoperative chemotherapy regimen. In 5 patients, tumor shrinkage happened and they did not require CPB during surgery. In 5 patients, eventually developed intraventricular thrombosis, CPB was performed by the cardiac surgeon. In all cases, the atrium was incised (3). If CPB and cardiac arrest can be avoided, the side effects of CPB such as cytokines, interleukins, and other inflammatory mediators release may be preventable. It will also minimize the risk of bleeding, the need for blood transfusions, and the risk of heart function deficit.

Some Wilms tumors in stage III and IV are not sensitive to chemotherapy and in only 50% of cases, the tumor size may change. Even if the thrombus tumor responds to chemotherapy, the tumor needs to re-assess preoperatively, therefore, imaging studies will be needed (3). In presented studies, no association between tumor thrombus and the pathological classification of WT was found.

The reported patient was followed up for 5 years (most recurrences occur within the first 2 years) and showed no evidence of embolism, metastasis, or tumor spread.

Wilms tumor treatment is a multidisciplinary approach. Cardiac surgeons' involvement is necessary if the patient is in stages III or IV. If the thrombotic tumor is observed in the right atrium, it may be removed without cardiac arrest. Decision will be made separately for each patient. If there is no adhesion to the atrial wall, surgery may be performed without CPB with precautions. In our reported case, cardiac surgery was performed without the use of CPB. Since surgeries are high-risk procedures, it was attempted to prevent further risk for the patient.