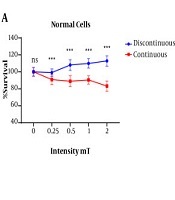 Attention to the electromagnetic exposure as a targeted tumor therapy has been recently increasing.

The aim of the current study was to investigate the effect of continuous and discontinuous electromagnetic fields on cell viability as well as phosphatase and tensin homolog (PTEN) and circular (circ)-RNA CDR1as genes expression in the normal and gastric cancer (GC) cell lines.

After preparing gastric cancer cell lines (AGS) and normal cells (HU02 line), they were exposed to magnetic flux densities of 0.25, 0.5, 1, and 2 mT continuously and discontinuously (1h on/1h off) for 18 hours. The 3-(4,5-dimethylthiazoyl-2-yl)-2,5-diphenyltetrazolium bromide (MTT) assay was used to evaluate cell viability. In addition, after designing the primers, the expression of the PTEN and circ-CDR1as genes was studied using the real-time polymerase chain reaction (real-time-PCR) technique. The results were analyzed using SPSS software version 25.

In general, the effect of electromagnetic field on gastric cancer seems to depend on the kind of exposure as well as an extent of intensity and can be used for cancer therapeutic purposes. However, more research is needed on this subject.

Cancer is the first and the second leading cause of death in developed and developing countries, respectively. Gastric cancer (GC) is known as the most common cancer and the second leading cause of cancer death in the world (1). GC is one of the most common malignancies worldwide. This disease is multifactorial disease, and many factors such as infectious, environmental and genetic factors are involved in its occurrence (2). The effectiveness of early prevention programs depends on the knowledge available about the GC risk factors. Numerous risk factors such as occupational and environmental exposure (3) have been found for GC.

Over the past few decades, researchers have drawn attention to the potential threats of devices that produce weak electromagnetic fields in homes, workplaces, hospitals, or even the electronic tools that people carry with them, (4). In the living environment, the most common frequency used by devices is between 50 - 60 Hz and their current intensity varies between 6 and 10 amps. Therefore, the intensity of the magnetic field obtained from these devices varies between 0.1 and 8 mT, depending on the current intensity and the distance from the device (5). They can lead to various biological effects depending on the density, frequency, and duration of their radiation (6). Electromagnetic waves have been reported to cause breast cancer in men (7) and various types of cancer in Norwegian workers (8).

One of the genes in which mutations cause GC is the phosphatase and tensin homolog (PTEN), which is responsible for tumor suppression and is located on chromosome 10q23.3 (9). This gene induces apoptosis and inhibits tumor cell proliferation, cell binding control, migration, tumor invasion (10), and decreased cell differentiation (9). Progression of GC has been shown to associate with inactivation of PTEN through genetic mutation (11), heterozygous elimination (12), and promoter hypermethylation (13). Therefore, the inactivation of this gene in GC plays an important role in tumor progression. A novel type of non-coding RNAs is known as circular RNAs (circ-RNAs) have played as critical regulators in various cancers such as GC (14). The biological processes, cellular functions, and pathological processes such as tumoral cell invasion, migration, and proliferation are affected by circ-RNAs (15). In GC, circ-RNAs have been shown to affect gene expression, and there have even been advances in the use of circ-RNAs as diagnostic and prognostic tools and therapeutic targets (16). The circ-CDR1as circ-RNA is located on chrX: 139865339-139866824. circ-CDR1as has been considered as a risk factor for hepatocellular carcinoma (17). circ-CDR1as has been shown to act as an oncogene via the stimulation of tumor cell proliferation and cell migration in a variety of cancers (18).

Since the importance of PTEN and circ-CDR1as in cell apoptosis and proliferation and their role in tumor progression, the aim of the present study was to investigate their expression level changes following the exposure of various electromagnetic fields in human GC cell line (AGS).

The AGS cell line and HU02 were obtained from the National Genetic Resources Center of Iran and then the cells were cultured according to the instructions. AGS cell line was cultured in Ham's F12 medium containing 10% fetal bovine serum (FBS) (Gibco, USA). Normal HU02 cells were cultured in Dulbecco's modified Eagle's medium (DMEM) (Gibco, USA) containing 10% FBS, 2 mL of L-glutamine, and 1% penicillin/streptomycin (Gibco, USA). The cells were exposed to electromagnetic fields at a magnetic flux density of 0.25, 0.5, 1, and 2 mT continuously and discontinuously with 1 hour interval time for 18 hours. The control and exposed groups were incubated in a constant condition of temperature, humidity, and CO2.

A solenoid cylinder with a diameter of 12 cm, height of 30 cm, and 1200 turns was used to produce electromagnetic fields (6). An AC power supply (TDGC2, 220v, 50 - 60 Hz Delta International Electric, Shanghai, China) was applied to produce various electromagnetic intensities using city power with a frequency of 50 Hz (19). The electromagnetic field generated inside the solenoid is uniform and in the direction of the cylindrical axis. The solenoid cylinder was horizontally placed at the center of the CO2 incubator and flasks of cells were placed at the middle of the cylinder.

The 3-(4,5-dimethylthiazoyl-2-yl)-2,5-diphenyltetrazolium bromide (MTT) assay was used to measure cell viability. For this purpose, the supernatant was firstly separated and removed by centrifugation at 2500 rpm. The MTT solution was then added to the tubes containing tumor and normal cells in a mitochondrial isolation buffer, after which the tubes were incubated for 4 hours at 37°C. After 4 hours of incubation, 200μL dimethylsulfoxide (DMSO) was added to each tube and shaken well to dissolve all formazan crystals. Then the solution was transferred to a 96-wells plate and after one hour the adsorption was read at 560 nm by micro plate reader (Synegry HT, USA).

RNA was extracted by a chloroform-ethanol method using lysis solution (Trizol sigma Aldrich) and its quality and quantity were evaluated using nanodrop (Thermo Fisher Scientific, USA) and electrophoresis on 1.5% agarose gel. Oligo (dT) or random primers and cDNA synthesis kit (BioFACT, South Korea) were used for cDNA synthesis. The instructions of the kit manufacturer for cDNA synthesis were followed. The polymerase chain reaction (PCR) temperature program used for cDNA synthesis was 65°C for 5 min, 55°C for 30 min 95°C for 10 seconds. The synthesized cDNAs were stored at a -20°C freezer.

Glyceraldehyde-3-phosphate dehydrogenase (GAPDH) gene was used as an internal control. The primer design was done using primer 3 software and then examined using IDT and Gene runner softwares. The primer sequences of GAPDH, PTEN, and circ-CDR1as are shown in Table 1.

The real-time polymerase chain reaction (real-time-PCR) timing and temperature program started at 95°C for 30 seconds for cDNA denaturation. In the next step, 40 cycles of 95°C for 5 seconds and 60°C for 31 min were performed. In the next step, the temperature cycle of 95°C for 15 seconds, 60°C for 30 seconds, and 95°C for 15 seconds was used. The cycle of threshold (CT) was determined by Bioneer software. The relative expression of genes to the housekeeping gene was calculated by measuring the delta threshold cycle value (ΔCT) for each sample. Delta delta cycle value (ΔΔCT) was then calculated from the difference between ΔCT of exposed tumor or normal cells and the control group. The fold change of gene and miRs expression was then calculated by the 2−ΔΔCT formula. The PCR efficiency was calculated for the instrument and considered in the formula. The CV% for 10 separate measurements of RNA expression was 11.7.

Data analysis was performed using SPSS software version 25. The results are shown as mean ± SD. To compare the significant differences among the groups, a two-way analysis of variance and Tukey Post hoc test were used. The level of probability for the significant differences among the groups was considered as P < 0.05. The correlation between PTEN and circRNA-CDR1as was also investigated. 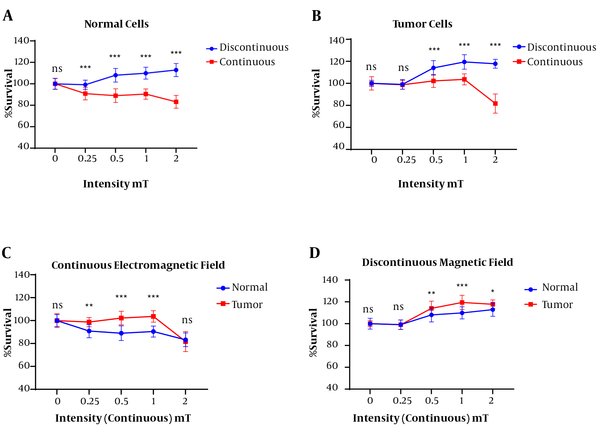 The results of the present study showed that in the exposed the tumor cell with a discontinuous magnetic field resulted in a significant increase in cell survival compared to the exposed normal cell at the same condition (Figure 1D).

The expression level of circ-CDR1as in the normal cells was increased under the exposure to the discontinuous electromagnetic fields of 0.5 (P < 0.0001) and 1 mT (P < 0.05) intensities when compared to the tumor cells. However, no significant difference in the expression of this gene was observed in the normal and tumor cells at the discontinuous electromagnetic field of 0.25 and 2 mT (Figure 2A).

Figure 2. The expression of A, circ-CDR1as; and B, PTEN genes in normal and gastric tumor cell lines under the exposure of discontinuous magnetic field.

Figure 3. The expression of A, circ-CDR1as; and B, PTEN genes in the exposed normal and AGS cell lines under continuous magnetic field.

Figure 4. The expression of A, circ-CDR1as; and B, PTEN genes under the exposure of various intensities of continuous and discontinuous magnetic fields in gastric tumor cell line.

Figure 5. The expression of A, circ-CDR1as; and B, PTEN genes in the exposed normal cell with discontinuous and continuous magnetic fields. 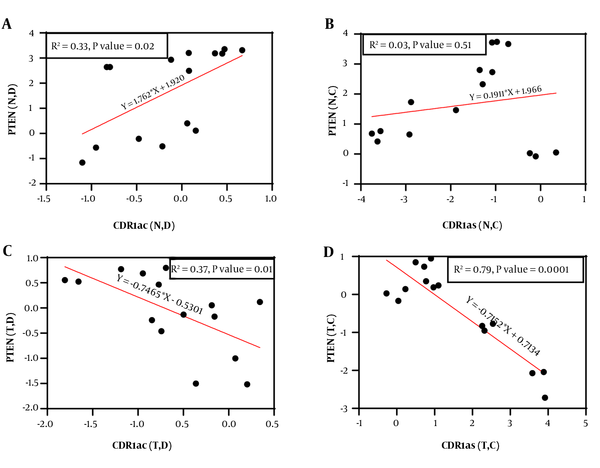 Attention to electromagnetic exposure as a targeted tumor therapy is increasing recently (20). In addition, due to modern living conditions, exposure to electromagnetic fields caused by various devices is inevitable, which can be created from natural sources or by man-made sources such as diagnostic equipment, nuclear power plants, television receivers, and the like. In the current study, the effect of continuous and discontinuous electromagnetic fields exposure at various intensities on AGS cell viability, PTEN, and CDR1as genes in the normal and GC cell lines was aimed. The effects of electromagnetic fields on the biological system have been extensively studied (21, 22). However, due to the uncertainty of the results and the uncertainty of the mechanism of action of these fields, more studies are needed.

The authors would like to thank Ms. Hadiseh Mohammadpour and Ms. Neda Tekiyemaroof, from Cancer Institute of Iran and Razi Drug Research Center.