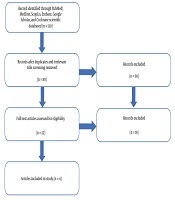 Increased survival of patients with cancer raises the need to pay attention to long-term side effects. Patients with brain metastasis experienced cognition failure after whole-brain radiotherapy. This review aimed at concluding the efficacy of Memantine in preserving cognitive function by reducing the brain toxicity of whole-brain radiotherapy for metastatic brain cancers.

A total of 4 prospective clinical trials were included in the review. Effects of Memantine on cognition tests were evaluated in these trials. A significantly better Hopkins Verbal Learning Test-Revised (HVLT-R) delayed recognition at months 6 was achieved in RTOG 0614 and NRG CC001. Longer time to cognitive decline was found in the memantine arm of the RTOG trial and was statistically significant. Memantine effects were not statistically significant before 2 months.

It seems reasonable to consider Memantine during radiation to prevent long-term cognitive failure in patients with brain metastasis due to the current results. Memantine improves cognition function during whole-brain radiotherapy (WBRT) without adding irreparable complications.

Brain metastases develop in about 20% of patients with cancer. This percent has recently risen: An estimated 150,000 to 200,000 patients are annually diagnosed with this intracranial neoplasm. The Standard of care for patients with brain metastases is whole-brain radiotherapy (WBRT), historically. Besides, WBRT is a mainstay of prophylaxis treatment for the microscopic disease, particularly in children with acute lymphocytic leukemia (ALL) who are candidates for prophylactic cranial irradiation (PCI) (1).

Thanks to the high detection technologies, these kinds of metastasis are diagnosed at early stages. Therefore, people live longer even after brain metastases development. Accordingly, this has led to paying particular attention to these patients’ quality of life and a renewed focus on treating and ongoing treatment sequel (2). However, this treatment modality has some known acute and chronic toxicities that affect the quality of life. The significant side effect of radiotherapy is declining long-term cognitive performance, especially on processing speed and executive function (3, 4). The hippocampus and prefrontal cortex are 2 neurocognitive domains affected by radiation (5). Based on the Tallet et al.’s meta-analysis, 31% - 57 % decline in neurocognitive functioning during 3 months, and 48% - 89% during one year after prophylactic WBRT with various doses were concluded (1).

There are multiple unknown interacting and synergistic mechanisms that induce cognitive decline after radiation, and its genesis also is complex. Therefore, several hypotheses have been proposed to explain and prevent this toxicity (5). Vascular insufficiency and infarction after radiotherapy is the hypothesis of radiation-induced vascular accelerated atherosclerosis and their mineralizing microangiopathy. Prevention of these vascular injuries is the prompting factor for prescribing memantine (6). The pathologic process in which nerve cells are damaged by excessive stimulation by neurotransmitters like glutamate is excitotoxicity (7). So, as an N-methyl-d-aspartate glutamate receptor blocker, Memantine is effective in vascular dementia treatment. This drug is currently concomitantly prescribed for patients receiving WBRT to protect them against potential radiation glutamate-induced excitotoxicity.

Memantine is available as oral tablets of 5 mg and 10 mg. Its bioavailability is 100 % so that it can be administered with or without food (8). The routinely prescribed dose of Memantine for adult patients with brain metastases who received WBRT is 20 mg/d initiate for the first 3 days of radiotherapy and lasts for 24 weeks (6). Memantine is partially metabolized in the liver and excreted by the kidney. It is mainly excreted in the urine with about 60-80 hours of terminal elimination half-life (9). Dose adjustment is needed in renal or liver impairment, and in patients with severe renal impairment, daily doses should not exceed 5mg twice daily (10). Its metabolism is independent of the CYP450 enzyme, and its terminal elimination half-life is about 80 hours. Common side effects of this drug are dizziness, headache, confusion, diarrhea, and constipation. The increased incidence of cardiac events is reported in clinical trials, so it should be prescribed with caution in patients with risk factors (9). This drug’s main interactions are cimetidine, ranitidine, procainamide, quinidine, quinine, and nicotine (11).

The aim of the current study was to review and compile previous literature data and the results of research studies focusing on memantine efficacy in controlling cognitive side effects resulted from whole-brain radiotherapy of brain metastases.

This article did not claim as a systematic review. However, it has been tried to be performed in terms of the searching plan and review protocol of systematic reviews. A literature search was performed for the relevant published studies reporting memantine prescription for those patients who underwent whole-brain radiotherapy and its effect on cognitive performance using medical subject headings (MeSH). The search was not restricted by the publication date, but only those written in English were included. Some databases such as PubMed/ Medline, Scopus, Embase, Google Scholar, and Cochrane scientific databases were searched for the articles using the following key terms: “memantine”, “whole-brain radiotherapy”, “cognitive”, “whole brain irradiation”, “cognition”, and “neurocognitive”. Duplication, conference proceedings, and editorials or letters were excluded. Reference lists of the included studies were also screened to identify additional eligible publications.

The titles of articles and abstracts were reviewed, and the irrelevant ones were excluded following the selection criteria. The studies that evaluated memantine effect on cognitive dysfunction of metastatic brain patients receiving WBRT and phase I, II, or III trials were included. Moreover, those trials involving these cases even in one of their arms and the ongoing ones were also considered. The publications that reported pediatric patients of primary brain tumors and those who used the stereotactic radiosurgery (SRS) technique were also excluded. Besides, the studies in the cellular phase were not considered.

The extracted publications were subjected to full-text review for further eligibility determination. Two of the authors reviewed these studies to ensure the methodological quality, and studies were rejected when ineligible or any bias was found. In this step, for an article that inclusion eligibility was ambiguous for the 2 authors, the third author was present to settle the disputes. A summary of the used search strategies is presented in Figure 1. 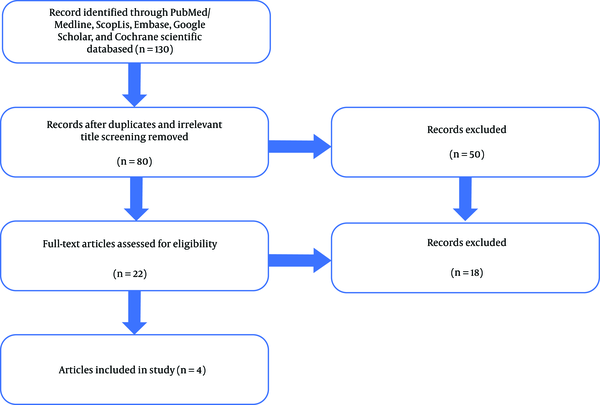 Four publications met the final inclusion criteria after the full-text screening, for which the extracted data are summarized in Table 1.

Brain toxicity after radiotherapy happens in 3 phases. The first or acute phase starts simultaneously with the first radiotherapy fraction. The second phase or sub-acute occurs bypassing 3 - 6 weeks from radiotherapy, which is frequently reversible. The third phase, or the delayed-late phase, begins 6 months after the completion of treatment. Patients experience a cognitive decline in this phase that can be progressive (13). It has been made clear that changes in synapses consist of proliferation and the increased excitatory, occurring during the first days of radiation, which is then followed by a decrease in synapses and the pathogenesis of cognitive impairment.

Multiple cell line studies evaluated Memantine’s effects on central nervous system injuries (14, 15). Some clinical trials have been designed based on these evaluations, the proven results of this drug on brain edema, and damages similar to radiation-induced damages. Administration of Memantine even before radiation would be protective in future synapses remodeling (16).

In the RTOG 0614 trial published in 2013, memantine protective effects were assessed. The patients randomly received whole-brain radiotherapy with or without Memantine. Memantine was administered with a 20 mg/day dose during the first 3 days of radiotherapy and then continued for 6 months. The participants were patients with brain metastasis with Karnofsky Performance scale (KPS) ≥ 70 from all age groups. Based on some previous studies reporting that neuronal damage begins during the first days of radiotherapy, so Memantine should be started as soon as possible. Less decline in delayed recall in the memantine arm was found, but it was not statistically significant (P = 0.059).

Moreover, secondary endpoints such as the probability of cognitive dysfunction were better in the memantine arm, and these patients experienced better executive function at the 8th and 16th weeks (P = 0.008, P = 0.004) as well as processing speed (P = 0.01) and delayed recognition at the 24th week (P = 0.01). The memantine arm had a significantly longer time for cognitive decline (17). Of 554 patients, only 149 (29 %) subjects were available for cognitive tests after 6 months. The limited life expectancy of patients with brain metastasis makes assessing the long-term treatment results difficult. It is noteworthy that patients with ages more than 70 years old were included in this trial, and such geriatric patients could have primary memory dysfunction. Previous brain radiotherapy or surgery could be useful on this result, but it has not been considered in the inclusion criteria. Grade 3 - 4 toxicity was 28% for each arm, which was not statistically different between the 2 arms (6).

Dynamic contrast-enhanced MRI has been used to evaluate the effect of Memantine as a radioprotector. In this pilot study, 12 of 14 participants were enrolled in RTOG 0614 trial to receive WBRT ± memantine who underwent MRI at baseline, 8 weeks, 16 weeks, and 24 weeks after the beginning of WBRT. Patients who received Memantine had a better vascular permeability in tumors and normal-appearing white matter (3).

A secondary analysis was performed on RTOG 0614 patients’ data to assess cognition by subjective tests rather than objective tests. This report was published in 2018, which showed that despite differences in objective cognitive tests between the 2 arms, health-related quality of life was not different (3).

Hippocampus is a less common region for metastasis in the brain (5), so avoiding hippocampal radiotherapy during whole-brain radiotherapy (HA-WBRT) using intensity-modulated radiation therapy (IMRT) can be considered as a way to preserve memory. This issue was assessed in phase II of the randomized trial, without Memantine. After 6 months, better Hopkins Verbal Learning Test-Revised (HVLT-R) indexes were achieved in HA-WBRT in comparison with the conventional WBRT (18). The next trial of HA-WBRT was a phase III trial of NRG Oncology CC001 with Memantine published in 2020. In this trial, patients with brain metastasis outside of 5 mm margin around the hippocampus with KPS > 70 from all age groups were included. Before WBRT, the patients with leptomeningeal spread or hydrocephalus were excluded. The patients received WBRT + Memantine or HA-WBRT + Memantine. Cognitive failure risk was significantly better in the Memantine + HA-WBRT arm; however, it is not compared with placebo but demonstrated additive effects of hippocampus avoidance on memantine effect. The patients’ median survival was 7.9 months, and only 41% of the patients completed cognitive tests for 4 months. So, most of the patients did not attain any benefit from Memantine because of low median survival. It could be reasonable to forego hippocampus avoidance in patients expected to survive less than 4 months. On the other hand, based on the need for planning IMRT for HA-WBRT by the oncologist, it was impossible to randomize the patients. In this trial, the patients with ages more than 70 years were included, affecting the final cognitive parameters. The treatment-related grade 3 - 4 toxicity was not different between the 2 arms (12).

Corticosteroids are usually used to improve brain edema symptoms during WBRT, which can induce cognitive dysfunction. Memantine was administered for 8 weeks to prevent cognitive failure of long-term consumption of corticosteroids in a randomized trial. The total and delayed recalls were significantly better in the memantine arm; however, the number of studies was small (19).

Despite the proven effects of Memantine in the clinical phase of 3 trials, based on a SEER-Medicine database review, only 2.20 % of 6220 patients treated with WBRT for brain metastasis have received Memantine (20). During primary brain tumor radiotherapy, memory usage has been studied; the results have been recently published that can be considered a starting point for future studies (21).

Based on the available results about the better cognition function and no increase in complications by using Memantine during WBRT, it is reasonable to consider Memantine during radiation to prevent long-term cognitive failure in patients with recently increased life expectancy.

Ongoing trials to evaluate memantine effects during SRS or in pediatric brain radiotherapies will provide more information on the effectiveness of Memantine in cognitive preservation in patients with cancer.