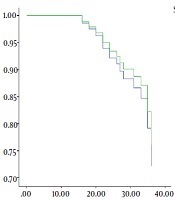 Breast cancer is the most common cancer among Iranian women. The treatment of locally advanced breast cancer (LABC) is an important issue in ongoing studies. There is controversy about the ideal treatment in available studies.

We aimed at comparing the local recurrence rate and disease-free survival in patients with LABC in breast-conserving therapy (BCT) and modified radical mastectomy (MRM) groups after neoadjuvant chemotherapy.

In this cohort, we analyzed the data of patients with LABC referred to the cancer research center of Shohada-E-Tajrish Hospital. Patients were categorized into two groups of BCT and MRM. Different parameters were recorded and compared between the two groups. Endpoint outcome measures were defined as survival rate and local recurrence rate.

Generally, 115 patients with an average age of 48.23 years in BCT and 48.76 years in the MRM group were included. Hormone consumption history showed a significant difference between the two surgery groups (P = 0.032). Twenty-one patients (18.26%) showed local recurrence. The disease-free survival rate did not differ between the two surgery groups (P = 0.250). The association of survival was only significant with cigarette smoking (P = 0.041).

BCT after neoadjuvant chemotherapy showed an identical disease-free survival rate compared to MRM and did not show lower survival or higher recurrence rate in comparison to radical mastectomy.

Locally advanced breast cancer (LABC) is a subset of breast cancer characterized by the most advanced breast tumors in the absence of distant metastasis. To be more precise, recent guidelines of U.S. National Comprehensive Cancer Network have described LABC as fulfilling any of the following criteria without the presence of distant metastasis (8): tumors more than 5 cm in size with regional lymphadenopathy (N1-3), tumors of any size with direct extension to the chest wall or skin, or both (including ulcer or satellite nodules) regardless of regional lymphadenopathy, the presence of regional lymphadenopathy (clinically fixed or matted axillary lymph nodes, or any of infraclavicular, supraclavicular, or internal mammary lymphadenopathy) regardless of tumor stage.

Today, LABC is managed with a combination of surgery, radiation therapy, and chemotherapy. The treatment sequence usually starts with neoadjuvant chemotherapy to shrink the tumors in the breast and lymph nodes, thereby facilitating performing surgery with better outcomes. The surgery type in LABC is usually modified radical mastectomy (MRM), but an increasing rate of patients request breast-conserving therapy (BCT) due to various reasons, mainly cosmetic issues, which of course plays an important role in the quality of life maintenance in patients (9).

In this study, we aimed at comparing the outcomes of MRM and BCT regarding local recurrence rate and disease-free survival in patients with LABC after neoadjuvant chemotherapy.

In the present study, patients with LABC previously undergoing neoadjuvant chemotherapy referred to the cancer research center of Shohada-E-Tajrish Hospital (Tehran, Iran) between 2013 and 2015 were included. All patients referred to our clinic were included to evaluate the inclusion and exclusion criteria. Patients with: (1) tumor size more than 5 cm, (2) 4 or more involved lymph nodes (N2, N3) and (3) stage III were included in the study and categorized into the BCT and MRM groups. Family history, age, tumor markers, oncogenes, tumor suppressor genes, and 1- to 5-year survival were recorded. The exclusion criteria included the presence of distant metastasis, the multifocal lesion in one breast, extensive microcalcification in the breast, and huge tumor size in comparison to breast size, which makes breast-conserving surgery non-feasible, the presence of chemoradiotherapy and hormone therapy contraindications, and considerable skin changes.

Data confidentiality was respected through the study. No individual report was published. Patients’ treatment did not alter due to sole research purposes. No additional charge was applied to patients. Prior to enrollment, written informed consent was obtained from all subjects and Shahid Beheshti University of Medical Sciences board of ethics approved the protocol of the study. All procedures regarding human subjects were in accordance with Helsinki Declaration guidelines.

Statistical analyses were performed, using SPSS version 19.0 for Windows (IBM Corporation, New York, United States). Continuous variables are presented as mean ± standard error of mean and categorical variables as proportions. Baseline variables between BCT and MRM groups of the trial were compared, using independent t test or chi-square. The comparison of disease-free survival across the two treatment groups was based on Kaplan-Meyer estimates, and P values were calculated from non-parametric log-rank tests. To account for potential confounders, analyses of crude log-rank tests were corroborated with Cox regression models accounting for the following predefined potentially confounding variables. In all tests, a P value of less than 0.05 was considered necessary to discard the null hypothesis.

Hormone receptors’ status was not significantly different between the two groups. The details are seen in Table 2.

Hormone receptors’ status in two recurrence and non-recurrence groups are shown in Table 3. Comparison of overall survival in BCT and MRM groups

In the Nold et al.’s study (13), 55% of patients had chosen the MRM method and the majority of them said that fear of recurrence is the reason for their choice. In the Lam et al.’s study (14), MRM patients mentioned longer survival, lower recurrence, and no need for retreatment.

Touboul et al. (15, 16) have evaluated the recurrence rates of both methods in two consecutive years and reported a 16% to 20% recurrence rate for BCT and a 5.4% to 6% recurrence rate for MRM. This difference did not reach statistical significance. The majority of available reports reveal similar findings except for Lerouge et al.’s study (17) reporting 4% and 23% recurrence rates in MRM and BCT groups, respectively, which was significantly different. The survival rate did not differ between the two groups in that study.

The disease-free survival rate was not significantly different between the two groups in our study (P = 0.250). NSABP-B18 (18) has reported a higher local recurrence rate in BCT compared to MRM, but after adjustment for age and tumor size, this significant difference was resolved. Ishitobi et al. (19) could not reveal any significant difference in recurrence-free survival according to surgery type after neoadjuvant chemotherapy. Halverson et al. (20) also emphasized that 5-year survival was 95% to 100% either in BCT or MRM regardless of age, grade, or lymph nodes’ status. A systematic review in 2016 (21) has reported that 5-year survival was lower in the mastectomy group, but this difference was not statistically significant. Vergine et al. (22) also declared that undergoing neoadjuvant chemotherapy can make BCT as successful as MRM. Contrarily, Shenkier et al. (23) have reported that standard surgery treatment in LABC is MRM and performing BCT is not allowed. Heil et al. (24) have also opposed the recruitment of BCT as standard surgery in LABC cases.

The aim of the present study was to evaluate disease-free survival rates after surgery between BCT and MRM groups. Surgery type after neoadjuvant chemotherapy in patients with LABC cannot alter disease-free survival duration and recurrence rate. The role of HER2 and p53 receptors were significant in recurrence, which should be investigated in future studies. BCT in patients with LABC after neoadjuvant chemotherapy is allowed according to our findings and patients can benefit from its advantages in comparison to MRM.

This study was funded by Shahid Beheshti University of Medical Sciences.