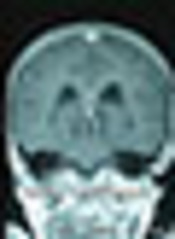 Low Back Pain and Paraplegia as Initial Clinical Presenting of Medulloblastoma: A Case Report

Medulloblastoma is one of the most common malignancies in children. Common clinical symptoms of patients are related to the symptoms due to tumor in the posterior cranial fossa. Presentation of patients with symptoms related to metastatic tumors in the spinal canal are unusual.

We present a 6-year-old child with symptoms of lower back pain and Paraplegia as early symptoms of medulloblastom. The Magnetic Resonance Image (MRI) of spinal cord revealed multiple tumors in the spinal canal (initially diagnosed). A biopsy of the tumor was also performed. Then, whole CNS (Central Nervous System) imaging revealed tumor in the posterior cranial fossa. He had a dramatic improvement after treatment and returned to normal in all clinical signs. Four years have passed from his treatment and he is symptom free.

Presentation of Medulloblastoma with widespread spinal canal drop metastases is rare. However, spinal drop metastasis should be considered to prevent a suboptimal management in child. These patients did not consider in aspect of the treatment outcome as hopeless.

Medulloblastoma, a tumor in the primary neuroectodermal of the cerebellum, typically originates from the vermis. This tumor is the third most common tumor of the central nervous system (CNS), after meningiomas and glioblastoma (1). The most common position of this tumor is the posterior cranial fossa. This tumor contains about 21.8% all primary malignant tumors of the nervous system in Iran (2). Medulloblastoma as a primary tumor of cerebellum includes about 20% of pediatric tumors and 1% of adult brain tumors (2). Due to advances in surgery, chemotherapy and radiotherapy, the prognosis of medulloblastoma has dramatically changed in the last 20 years. The disease-free survival of patients is approximately 10 years in the absence of spinal metastases (2). The most common sites of systemic metastasis are bone, peritoneum, liver and lung but the overall systemic metastasis rarely occurs in a small number of patients and it has rarely been reported medulloblastoma with metastases in the spinal cord (2). In the recent years, the survival rate of children with medulloblastoma show better results. This improvement is due to factors such as early diagnosis, better surgical technique, radiotherapy technique of all CNS and using active agents in radiotherapy. At present, the medulloblastoma divided into two categories: average risk and high-risk. In average risk, non-metastatic patients (M0) have no remaining or less than a 1.5 centimeter after surgery. We report such a case that patient’s symptoms were resolved after treatment.

A 6-year-old boy was referred to the hospital that had complaint of back pain. His symptoms did not improve with symptomatic therapy. Patient’s pain started about 2 weeks before. Patient was under the initial work up because of lack of response to therapy and severe pain. Routine tests such as (blood urea nitrogen) BUN, (creatinine) Cr, (Sodium) Na, (Potassium) K, (complete blood count) CBC were normal. Child and his family had no past medical history. Child was fully conscious and his cranial nerves were also normal, but he was with urinary and fecal incontinence and paraplegia in both lower extremities. On examination, the force of upper extremity was 5 but lower extremities force both sides was zero. Deep tendon reflexes were absent in both legs. Sensory loss below the level of T10. Sensation was normal in both arms. There was a local pain in lower lumbar but there was not a point of tenderness in examination. There were high signal spinal lesions in spinal cord (Magnetic Resonance Image) MRI (9/1/2012) with multi-focal lobular mass within the canal that represents the metastatic seeding (Figure 1). In brain MRI and thoracic cord MRI was observed a lesion with an enhancement to the posterior part of fourth ventricle and widespread seeding to the cervical and thoracic spinal cord (Figure 2). Patient with probable diagnosis of spinal tumor was undergone biopsy. He was referred to the oncology service after a biopsy for further treatment. In pathology report (21/1/2012) an extra modularly spinal cord mass with extensive proliferation and solid bundles, small cells with hyperchromatic nuclei without cytoplasm and a low mitosis in the vascular stroma and many artifacts without differentiation and in macroscopic view an irregular piece of tissue (2 cm3volume) with elastic consistency was found. Biopsy confirmed the prior diagnostic of immunohistochemistry (IHC) that was (leukocyte common antigen) LCA (-), (cytokeratin) CK (-), myogenin (-), (cluster designation) CD99 (+) and final diagnosis was malignant small blue cell tumor consistent with medoulublastoma. Patient with proved diagnosis of medulloblastoma was undergone craniospinal radiotherapy by fraction of 1.6 (Gray) Gy. After 36 GY, we localized field to boost posterior fossa and regions of drop metastases in spinal canal for a total dose of 45 Gy and 54 Gy, respectively. After radiotherapy (RT), MRI showed a small remaining of tumor in posterior cranial fossa and the cervical and lumbar cords that represents an excellent response to the radiation treatment. Patient received 15 cycles of chemotherapy with carboplatin + cyclophosphamide regimen after cranio-spinal RT. Motor status of patient improved gradually after CSI (craniospinal irradition) and initiation of chemotherapy. He could barely walk after chemotherapy. MRI of spinal cord showed metastatic lesions with enhanced contrast agent in spinal cord after chemotherapy. Brain MRI showed small lesions in the cerebellum that represents a dramatic response compared to the primary MRI.

Patient returned to the normal activities. In spite of the fact that there was evidence of spinal nodular residues in MRI, there are no clinical symptoms. It passes about 4 years of treatment and he is symptom free. (Informed consent form was taken from the patient’s guardians to report the disease of child)

Drop metastasis from medulloblastoma in the posterior cranial fossa spread into the spinal canal as a potential method of spread disease in the CNS. Drop seeding has been reported in 40% of cases by CSF (cerebrospinal fluid) cytology and MRI of whole brain and spinal cord. The lumbar spine has more involvement due to gravity. Although, the major metastases of tumor are intradural extramedullary, intramedullary metastases have also been reported (3). It has been found that presence of leptomeningeal metastases is an adverse factor for prognosis.

This patient is unique because of widespread metastases in the spinal cord and despite the nodular metastases, had a dramatic response to treatment and the patient returned to the normal activities. In spite of the fact that there was evidence of spinal nodular residues in MRI, there are no clinical symptoms. Four years have passed from his treatment but he is symptom free. This shows that it is not necessary to continue treatment if there is tumor remaining in MRI (4). Presentation by paraplegia is rare, but there are some reports in the literature that patients presented with this symptom. In 1986, Wang and colleagues was presented a case that referred with a progressive motor weakness and it found that patient had medulloblastoma (5). In 2000, Lee and colleagues from China introduced a patient with acute paraplegia (6). In 1988, Stanley, et al. reported 34 patients with medulloblastomas. Fifteen patients had spinal seeding in MRI, but only one patient complained motor weakness in lower extremities (7). There is a little data about the outcome of these patients after treatment. In 2012, Fasial Al-Otaibi of Saudi Arabia reported a case with cauda equina syndrome that treated with a whole CNS4 radiotherapy and chemotherapy with Cisplatin - Lomustine (CCNU) - Vincristine (VCR) regimen. MRI was normal one year after treatment and there was no evidence of recurrence of the disease based on patient’s self-report (8). Meyeres SP compared CSF analysis and MRI finding in patients with medulloblastoma. CSF cytologic finding was positive in 13 patients with suspicious of involvement leptomening and 5-year survival was also 24% (9).

Presentation of Medulloblastoma with widespread spinal canal drop metastases is rare. We recommend the long term control intent of treatment for these patients.