Breast cancer is the first leading cause of cancer-related deaths in women. Ki-67 is being used for evaluation of the prognosis of patients with breast cancer.

The aim of the current study was to explore the association of the involvement of axillary lymph nodes status with the expression of Ki-67 in patients with breast cancer.

A total of 449 patients were enrolled followed by evaluation of the association of Ki67 levels with demographic, pathologic, and survival data of patients, using Chi-square, logistic regression models, student t test and Mann-Whitney.

The results of this study demonstrated that the overexpression of Ki-67 was associated with large tumors, progesterone receptor expression, and stage of tumor, but it was not related with lymph node involvement.

The expression of the biomarkers in breast cancer is important to identify prognosis. For example, the expression of human epidermal growth factor receptor 2 (HER2), as a member of the epidermal growth factor receptor family, would occur in 20% to 30% of breast cancer tumors (8). As a biomarker protein, Ki-67 is another cellular marker for proliferation and it is associated with the carcinomas of the prostate, brain and the breast, and nephroblastoma, which is known as one of the most powerful indicators of tumor behavior and a useful tool in determining the aggressiveness of malignant neoplasm in several studies (9-12).

The Ki-67 has roles, including ribosomal RNA transcription and inactivation of Ki-67, which leads to the inhibition of ribosomal RNA synthesis (13). High rate of proliferation of Ki-67 is considered to cell growth fraction and it predicts poor survival in prostate cancer, myeloma, breast cancer, and aggressive tumors (14, 15). In about 40% of patients with breast cancer, the malignancy is growing and spreading regionally to one axillary node, at least. In primary breast tumors, high level of Ki-67 expression is significantly related with the primary tumor stage (16).

In this retrospective study, we assessed case files of 2 723 female patients with breast cancer, who were referred to radiotherapy and oncology centers of Mashhad University of Medical Sciences from 2002 to 2012 (Convenient Sampling). This project has been approved by the Ethics Committee of Mashhad University of Medical Sciences (Ethical Code: IR.MUMS.REC.1391.706). The inclusion criterion was non-metastatic breast cancer and the exclusion criteria were as follow: 1) T4 stage; 2) metastatic disease at diagnosis; 3) incomplete medical records; and 4) lack of access to patients’ information. We also excluded patients presenting with metastasis.

By considering the minimum power of 80% for Chi-squared test, the significance level and the effect size were obtained 5% and 0.2669, respectively. The sample size was considered 449 by NCSS & PASS software. According to the objectives and research questions, all obtained information was analyzed, using SPSS 11 after initial processing. All research variables were described by descriptive statistics methods, including frequency and agreement tables, diagrams of frequency distributions, and bar charts; statistical indicators were described. We used Chi-two, logistic regression analysis, t student for independent two groups or its equivalent, while Mann-Whitney was used for the nonparametric parameters. To assess the normality of quantitative data, the Kolmogorov–Smirnov was used.

Table 3. Evaluation of Effect of Studied Variables on Survival (Kaplan-Mayer) 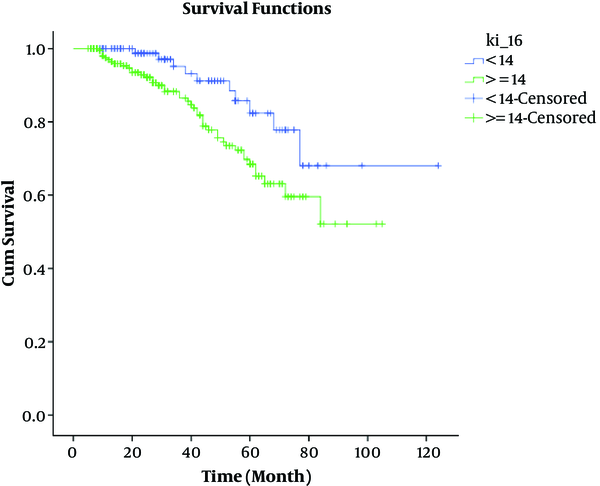 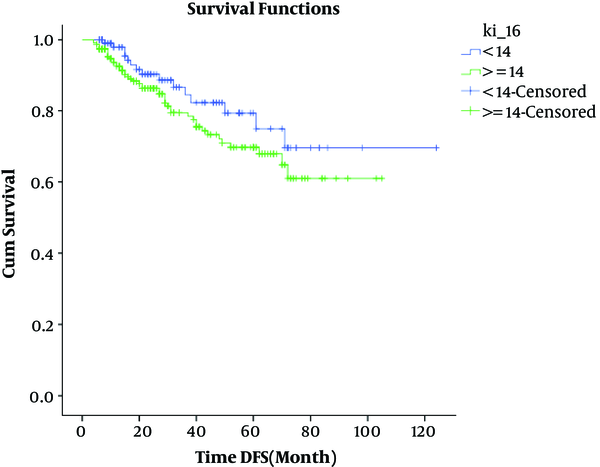 Figure 2. Association of Ki67 with DFS

The Ki-67 is a monoclonal anti-body and its expression is reported in proliferating cells during the active phase of the cell cycle (G1, S, and G2). Several studies have suggested its role as a prognostic biomarker (17). It has been shown that Ki-67 might be related with axillary lymph node status in primary breast tumors. It is reported to be associated with progesterone and estrogen receptor status (18, 19). The current study showed a significant difference between PR with Ki-67 expression. Also, the findings showed an association between Her2 and gene expression of Ki-67, which is in line the data by Suthipintawong et al. (20).

Nishimura et al. (21) studied the Ki-67 as a prognostic marker according to the breast cancer subtype and a predictor of recurrence time in primary breast cancer. They concluded that it is important to consider the Ki-67 in the treatment and follow-up of patients with breast cancer. In their study, the relation of invasive lobular carcinoma was higher than other types of carcinoma types. Also, the follow-up of patients by Kaplan-Mayer assessed the studied variables on survival analysis. The results of this research showed a significant association for Ki-67, age, stage of tumor, and the Her2/neu status.

In conclusion, we evaluated ALN involvement in breast cancer patients. We showed that high Ki-67 expression was associated with the age, large tumors, progesterone, and stage of tumor; however, it was related with lymph node involvement. The Ki-67 detection represents a valuable and prognostic tool that should be analyzed further in combination with other clinical, pathologic, and biologic parameters in breast cancer treatment.