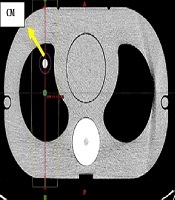 Despite the benefits of contrast-enhanced computed tomography (CT) scans in better tumor volume delineation, it can affect the accuracy of dose calculation in radiation therapy. This study examined this effect on a thorax phantom.

The influence of different variables including the concentrations of the Visipaque contrast media, tumor sizes, and CT scan energies on the dose measurement was examined.

The correlation between concentration and the percentage of mean dose of the tumor volume was significant in 2 of the tumor sizes. The differences in the mean doses of the 2 plans were examined and more than 3% increase was observed in higher concentrations of the contrast media.

According to this study, the suitable concentration of the contrast media administered and the CT scan energy should be considered. This would help to decrease the discrepancies between the calculated and delivered dose in radiotherapy treatments to a clinically acceptable level. The importance of time delays for CT scans after administration of the contrast media is emphasized.

Lung neoplasms are the second most common cancer in both men and women and the leading cause of cancer death worldwide (1). Radiotherapy is one of the standard treatments for non-operable stages of lung neoplasms therapy and its accurate delivery is essential (2).

Due to the breathing movements of the thorax, a larger area is added to the Gross tumor volume (GTV), therefore accurate tumor volume delineation is important to decrease lung toxicity (3). Contrast-enhanced computed tomography (CT) scans can improve accurate delineation of the GTV and lymph nodes by distinguishing it from vascular structures. The thorax is a preferential site for examining the effect of contrast media due to it’s numerous and large vascular structures (4). It is one of the 8 recommended tumor sites for administration of intravascular contrast as recommended by the Royal College of Radiologists (RCR) (5).

Despite all the benefits, based on contrast enhanced CT scans, the calculated dose in the treatment planning process might vary from the actual delivered dose because of the absent of the high-density contrast media during the radiotherapy treatment (4, 6). The fusion of 2 sets of CT scans, enhanced one for delineation and the non-enhanced one for treatment planning and monitor unit calculation might not be feasible because of the breathing motions of this region ((7, 8). Furthermore Dual scanning if not necessary is preferred to be minimized according to as low as reasonably achievable (ALARA) principle (9).

Different investigations have been carried out on the effect of contrast media on the calculated dose of radiotherapy. Ramm et al. (10) examined this effect in a water phantom and found an increase in the calculated monitor unit (MU) depending on the concentration of the contrast media and the number of treatment fields. Robar et al. (11) found that the level of dose enhancement is related to the megavoltage energy used in radiotherapy. liauw et al. (6) found no significant variation in dose calculation for the head and neck region. Other investigations were also conducted on different anatomical regions and different techniques of radiotherapy and some of the results showed that the level of variations in the calculated dose was dependant on these factors (7, 12-14).

The present study was performed on a thorax phantom to examine 4 variables, the first was the different concentrations of the visipaque contrast media to see which concentrations of the contrast media would lead to clinically acceptable changes in the calculated dose. The second was the effect of tumor size on the level of dose enhancement. The third was the probable difference in calculated dose variations at the time the contrast media is present in large vessels or is absorbed in the capillaries. The last was the influence of the CT scan energy and the impact that could have on the calculated dose in treatment planning.

The phantom used in this study was made up of similar electron density materials to the actual structures of the human thorax (15). Including cork with a Hounsfield unit in the range of -774 to -841 HUs representing the Lungs, plexiglass of 80 to 171 HUs as the soft tissues, and finally a dense fiber (phenolic resin cotton fiber rod) with the HU between 565 and 717 HUs instead of the vertebral bones. It is worth mentioning that the range of HUs presented above are obtained from our treatment planning system (TPS) software. The dimension of this phantom was based on intensity-modulated radiotherapy (IMRT) thorax phantoms (Figure 1). 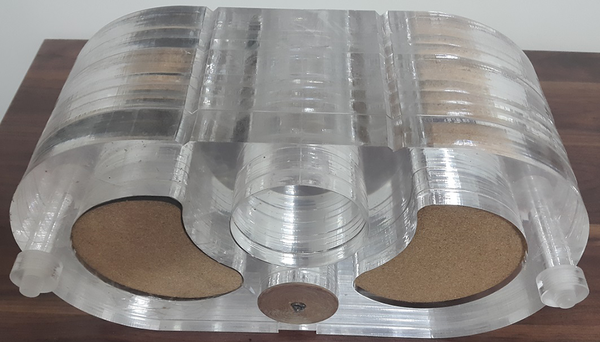 Figure 1. The thorax phantom used in this study

The contrast media used in this study was visipaque (iodixanol) containing 320 mgI/mL in a 50 ml vial, manufactured by GE healthcare, Ireland (16). Five different concentrations of Visipaque were used by diluting it in 5 steps in normal saline solution simulating the dilution of contrast media in blood flowing through the vessels.

In order to demonstrate the uptake of contrast media by the capillaries after a complete blood circulation, the cork slices were soaked in a tank of visipaque with a concentration of 1/48 of the initial concentration.

The phantom was scanned in the 16-slice SOMATOM Emotion, Siemens CT scanner with 3 different CT scan energies of 80, 110, and 130 kVp. The exposure time was 600 ms and slice thickness was 5mm. Different series of contrast-enhanced CT scans were acquired by changing the cylinders containing different concentrations and no contrast CT scans were acquired for the 3 different kilo voltages.

The CT scans were imported to the Eclipse V13.1 software manufactured by Varian Medical System for the Clinac 600c-6x linear accelerator. Eclipse is a comprehensive treatment planning system, which facilitated the treatment planning and optimization of this study through its anisotropic analytical algorithm (AAA) photon dose calculation model. This model is a 3D pencil beam convolution-superposition algorithm, which provides a fast and accurate dose calculation for clinical photon beams even in complex tissue heterogeneities like lungs (17).

Three sizes of tumors representing different stages of the disease were delineated (Figure 2) near the mediastinum on contrast-enhanced with different concentrations and non-enhanced CT scans. 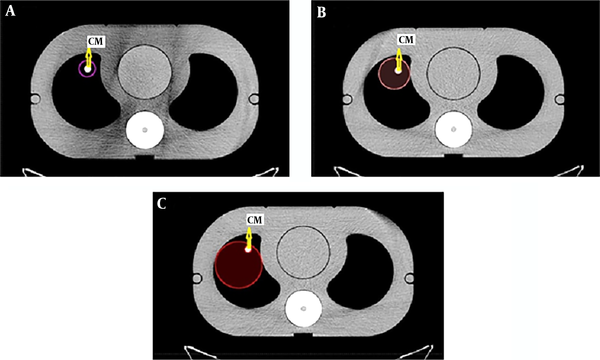 Figure 2. The transversal view of the position of the tumors and the Visipaque contrast media (CM) within each tumor, A, representing the 2.5 cm GTV (purple); B the 5 cm GTV (pink); and C, the 7.5 cm GTV (red) of tumors contours. 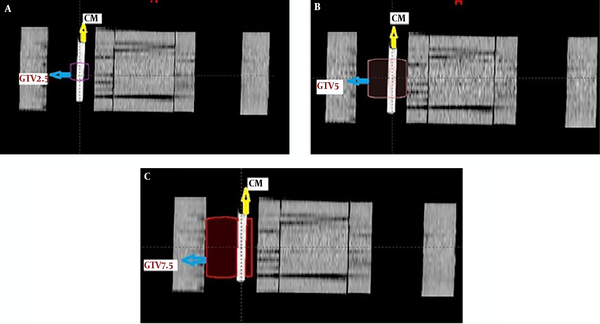 Figure 3. The frontal view showing the contrast media cylinder (CM) within each tumor A, showing contours of the 2.5 cm GTV; B, the 5 cm GTV; and C, the 7.5 cm GTV.

The treatment planning was performed on the CT scans using 2 opposing fields, anterior-posterior and posterior-anterior with equal beam weights. The energy used was 6 MV photon beams and the reference point with 100% of the daily dose of 2 Gy was adjusted on the isocenter of the 2 fields.

The monitor units (MUs) of each field, the mean dose of the GTV, and the line dose profile for the contrast and no contrast plans were calculated through the anisotropic analytical algorithm V13.0.26 with the calculation grid size of 0.25 cm. For each CT scan energy, a specific CT calibration table was used for CT number to density conversion.

The analysis of the data obtained from this study was performed by the Pearson correlation test in order to find the probable correlation through the SPSS 16 software. 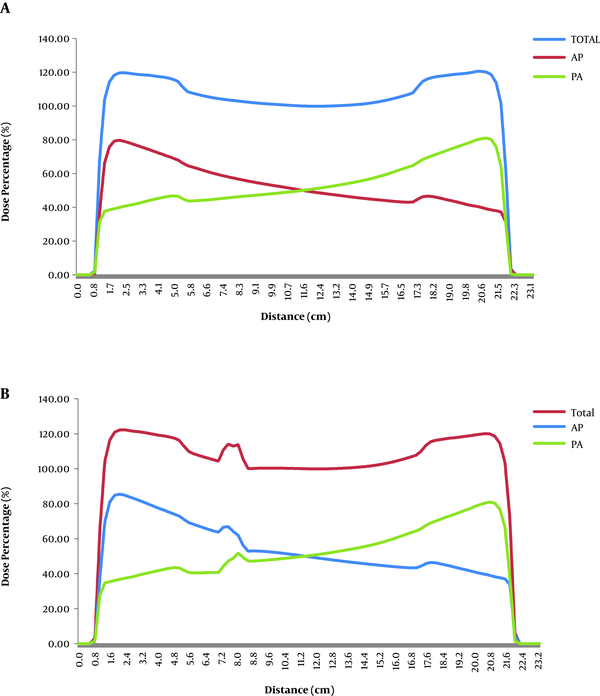 Figure 4. A, The dose line profile of the non-contrast plan; and B, the contrast plan. AP stands for Anterior-Posterior field and PA for the posterior-Anterior field. 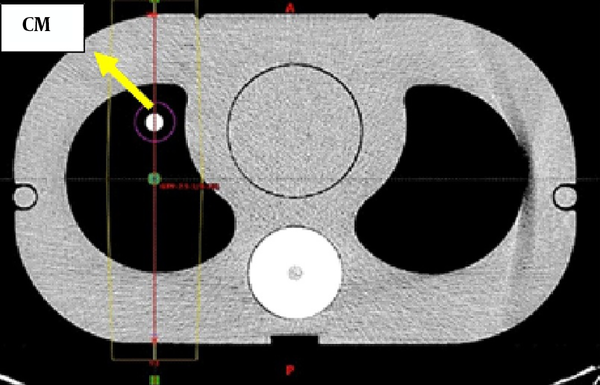 Figure 5. The CT scan of the phantom with the red midline passing through the green reference point (isocenter) and the contrast media (CM) in the contrast plan.

The Pearson correlation test was made to acquire the Pearson coefficients and to test the significance of the correlation between the GTV mean dose and concentration of the contrast media. Two variables of tumor size and CT scan energies were considered (Table 1).

Table 1. The Results of the Pearson Correlation Test Between Concentration and the Mean Dose in Different Energies and Tumors Sizea

bUsed when the P-value < 0.05, which means the correlation is significant at the 0.05 level.

According to Table 1, in most of the cases except for the tumor size of 7.5 cm, the correlation was significant at the 0.05 level (18). 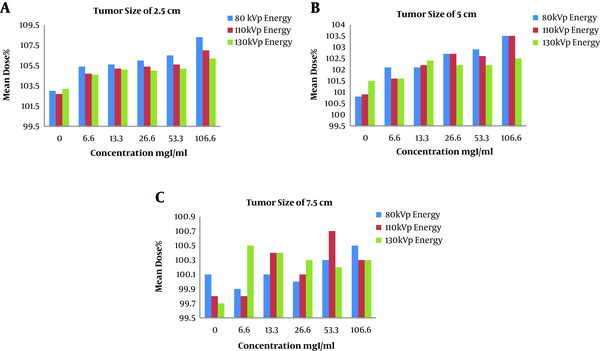 Figure 6. The variations of the mean dose in different concentrations, by changing the CT scan energies in constant tumor sizes: A, 2.5 cm; B, 5 cm; C, 7.5 cm. 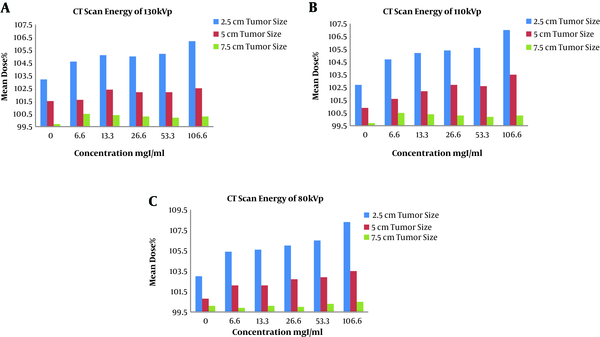 Figure 7. The variations of the mean dose in different concentrations, by changing the tumor sizes in constant CT scan energies: A, 130 kVp; B, 110 kVp; C, 80 kVp.

Table 2. The dose differences between the contrasts enhanced and non-enhanced plans in different tumor sizes and different CT scan energies

bThe dose difference is greater than 3%.

Abbreviation: T, of the tumor size.

In the treatment planning process of radiotherapy, contrast media may be administered in CT scanning in order to assist for accurate tumor and organ at risk delineation. However, the absence of the contrast media during the treatment might affect the accuracy of dose calculations. This effect was examined in this study.

International Commission on Radiation Units and Measurements (ICRU) recommends that the delivered dose should not deviate from the prescribed dose. Due to various probable uncertainties in dose delivery to patients, more than 3% accuracy is required in each step (19). Therefore, we considered 3% and above as a significant clinical dose discrepancy in dose calculations. According to the results, differences between the mean doses of the contrast-enhanced plans and non-enhanced plans showed an increase in the calculated dose of the contrast plans. However, the differences were only clinically significant at high concentrations of the visipaque contrast media (1/3 of the initial concentration) in the CT scan energy of 130 and 110 kVp. With decreasing CT scan energy (80 kV energy), the mean dose differences raised to a maximum 0f 5.3%, which is higher than the overall dose delivery uncertainties accepted by the ICRU. Even 1/12 of the concentration shows clinically significant differences. The different result in dose calculation for different energies is related to the predominance of the photoelectric effect at 80 kVp energy.

As mentioned, the dose differences were found to be statistically significant but in most cases were clinically acceptable, this finding is in line with the study conducted by Xiao et al. (7) In another study by Lees et al. (4) no clinically significant differences were reported, and in a study by Kimlin et al. (8) the results were also considered negligible. The minimal impact of the presence of contrast media on dose calculation was observed in some studies which were depended on the tumor sites and the number of treatment fields, as it was predicted by Ramm et al. (10), especially in the head and neck cancers because of small blood vessels and treatments with high numbers of fields such as IMRT technique (12, 14, 20).

The increase in tumor size shows fewer discrepancies between the mean doses of the contrast-enhanced plans and the no contrast ones. The ratio of the volume of contrast media over the volume of the GTV for the tumor size of 2.5 cm was 0.244, for the 5 cm tumor size was 0.045, and for the 7.5 cm diameter of the tumor was 0.02. As we know, the mean dose is the average dose of the calculation grids defined in a volume. As the tumor size grows, the volume with a high density compared to the normal density of the lungs, decreases and the average dose consequently decreases.

According to the findings of this study, increasing the concentration of the contrast media and decreasing the CT scan energy would result in an increase in the calculated dose and MU by the TPS. We concluded that the suitable concentration of the contrast media administered and the CT scan energy should be considered. This would help to decrease the discrepancies between the calculated and delivered doses in radiotherapy treatments to a clinically acceptable level.