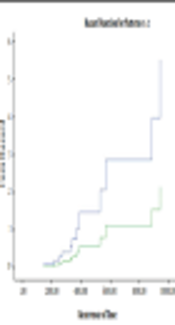 Around 80% of the all non-melanoma skin cancer cases suffer from basal cell carcinoma (BCC). Mohs surgery is one of the common method used for treatment in recent years. There are several treatment methods for primary BCC. One of these methods is Mohs micrographic surgery (Mohs surgery), which has become popular in recent years.

The aim of this study was to investigate 4-year recurrence and factors affecting the recurrence of BCC patients after Mohs surgery.

This is a retrospective cohort study. The study population included all BCCs, who underwent Mohs surgery in Alzarha Hospital in Isfahan between 2007 and 2014, and were monitored for recurrence for 4 years. Cox regression analysis was used to determine factors affecting time recurrence.

The most and least frequent locations of this disease are nose (30.3%) and body (0.5%). The most common locations for recurrence are scalp (50%), nose (15%), and around the eyes (15%). The 4-year recurrence frequency of BCC after Mohs surgery was 0.9%. Cox regression analysis relationship between determining factors affecting time recurrence was not significance.

The causes of recurrence can include the less use of protective equipment in front of sunlight or low precision of doctors in the lesion surgery in locations of the body, arms, feet, head, neck, hands, legs or genital organs, and other parts of the body.

Around 80% of all non-melanoma skin cancer cases suffer from basal cell carcinoma (BCC) (1). In the United States, 3.5 million cases of non-melanoma skin cancer are reported every year, 80% of whom are BCC (2-4). In 2004, the incidence of BCC in Iran was 7.5 cases per 100,000 persons (5). BCC tends to appear on the parts of the skin that have direct contact with sun such as face, scalp, neck, and arms, which are highly visible and can cause severe deformities in advanced cases of BCC (6). There are several treatment methods for primary BCC. One of these methods is Mohs micrographic surgery (Mohs surgery), which has become popular in recent years.

The aim of this study was to investigate the costs, 4-year recurrence, and factors affecting it in BCC patients undergoing Mohs surgery.

This is a retrospective cohort study. The study population included all BCC patients undergoing Mohs surgery in Alzarha Hospital in Isfahan between 2007 and 2014, all of whom were followed-up for 4 years after the surgery for the relapse of the disease. The collection of data from 2007 to 2010, that is, patients who were admitted to study in 2007, those who were followed-up to 2011, and those who entered the study in 2010, were tracked by 2014.

Considering that Mohs surgery in Isfahan Province is performed only in the one clinic, if the disease recurs, the person will return to the same clinic. Otherwise, we can assume that they were cured because the morality of disease is nearly zero. The follow-up time was considered by reviewing the patient hospital records, as well as telephone contacts with the patients, who had not visited the clinic for re-examination.

Hospital records, direct phone calls to patients if applicable, data regarding recurrence of BCC, and its related direct costs were collected. All BCC patients visiting the hospital in this period were recruited. It should be noted that the relevant information was considered for each patient and the unit of the measurement of relapse has been based on the day.

Patients with cancer on previous scar tissue or recurred cases of disease as well as patients for whom it was not possible to investigate the possible recurrence due to death or any other reason, were excluded from the study. Considering that the study was a retrospective cohort type, initial data were extracted from the patient hospital records. The records were incomplete and, unfortunately, the information of variables such as stage and grade of disease was not available. But, as the majority of the patients were in the stage of Mohs surgery 1 and 2, we could assume that these two variables were not varied between the patients. The cases that could not be followed were excluded (8.6%). In total, 211 lesions from 198 patients were included in the study.

After the pathological confirmation of BCC, all patients underwent Mohs surgery by dermatologist surgeon. Using color coding of the edges of the lesion, the tumor is removed layer by layer. In the first stage of Mohs surgery, a bowl-shaped sample was processed, using frozen section method and, then, were pathologically tested. In the second stage, the process would be carried out if any signs of cancer were found. This method continued until the entire area was free of cancer cells. In other words, this method tested 100% of the edges of the surgery area and facilitated more accurate mapping of the tumor (7) and reduced the amount of healthy tissue removed during the process (8). After the complete removal of the tumor, the scar was treated, using secondary treatments such as stitches, local skin flap, or a skin graft.

The demographic information (gender, age, residency, and workplace) of the patients, location and size of the lesion, number of Mohs stages, and tumor recurrence were extracted from patients’ files. In cases, where the file was incomplete, the necessary information was obtained through phone calls. It is worth mentioning that cases, in whom tumor appears 3 months or more after the surgery, were considered recurrences otherwise were not.

In this study, direct payments were calculated and indirect costs were not measured. Costs are extracted from the patient accounting records. The cost information is about the costs of before, during, and after surgery, including visit a doctor before and after surgery, pathology, operating room, gloves, blade bistoury, sample glass, dressing, mupirocin ointment, insulin syringe, carpool, dental needle, normal saline, nylon thread, vikril yarn, dermatome blade, shaver blade, bandage, cephalexin, vaseline gas, and helin cream.

All cost unites from the diagnosis time to the end of the 4-year follow-up period were extracted from the patients’ files and hospital records. Then, using the service tariffs of the Ministry of Health in 2015, all costs were converted to US dollar with the exchange rate of 1$ = 29980 Rials.

Table 1. Cox Regression Analysis of Factors Affecting Time to Recurrence for BCC Patients with Mohs Surgery in Isfahan, Iran (2007 - 2014)a

Graph of hazard function of factors affecting time to recurrence for BCC patients with Mohs surgery in Isfahan, Iran (2007 - 2014)

The information regarding the cost of treatment based on demographic factors and lesion types is shown in Table 2. The costs from the highest to the lowest include surgery and related medicines, visiting the doctor and after surgery medicines, recovery, and pathology costs, respectively. Among the factors mentioned in Table 2, the only significant relationship is between lesion size and treatment costs; this means that the cost of treatment for lesions smaller than 2 cm was higher than for lesion equal to or bigger than 2 cm.

Previous results indicate that lesions between 1 cm to 3 cm had a higher recurrence rate than those of > 3 cm (14); but, the result of this study showed that the highest recurrence rate was in lesions smaller than 2 cm. This can be due to the different accuracy of surgeons performing Mohs surgery. Also, Mohs surgery is a more suitable treatment method for larger lesions due to lower recurrence rate. Some studies report that the rate of recurrence in BCC is related to factors such as larger lesion size, location of the lesion in face area, and invasiveness of histological procedures (21-23). In a study carried out by Smeets et al. the results showed that having more than 4 stages of Mohs surgery and lesion size of 4 cm or higher increase the chances of recurrence (15), while Paoli et al. showed no significant relationship between different factors and recurrence (13). Leibovitch et al. showed that previous recurrence, longer tumor lifetime, and the higher number of surgery stages increase the chances of recurrence (14). However, the results of this study showed that the recurrence was related to the location of initial lesion with lesions in body, arms, feet, head, neck, hands, legs, or genital organs having a higher recurrence rate, while in Leibovitch’s study, which is similar to the current study, there was no significant relationship between the size and location of lesion and recurrence.

The results of this study showed that only the lesion size had a significant effect on treatment cost; it means that the treatment cost in tumor size less than 2 cm was more than lesion size ≥ 2 cm. Other studies investigate factors affecting the cost of treatment for Mohs surgery in BCC. The study by Smeets et al. showed that the cost of BCC treatment with a 5-year follow-up period was 405.79 Euros. The details of these costs included the direct costs of personnel involved in treatment based on work hours, the cost of materials used, procedure costs, and the costs of histopathological tests (24).

In a study by Essers et al. the average cost of BCC treatment with a 5-year follow-up was 254 Euros with the costs being divided based on pre-surgery costs, surgery costs (personnel, materials, pathological costs, and hospitalization), complication costs, treatment, after surgery visits, and phone consultations. The highest and lowest costs belonged to surgery (406 Euros) and pre-surgery (147 Euros), respectively (9).

Mosterd et al. calculated that the average cost of 5-year initial BCC Mohs surgery treatment including personnel, procedures, and materials used during surgery, pathology tests, and doctor visits was 1248 Euros (10). In this study, the cost of treatment along with 4-year follow-up period was 409 US dollars including surgery cost and surgery medicine (176 $), after surgery visits and medicines (135 $), restoration (67 $), and pathology tests (31 $).

Although the average surgery costs calculated in this study are lower than the costs reported in other mentioned studies, given that some of these studies consider personnel costs while others, like our study, ignore these costs, and because different studies use different calculating methods and different number of follow-up years, it is difficult to compare the costs between different studies.

Due to a retrospective cohort method of the study, the information about patients was extracted from their medical files. Therefore, it is entirely possible that at different times, different surgeons were responsible for the treatment. Given the difference in the proficiency of different surgeons and increase in surgeon proficiency over time, it is possible for the number of recurrence cases to chance over time, which can lead to information bias. Another limitation of this study is the lack of histology report on BCC and its possible effects on recurrence. Also, in order to increase the sample size and improve the power of the study, the follow-up period was 4 years. However, some studies have used a 5-year follow-up period, which can be another limitation of this study.

In this study, the results showed that the most common location for BCC lesions is in the face area and lesions in this area can lead to scarring and future psychological problems for patients.

The causes of recurrence can include the less use of protective equipment in front of sunlight or low precision of doctors in the lesion surgery in locations of the body, arms, feet, head, neck, hands, legs, or genital organs.

The authors thank the Deputy of the Health of Isfahan University of Medical Sciences for their help with this study.