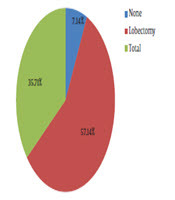 Thus, elucidating the exact role of thyroidectomy, its efficiency, and parameters associated with thyroid gland involvement is critical in treating the patients with the larynx and hypopharyngeal cancers.

In this retrospective study, the medical records of 117 patients admitted to Loghman Hakim Hospital from 2001 to 2015 with laryngeal and hypopharyngeal carcinoma, who underwent laryngectomy with or without thyroidectomy as a primary treatment of cancer, were evaluated. Several parameters, including gender, prevalence, location of the thyroid gland and lymph node involvement, the exact type of malignancy, differentiation stage of the tumor cells, the exact method of thyroidectomy, thyroid function, and its post-surgical cancer recurrence were assessed.

Considering the above-mentioned information, an appropriate sample size of the study for evaluating the incidence of thyroid gland involvement in different types of larynx and hypopharynx cancers, the efficiency of thyroidectomy and the impact of thyroid involvement on the rate of relapse and survival of patients seems necessary.

This study was performed extensively and reviewed by written medical records of 117 patients admitted with the larynx and/or hypopharyngeal cancer diagnosis in the ear, nose and throat (ENT) and Head and Neck Surgery Department of Loghman Hakim Hospital from 2001 to 2015. Our target population underwent laryngectomy with or without thyroidectomy as a primary treatment of cancer. After considering several parameters, including gender, prevalence, location of the thyroid gland and lymph node involvement, the exact type of malignancy, differentiation stage of the tumor cells, the exact method of thyroidectomy, thyroid function, and its post-surgical cancer recurrence, 117 patients were chosen based on the available data. The informed consent form for using clinical information in their files has been completed by all patients. The required information is extracted from the patient’s clinical records. The information that was analyzed include age, gender, onset and duration of symptoms, clinical stage, location of involvement, grade, preoperative thyroid function, clinical examination results of larynx, thyroid and neck, surgical type, type of thyroidectomy, surgical complications, radiotherapy, postoperative results of thyroid and parathyroid biochemistry tests, smoking history, and overall disease-free and disease-related survival. Patient tracking duration was at least 5 years.

The results of this study showed that in our study, the prevalence of laryngeal cancers was significantly higher in males (92.31%) than females (7.69%) (Figure 1A). The mean age of the disease was 58.47 years. The level of involvement in the anatomical regions of the larynx was the highest in the supraglottic area with 34.19%, the glottic involvement was 26.50%, the transglotitic was 23.93%, and the subglottic area was 15.38% of the patients (Figure 1B). The study of surgical procedures utilized in the treatment of patients with laryngeal carcinoma demonstrated the number of supraglottic surgery procedures in 3 patients, the verticular procedure in 3 subjects, and the total method in 111 patients (Table 1).

Table 1. The Surgical Methods Used in the Treatment of Patients with Laryngeal Carcinomaa

aThe supraglottic method was performed in 3 patients, vertical in 3, and total in 111.

Table 2. Staging of 117 Patients, Who Have Been Diagnosed with Laryngeal Carcinomaa

According to the results, the rate of differentiation in cancer cells based on pathologic findings was 20.5% poorly differentiated, 63% distinct, and 16.5% distinct differentiated (Figure 2A). A comparison of thyroid gland function before and after surgery showed that 21% of the patients with thyroid gland involvement had hypothyroidism after the surgery (Table 3).

Table 3. Comparison of Thyroid Gland Function Before and After Surgerya

aIt was shown that 47 patients had normal thyroid glands after surgery, while 63 had hypothyroidism.

Table 4. The Number of Tumor Recurrence After Primary Surgerya

The results of this study showed that the prevalence of laryngeal cancers was significantly higher in males than females and the highest decades of age for the patients were in men, who were mostly in their sixth decade and in women who were mostly in their fifth decade. A comparison of the extent of involvement in different anatomical regions of the larynx showed that the highest level of involvement was in the supraglottic region, which is 34.19%. The involvement of the glottic was seen in 26.50% of the patients, 23.93% of the transglotitic region, and 15.38% in the subglottic area. Previous studies suggested a greater involvement in the supraglottic region, which was consistent with our results (14, 15). In a study, glote had a higher level of involvement (16). Only 16.5% of cancer cells were distinctly differentiated and the degree of differentiation could be a critical factor in the thyroid gland invasion in laryngeal carcinoma.

The prevalence of laryngeal cancers was significantly higher in males than females; this type of cancer is more common in men because far fewer women than men use tobacco. Based on our findings, the rate of thyroid gland involvement in the pathology report after surgery was approximately 3.41% of the thyroid gland involvement, which is low. We concluded that thyroidectomy is a very efficient way, but it should be limited to cases of subglottic or transglottic involvement or in cases of bilateral tumors, high staging, post-cricoid involvement, and clear radiological evidence or in the event of muscle involvement.