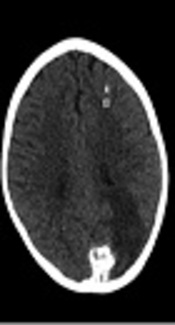 Brain Metastases in a 12-Year-Old Girl with Osteosarcoma: A Case Report

Osteosarcoma accounts for about 3% of childhood cancers and this tumor is the most common primary bone tumor. Lung and bones are the most common sites of metastases. Brain metastases are very rare and account for approximately 1.8% to 5.6% of all metastases.

In this study, we reported osteosarcoma in a 12-year-old girl with primary lung metastases and subsequent brain metastases.

In patients with osteosarcoma and evidence of pulmonary metastasis, performing brain imaging, even without evidence of neurologic sign and symptoms is reasonable.

Osteosarcoma is a primary malignant bone tumor that is characterized by osteoid producing malignant cells (1). This tumor accounts for about 3% of childhood cancers (2). The patients with osteosarcoma present with localized pain and swelling of the affected area (3). The most common sites of primary tumors in children and young adults include the distal femur, proximal tibia, and proximal humerus (4). Between 15% to 20% of patients have the demonstrable macrometastatic disease at the time of presentation (5). The dissemination of osteosarcoma pattern is hematogenous, due to the lack of lymphatic drainage of long bones (6). The most common sites of metastasis are the lungs, followed by other bones (5). Brain metastases are very rare, and account approximately 1.8% to 5.6% of all metastases with prior pulmonary metastasis (5, 6).

A 12-year-old girl admitted after falling and trauma to her right shoulder with persistent pain in her shoulder. She complained from chronic cough since 1 month earlier. Chest and shoulder X-ray were obtained and showed severe involvement of both lungs (Figure 1A) and humerus bone (Figure 1B) with calcified lesions. Brain computerized tomography scan (CT scan) was normal. Calcified lesions in both lungs (A) and right humerus bone (B)

The biopsy was performed and conventional osteosarcoma, osteoblastic subtype was reported.

Chemotherapy was started with ifosphamide, adriamycin, and cisplatin‑based regimen. Nine weeks after treatment, the patient complained from headache and suffered a seizure. Brain CT scan showed calcified lesion with peripheral edema in the left occipital lobe (Figure 2I) and smaller one in the left frontal lobe (Figure 2II) in favor of brain metastases. Calcified lesion with peripheral edema in the left occipital lobe (I) and smaller one in the left frontal lobe (II), in nine weeks after treatment

Brain metastases are rare in osteosarcoma and lung tumoremboli invading the brain is the main cause of metastases (7). This metastasis locates through the anterior circulation to the gray-white matter junction (8), as was seen in the patient’s imaging. 2-year survivals for patients with metastatic disease and patient with recurrent disease is less than 10% to 30% (9).

Ten to 15% of patients with pulmonary involvement have simultaneous central nervous system metastasis (10).

Patients with metastasis to the central nervous system have a very bad prognosis, and they will survive just for a few months. Only in the absence of active pulmonary lesions, craniotomy or radiosurgery may help them to have long-term survive (11).

In the study by Paulino et al. they used radiotherapy to slow neurological deterioration in patients with the brain metastasis (15), and in the other research, Flannery et al. recommend Gamma Knife Stereotactic Radiosurgery (GKSRS) as a new modality in the treatment of these patients (16).

Five-years overall survival (OS) for patients with relapsed osteosarcoma is less than 25%. The 5-year OS of patients presenting with metastatic disease at diagnosis is also about 20% to 30% (17) and overall the mean survival of patients with the brain metastasis is about 18 months following its detection (12).

Unfortunately, despite aggressive chemotherapy and palliative radiotherapy, the patient of this research died after 1 month.

In patients with osteosarcoma and evidence of pulmonary metastasis, performing brain imaging is reasonable, even without evidence of neurologic sign and symptoms.