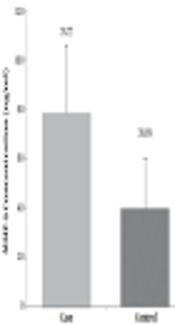 Head and neck squamous cell carcinoma (HNSCC) is the sixth common cancer worldwide. A hallmark of cancer progression is degradation of the extracellular matrix by matrix metalloproteinases (MMPs) that allows cancer cells to invade the surrounding tissue.

The purpose of this study was to evaluate the levels of MMP-2 and 9 in serum and salivary of HNSCC patients and compare it with a healthy group.

Twenty patients with newly diagnosed HNSCC, who had not received any treatment, referred to Omid and Ghaem hospitals, Mashhad, Iran, and twenty healthy controls were voluntarily included in this study. Salivary and blood samples were collected from both groups and the concentration of MMP-2 and MMP-9 were measured by enzyme-linked immunosorbent assay (ELISA). Statistical analysis was performed by SPSS using Student t-test or Mann-Whitney with significance level of ≤ 0.05.

The salivary analysis indicates that an altered composition for MMPs in HNSCC, suggesting a potential diagnostic tool for oral cancer. The serum level of MMP-9 appears to be a reliable marker for early diagnosis in HNSCC patients.

Squamous cell carcinoma accounts for more than 90% of head and neck cancers (1). Despite many advances have been made in recent decades in therapeutic fields such as surgery, chemotherapy, and radiotherapy, the 5-year survival rate is still lagging behind (2). The advanced lesions of oral squamous cell carcinoma (OSCC) often occur with pain, halitosis, difficulties in speaking, and swallow, whereas the initial lesions do not have any symptoms (3). Although the oral cavity can be directly examined, most patients are detected with weak prognosis in the advanced stages of the disease (4). It seems that delay in diagnosis is the primary reason for high mortality rates associated with this cancer (5). Therefore, an early diagnosis would lead to better treatment results and can increase the five-year survival rate up to about 80% (6).

The lack of early warning signs represents the importance of finding biomarkers with high sensitivity and specificity for early detection and screening of high-risk individuals (2). Matrix metalloproteinases (MMPs) are a family of extracellular zinc-dependent endopeptidases capable of selectively degrading various components of the extracellular matrix (ECM) and non-matrix proteins. Most of the members of this family share a catalytic domain with a conserved zinc binding site followed by a C-terminal hemopexin-like domain involved in the recognition of specific substrates. MMP-2 (gelatinase A) and MMP-9 (gelatinase B), which harbor an additional collagen-binding domain inserted in the catalytic domain that binds collagens and fibronectin. MMPs are upregulated in various types of human cancer and are associated with tumor progression including invasion, angiogenesis and metastasis, and poor prognosis. MMP-2 and MMP-9 are the most studied MMPs in cancer since their overexpression in tumor cells is linked to metastasis and advanced tumor stages. Recent investigations have shown that these 2 gelatinases play important roles in migration, invasion, and angiogenesis of tumor cells by releasing ECM-associated growth factors, modulating the activities of cytokines and chemokines, and inducing critical intracellular signalling cascades through interaction of their hemopexin (PEX) domain with cell surface receptors (7).

To date, there is no study on the evaluation of serum and salivary levels of MMP-2 and MMP-9 in patients with OSCC. In this study, the protein levels of MMP-2 and MMP-9 in the saliva and serum of patients with head and neck SCC (HNSCC) were compared with those of the healthy subjects in a case-control study and their relationships with the stage and grade of SCC were determined. In addition, the salivary and serum levels of these proteins were evaluated within each group to determine whether there is a direct correlation between their serum and salivary levels.

In this pilot case-control study, 20 patients with head and neck squamous cell carcinoma presented to the Omid and Qaem hospitals in Mashhad, Iran from October 2014 to June 2015, were selected using purposive non-probability sampling technique. HNSCC of the case group was confirmed by histopathology and they had not received any treatment before the sampling. The control group was included 20 normal volunteers who had no history of malignancy or immunodeficiency.

Patients with immune deficiency diseases, other malignancies, renal or liver diseases were not included in the study. Additional exclusion criteria were the presence of any kind of oral malignancy in the control group during the experiment and also the patient’s dissatisfaction.

Demographic data such as age and gender; malignancy-related features including the site of involvement, symptoms and TNM (T: primary tumor size; N: regional lymph nodes involvement; M: metastasis) as well as the history of alcohol and smoking consumption were recorded in special forms based on the medical records and interviews with the patients.

Saliva sampling was performed according to the standard technique. At 9 to 11 A.M., participants were asked not to eat, drink, smoke or use any hygienic device during at least an hour before sample collection. To prevent the salvia proteins from degradation, the samples were stored at -80°C until being analyzed (2). The saliva samples were centrifuged at 4500 g for 20 minutes to separate the cells and debris.

Blood samples were drawn before treatment. Serum was separated within an hour after blood collection; the venous blood samples were kept at room temperature for 30 minutes to be clotted, and then were centrifuged at 2000 rpm for 15 minutes. Afterwards, sera were collected and kept at -80°C until being analyzed.

3.3. Analysis of Serum and Salivary MMP-2 and 9 Levels by Sandwich ELISA Technique

The data were presented in nanograms per mL. In this experiment, serum and salivary levels of both active type (82 kD), as well as the pre-enzyme (92 Dk) of MMP-9 protein was measured in a 3.5- hour phase assay; and MMP-2 level was quantified in a 4.5- hour ELISA solid phase assay. Briefly, the microtiter plates were coated with either anti-MMP-2 or anti-MMP-9 polyclonal antibodies, and the standard solutions and samples were transferred into the wells. After washing the unbound materials, the enzyme-linked polyclonal antibody against either MMP-2 or MMP-9 antibodies was added. This was followed by another washing step and the addition of the substrate solution. The developed color was fixed and the light absorbance at 450 nm was measured by a micro-plate reader.

The study protocol was approved by the Ethics Committee of Mashhad University of Medical Sciences, Iran. The methodology was described to all patients and the informed consent was obtained from the study participants.

In order to data collection, data were analyzed by SPSS (version 16) software. The descriptive analysis was done by using tables and charts, while the explanatory analysis was conducted using the 2 appropriate mean comparison test (based on the normality or non-normality of the data, the t-test or Man Whitney test was used, respectively) and the Spearman correlation test. The significance level was set at ≤ 0.05 for all tests.

The tumor site was intra-oral in 11 participants (tongue, Alveolar ridge, palate) and extra-oral cavity in 9 patients (larynx, hypopharynx, and nasopharynx). Stages and grades of the tumors are shown in Table 1. Eleven patients had metastases to lymph nodes and 9 patients had no metastasis.

Table 1. Number of Patients According to Grade and Stage of Tumor

Table 2. Levels of MMP-2 and 9 in the Serum and Saliva of the Case and Control Groupa Table 3. Comparison of Levels of MMP-2, and 9 in the Serum and Saliva of the Case and Control Group

Moreover, the tumor site was subdivided into intraoral or extraoral cavity to evaluate the relationship between variables and tumor site. The results of T independent test demonstrated that serum and salivary levels of MMP-2 or 9 did not have a significant relation with tumor site and metastasis. In addition, the results of ANOVA and Spearman tests demonstrated that there was no significant relationship between serum and salivary levels of MMP-2 or 9 with tumor stage.

Table 4. Serum and Salivary Levels of MMP-2 and 9 in SCC Patients in Relation to the Clinicopathological Features of Tumor

Recent achievements in the field of biological research have provided a better understanding of the molecular processes involved in the pathogenesis and progression of HNSCC and led to the identification of a large number of biomarkers. However, further studies are needed in order to make the clinical application of these biomarkers possible.

MMP-2 and 9 are proteases which play a role in removing the extracellular matrix through collagen IV decomposition and are thus involved in the invasion of tumors and metastasis.

MMP-9 plays a role in inflammation, wound healing, tissue remodeling, movement of matrix-bonded growth factors, and cytokine’s processing (8). MMP-2 (gelatinase A) is expressed at high levels during the growth. This enzyme increases at the sites of tissue damage, inflammation and in the stromal cells of the invading edge of the metastatic tumors.

High expression levels of MMP-9 and MMP-2 was shown in different cancers including HNSCC (9-11). Most of these studies have focused on tissue samples and showed an increased expression of these proteins in tumoral tissues. While, most published research in the field of cancer biomarkers have focused on blood components such as serum, plasma, and urine. Saliva as a source of biomarkers has captured less attention (12). In addition, advantages of the salivary sample can be noted due to the ease of collection, no need for special equipment and a trained person for sampling, and non-invasive and simplicity nature of the sample collection. Thus the establishment of the salivary diagnostic methods in these patients is highly valued (5).

According to the results of the present study, the mean serum levels of MMP-9 in patients with HNSCC were considerably higher than normal subjects. Further, serum and salivary levels of either MMP2 or 9 in the case group were significantly correlated; but this correlation was not observed in the control group.

In the study conducted by Shpitzer et al. (13) MMP-2 and MMP-9 proteins were measured in salivary samples of OSCC patients in which the tumor location was in the lateral border of the tongue. The salivary concentration of MMP-2 and MMP-9 in the case group were higher than the control group. However, in the present study, although the salivary levels of MMP-9 were higher in case subjects, the difference was not significant. In another study in which the MMP-9 concentration was measured in the salivary samples of patients with tongue SCC, its concentration was considerably higher in the patients in comparison with the control subjects (14).

In the other studies (18-22), the MMP-9 protein was represented as a better marker compared with MMP-2 for the evaluation of metastasis and malignant changes and for assessing the clinical features, the prognosis predicting factor, and the accurate grading of tumors. Moreover, in Patel et al. (23, 24) and Xu et al.’s (25) studies, the incidence of MMP-2 was associated with lymph node metastases. The disagreement between these studies might be the result of the variety in tumor locations, the number of samples, population differences, and the diversity in sensitivity of the applied techniques.

As it has been observed in several studies, the serum levels of MMP-9 in patients with HNSCC are significantly higher than that of healthy and treated patients, but this difference was not observed for MMP-2 levels, which is consistent with the results of the present study. Therefore, although there are limited studies in this area, it seems that MMP-2 is not a reliable marker for diagnosis and prognosis of HNSCC.

Due to the limitations of the present study such as small sample size, high diversity in tumors locations, and the lack of age/sex matching between the 2 groups, we suggest that for future studies, researchers use a larger population in which these parameters are matched.

It is not declared by the authors.