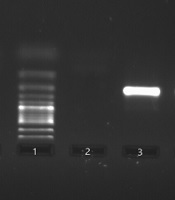 Human herpesvirus type 8 (HHV-8) is a member of the herpes family that, like other herpesviruses, causes a lifelong infection following entrance into the human body. The etiological agent of Kaposi’s sarcoma, this virus, was first identified in a biopsy of a Kaposi’s sarcoma tumor in an HIV-infected patient.

The aim of this research was to evaluate the prevalence of HHV-8 in semen specimens from HIV-negative individuals.

Semen specimens obtained from HIV-negative individuals referred to an infertility center were transferred to the central laboratory for HHV-8 DNA amplification via the nested polymerase chain reaction (PCR) technique.

The prevalence of HHV-8 in the referral population was 26%.

Human herpesvirus type 8 (HHV-8), a subgroup of the Gamma family, was detected for the first time in 1994 by Chang et al. (1). HHV-8 has a genome consisting of 141000 paired nucleotides and is surrounded by cell-cycle proteins such as a cyclin D, which is required for cell proliferation (2). This virus can increase tumor progression and may, therefore, contribute to the pathogenesis of the virus (3, 4).

HHV-8 is an old virus, the genome of which is divided into several subgroups of A, B, C, D, E, and N. In each geographic region, however, certain subspecies are more prevalent. The diffusion of HHV-8 in the different parts of the world can be determined by identifying the subtype of the virus (5, 6). HHV-8 interferes with the human immune system and prevents the normal function of the immune system, which appears to be the virus’s mechanism of action (7, 8). For example, infected B-lymphocytes cannot stimulate T lymphocytes, and nor can infected lymphocytic cells stimulate apoptotic viruses (8, 9). In this way, the virus will be able to survive long-term in human endothelial cells and epithelial cells and continue to grow and proliferate. The replication of HHV-8 consists of 2 latent and lenticular sequences. The virus can remain latent in many epithelial and endothelial cells and B lymphocytes (10), with the latter being of great significance as a reservoir for HHV-8. A great deal of research has been previously conducted on the role of HHV-8 as an etiologic agent of several diseases such as Kaposi’s sarcoma, Castleman’s disease, multiple myeloma, angiosarcoma, and lymphoma in body fluids (11, 12).

Seroepidemiological studies have shown that HHV-8 does not have a uniform spread in the world and geographic differences play an important role in the prevalence of HHV-8 in different areas. The HHV-8 infection rates are lower in North America and Europe, whereas they are higher in some areas such as the Amazon Basin, Italy, and Africa. Generally, the prevalence of HHV-8 increases by advancing age, and younger people with HIV may exhibit higher seroprevalence rates (15, 16). Thus far, only a few studies have been conducted to identify the seroprevalence of this virus in Iran. In one of these studies, the rate of infection with HHV-8 was 2% in the normal population, 16.9% in patients on hemodialysis, and 45.7% in HIV-positive individuals. There are no records of viral DNA in the semen analysis of the normal population in Iran (17, 18).

Accordingly, we designed the present study to evaluate the prevalence of HHV-8 DNA in semen samples from HIV-negative Iranian adults.

In this cross-sectional study, semen samples were collected by masturbation from 100 men attending the infertility clinic at a university hospital between May 2017 and September 2018. All the cases had serological evaluations for HIV infection as a part of the infertility workup program. Those who were negative for HIV were included in this study, and all subjects, who had a history of genital lesions, HIV infection, or any sexually-transmitted disease, were excluded. In all the cases, the semen sample was divided into 2 equal parts: 1 part was used for semen analysis, consisting of motility, sperm count, morphology, viscosity, viability, pH, and volume according to the guidelines of the World Health Organization, and the other part for DNA extraction.

DNA extraction from the sperm cells was performed, using the QIAamp DNA Mini Kit according to the manufacturer’s instructions (QIAGEN™), and the extracted DNA was kept at -20ºC until use. Thereafter, the ratio of absorbance at 260 nm and 280 nm was applied to measure the purity of the extracted DNA.

Prior to HHV-8 analysis, all the specimens were assessed for the presence of ampliﬁable DNA by β-globin gene PCR, using the following set of primers (19); forward: 5’- ATGGTGCACCTGACTCCTGAGG -3’ and reverse: 5’- GCCATCACTAAAGGCACCGAGC -3’ (Bioneer, South Korea). Nested PCR primers specific for HHV-8 were used for the analysis of the sample DNA extracts. HHV-8-nested PCR was performed, using the following set of outer primers; forward: 5’- AGCCGAAAGGATTCCACCAT -3’ and reverse: 5’- TCCGTGTTGTCTACGTCCAG -3’ for the first round. The reactions were carried out, using Ampliqon Taq 2 × Master Mix RED (Ampliqon, Denmark). The PCR amplifications of HHV-8 were conducted in a SimpliAmp™ Thermal Cycler (Thermo Fisher Scientific Inc, USA) with the following conditions: denaturation at 94ºC for 5 minutes, followed by 38 cycles at 94ºC for 30 seconds; 58ºC for 30 seconds; and 72ºC for 20 seconds with a final extension at 72ºC for 7 minutes. The nested PCR reagent mix contained the same reagents as the first-round PCR mix, with the exception of PCR products as the template and inner primers.

Next, 1 μL to 2 μL of the first-round PCR product was used as a template in the second round of amplification. Additionally, the second-round PCR was performed, using the following set of inner primers; forward: 5’- TTCCACCATTGTGCTCGAAT -3’ and reverse: 5’- TACGTCCAGACGATATGTGC -3’. The PCR condition for the amplification of the second round started with an initial denaturation temperature at 94ºC for 5 minutes and 35 extra cycles, including denaturation at 94ºC for 30 seconds, annealing at 57ºC for 30 seconds, replication at 72ºC for 20 seconds, and final extension at 72ºC for 5 minutes. The clinical samples with a positive result were considered positive controls, and sterile water and the clinical samples with a negative result were regarded as negative controls. Positive reactions yielded an amplicon of 211 bp, which were identiﬁed by agarose gel electrophoresis (Figure 1). The data were analyzed and calculated by both analytical and bootstrap (number of replicates = 100) methods. We used the population proportion sample size formula. We considered α = 0.05, the margin of error = 0.05, and P = 0.07 as pilot sample proportion; so, the calculated sample size was considered 100. The analyses were carried out, using SPSS Statistics for Windows, version 16 (SPSS Inc, Chicago, Ill, USA).

The protocol of this cross-sectional study was approved by the Ethics Committee of Shahid Beheshti University of Medical Sciences. Informed consent was obtained from all the patients.

The study population consisting of 100 individuals with an average age of 34.21 years (SE = 0.606) were referred to a university-affiliated infertility clinic. The prevalence of HHV-8 was calculated with a 95% confidence interval via both analytical and bootstrap (number of replicates = 100) methods. The results showed that 26% of the HIV-negative study participants had HHV-8 in their semen fluid (Table 1).

Table 1. The Prevalence of HHV-8

Although HHV-8 is a well-known etiologic agent in the pathogenesis of Kaposi’s sarcoma, its prevalence in the population and its mode of transmission are not well understood (20). The suggested routes of transmission include sexual, parenteral, vertical, and interfamilial person-to-person spread; nonetheless, the main route of transmission appears to be sexual (21).

HHV-8 sequences have been detected in various body fluids, including semen with varied results. According to several studies, semen specimens from HIV-1-positive individuals are frequently positive for HHV-8 in contrast to HIV-1-negative persons (22-24).

The evaluation of the HHV-8 frequency in semen specimens from healthy individuals has 2 implications; first, it reflects the prevalence of the virus in the general population; and second, it can be used to estimate the risk of the virus transmission to women receiving donor semen for assisted reproductive procedures, both of which necessitate regional studies in this regard (24, 25). Currently, semen donors are screened for some viruses, including HIV-1, human T-cell leukemia virus type 1 (HTLV-1), hepatitis B virus (HBV), hepatitis C virus (HCV), and cytomegalovirus (CMV) (24).

In a study for the detection of HHV-8 in semen specimens collected from infertile patients, 17% of the samples were positive for herpesviruses and the Epstein-Barr virus (EBV) was the most frequent virus type (7.1%). The association between the presence of the virus and altered semen parameters was seen only with EBV (increased concentrations of polymorph nuclear granulocytes) (26).

The first report of HHV-8 in semen from an HIV-negative American population was in 1995 with a prevalence rate of 23% (27). In Italy, an initial prevalence rate of 91% (30/33) in semen specimens from HIV-negative patients was followed by a smaller control study detecting a frequency of 23% (28). Nonetheless, the results of some other studies, including an investigation on 115 English men and a survey on 20 Italian men, challenged those findings by showing no HHV-8 via nested PCR in semen specimens from semen donors (28-30). Moreover, in a study by PCR and nested PCR on 100 Danish donors, all the specimens were negative for HHV-8 (25).

This variability in the prevalence of HHV-8 in semen specimens could be due to geographic dissimilarities, ethnic diversities, HIV status varieties, and procedural sensitivities (eg, the probability of contamination in PCR) (31).

Our study, performed on 100 HIV-seronegative men referred to an infertility clinic, showed a 26% frequency rate of HHV-8 in semen specimens via nested PCR.

In this study, the possibility of contamination was very low due to the study design, which included sufficient negative controls to exclude any false-positive result. Furthermore, the specimens were fresh without added albumin, which is a source of contamination present in pooled sera used in sperm banks. The prevalence of HHV-8 in semen specimens from a normal population can reflect its seroprevalence. The seroprevalence of this virus has been variable among different geographic areas: it has a low prevalence rate in Northern Europe, the United States of America, and most of Asia and a high prevalence rate in sub-Saharan Africa, Mediterranean countries, and parts of South America. The seroprevalence of HHV-8 among different geographic areas of the Mediterranean region (32) and in the hyper-endemic regions of Brazil (33) was independent of gender and showed a linear association with age. In the Mediterranean region, the seroprevalence ranged from 9.7% among children younger than 14 years old to 26.3% in patients aged above 59 years (32). In Brazilian Amazon Amerindians, the seroprevalence of HHV-8 ranged from 35% among children to 82.3% in adults older than 50 years (33). This association with age, in conjunction with the detection of seropositive cases among young children, further emphasizes the presence of nonsexual routes in the transmission of the virus. Men comprised our entire study population with an age range of 32 to 46 years old. Needless to say, a comprehensive evaluation of the HHV-8 prevalence in different age groups in Iran requires further research.

In the Middle East, the existing literature on the prevalence of HHV-8 is limited to only a few studies. One of these investigations in Saudi Arabia reported the seroprevalence of this virus in healthy individuals and renal transplant recipients to be 1.7% and 18%, respectively (23).

In Israel, healthy individuals had a seropositive rate ranging between 8.4% and 22% (34, 35). The results of the present study are comparable to the findings of a seroprevalence study previously conducted in Iran by Jalilvand et al. (17), who investigated the seroprevalence of HHV-8 by direct enzyme immunoassay and indirect fluorescent-antibody techniques to detect IgG antibodies against lytic antigens in 3 different groups and reported a seropositivity rate of 2% among blood donors, 16.9% among patients on hemodialysis, and 45.7% among HIV-positive patients. Ahmadpoor et al. (36) evaluated 100 renal transplant recipients for antibodies against the latent nuclear antigen of HHV-8 and reported a 25% rate for HHV-8 seropositivity. The authors also reported that 47% of their patients were seropositive in the group older than 55 years, as opposed to 20% in the group aged below 55 years (36).

Our study demonstrates that HHV-8 DNA is detectable in semen specimens from healthy (HIV-negative) individuals in Iran. A larger study, including different geographic areas in Iran, is needed to estimate the prevalence of HHV-8 and its main route of transmission.

We are grateful to our dear colleagues at the Men’s Health and Reproductive Health Research Center for their invaluable assistance in this project.