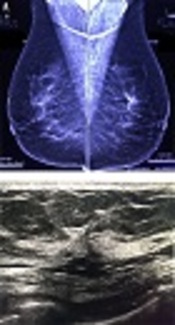 The Outcome of Primary Architectural Distortion in Mammography: Which are the Important Factors?

Architectural distortion is an important mammographic finding for non-palpable breast cancer, which is a difficult part of mammographic reporting.

In this descriptive, comparative cross sectional survey, 30 consecutive patients with mammographic primary architectural distortion were enrolled. The pathological findings were determined through core needle biopsy and compared across the other variables.

We define architectural distortion (AD) as the deformation of the normal structure of breast. AD can present as either an associated finding with mass or sole finding. In this article, we use AD to refer to distortion without accompanying mass in mammography. The diagnosis of AD in mammography is difficult and AD can be easily missed by inexperienced reporters (1). Also, AD might not have an apparent correlated sonographic feature, which further increases the difficulty of its diagnosis and biopsy (1). Some studies have mentioned AD as a common finding in retrospective evaluations of false negative cases of mammography (2). AD is also reported as the third most common mammographic sign of non-palpable breast cancer (3). AD has various causes, including previous surgery, biopsy, trauma, fat necrosis, radial sclerosis, sclerosing adenosis, and invasive cancers (4). Some studies have classified AD into primary and secondary types; secondary AD is used when there is a known previous intervention on the breast (5). Primary ADs are idiopathic distortions without any previous history of biopsy, surgery, trauma, or hematoma. Early diagnosis of distortion would result in a greater impact on prognosis, even more than microcalcifications alone (4, 6-8).

In this study, we evaluated the mammographic primary ADs in our center and correlated them with sonography and pathology results.

In this prospective descriptive, comparative cross sectional survey, 30 consecutive patients with primary mammographic AD in the Breast Clinic of Cancer Institute (affiliated with the Tehran University of Medical Sciences) were enrolled between April 2016 and April 2017 among 1200 reported mammograms. Informed consent was obtained from subjects and ethical approval was approved by the Ethics Committee of Tehran University of Medical Science. The approval ID is IR.TUMS.IKHC.REC.1396.485. A total of 103 patients with secondary AD, who had any kind of previous breast intervention, were not included in this study. Data were recorded in the checklist, including demographic information of age, clinical findings, pathological findings, family history of cancer, ultrasound findings by a superficial probe of 9 - 12 MHz (Esaote my lab device), and mammography findings by digital images (full digital Hologic mammography) (Figure 1). A, bilateral mediolateral view mammography of a patient shows an architectural distortion without mass or microcalcification in upper part of the left breast. B, in sonography of the same patient, an architectural distortion without mass is detected. Core needle biopsy under sonography guide was done; fibrocystic changes with sclerosis adenosis were reported in the pathology result.

All imaging was done by two breast-specialized faculty member radiologists with 9 and 20 years experience in breast imaging. Then, all cases underwent a core-needle biopsy with either an ultrasound or mammography guide, and the obtained samples underwent a pathological assessment in the same center by faculty members of pathology department. The pathological findings were determined and compared with the other variables.

Among these patients, 5 cases had a positive family history of breast cancer in their first-degree relatives and 11 patients in second- and third-degree relatives, which was not significantly related to the cancer pathology (P = 0.553).

All patients received breast imaging reporting and data systems (BI-RADS) 4 or 5, and all patients with BI-RADS 5 had high-risk or malignant pathology. Table 1 shows the patients’ BI-RADS and their pathologies.

Table 1. The Patients’ BI-RADS and Their Pathologies

Table 3 demonstrates that the malignant and pre-malignant lesions were more likely to have simultaneous clinical symptoms (P = 0.040).

Table 3. Clinical Symptoms of Patients with Their Pathology Resultsa

There was a significant association between biopsy results and ultrasound findings (P = 0.013), and the frequency of mass lesions in ultrasound was more common in those patients with IDC. Table 4 shows the sonographic findings and their association with pathology results.

Primary ADs are subtle mammographic findings that might have benign or malignant causes (1). In our study, 60% (18) of the patients were malignant: most of whom were invasive than in situ; invasive ductal carcinoma (IDC) was observed in 13 (43.3%) patients and carcinoma in situ (CIS) was seen in 5 (16.7%). In a study carried out by Pinochet et al., 44.23% of the ADs were cancers and mainly the invasive type (78.2%), which is in line with the present study (9). Alshafeiy et al. stated that the malignancy rate of AD in 2D mammography was 43.4%, while ADs found only in digital breast tomosynthesis (DBT) had a much lower malignancy rate (10.2%) (10).

In our benign case, FCC was the most prevalent (5, 16.7%), whereas other benign pathologies were accounted for 6 (20%) and just 1 (3.3%) case was an Adenosis sclerosing. In Pinochet’s study, the most benign finding was stromal fibrosis (66%) (9). Radial scar or complex sclerosing lesion was the most common nonmalignant pathology in the study of Bahl et al., which included 369 cases of AD over a 10-year period (6).

In a Japanese study, 54 cases with DCIS without invasive component were assessed, and it was found that 5 cases showed the distortion in preoperative mammography without mass. All of these had microcalcifications in the same area of AD (7). In our study, 5 cases of CIS (16.6%) were detected among all of the included ADs; this is not in line with the findings of study performed by Bahl et al. (6) on 369 cases of AD, which showed 4.1% DCIS. Among our cases of CIS, 3 had positive sonography, 2 had clinical symptoms, 2 had associated findings of focal asymmetry, and 1 showed microcalcifications.

This study detected some factors that increase the risk of being malignant for AD: higher BI-RADS category of preoperative mammography (P = 0.064), accompanying mammographic lesion (P = 0.004), positive clinical symptoms (P = 0.040), and presence of findings in ultrasonography (P = 0.013) were related to pathological results and greater chance of cancer.

Bahl et al. reported that AD with positive sonography correlated with a higher malignancy rate (P < 0.001), while they did not find a statistically significant difference in the malignancy rate between AD with and without calcifications or asymmetries (P = 0.26) (6).

In a study by Alshafeiy et al., the malignancy rate was not significantly different for tomosynthesis-detected AD with or without a sonography correlation (10).

It is worth noting that without positive ultrasound, AD still requires biopsy, which can be done under a mammographic guide. In this study, 2 malignant cases of AD (CIS) had normal sonography. None of the sonographic-normal ADs were invasive cancer.

A limitation of our study is the low number of cases. This is linked to the fact that primary AD is uncommon and includes more cases requiring a long time to collect them. The strengths of our study included the following: it was prospective, two faculty member breast specialists confirmed the findings before registering in the study, and all cases were fully evaluated by target ultrasound and additional mammographic analysis. One other positive point about this study is evaluating different factors, which can increase the chance of malignancy in AD that was less explained before.

Based on our findings, we conclude that AD in imaging is accompanied by malignancy in 60% of the cases. The most common benign pathology accompanied by AD was fibrocystic changes with hyperplasia and the most common malignant one was invasive ductal carcinoma. Higher BI-RADS category, associated mammographic findings, diagnostic versus screening mammography, and positive ultrasonography were related to a greater probability of malignancy.