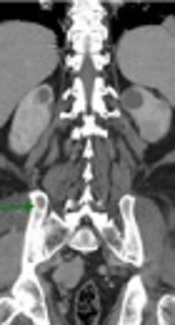 Multifocal Extramedullary and Multiple Solitary Bone Plasmacytoma: A Case Report and Review of the Literature

We report such rare case of multiple extramedullary plasmacytoma involving skin and soft tissues of abdomen wall, pelvic, chest, and solitary plasmacytoma bone in rib 6 chest and in bone of sacrum also diagnostic work up, treatment and care to the patients we have done.

Prognosis is very poor, and if it is appropriate to stem cell, transplantation is considered to prevent recurrence.

Plasmacytoma is a localized tumor, not consistent with multiple myeloma and without other systemic characteristics of multiple myeloma including bone pain, weakness, fatigue, constitutional B symptoms, hepatomegaly, splenomegaly, neurological symptoms, and bleeding. Plasmacytoma have 2 clinical presentations, including solitary plasmacytoma of bone and extramedullary plasmacytoma. Plasmacytoma may be solitary or multiple even aggressive and disseminated. The literature reviewed showed the solitary bone plasmacytoma consisting of 2% to 5% of plasma cell dyscrasias evaluated at referral centers. Plasmacytomas of bone most commonly arise from the axial skeleton and there is a male preponderance, and the median age is 55 years (1). Extramedullary plasmacytomas (EMP) represent 3% to 5% of all plasma cell dyscrasias with male predominance. The literature showed that EMP most commonly occurs between the 4th and 7th decades of life, and also most commonly affects submucosa of the upper aerodigestive, paranasal sinuses, nose, nasopharynx, and tonsils (2). The evaluation of a patient with a lesion suspected to solitary plasmacytoma or extramedullary plasmacytoma, whose diagnosis was confirmed after tissue biopsy, include a complete history and physical examination and a biochemical profile screen that consists of measurements of complete blood count and differential, biochemical values, beta-2 microglobulin, protein electrophoresis, quantification of immunoglobulins, and serum-free monoclonal light chain. A bone marrow aspiration and biopsy revealed less than 5% plasma cells. Skeletal bone survey with plain radiographs or magnetic resonance imaging (MRI) including the humeri and femoral bones should be performed in all patients. In diagnostic criteria for extramedullary plasmacytoma, no other osteolytic bone lesions is added (3). Multiple solitary plasmacytomas may be developing over time in approximately 5% of the patients with apparently solitary plasmacytoma. The International Myeloma Working Group in 2003 has recognized a separate classification of plasmacytomas that occurs as multiple sites of disease in soft tissue, bone, or both soft tissue and bone as multiple solitary plasmacytoma (4). Solitary bone plasmacytoma are treated surgically with or without adjuvant radiation, although now, definitive radiation therapy is the treatment of choice (5). The EMPs are radiosensitive tumors, and this leads to the acceptance of radiotherapy as the treatment of choice for this disease and in some cases usually followed by radiation therapy. Patients not responding to radiotherapy should be treated with chemotherapy; also, chemotherapy is indicated in cases of disseminated disease. Patients with more extensive disease may benefit from systemic therapy, as indicated for myeloma (6). Newer agents including thalidomide and bortezomib have also been used successfully in small number of patients with relapsed plasmacytoma (7). We report an extremely rare disease, in which there is the involvement of multiple sites of disease in skin, soft tissue, bone, meaning that there is disseminated organ involvement.

A 62-year-old man presented with pain a mild swelling in the area of right lateral of ribs 4 and 5 and pelvic bone pain from 1 month ago. His past medical history was not significant. After 1 month, he presented with a multiple reddish mass noted in the posterior triangle of the neck, in skin of scalp and in posterolateral aspect of abdomen, and in right leg and swelling and pain in right flank. Examination revealed multiple reddish mass of skin fixed to the overlying skin (Figure 1) and multiple mass, which was firm in consistency, non-mobile, mild tender, and in posterolateral aspect of abdomen. Complete blood count and biochemical values were within normal limits. Serum and urine electrophoresis for gamma globulins and Bence-Jones protein were negative. The bilateral bone marrow aspiration and biopsy were negative for myeloma cells. The patient underwent a bone marrow cytogenetic and no specific chromosomal abnormality was seen. The skeletal X-ray did show lytic lesion in the 6th rib. Abdominal computed tomography scan shows a lytic lesion in sacrum bone (Figure 1) as well as multiple mass lesions in lateral wall of abdomen and pelvic (Figure 1). An incisional biopsy was performed; microscopically showed skin tissue with infiltration of malignant monotonous cells with peripheral located vesicular nuclei in superficial and deep dermis with extended to epidermis (Figure 2). Given the systemic nature of the disease, which was aggressive, the candidate for chemotherapy started chemotherapy regimen cycles every 28-day by Cyclophosphamide, Vincristine, Dexamethasone, and Doxorubicin (C-VAD). The dose is adjusted according to the patient’s age. After 4 cycles of treatment, significant regression of lesions occurred. During the follow-up of 5 months, this patient developed fulminant progressive disease of the skin and bones without bone marrow involvement. The patient was a candidate for the bortezomib, but unfortunately, because of the patient’s refusal to accept treatment, 2 months after progression of disease, the patient died due to pneumonia.

The results of the literature review of 8 series (128 patients with EMP) provided by Dimopoulos et al. (8) showed that the local relapse rate was 7% and multifocal relapse occurred in 13% of the patients. The findings of a review that investigated 52 cases collected through a rare cancer network study, which was performed by Ozsahin et al. (9), were similar. Median time to failure of treatment is nearly 2 years. Wiltshaw (10) reported in his study that patients with EMP may be disseminated. An extramedullary plasmacytoma at this stage (disseminated) and also the possibility for conversion to multiple myeloma exist. When plasmacytomas involve soft tissue, especially skin, the disease is usually more aggressive compared to marrow involvement. In these circumstances, the possibility of life-threatening infections is high and this infection may lead to death. In our patient, the prognosis was very bad and he eventually died.

The purpose of this case report was to review its prognosis. In cases, where there is accompaniment both multifocal extramedullary plasmacytoma and plasmacytoma of bone involvement especially when there is skin involvement, the prognosis is very bad, and if it is appropriate to stem cell, transplantation is considered to prevent recurrence.

The authors would like to thank Oncology-Hematology Ward of Imam Reza Hospital.