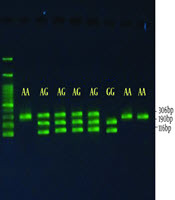 Catechol-O-methyltransferase (COMT) gene is one of the genes involved in estrogen metabolism, which plays a role in the detoxification of estrogen metabolites. Gene polymorphisms can affect the expression of the enzyme and contribute to the incidence of breast cancer.

Two functional polymorphisms, rs2020917 and rs2075507, were studied in the position of COMT gene promoter with the potential for breast cancer.

In the present case-control study, 103 women suffering from breast cancer and 100 healthy women were selected within the same age range. After blood sampling, the DNA of samples was extracted by the saturated salt method. Then, the specimens were amplified with specific primer and determined by genotype RFLP-PCR method.

The two groups were similar in terms of age in the spectrum, but they had a significant difference in body mass index (BMI). GG mutant genotype of rs2075507 polymorphism indicated a statistically significant relationship between the two groups and increased the risk of breast cancer by 2.27%. The rs2020917 polymorphism showed no difference between the two groups, but it had a significant relationship with BMI. A combination of the genotypes showed that the individuals carrying GG/CC genotypes increased the risk of breast cancer in their body by a factor of 2.45.

The results from two functional polymorphisms in the distal promoter of COMT gene indicated the relationship between rs2075507 and the risk of breast cancer, and rs2075507 mutant genotypes and wild rs2020917 genotype were highly susceptible to breast cancer. BMI was significantly different between the two groups and also with rs2020917 polymorphism. Further studies in this area will provide stronger results.

Breast cancer is one of the most common malignancies among women, and prolonged exposure to estrogen is one of the key factors for its progression. A strong mechanism of estrogen carcinogenesis is based on its mitogenic effects and stimulation of cell division, resulting in an increased error during the simulation (1).

The liver is a place for estrogen biosynthesis and its biological transformation (2). Estrogen is an intermediate between estradiol and 17-b-hydroxysteroid dehydrogenase (17b-HSD). In the oxidative pathway, estrogen and estradiol are converted by the cytochromes P450 (CYP) 2B1, 1A, 3A into 2-hydroxyestradiol (2-OHE2), and 4-hydroxyestradiol (4-OHE2) (3). Hydroxylation intermediates are soluble in water by Catechol-O-methyltransferase (COMT) and can be easily excreted (4).

COMT is found in numerous tissues including the breast (5) and it has innumerable biological activities (1). The metabolism of endogenous catecholamines and other catecholamines are catalyzed by COMT (6).

COMT gene is about 27 kb on chromosome 22 (22q.11.2) and consists of 6 exons. The gene is identified as having 2 distinct promoters that can code 2 different MB-COMT and S-COMT transcription products (7). S-COMT isoform consists of 221 amino acids, which are transcribed from exon 3 by the promoter P1 that starts in intron 2. However, MB-COMT isomorphism starts with P2 promoter in 5 transcriptional genes and it has about 50 additional amino acids in the N-terminal protein, which lies among the membranes (8). The gene expression is influenced by various polymorphisms, according to reports (9, 10).

Some genetic variants, reducing the activity of COMT enzyme, increase the risk of breast cancer (11). Although changes such as SNPs in non-encoding regions of the gene are not translated as proteins, they may have an effect on RNA transcription process, RNA truncation, sustainability, translation, and translation of mRNA (12). The COMT gene variants have different effects on the activity of the COMT enzyme. Rs2020917 polymorphism was associated with increased gene expression and rs2075507 (newly modified, previously rs2097603 (13)) was associated with reduced activity of the COMT enzyme (11).

In this study, the relationship between two polymorphisms, rs2020917 (ancestors alleles C to T) and rs2075507 (ancestors alleles A to G in reverse), changes in the endotracheal promoter region (P2) of the COMT gene (8) with susceptibility to breast cancer was studied.

In this study, 103 women suffering from breast cancer and 100 healthy women without any history of breast cancer were selected from patients referring to Shohada Tajrish Hospital in Tehran. The survey was conducted in accordance with the guidelines of the Helsinki’s Declaration. Breast cancer in patients was confirmed by mammography and other diagnostic tests and based on a specialist physician’s comment. The healthy group did not suffer from any disease including cancer, diabetes, hypertension, etc., and among their first-degree relatives, there was no cancer including breast cancer.

After blood sampling, the DNA of samples was extracted by salting out method, and their quantity and quality were confirmed by spectrophotometry and agarose gel. Subsequently, by pre-designed primers, the desired parts were amplified to cut off the parts of the enzyme-propagated products. The sequence of primers and the length of the amplified fragment, as well as the specific enzyme, are presented in Table 1.

Table 1. The Sequence of Primers and the Length of the Amplified Fragment and the Specific Enzyme

The results of the genotypes were counted to determine the percentage of genotypes and the frequency of the alleles was based on the Hardy Weinberg equilibrium. SPSS 23 software was used to analyze the data. The chi-square, logistic regression, and Pearson correlation tests were used to analyze the relationship between variables. The significance level was considered P ≤ 0.05.

Regarding polymorphism, rs2075507 is an ancestral allele or major A and minor G allele (8). The length of the fragment was amplified with 306 bp synthesized primers and the HindIII enzyme was used to detect homozygous GG genotype, 116 bp, and 190 bp on the gel. The presence of polymorphism inhibited enzyme activity and the same amplified fragment was observed at 306 bp, indicating the homozygous AA genotype. The heterozygote genotype also showed the 306, 190, and 116 bp, 3 bands on the gel (Figure 1). Figure 1. The results of digestion of PCR products in the number of rs2075507 polymorphism specimens-DNA marker size is 100 bp.

Table 2. The Relationship Among the Frequency of Genotypes and Genetic Models with the Risk of Breast Cancer

Regarding polymorphism, rs2020917 is an ancestral allele or major C and a minor allele or modified T (8). The amplified product was 181 bp long, which was digested with MscI (MIsI) enzyme to detect homozygous CC genotype, digested portions of 119 bp and 62 bp on the gel. For homozygous TT genotypes, enzymatic digestion did not occur, and the same 181 bp was observed. In the presence of 181, 119, and 62 bp bands on the gel, the genotype of the heterozygote CT/TC was determined.

Table 3. The Relationship Among the Frequency of Genotypes and Genetic Models with the Risk of Breast Cancer

Table 4. The Relationship Among the Genotypes with the Risk of Breast Cancer

Table 5. The Relationship Among of the Genotypes with Age and BMI

One of the SNPs located in the estrogen-sensitive region of the MB-COMT isomorphic promoter region, rs2075507, reduces the activity of the COMT enzyme in vitro. However, rs2020917 changes the transcriptional process by altering the potential for changes in the COMT gene methylation mechanism (15). Since the COMT enzyme plays a key role in modulating catechol-dependent functions such as recognition, cardiovascular functions, and pain sensation (16), most studies are also in these areas. The role of this enzyme in carcinogenesis has been less studied.

In the study of Hatzimanolis et al. (17), the role of functional variants of the COMT gene, including rs2020917, with emotional disorders in women was investigated. Because the COMT enzyme plays a role in the metabolic pathways of catecholamines-like steroid hormones such as estrogen and due to the role of estrogen in the high prevalence of depression in women, changes in MB-COMT isomorphism promoter in people with affective disorders were investigated and the results showed the effect of genetic variation on the depression of women (17) In this study, the effect of genetic changes in the pathway of estrogen metabolism such as rs2020917 on breast cancer was investigated, but the probability of low sample size was not significant.

In reports, there was a link between the genetic diversity of COMT and the sensitivity to pain that was reviewed by Hyungsuk et al. In their study, rs2020917 polymorphism also existed in the COMT gene, but the different clinical outcomes of pain sensitivity after surgery were found (18). Rs2020917 polymorphism is likely to affect estrogen metabolism. Our results showed a significant relationship between the two groups in the codominant genetic model.

In a study conducted by Ji et al. (14), the hypothesis of the effect of COMT genetic variation on the risk of breast cancer was studied; by examining 15 SNPs, rs2020917 was identified as one of the two SNPs presented in the distal promoter region affecting breast cancer. This polymorphism leads to the increased transcription of the gene and changes the pattern of DNA binding to the protein, which is associated with the risk of breast cancer (14). The results of the current study showed that, unlike this study, individuals, who have wild alleles for rs2020917 polymorphism and homozygous mutant genotypes for rs2075507 polymorphism, probably suffer from breast cancer 4.28 times more than that of other genotypes.

In the study of Gothelf et al. (19), the biological effects of COMT haplotypes including rs2075507, on psychological disorders with the 22q11.2 deletion syndrome were investigated. Three haplotypes, including rs2075507, were effective in the enzyme biotype and reduced enzyme activity. The current study also showed an effective role of rs2075507 in breast cancer.

COMT polymorphic forms seem to reduce the enzyme activity in women than men, which can affect their reactivity and make them more susceptible to pain syndromes. The COMT enzyme metabolizes not only catecholamines but also metabolizes estrogens, in particular 2-hydroxyestradiol, 17-beta-hydroxyestradiol, 2-hydroxyestrogen, and 4-hydroxyestradiol. Estrogens such as 17-beta estradiol activate the promoter regions P1 and P2 in the COMT gene and result in controlling the production of COMT. Decreasing the COMT activity results in the increased levels of several destructive estrogen products and, in turn, increases the risk of breast cancer in women (20). Therefore, two changes in the gene promoter region were selected for study, both of which were involved in the enzyme activity.

An interesting point in combining genotypes was that the carriers of GG/CC genotypes were associated with a risk of breast cancer and increased by 4.245 times the chance of getting them.

Different results obtained from various studies are influenced by factors such as the genetic characteristics of the individual and the expression of genes in response to different environmental conditions. Drugs and chemicals that affect the metabolism of estrogen are effective in the expression of genes and they can interfere with estrogen metabolism. More studies are needed in different climates and conditions to achieve definitive results.

The authors would like to express their gratitude to the medical personnel at Shohadaye Tajrish Hospital in Tehran and to all the patients, who participated in this study. This article was extracted from a master’s thesis by Zahra Tahmasebi Fard.