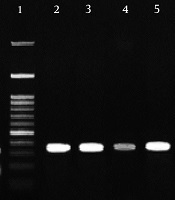 The mechanism of the relationship between obesity and the risk of breast cancer is still unknown.

A total of 158 patients with breast cancer and 158 healthy subjects within the same age range were recruited. After taking blood sample, DNAs were extracted using the salting-out method. Then, the polymerase chain reaction-restriction fragment length polymorphism technique was used for genotyping. The histopathological characteristics were determined by the immunohistochemistry technique.

Investigation of the relationship between BMI and alleles showed that the G (Arg) mutant elevated the risk of affection by 2.294 times, while the allele A had a descending effect by 0.375 times. The comparison of genotypes with histopathological changes showed a significant relationship between the GG (Arg/Arg) genotype and higher levels of progesterone receptor expression (P = 0.005), invasive type of cancer (P = 0.010), and stage of the disease (P = 0.003).

People with higher BMI who also carried G (Arg) mutant of Q223R polymorphism were more prone to breast cancer. Also, tissue changes in the ones carrying this allele were more than those harboring the wild-type A (Gln) allele.

Obesity occurs due to the combined effects of genes, environment, and lifestyle, as well as the interaction of these factors (1). Postmenopausal obesity increases the risk of breast cancer in females by 30% - 50%. In addition, higher BMI is significantly associated with increased risk of inflammatory breast cancer in both menopausal and postmenopausal females. It is reported that patients with obesity exhibit larger and more advanced tumors and more invasive pathological features of cancer, such as lymph node metastases (2).

Adipose tissue and its associated semi-cytokine proteins- i.e., adipokines, especially leptin and adiponectin- were investigated as the obesity-associated mediators of breast cancer. Higher levels of leptin in individuals with obesity can act as a growth-promoting factor, while the lower levels of adiponectin in females with obesity might be useful in the growth-promoting effects of leptin since adiponectin has anti-proliferative effects (3).

Leptin is a protein hormone that is mainly produced by adipocytes, placenta, and breast epithelium, and plays an important role in controlling the metabolism, reproductive processes, immune responses, angiogenesis, hematopoiesis, and oxidation of lipids. Leptin can promote the development of breast tumors through several mechanisms such as modulation of the extracellular environment, reduction of apoptosis, or enhancing the regulation of anti-apoptotic genes (4).

Leptin is a 16-kDa cytokine encoded by the ob gene. It was first identified in 1994 as a regulator of body weight and energy balance through the hypothalamus. Leptin exerts its effect through the transmembrane leptin receptor, ObR. In human tissue, at least four different isoforms of ObR with different COOH domains are identified; the ObR1 lengths 1165 amino acids and consists of extracellular, transmembrane, and intracellular domains. Short isoforms lack the downstream domains to transmit the signal (5).

One of the leptin receptor gene polymorphisms (LEPRs) is A to G substitution in exon 6 at nucleotide 668 and codon 223 of the initiation codon, LEPR Q223R (rs1137101), which in turn disrupts the leptin binding activity. LEPR Q223R polymorphism is associated with a decrease in BMI, fat mass, serum leptin levels, and systolic and diastolic blood pressures. Other studies, however, contradict these findings (6); for example, Liu and Liu, in a meta-analysis study, showed that LEPR Q223R polymorphism can contribute to the spread of breast cancer in East Asia (7). Another meta-analysis by Wang et al., on 10 studies including 2759 patients and 4464 controls, showed that rs1137101 and rs1137100 polymorphisms are significantly associated with the risk of breast cancer (8).

In the current study, the presence of rs1137101 polymorphism was evaluated in some patients with breast cancer compared with the control group, in terms of BMI and histopathological changes.

A total of 158 females with breast cancer and 158 healthy controls referring to Shohada-e-Tajrish Hospital, Tehran, Iran were recruited. Blood samples were taken from all the subjects after physical and clinical examinations and diagnosis confirmation by the specialist.

Patients who needed surgery were selected and confirmed by biochemical tests and mammography of their cancer. Those who had previously received radiotherapy or chemotherapy were excluded. Control subjects had no history of high blood pressure, diabetes, and cardiovascular diseases; in addition, none of them had cancer, including breast cancer.

A 3 - 5 mL blood sample was taken from each subject after obtaining the informed consent; then, the blood sample was added to 0.5 mM EDTA to be prepared for DNA extraction by salting out method. Specific primers were used to amplify the Q223R polymorphism fragment. The sequence and length of the amplified fragment are shown in Table 1.

For each PCR reaction, 10 μL water, 10 μL Amplicon 2X Mastermix (containing 1.5 mg MgCl2, buffer, DNA Taq polymerase, and dNTP plus other materials required for the reaction), 1 μL of each 10-ρmol primers, and 100 ng (1 μL) the genomic DNA of each patient were mixed. The PCR mixture was then vortexed and the microtubes were placed in a thermocycler (Eppendorf Mastercycler gradient, Germany) apparatus for the amplification a 366-bp fragment of LepR gene according to the following program: 95°C for 5 minutes in one cycle, 95°C for 60 seconds, 60°C for 30 seconds, 75°C for 40 seconds in 35 cycles, and 72°C for 5 minutes in one cycle. The final PCR products as well as a 100-bp (Roche) marker, were electrophoresed on a 1.5% SYBR® Safe DNA Gel Stain at a constant voltage of 95 V for 15 to 20 minutes to visualize the bands. The results of the amplification of some samples are shown in Figure 1. Figure 1. The results obtained from the electrophoresis of PCR products of rs1137101 polymorphism on 1.5% agarose gel. First well is Marker (100 bp), Wells 2- 4 normal samples, and wells 5-8 is cancerous samples.

After visualization of the 366-bp band, a portion of the amplified sample was added to 5U of Msp I restriction enzyme, the enzyme buffer, and distilled water in a new microtube and then incubated at 37°C for 16 - 18 hours. The product of enzymatic digestion was run on 3% agarose gel. There was only one cutting site on the amplified segment of the enzyme, and based on the size of the fragments formed on the gel, the patients’ genotypes were determined. The results of digestion for some samples are shown in Figure 2. Appropriate paraffin blocks and slides were selected from each patient's samples for immunohistochemical testing. The tumor type and its degree were determined based on the Bloom Richardson system (9). Subsequently, the experimental stages were evaluated using specific antibodies (Dako, Denmark), estrogen, and progesterone. Slides were studied with light microscopy and the color intensity of at least 20% of tumor cells was considered as the positive boundary of estrogen and progesterone receptors.

Genotypes count, percentage, and frequency were determined in two groups of the cancer patients and the controls. The allele frequencies in both groups were determined using the Hardy-Weinberg equilibrium; then, the relationship between genotypes and the risk of breast cancer in two groups was evaluated by chi-squared test in SPSS version 23. The relationship between genotypes and breast cancer was evaluated by logistic regression based on the odds ratio (OR) and 95% confidence intervals (CI). Pearson correlation coefficient was used to calculate the correlation between variables. P < 0.05 was considered as the level of significance.

aContinuous variable are reported as means ± SD, and discrete variables are expressed as No. (%).

Table 3. Frequency of Alleles and Genotypes (rs1137101) Distributions of Characteristics Among Patients and Control Groups

The relationship between genotypes and estrogen and progesterone receptors expression, type of cancer, and the stage of the disease was also studied. Those who carried the mutant genotype showed more histopathological changes. The results are presented in Table 4.

Table 4. The Relationship Between Genotypes of Polymorphisms rs 1137101 with Pathology Information of Patients

Table 5. The Relationship Between BMI and Genotypes of Polymorphisms rs1137101 in Two Groups

Obesity is associated with serious illnesses such as cancer. Obesity caused by the lifestyle and unhealthy diet also increases the risk of cancer. Many studies showed a significant relationship between obesity and high rate of death from cancer. However, the mechanism by which obesity can cause breast cancer is still unclear (10).

Studies in animals and humans also showed that leptin plays a pivotal role in the regulation of energy homeostasis, neuroendocrine function, metabolism, immune function, and bone metabolism (11). The mutations in the leptin and leptin receptor can reduce leptin receptor signaling. According to the results of different studies, mutations are associated with cancer in humans. It is recently reported that leptin and its receptor can lead to the initiation and progression of breast cancer. Regarding Q223R polymorphism, the glutamine (Gln) for arginine (Arg) substitution occurs at amino acid 223 in the second extracellular receptor of leptin (12). This change turns the neutral amino acid into the positive-charge one and affects the capacity of signaling and receptor function to such an extent that in homozygous G allele carriers, higher levels of leptin are observed in hemoglobin that is associated with increased risk of breast cancer in female carriers (13). In addition, observations showed that functional variation in the leptin receptor gene is one of the important factors for the modification of obesity and BMI (14).

Previous reports indicated a significant relationship between Q/R genetic variation in leptin receptor and breast cancer and reported a higher frequency of LEPR 223Arg allele in the patients group than the controls. According to studies carried out by Snoussi et al. (15), Han et al. (16), Gallicchio et al. (17), and Okobia et al. (18), this polymorphism was in correlation with the risk of breast cancer, which is in line with the results of the current study. In the present study, the frequencies of G mutant allele in the patients and control groups were 0.84 and 0.71, respectively; while the frequencies of wild-type A allele were 0.16 and 0.29 in the patients and the control groups, respectively. Also, the risk of the disease was 3.704 times higher in patients with G allele than the ones with A allele, which indicates a strong association between this polymorphism and breast cancer.

But contrary to the findings of the current study, those conducted by Woo et al. (19), Nyante et al. (20), El-Hussiny et al. (21), as well as a meta-analysis by He et al. (22) showed no significant correlation between this polymorphism and breast cancer. It seems that reasons such as sample size, employed techniques, smoking and alcohol consumption, environmental factors affecting the lifestyle, and genetic changes in different populations and races can affect the contradictory results.

According to the obtained results, the leptin gene GG (Arg/Arg) genotype of Q223R polymorphism can be considered as a risk factor for the development of breast cancer. The carriers of this genotype who have obesity are at higher risk for breast cancer. Histopathological changes also confirmed the effect of this polymorphism on breast cancer. It seems that genetic changes can alter the metabolism of breast tissue, increase their growth by hormones such as leptin, and elevate the risk of breast cancer. Further studies can confirm the results.

This work was supported by a grant from the Research Council of Roudehen University.

The author would like to express their gratitude to the medical personnel at Shohaday-e-Tajrish Hospital in Tehran and all the patients who participated in this study. Special thanks to Dr. Nafisi for introducing the patients for the research.