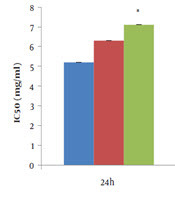 Osteosarcoma; is one of the most common malignant tumors. Nowadays, because of the many side effects of cancer drugs, the usage of herbal medicine which can inhibit or eliminate cancer cells by their antioxidant compounds is increased.

In the present study anticancer effect of Tilia dasystyla and Polygonatum orientale Desf different extracts on osteogenic sarcoma (Saos-2) cancer cell line was investigated and their polyphenolic compounds were identified by liquid chromatography-mass spectrometry (LC-MS) analysis. The cytotoxic effect of these extracts on Saos-2 cell line and identification of their phenolic compounds have not been reported so far.

According to the results diluted water extracts on the Saos-2 cancer cell line showed more cytotoxic effect than other solvents. The lowest IC50 value was 0.58 ± 0.01 mg/mL within 72 hours belonged to T. dasystyla water extract.

Tilia dasystyla and Polygonatum orientale Desf extracts contain some polyphenolic compounds which showed cytotoxic effect on Saos-2 cancer cell line. The full potential of these herbal extracts is yet to be realized by further studies on animal models and subsequent trials.

Skeleton malignant tumor, defined as osteosarcoma, can metastasize to the other parts of the body, particularly lungs. Osteosarcoma, one of the most common malignant tumors, is more common in young age; this cancer is one of the most common types of cancer that occurs in mesenchymal bone marrow cells and affects the musculoskeletal system (1, 2). Prescription drugs suppress the immune system and have many side effects, for this reason, antioxidant compounds obtained from herbal extracts are preferred to prevent cancer or to support the treatment (3, 4).

Herbal medicine contains several antioxidant compounds, which neutralize free radicals and prevent lipid peroxidation. Plants are a rich source of antioxidant compounds that can protect cells from oxidative damages. Plants contain secondary metabolites, such as phenol and flavonoids, these compounds have antioxidant properties with strong potential for the clearance of free radicals in order to prevent diseases such as cancer (5, 6). Tilia is a genus in the Tiliaceae family with about 30 species of trees. These trees are found locally in Northern Hemisphere areas and known as a safe product as herbal medicine for symptoms of cold and anxiety. Tilia is used as anti-inflammatory, anti-diarrhea, anti-spasmodic, anti-hair loss, anti-anxiety, and sedative medications since it contains the wide range of bioactive compounds. Tilia bioactive compounds include hydrocarbons, esters, terpenes, quercetin, kaempferol, tannins and scopoletin, and other polyphenolic compounds (7, 8).

P. orientale Desf belongs to Asparagaceae family which grows in North of Iran. The rhizome of Polygonatum is used as an herbal medicine in traditional medicine. The anti-depressant, anti-inflammatory, anticancer, anti-fever, antioxidant, and antimicrobial activities of the Polygonatum rhizome have been shown in many studies (9, 10). Variety of compounds such as polysaccharides, saponins, phytohormones, glycosides, flavonoids, and alkaloids have been isolated from Polygonatum rhizome. Polysaccharides of Polygonatum have the most variety among the other compounds in these plants that have shown anti-cancer properties. Pharmacological studies on several species including P. odoratum, P. verticillatum, P. cyrtonema, and P. kingianum have been reported (11, 12).

The purpose of this study was to investigate the cytotoxic effect of P. orientale Desf and T. dasystyla methanol, ethanol, and diluted water extracts on osteogenic sarcoma (Saos-2) cancer cell lines and identification of their phenolic compound by liquid chromatography-mass spectrometry (LC-MS) analysis. The LC-MS method is used to accurately identify phenolic compounds.

The cytotoxic effect of T. dasystyla and P. orientale Desf extracts on the Saos-2 cell line and identification of their phenolic compounds by the LC-MS method has not been reported until now.

Amount of 1 g of the dried plant was added in 100 ml of 80% aqueous methanol, 80% aqueous ethanol, and diluted water solvents. The solvents were boiled in water bath for 60 min at temperature of 70°C. Extracts were centrifuged for 20 min at 2000 rpm, supernatant was used in lyophilization process. Methanol, ethanol, and water solvents were completely removed by lyophilization process and powder of plants was dissolved in PBS to determine the cytotoxic effect of the extracts on the cancer cell line. For sterilization of solution, 0.22 mm filters were used and then solution was diluted with DMEM F12 culture medium to concentrations of 0.5 - 5 mg/mL (13).

To determine the inhibition effect of extracts on the proliferation of cells, cell viability was detected by measuring MTT absorbance of viable cells. Eight-thousand cells for each well were seeded into 96-well plates for 24 h, after 24 h cells were treated with various concentrations of extracts, and were incubated for 24 h, 48 h, and 72 h in incubator. Subsequently, 10 mL of MTT (5 mg/mL) was added to each well and then cells were incubated for 4 hours. Then 100 mL of solubilization buffer was added to the wells and plates were kept in incubator for overnight, and then absorbance was measured at a wavelength of 570 nm using a microplate reader (CytationTM Biotek, USA).

The percentage of cell viability was calculated using the formula:

The extracts were prepared with methanol solvent. Amount of 0.5 g of the dry sample added to 10 mL of 80% aqueous methanol solvent. The mixtures were heated for 60 min in water bath at 70°C. Then, the mixtures were centrifuged at 2000 rpm for 20 min at 25°C. The supernatants were filtered through a 22 µm filter then was used for the identification of total phenolic contents by LC-ESI/MS analysis.

Statistical analysis was performed using the ANOVA test by SPSS version 24 program and the P Value < 0.05 was considered significant. Data were expressed as means ± standard deviation.

IC50 values of different T. dasystyla extracts on the Saos-2 cancer cell for 24, 48, and 72 h. Experiments are performed in triplicate and express as the mean standard deviation. Values in each column marked with * show significant differences between solvent (water, methanol, and ethanol) in each time (P < 0.05).

IC50 values of the different P. orientale Desf extracts (water, methanol, and ethanol) on the Saos-2 cancer cell for 24, 48, and 72 h. Experiments are performed in triplicate and express as the mean standard deviation. Values in each column marked with * show significant differences between solvent (water, methanol, and ethanol) in each time (P < 0.05).

The maximum cell growth inhibition of the Saos-2 cell line was at 72 hours and at a concentration 5 mg/mL of T. dasystyla and P. orientale Desf water extractswith 14% and 29% of cell viability, respectively. According to Figure 3, the lowest values of IC50 was 0.58 ± 0.01 mg/mL belonged to T. dasystyla water extract. The lowest IC50 value of P. orientale Desf was 2.9 ± 0.01 mg/mL belonged to water extract. T. dasystyla showed more cytotoxic effect than P. orientale Desf and the water solvent was the most efficient in extracting antioxidants among the other solvents. The most effective solvents with anticancer properties were water, methanol, and ethanol extracts, respectively. Data statistical analysis (P value < 0.05) of Figures 1 and 2 indicated that there was a significant difference between all solvents in T. dasystyla extracts and there was a significant difference between ethanol solvent with water and methanol solvents in P. orientale Desf extracts. Comparison of the IC50 values of the T. dasystyla (T) and P. orientale Desf (P) different extracts (water, methanol, and ethanol) on the Saos-2 cancer cell for 24, 48, and 72 h. Experiments are performed in triplicate and express as the mean standard deviation.

A solvent system consisting of methanol and acetonitrile was successful in the separation of phenolic compounds in the plant extracts with good resolution.

Results of identification and fragments are shown in Figures 4 and 5. Cytotoxic effect of various concentrations of T. dasystyla and P. orientale Desf extracts using three different solvents including water, methanol, and ethanol. According to the data statistical analysis (P value < 0.05) of data in Figures 1 and 2, water was the most efficient solvent in the extracting antioxidants, since water extract showed more cytotoxic effect on Saos-2 cancer cell line, after water, methanol was more efficient solvent among others. Also extracts showed time- dose depended manner in cytotoxic effect on Saos-2 cells. According to the data of Figure 3, the maximum inhibition of cancer cells growth was at 72 hours and at a concentration of 5 mg/mL of T. dasystyla water extract with the percentage of 86% cell growth inhibition.

Phenolic compounds identification of T. dasystyla and P. orientale Desf were performed by LC-MS analysis for the first time in this study. But phenolic compounds of other species of Tilia and Polygonatum have been identified in other studies.

The cytotoxic effects of T. dasystyla and P. orientale Desf extracts on cancer cell lines have not been reported so far. However, some studies have reported the anticancer properties of other Tilia and Polygonatum species.

Based on the results, the extracts of T. dasystyla and P. orientale Desf contained polyphenolic compounds which never been isolated before from these species. Cytotoxic effect of extracts on Saos-2 cancer cell line may be due to the presence of antioxidant compounds such as phenol and flavonoids. In addition, the results showed water solvent is more efficient in extracting of antioxidants. T. dasystyla contained more polyphenolic compounds than P. orientale Desf and this could be one of the reasons for the anti-cancer properties of T. daystyla. This study requires more detailed investigation in future studies. Isolation and purification of the polyphenolic compounds in these plants and their anti-cancer effect on different cell lines and finally how to use them in the pharmaceutical and health industries in future studies can be investigated.