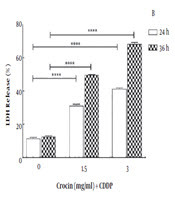 Anti-tumor effects of crocin have been investigated in different tumors; however, its precise molecular mechanism is not exactly elucidated.

In the present investigation, we have studied pro-apoptotic and anti-proliferative properties of crocin and cisplatin combination on cervical cancer cells.

The results of this study demonstrated that the combination treatment of cells with crocin and cisplatin significantly reduced the proliferation of cancer cells and induced apoptosis. Furthermore, the Bax/Bcl-2 ratio and the mRNA level of p53 markedly increased in treated cells, whereas it decreased miR-365 expression, an upstream regulator of Bcl2 and Bax.

Accordingly, crocin could be a potential candidate for more evaluations such as in vivo studies, since it shows a proper in vitro anticancer effect. It is also suggested that a combination of crocin and cisplatin could be applied as an effective and promising chemotherapy strategy.

Cervical cancer is among the most common causes of gynecological cancer death (1). Like other cancers, chemotherapy along with radiotherapy and/or surgery is serving as the main treatment procedure for this cancer. Cisplatin (cis-diamminedichloroplatinum II, CDDP) is the prime member of platinum-containing anticancer drugs that bind to DNA, cause cross-link of DNA, and finally trigger cell death in a programmed manner (2).

Although chemotherapeutic agents like CDDP have prominent killing effects on tumor cells, their side effects and resistance impact after long-term usage stay significant obstacles for clinical use (3). To beat these challenges, researchers have been shedding light on the combination therapy in recent decades (4). This kind of therapy results in a lower dose of radiation or drugs, thereby reducing chemoresistance and its related side effects (4, 5). Due to the advantages of herbs, combination therapy with them is considered a potential therapeutic strategy for different cancers (6-9).

Crocin is the most significant water-soluble carotenoid from saffron (Crocus Sativus L.) (10), whose anticancer contributions have been reported in numerous cancers such as gastric (10), hepatic (11), leukemia (12), squamous cell carcinoma of tongue (12), bladder (13), pancreatic (14), breast (15) and cervical (9, 16).

According to the published protocol, crocin was extracted and purified from saffron stigma (17).

The OV2008 cell line was cultured in RPMI 1640 media containing 10% heat-inactivated FBS, 100 mg/mL streptomycin and 100 units/mL penicillin. After reaching the desired density, cells were treated with crocin in addition to CDDP and incubated for intended time intervals (0 - 72 h).

The cytotoxic effect of the treatments on cells was measured with the MTT test pursuant to previous studies (18, 19). The cell viability was calculated by dividing the measured absorbance of the cells in each well to the average absorbance of the control cells and, then, the IC50 value (the concentration of drug, which decreases the treated cells viability by 50% in comparison to non-treated cells) was measured for the analysis of the cytotoxic efficiency, using the dose- and time-dependent curves.

The synergy index (q) was calculated by the following formula:

After the treatment duration, cells were trypsinated for 3 minutes and attached and detached cells were, then, pooled together and centrifuged. The pellet was resuspended into 10% phosphate-buffered formalin containing Hoechst staining 33258 (12.5 ng/mL). Using a Zeiss fluorescence microscope (magnification 400×), changes in nuclear morphology were assessed at least 200 cells in each group (20).

The miRNA expression level was measured by a specific miRNA amplification Kit performed in 3 steps based on our previous study (16). All experiments were done at least twice. U6 was chosen as an internal control and the PCR efficiency for miR-365 and U6 primers were measured, using serial dilutions of cDNA.

Western blotting was accomplished as described before (20). Membranes were incubated overnight at 4°C in primary antibodies (anti-Bax and anti-Bcl2 [1:500], anti-p53 [1:1000]; Santa Cruz and anti-GAPDH [1:5000]; Abcam) and, then, incubated with horseradish peroxidase-conjugated anti-rabbit or anti-mouse secondary antibody (1:1000 - 1:10000) for 1 h at room temperature. Then, using the enhanced chemiluminescence kit, we visualized the Peroxidase activity. GAPDH was chosen as the loading control.

The results are demonstrated as the mean ± SD for at least 3 independent experiments (n = 3). The data were analyzed by appropriate statistical tests such as one-way ANOVA and with Tukey’s post hoc test and statistical significance was inferred at P ≤ 0.05, (PRISM 5; Graph-Pad software Inc.).

The cytotoxic effects of various concentrations of crocin (0 - 4 mg/mL) and CDDP (0.003 mg/mL) for 0 to 72 h on OV2008 cells were determined, using MTT assay. Cytotoxic effects of each component were individually reported previously by our team (16, 18). As shown in Figure 1, the cell viability significantly decreased in treated cancer cells in a time- and concentration-dependent manner compared with unchallenged cells after 48 h with IC50 values 1.5 and 1 after 48 and 72 h, respectively. The synergistic index for the treated cells at 48 and 72 h were 1.7 and 0.9, respectively indicative of a synergism degree for 48 h (q > 1.0) and a simple additive effect at 72 h (0.9; 0.8 < q < 1.15) in the combined treatment. To define the mode of cell death, OV2008 cells were cultured and treated with 0 to 3 mg/mL crocin and 0.003 mg/mL CDDP for 0 to 72 h; at least 200 cells in each treatment group were randomly assessed and expressed as the percentage of total cells for typical nuclear morphology of apoptotic cells, including nuclear condensation, shrinkage, and fragmentation. The results showed that combinational treatment led to an increase in the cell’s apoptosis at 48 to 72 h in a concentration- and time-dependent manner (Figure 2). Apoptosis-induced by crocin and CDDP were associated with alteration in apoptosis-related genes and protein expression. To further investigate the impact of this combination treatment on the protein expression of apoptotic-related genes, using Western blotting analyses, we demonstrated that the treatment of OV2008 cells with 3 mg/mL crocin and 0.0015 and 0.003 mg/mL CDDP (individually and jointly) obviously elevated the protein level of p53 and Bax and reduced the Bcl2 protein level (Figure 4).

Figure 4. The effect of CDDP and crocin combination on apoptosis related protein expression.

Cervical cancer is classified as one of the prominent cancers of women in developing countries like Iran (21)s. In spite of the current therapies’ efficiency, the unwanted side effects on normal cells and drug resistance remained the most severe problems for oncologists (22). Chemotherapeutic agents such as CDDP are often used in combination with other drugs to reach effective results. It is hopefully anticipated that drugs can produce synergistic and selective outcomes to kill cancer cells without additional side effects on the normal ones (23-26).

Nowadays, researchers have concentrated on natural products with an effective anticancer characteristic to improve therapeutic strategies for cancer (26-28). Crocin is a natural carotenoid derived from the dried stigma of the Crocus sativus flowers. Its various mechanisms of anticancer property have been reported including interaction with H1-DNA complex (29, 30), down-regulation of human telomerase catalytic subunit (11), cell cycle arrest and apoptosis induction, and antioxidant and anti-proliferative effects (31). Indeed, different studies suggested that crocin combination with other agents increased the efficiency of cancer treatment and reduced the essential dose of the drug (27, 28, 32, 33).

Recently, we have reported the effect of crocin on human cervical cancer cells apoptosis and proliferation (16). In the present investigation, we tried to evaluate the synergistic effect of crocin and CDDP on cervical cancer cell lines to determine the molecular mechanism of their action. We found that crocin augmented the effects of CDDP on cell proliferation and apoptosis. As shown in Figure 1, crocin in combination with CDDP markedly reduced OV2008 cell viability in a dose- and time-dependent manner after 48 and 72 h. In comparison with our previous study (16), the combination therapy of crocin with CDDP reduced the IC50 values of crocin from 2.7 to 1.5 mg/mL (48 h) and 1.5 to 1 mg/mL (72 h). Also, a degree of synergism and simple additive effect were evident in the combination treatment for 48 h and 72 h, respectively.

As shown in Figure 2, a combination of crocin and CDDP enhanced cell apoptosis with morphological changes such as blebbing and pyknotic nuclei. To better understand the molecular mechanism of the cytotoxicity, real-time PCR was performed to assess the expression of p53, Bax, and Bcl2. The treatment of the cells with crocin and CDDP increased p53 expression level and Bax/Bcl2 ratio. p53 was named as a prominent tumor suppressor that regulated cell cycle and programmed cell death (34). Bax family protein members including Bax and Bcl2 have a significant function in the internal pathway of apoptosis, thereby modulating apoptotic capacity and affect drug resistance (35).

On the other hand, non-coding RNAs such as microRNAs regulate gene expression in a post-transcriptional manner and their dysregulation is reported in many diseases including cancers (36). Several studies reported the deregulation of miR-365 in different cancers (37, 38). Bioinformatics and experimental data also demonstrated that Bax and Bcl2 are the two major target genes affected by this micro RNA (39). According to this evidence, we determined the expression level of miR-365 and showed that its expression decreased in treated cells. Taken together, these results suggests that combination treatment in tumor cells increases apoptosis capacity and is p53- and microRNA-dependent.

The findings suggest that crocin plays an important role in adjuvant therapy for potentiating routine chemotherapy. However, for the clinical application, it is necessary to perform confirmatory in vivo and clinical trial studies.

The authors would like to thank the research laboratory personnel in Birjand University of Medical Sciences.