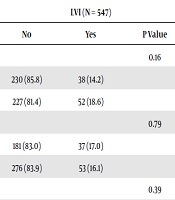 Lymphovascular invasion (LVI) and perineural invasion (PNI) are relatively common in various malignancies including colorectal cancers and have been shown to have prognostic significance.

The aim of this study was to identify the clinical and pathological variables associated with LVI and PNI in patients with colorectal carcinoma, who have been treated at Milad General Hospital in Tehran, Iran.

The records of the patients with the diagnosis of colorectal carcinoma, who had undergone an operation at Milad General Hospital (Tehran, Iran) between 2012 and 2017, were reviewed. All patients, whose pathology reports and treatment records were available at Milad Hospital, were included. Relevant demographic, pathological, and surgical data, including age, gender, tumor location, maximum tumor size, pathologic Tumor, Node, Metastasis (TNM) stage, and grade and number of removed lymph nodes were extracted from the medical records.

In total, 547 patients (374 cases of colon cancer and 173 cases of rectal cancer) enrolled in the study. The prevalence of LVI and PNI was 16.4% and 30.7%, respectively. LVI and PNI were found to be associated with higher tumor grade, higher T-stage, and higher overall stage.

Colorectal carcinomas with positive LVI or PNI are more likely to have a higher grade, higher T-stage, and higher overall stage, and PNI is an independent factor for advanced disease.

The incidence of colorectal cancer, as one of the leading causes of cancer-related mortality worldwide, has been increasing over the last 25 years in Iran. Following cancers of breast and stomach, it is the third most common cancer among Iranian people with the annual incidence of more than 7100 cases (1).

Lymphovascular invasion (extension of tumor cells into lymphatic and/or blood vessels, LVI) and perineural invasion (neoplastic invasion of nerves and nerve sheath, PNI) are relatively common in various malignancies including colorectal cancers and have been shown to have prognostic significance.

The aim of this study was to identify the clinical and pathological variables associated with LVI and PNI in colorectal cancer.

In this observational cross-sectional study, the records of patients with the diagnosis of colorectal, who had undergone an operation at Milad General Hospital (Tehran, Iran) between 2012 and 2017, were reviewed. All patients, whose pathology reports and treatment records were available at Milad Hospital, were included in the study (all available cases) and cases with incomplete records and missing necessary data were excluded from the study.

The chi-square test was used to evaluate the primary association among independent variables with LVI (0 = No, 1 = Yes) and PNI (0 = No, 1 = Yes). Adjusted binary logistic regression models were utilized to test the effect of the independent variables on both LVI and PNI in separate models. Afterward, a mixed variable of LVI and PNI was built by 3 categories of 0 = subjects, who had no LVI and PNI, 1 = subjects, who had at least one of them, and 2 = subject, who had both PNI and LVI. Multinomial logistic regression models were conducted to examine the association between independent variables and mixed variables. Due to the small sample size, T1 cases in binary logistic regression and T1, T2, and stage I cases in multinomial regression were excluded from the analysis. In the modeling process, the first group of dependent variables was considered as the reference except for the AJCC stage. Statistical analysis was performed, using SPSS version 23 (IBM Corp. Released 2015. IBM SPSS Statistics for Windows, version 23.0. Armonk, NY: IBM Corp). P values of ≤ 0.05 were considered as statistically significant.

In total, 547 patients (374 cases of colon cancer and 173 cases of rectal cancer) enrolled in the study. The results of the study are shown in Tables 1 to 3.

Table 1. The Distribution of Study Variables by Lymphovascular Invasion and Perineural Invasion Groupsa

Table 2. Adjusted Odds Ratio and 95% CI for the Effect of Study Variables on the Lymphovascular and Perineural Invasion: Binary Logistic Regression Results

Table 3. Adjusted and Unadjusted Odds Ratio and 95% CI for the Effect of Study Variables on the Mixed Variable of Lymphovascular and Perineural Invasion (Reference Group: Subjects Who Did Not Have None of the LVI and PNI): Multinomial Logistic Regression Results

The prevalence of LVI and PNI in our study was 16.4% and 30.7%, respectively. There was no difference between the incidence of LVI+ or PNI+ in different genders in either colon or rectal cancer. Although there was a trend toward more cases of LVI+ in the right side of the colon compared to the left side and rectum, there was no statistically significant difference between LVI+ cases in the colon (17.4%) and rectum (14.5%) (P = 0.35).

Unadjusted multinomial logistic regression showed that the chance of having both LVI and PNI compared with the reference group was significantly higher for patients of ≥ 60 years old, grade II and III, tumor size of ≥ 5 cm, and stage II and III.

The results of the present study showed that patients with LVI+ were more likely to have higher tumor grade, higher T-stage, larger tumor size, and higher overall stage of colorectal carcinoma. These results are in line with the results of many previous studies (4-6). We also found that the presence of PNI, regardless of the status of LVI, is associated with higher tumor grade, higher T-stage, and higher overall stage.

While some studies have demonstrated that LVI+ is not associated with age (4, 6-8) or is associated with younger age (9), in the current study, patients aged 60 years old and over were more likely to have LVI or PNI, which is similar to the results of Lim SB et al.’s study (10).

Similar to many previous studies, this study showed that LVI or PNI are not associated with gender and age (4, 6-8), while in Al-Sukhni et al.’s study, male gender was associated with more incidence of PNI (5).

For years, the prognostic significance of LVI in colorectal cancer was a subject of controversy. While many studies had considered its presence as a negative prognostic factor, some studies had demonstrated that LVI was of no prognostic significance for colorectal cancers (10). Recent studies have resolved this controversy to a great extent, as several researchers have shown that the presence of LVI in colorectal cancer is a strong stage-independent prognostic factor. LVI is now thought to be involved in the development of lymphatic metastasis and it is considered by many international guidelines as an independent indicator of progressive disease, which can negatively affect patients’ survival (11, 12). Based on the College of American Pathologists Consensus Statement, LVI is considered as a Category I factor, which has been definitively proven to be of prognostic importance based on evidence from multiple statistically robust published trials (13).

PNI refers to the process of neoplastic invasion of nerves and nerve sheath. In many malignancies, including cancers of head and neck, pancreas, colon, and rectum, PNI is a marker of decreased survival and poor outcome (7). PNI is a distinct pathologic entity that can be present in the absence of LVI.

Several studies have demonstrated that the presence of PNI in colorectal tumoral cells is associated with higher rates of locoregional recurrence and decreased survival (14-16).

In the literature, the prevalence of LVI and PNI has been reported to be 21% to 25% and 9.9% to 14% for LVI and PNI, respectively (5). However, it is worth noting that studies that specifically reviewed the pathology samples for the presence of these features have reported higher rates of LVI and PNI positivity (33% and 22%, respectively) (5). By re-evaluating the pathology slides of 50 patients with colorectal cancer, Harris et al. (12) found significant inter-observer variability in the diagnosis of LVI on hematoxylin and eosin (H & E) slides, which were worse in cases of large vessel invasion and did not improve by immunohistochemistry. Another study by reviewing 381 pathology samples showed that the detection of vascular invasion was related to the quality of pathology assessments such as the number of assessed tissue blocks (17). These results highlight the need for high‐quality pathology reporting, more accurate criteria, and standardized quality control for the evaluation of LVI and PNI as the presence of these features can change the course of clinical treatment.

In the present study, 16.4% and 30.7% of cases were found to be positive for LVI and PNI, respectively. While the prevalence of LVI+ in our samples was similar to that of the previous studies, we had a higher rate of PNI+ compared to similar studies, for which we have no explanation.

In conclusion, in this study, we assessed the clinical and pathological variables associated with LVI and PNI in patients with colorectal carcinoma, who have been treated at a referral general hospital in Tehran, Iran. The results showed that colorectal carcinomas with positive LVI or PNI are more likely to have a higher grade, higher T-stage, and higher overall stage, and PNI is an independent factor for advanced disease.

The authors would like to thank the Cancer Research Center of Milad General Hospital (affiliated to the Iranian Social Security Organization) for their help and support.