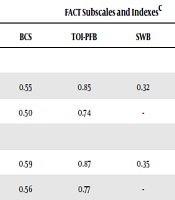 The study aimed at evaluating the validity of the functional assessment of cancer therapy-breast symptom index (FBSI-6 and -8) on Iranian patients.

Overall, 223 patients from three cancer centers participated in the present study. Internal consistency was assessed via Cronbach’s alpha and inter-item correlations. Spearman’s rho correlation was utilized to evaluate convergent/divergent validity and performance of the target indexes in terms of psychosocial distress, compared to trial outcome index-physical/functional/breast (TOI-PFB), as well as TOI emotional/social/breast (TOI-ESB) cancer subscales. The known-groups analysis, using Mann-Whitney U and Kruskal-Wallis tests, was conducted based on the history of metastasis, chemotherapy, radiotherapy, mastectomy, and time since diagnosis. P value < 05 was considered significant.

Both of the target indexes showed acceptable internal consistency. They were highly correlated with physical wellbeing and TOI-PFB, moderately with functional wellbeing and breast cancer subscale, lowly with the arm subscale, and very lowly with social wellbeing (P < 0.0001). All indexes showed significant and negative correlations with distress symptoms (P < 0.0001). The FBSI-8 slightly outperformed FBSI-6 in terms of distress symptoms. No significant differences were seen in the target indexes based on clinical characteristics, including metastasis, chemotherapy, radiotherapy, mastectomy surgery, and time since diagnosis.

The current study confirmed the validity of FBSI-6 and -8 among Iranian women with breast cancer. Further research is required to evaluate the more profound properties of FBSI.

Breast cancer caused 2.4 million deaths from 1999 to 2015 and is suggested as the leading mortality cause among women (1). Breast cancer is the most common cancer among women (2, 3) with an estimation of approximate lifetime risk of 4.5 % (4). Patients, particularly cancer patients, are suggested to be the core members of the treatment and care team (5). In order to provide them with effective care for their physical, emotional, social, and functional issues, the patients require to be examined in terms of both disease signs and their self-reported symptoms. Patient-reported outcomes (PROs), in which the patients’ reports are used to evaluate the symptoms of a condition, are widely utilized in research and clinical practice (6, 7). The merits of these reports lie in the fact that patients’ own evaluations can illustrate the pathways toward a better outcome, especially a satisfying life (8).

One of the most current PROs in cancer research is the functional assessment of cancer therapy (FACT) as a parent instrument (9) with its addendum FACT-B including breast cancer-specific subscale (10). This instrument has provided a breath of investigations to evaluate the physical, emotional, social, functional, and specific domains of quality of life (QoL) in patients with breast cancer (See Smith et al. (11), for a review of randomized controlled trials (RCTs) and Montazeri (12) for a general review). In addition, to assess symptoms in the patients with breast cancer, Yost et al. (13), developed the functional assessment of cancer therapy-breast symptom index (FBSI), derived from the FACT-B. The symptoms were chosen as a priority based on the recommendations of experts in 17 member institutions of the National Comprehensive Cancer Network (NCCN) as an eight-item united index of FBSI (13) and their original study evaluated the validity of the early six-item version (13). Following, Lee et al. (14), confirmed the psychometric properties of the full-form index with eight items.

Although FACT-B provides various indexes that addressing different dimensions of QoL in patients with breast cancer, Iranian research on QoL of the patients rarely utilized the instrument, as implied in a recent systematic review by Bouya et al. (15). It can be argued that research on QoL in this population requires exploration of various variables that influence the symptoms defining the QoL in such patients. Therefore, it is necessary to incorporate different indexes into studies to shed more light on the factors contributing to the patient’s QoL, especially the symptoms.

The FBSI-6 and -8 have not been validated in the breast cancer population of Iran. Besides, previous studies did not address how FBSI-6 and -8 indexes indicate patients’ mental status, compared to the previously introduced index of the trial outcome index (TOI). Therefore, the present investigation aimed at evaluating the validity and applicability of both FBSI-6 and -8 indexes in a sample of Iranian women with breast cancer. Specifically, the current study examined the convergent/divergent validity, known-groups differences, and functional comparison with TOI indexes for both FBSI-6 and -8.

In the current cross-sectional study, a total of 223 female patients with breast cancer were recruited from three cancer centers in Tehran, Iran from Dec-2014 to Feb-2015. The Ethics Committee of Tehran University of Medical Sciences ethically approved the study. The inclusion criteria were age 18 years or above, willingness to participate in the study, ability to communicate in Farsi language, having a diagnosis of any form of breast cancer, and being diagnosed for at least one weak. The patients with any metastatic brain diseases or history of psychiatric disorders were excluded. Inform consent was obtained from all the participants.

Based on experts’ views in terms of the priority of symptoms in breast cancer treatments, FBSI combines six or eight items of FACT-B (13). The FBSI-6 includes four items of physical wellbeing (PWB: GP1-GP4) in addition to one item from each of emotional wellbeing (EWB: GE6) and functional wellbeing (FWB: GF7) domains. These may be added up with two items of breast cancer subscale (BCS: b1, p2) to form the FBSI-8. The higher score indicates lower symptomatology. Yost et al. (13), reported the Cronbach’s alpha for FBSI-6 as 0.76 and 0.75 in two assessments over a 16-week period. Also, Lee et al. (14), reported the test-retest reliability of FBIS-6 and -8 as 0.75 and 0.77, respectively, during 30 days, using the intraclass correlation coefficient. The FACT-B was previously validated among Iranian patients (16).

Depression, anxiety, and stress scale (DASS-21) (17) was used to assess the applicability of the FBSI indexes in comparison with the TOI indexes in terms of psychological outcomes. Each seven-item subscale is scored based on a five-point Likert scale. The scale was previously validated among the Iranian population (18). The Cronbach’s alpha for depression, anxiety, and stress subscales among the study sample were 0.80, 0.71, and .080, respectively.

Internal consistency reliability was assessed via Cronbach’s alpha coefficient and inter-item correlations. Convergent and divergent validities were assessed in two steps; the correlations of FBSI-6 and -8 with physical, functional, arm, and breast cancer subscales, as well as trial outcome index-physical-functional- breast (TOI-PFB) cancer (TOI-PFB) was used to evaluate convergent validity of the target indexes (13, 14). For divergent validity, the correlations of FBSI-6 and -8 with emotional and social subscales and TOI-emotional-social-breast (TOI-ESB) cancer were used. Further, the associations of FBSI-6 and -8 with stress, anxiety, and depression, in comparison with TOI-PFB and TOI-ESB, were assessed. Besides, the known-groups analysis was conducted based on the history of metastasis, chemotherapy, radiotherapy, mastectomy, and time since diagnosis. The non-parametric inferential statistic was employed for data analysis, including the Spearman’s rho for the correlations (13), and the Mann-Whitney U and Kruskal-Wallis tests for group comparisons. P value < 0.05 was considered significant. Analyses were carried out via SPSS V.24 (IBM Inc.)

Table 1 reports the details of inter-item correlations. As it is shown, the item Ge6 indicated the lowest interrelation with the other items, including Gp2, Gp4, B1, and P2 (P > 0.05). Also, B1 and P2 from the breast cancer subscale were not significantly correlated (P > 0.05).

Table 1. Statistics and Inter-Item Pearson’s Correlations of FBSI Itemsa, b

Table 2. The Correlation of FBSI-6 and -8 with Unadjusted and Adjusteda FACT-B Subscales and Indexes (N = 223)a, b

bAdjusted by removing the redundant FBSI items. There was no redundant item in SWB and arm subscales.

According to Table 3, all of the indexes had significant and negative correlations with distress symptoms, P < 0.0001. However, there was a distinction in favor of the TOI indexes in the relationships with depression and to a lesser extent with stress symptomatology, P < 0.001. On the other hand, the associations between both FBSI-6 and -8 and anxiety were comparable to those of the TOIs, P < 0.0001. In addition, the FBSI-8 repeatedly outperformed FBSI-6 in terms of the associations with psychological distress.

This study aimed at reporting the validity of FBSI-6 and -8 indexes among a sample of Iranian women with breast cancer. Overall, the findings supported the convergent and divergent validity of the FBSI-6 and -8. The internal consistency was in an acceptable range for both indexes, similar to the results of Yost et al.’s study (13). Although FBSI-8 includes two additional items from breast cancer subscale (BCS), which showed a nonsignificant association with each other, the results indicated a better homogeneity among the eight items. While internal consistency reliability is considered as a property of the sample, rather the scale (20), the other sources of reliability, including the test-retest reliability indicating the consistency of measurements in specific time laps should also be examined in order to confirm the scale as a clinically reliable tool.

Furthermore, the present study showed that the FBSI indexes were to a lesser degree in correlation with depression and stress symptomatology, although they were closely correlated with anxiety in comparison with TOI indexes. Because cancer as a chronic condition confers the risk of psychological problems for the patients (21-23), the FBSI indexes may be seen useful in delineating the psychosocial factors associated with the breast cancer symptoms, which may foster or hamper the patients’ QoL.

Despite these acceptable validity properties, none of FBSI-6 and -8 could distinguish between patients categorized based on their statuses in metastasis, chemotherapy, radiotherapy, mastectomy surgery, and time since diagnosis. As an explanation, the assumption of differences between the patients might not serve well as a distinguishing rule for the purpose of instrument validity. Regardless of the fact that there is a general tendency toward reaching a satisfactory QoL over the course of time (24), a study revealed that there are some discrepancies among the patients in terms of the patterns of improvement in their QoL (25). These findings imply that the differences in the pattern of QoL improvement might blur the symptomatology included in FBSI index.

It should be noticed that, whereas the study of Yost et al. (13), revealed the ability of FBSI-6 to distinguish between patients with different ratings in their performance status in a cross-sectional analysis, the changes in longitudinal analysis became lower in some patients. The pattern of distinction and changes reported by Lee et al. (14), among English and Chinese samples in Singapore, on the contrast, suggested a relatively good ability of FBSI-8 in exposing the clinically significant differences in the symptomatology of patients based on their performance status. Likewise, in the current study, the FBSI-8 index performed better in terms of internal consistency as well as associations with various QoL outcomes and psychological distress.

As a recent systematic review on QoL of patients with breast cancer suggests (15), Iranian research in the field rarely utilized the FACT-B instrument. Nonetheless, the merit of FACT-B is that it does provide utilitarian indexes which may enrich the research with valuable results in terms of breast cancer-specific symptoms. Therefore, researchers may use these two validated indexes as well as the TOI indexes to gain an insight into the patients’ status in a biopsychosocial framework.

As a result of the cross-sectional study design, cautions should be considered in generalizing the results. Also, the study did not control for the cancer stage. Therefore, it is recommended that future researchers investigate the role of cancer stage in the FBSI’s applicability and determine whether there is any difference in patterns of relationship between FBSI and patients’ psychological states due to cancer stage. Further research is needed to evaluate the deeper properties of FBSI, especially as to the test-retest reliability and responsiveness to changes in patients’ performance. Future studies may also follow the Garcia et al. (26), to incorporate eight items of functional assessment of chronic illness therapy (FACIT) measures in order to improve the applicability of the FBSI in breast cancer patients.

This cross-sectional study confirmed the convergent/divergent validity of FBSI-6 and -8 indexes in Iranian patients with breast cancer. Also, the FBSI indexes indicated satisfactory internal consistency. Known-groups were not distinguished by the indexes. Further research is needed to advance the knowledge as to the FBSI indexes’ clinical utility and functional relationships with relevant constructs.