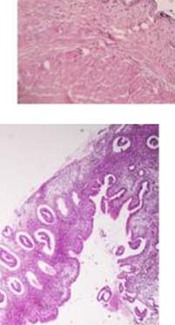 Endometriosis: A Rare Cause of Gross Hematuria

Endometriosis is a condition in which endometrial tissue exists outside the uterine cavity. Urinary tract lesions are present in 1 % of women with this condition.

A 34-year-old woman was presented to our clinic with a 3-year history of dysuria and frequency. Her past medical history was significant for cesarean sections, performed 3 years earlier. In our center, the patient underwent cystoscopy and transurethral resection of a lesion found in the bladder wall, which on histopathology examination appeared to be endometriosis. A course of six-month hormonal therapy with luteinizing hormone-releasing hormone (LHRH)-agonist (Dipherelin™ 3.75 IM per 28 day) was planned for her. One month later, trans-vaginal ultrasound revealed a nodule posterior to the bladder, which had grown 1 cm in the preceding month. Therefore, Hysterectomy, bilateral oophorectomy, and partial cystectomy were performed. The pathology report was Mullerianosis. During two years of follow up, the patient remained asymptomatic.

Endometriosis and endocervicosis should be regarded as important differential diagnoses in patients with gross hematuria and those suspected to have urothelial carcinomas.

Endometriosis, the presence of endometrial tissue outside the uterus, is a relatively common gynecological condition. About 10 to 15 % of women in their reproductive age are affected by this condition (1). This disorder is more prevalent among 25- to 45-year-old people /women, with its peak incidence between 30 and 40 years of age (2). Among those with endometriosis, 1 % have urinary tract lesions, in 84% of which the bladder is involved (3). To date, two types of bladder endometriosis have been introduced: the first type occurs exclusively after cesarean section, which is considered to be secondary to iatrogenic deciduael implantation; and the other type, called the primary form, is diagnosed in women who have never undergone surgery on the uterus before (4).

In this report, we present a 34-year-old woman with periodic gross hematuria secondary to endometriosis. A 34-year-old woman presented to our clinic with a 3- year history of dysuria and frequency. Her past medical history was significant for cesarean section, performed 3 years earlier.

Urine culture, pelvic and urinary tract ultrasound, and urine cytology had been previously performed in another center, all of which revealed normal results. In an office cystoscopic procedure, a small submucosal nodule had been reported. Punch biopsy from this nodule had showed papillary urothelioma. The patient underwent cystoscopy at our institute during a menstural period by which a 5 × 3 cm bluish, edematous, sessile submucosal mass was discovered. Transurethral resection of the lesion revealed bladder wall endometriosis. The patient underwent magnetic imaging (MRI) in search of residual endometriosis in pelvis in which a five cm mass resonance between bladder and uterus was found. A course of six-month hormonal therapy with luteinizing hormone-releasing hormone (LH-RH) agonist (Dipherelin™ 3.75 IM per 28 day) with follow up cystoscopy was planned for her. The cystoscopies were negative for any lesion and also an MRI did not show any abnormal finding. One month later, trans-vaginal ultrasound evaluation revealed a nodule posterior to bladder which became 1 cm larger during the preceding month. We offered two treatment options to the patient: starting LH-RH agonist again or hysterectomy and bilateral oophorectomy. Since she preferred the latter, hysterectomy, bilateral oophorectomy, and partial cystectomy were performed. The pathology report was endometriosis, endocervicosis and endosalpyngiosis (mullerianosis) involving mucosa and muscularis properia of urinary bladder (Figure 1).

During three years of follow up, the patient remained asymptomatic. She signed the informed consent and we did not disclose her personal information.

Endometriosis is a condition described as growth of ectopically located endometrial tissue in sites other than uterine cavity. Since gross hematuria and frequency are rare symptoms of endometriosis, this diagnosis should be kept in mind in encountering these symptoms, even in the absence of other endometriosis features (6).

Previously, mullerianosis has been indicated as the cause of microscopic hematuria in a case study, in 2012. In this study a mass intruding into the posterior aspect of the bladder was found, and for management LH-RH analogue was used, which achieved acceptable results (7). Therefore, we tried this treatment in managing our patient.

Metaplasia (a change in cell morphology into another cell type that is considered abnormal for that location) frequently occurs in urothelium, supposedly as a response to local stimuli (e.g. urinary tract infection, inflammation especially chronic, calculi, diverticula, catheterization, or surgical procedures).

Involvement of genitourinary tract with one of the non-neoplastic mullerian lesions includes: endocervicosis, endometriosis or endosalpingiosis occurs in 1 to 2% of cases, most of which are endometriosis (2). Conversely, endocervicosis is considered a rare condition, which was first described as a distinct concept, by Clement and Young in 1992, as a benign variation of endometriosis (8). Ever since, few cases of this entity occurring almost exclusively in women of reproductive age have been reported. This condition is characterized by existence of mucinous endocervical epithelium within the detrusor muscle of the bladder (9). This situation is characterized by the following features: occurring during reproductive age, being located in the posterior bladder wall and coexisting with endometriosis and endosalpingiosis (10). Among different predisposing factors associated with endocervicosis, history of previous Caesarean section appears to be the most prominent one (11). This association is not only apparent from our report, but it also is shown by all previous cases reported in this regard (12). They all have the same presentations as our case, with the main clinical features including a mass in the bladder and urinary complaints. Although this condition is very rare, considering the features of our case, it should be envisaged as a possible diagnosis.

Eosinophilic cystitis, an uncommon inflammatory bladder condition, for which the pathophysiology is still unknown, usually presents with hematuria, frequency, urgency and supra-pubic pain, in addition to sterile urine culture (13). Since we had two of these symptoms in our case this condition was considered a differential diagnosis until the pathology reported otherwise.

There are different causes for hematuria ranging from benign to malignant yet endometriosis and endocervicosis should be regarded in patients with gross hematuria and in differential diagnosis of urothelial carcinoma.