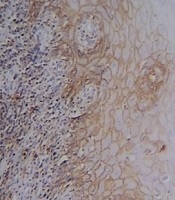 Oral lichen planus (OLP) is a relatively common chronic inflammatory autoimmune disease. OLP is more resistant than skin form and malignant transformation into oral squamous cell carcinoma (OSCC) has been reported in this lesion. Since SCC often originates from dysplastic lesions, evaluation of cancer stem cell (CSC) markers in dysplastic and premalignant lesions such as OLP seems to be necessary. Furthermore, chronic inflammation may induce some epithelial malignancies. CD44 as a CSC marker is expressed on epithelial cells and contributes to cell migration and tumor progression. Also, this cell adhesion molecule is expressed on leukocytes involved in various inflammatory diseases.

Significant higher expression of CD44 as a CSC marker in the epithelium of dysplastic OLP may show the role of this marker in malignant transformation and carcinogenesis process of this premalignant lesion. Higher immunoreactivity in sub-epithelial lymphocytes of dysplastic type indicates a probable role of chronic inflammation in the malignant potential of OLP.

Oral lichen planus (OLP) is a relatively common chronic inflammatory autoimmune disease that activates cytotoxic T lymphocytes against epithelial cells. OLP is more resistant than skin form and malignant transformation into oral squamous cell carcinoma (OSCC) has been reported in this lesion (1). A large number of OSCCs in the early stages clinically appear as premalignant lesions or potentially malignant oral lesions (PMOLs) (2). Since the risk of malignant transformation to OSCC for OLP lesions has been reported, World Health Organization (WHO) categorizes these lesions as PMOLs (3, 4). Therefore, early diagnosis of PMOLs including OLP is of critical importance. Therefore, using biomarkers to evaluate the disease at the early stages leads to the improvement of preventive therapies to suppress the disease in the initial phase (1).

It has been reported that the development of cancerous tumors is exclusively dependent on the functional role of cancer stem cells (CSCs) that cause the emergence of a new model of carcinogenesis known as cancer stem cells hypothesis. Since OSCC often originates from dysplastic lesions, evaluation of CSC markers in dysplastic and premalignant lesions seems to be necessary (1, 5, 6).

Among the markers of cancer stem cells, CD44 can be mentioned as a cell surface glycoprotein. The expression of CD44 is a distinct feature of the cancer-initiating cells and contributes to tumor endothelial reactions, cell migration, cell adhesion, tumor invasion, prognosis, and metastasis (7, 8). Since CD44 is expressed on epithelial cells, we evaluated this CSC marker in the epithelium of non-dysplastic OLP and dysplastic type as a PMOL lesion.

Recent molecular studies have given a new perspective on the association between malignant tumors and surrounding stroma. There is now enough evidence to accept the fact that the chronic inflammatory process is capable of creating a cytokine-based microenvironment. This growth environment can induce proliferation, differentiation, and movement of the cells. It also contributes to progression, invasion, and metastasis of cancer (9).

CD44, as a cell adhesion molecule, is expressed on epithelial cells as well as on leukocytes, and along with its ligand hyaluronan (HA), is involved in various inflammatory diseases including OLP. Investigation of the role and functional mechanism of this marker can serve as a therapeutic goal in chronic inflammatory diseases (10). Therefore, in the present study, in addition to evaluation of CD44 in OLP epithelium, the expression of this marker in sub-epithelial lymphocytes was also investigated.

This study included individuals with erosive/atrophic OLP referred to the Department of Oral Medicine, School of Dentistry, Mashhad University of Medical Sciences. The cases with fulfillment both clinical and histopathological features consistent with the World Health Organization (WHO) criteria were selected. The selection criteria included:

1. bilateral presence of papules or reticulate lesions, with or without atrophic/erosive lesions.

2. Bandlike zone of lymphocytes infiltration with signs of degenerative liquefaction of the basal cell layer (11).

Tissues were sectioned and evaluated histologically after staining in hematoxylin and eosin. Routine histological examination was independently reconfirmed by 2 experienced professionals. After confirmation of the cases, the hematoxylin- and eosin-stained sections were studied under low power (10×) and high power (40×) magnifications for the valuation of the dysplastic features.

Immunohistochemistry (IHC) was applied on 4um formalin-fixed and paraffin-embedded tissue sections. Tissue sections were deparaffinized in xylene and rehydrated in decreasing ethanol series. In order to antigen retrieval, the sections went through the 0.01citrate solution (pH = 6.0) for 10 min. To block endogenous peroxidase activity, solution of methanol with 0.5% hydrogen peroxide was used for 10 min. Tissue sections were then washed in Tris-buffered saline (TBS), pH = 7.6 and incubated with diluted normal serum for 10 min. The following monoclonal antibody was applied for 30 min at room temperature: anti- CD44 (clone DF1485, 1:50 dilution, Novocastra Laboratories, Newcastle, UK).

Of 30 patients with OLP, 12 were males and 18 were females with a mean age of 12.36 ± 46.73 years. There was no significant difference between the two groups regarding gender and age.

CD44 was expressed in all lining epithelial cells and sub-epithelial lymphocytes of OLPs with different degrees while 30% of normal mucosa samples showed negative epithelial immunoreactivity. Representative staining is shown in Figures 1-3, and the entire dataset are reported in Tables 1 and 2. CD44 expression in the epithelium of normal mucosa Dysplastic OLP showing immunostaining (4+) in the epithelium and subepithelial lymphocytes (A, 400×) and (B, 200×) In most dysplastic OLP cases, CD44 labeling index in the epithelium and sub-epithelial lymphocytes was strong (4+) (Figure 2). The greatest total score for epithelial immunoreactivity was found in dysplastic OLP, followed by non-dysplastic OLP and normal mucosa (Table 1). A comparison of the total score among the three groups revealed significant differences (P < 0.001). Also, the Pairwise comparison of CD44 expression in the studied groups was performed. According to Dunn-Bonferroni post hoc test all the paired groups demonstrated significant differences (P < 0.01).

OLP is a relatively common chronic inflammatory autoimmune disease. OSCC can be preceded by potentially malignant lesions such as OLP (4). Although the WHO classifies OLP as a potentially malignant oral lesion, there is considerable controversy regarding the malignant potential of this lesion. This controversy is due to a wide range of malignant transformation rates (0% - 12.5%) in OLP patients as well as different clinical criteria used for diagnosis of this lesion. Nevertheless, most studies demonstrated that OLP patients develop oral cancer at an increased rate (approximately 10 times higher risk) when compared to the general population (13, 14). A meta-analysis study also reported malignant transformation of OLP six years after the initial diagnosis with the mean rate of 0.27% per year (14).

The role of CSCs in epithelial dysplasia, tumor development, growth, and metastasis has been approved and investigated by various studies. Malignant transformation of dysplastic epithelium is reported to be 3% to 36% (1). Therefore, evaluation of CSC markers, including CD44, seems to be necessary for dysplastic and premalignant lesions such as OLP.

It has been shown that chronic inflammation may induce some epithelial malignancies. The relation between chronic esophagitis and esophageal adenocarcinoma as well as intestinal cancer and chronic inflammatory bowel disease has been reported (9).

It should be noted that inflammation itself, the basic pathological feature of OLP, can elicit histological features similar to mild dysplasia (15). Moreover, particularly in mild cases of dysplasia chronic inflammatory host response to the atypical cells of epithelial dysplasia can appear histopathologically similar to OLP (3). Therefore, although most of our reporting system included a diagnostic category of mild and moderate dysplastic OLP, we evaluated only moderate dysplastic OLP in our study.

CD44, as a cell adhesion molecule is expressed on epithelial cells and also leukocytes. This marker along with its ligand, hyaluronan (HA), is involved in various inflammatory diseases, including OLP. Investigating the role and functional mechanism of CD44 can serve as a therapeutic goal in chronic inflammatory diseases (10).

According to our results, higher expression of CD44 was reported in dysplastic lesions which shows the role of this marker in the carcinogenesis process as a CSC marker. Consistent with the findings of the present study, Kaya et al. also showed a high CD44 expression in epithelial keratinocytes of OLP (18).

Santarelli et al. reported that CD44 and osteopontin expression in epithelium of OLP patients were significantly higher than the control group and they concluded that these markers could play a role in the pathogenesis of OLP (19). Siponen et al. also demonstrated a higher expression of hyaluronan, CD44, HASI-3, and HYALI-2 in the epithelium of OLP patients compared to the control group (20).

Since CD44 is expressed on both lymphocytes and parenchymal cells, in addition to the role of this marker in the carcinogenesis process, its role in autoimmune diseases has also been taken into account in recent years (10).

One of the early events in inflammatory responses is the recruitment of inflammatory cells that are mediated by cell-adhesion molecules such as CD44 and the production of chemical adsorbents. Evidence showed that CD44 plays a major role in various inflammatory diseases and according to the previous studies the application of the Anti-CD44 antibody can control inflammatory bowel disease and skin encephalomyelitis (10).

In the current study, the expression of CD44 in OLP samples demonstrates its role in the recruitment of T lymphocytes in the pathogenesis of this lesion. In the study by Liu et al. most of the T cells infiltrated in the OLP lamina properia showed high CD44 immunoreactivity (21).

Yasuda et al. also reviewed the relevance of CD44 with inflammation and malignancy. They stated that CD44 as a major receptor for hyaluronan (an essential component of the extracellular matrix) has an important role in the inflammation process and potential for tumor formation. Therefore, a special focus should be placed on CD44-mediated signaling pathways in therapeutic approaches (22).

Similar to our results, Kaya et al. investigated CD44 isoforms including (CD44s and CD44V3-10) in OLP and observed CD44s immunoexpression in sub-epithelial lymphocytes and epithelial keratinocytes. Epithelial immunoreactivity of CD44v isoforms was decreased or absent. They concluded that the expression of CD44 isoforms in OLP is different from cutaneous LP which revealed that CD44 may play a role in the formation of LP in different locations (18).

Immunoexpression of CD44 in the epithelium and sub-epithelial lymphocytes of OLP indicates the probable role of this marker in the pathogenesis of this lesion as an inflammatory chronic autoimmune disease.

Significant higher expression of CD44 as a CSC marker in the epithelium of dysplastic OLP may show the role of this marker in malignant transformation and carcinogenesis process of this premalignant lesion. Higher immunoreactivity in sub-epithelial lymphocytes of dysplastic type indicates a probable role of chronic inflammation in the malignant potential of OLP similar to some other chronic inflammatory diseases.

Copyright © 2020, Author(s). This is an open-access article distributed under the terms of the Creative Commons Attribution-NonCommercial 4.0 International License (http://creativecommons.org/licenses/by-nc/4.0/) which permits copy and redistribute the material just in noncommercial usages, provided the original work is properly cited.
download pdf 7.91 MB Get Permission (article level) Import into EndNote Import into BibTex
Number of Comments: 0