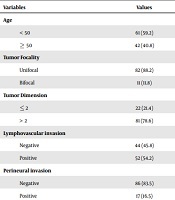 Breast cancer is the most prevalent neoplasm diagnosed in Iranian women.

The current study was performed to measure the hormone receptor status and its possible connection with the patient’s age, tumor size, histological grade, and lymph node status and involvement in patients with invasive ductal breast cancer (IDBC)

A total of 103 women with IDBC recently diagnosed at the Department of Pathology of Shohada-E-Tajrish Hospital were entered into this study. The mean age of the patients was 48.4 years, and 59.2% of cases were 50 years old or less.

Most lesions (78.6%) were more than 2 cm at their greatest dimension. Grade-II lesions were observed in a large number of patients and 59.8% of cases had lymph node involvement. Positive ER, PR, and HER-2/neu were detected in 59%, 57%, and 29% of patients, respectively. A significant correlation was found between patients’ age and histologic score, tumor dimension and both histologic score and nuclear grade, and, finally, between lymph node involvement and nuclear grade.

According to previous studies, the evaluation of hormone receptor status in patients with breast cancer is strongly recommended. Here, by studying its possible connection with the patient’s age, tumor size, histological grade, and lymph node metastasis, we detected some biomarkers, which could be used as prognostic indices in these patients. These biomarkers could help us in the clinical management of patients with IDBC by providing the best therapeutic options.

Breast cancer (BC) is one of the most occurring human neoplasms, which is globally responsible for one-fourth of cancers among women, with an elevated rate of 27% among females with a western lifestyle. BC also occurs among men with a negligible frequency of approximately 100 times less than that of women. Unfortunately, the prognosis is not promising mostly due to late diagnosis (1, 2). Adenocarcinomas are the most prevalent type of malignant breast lesions, which account for more than 95% of breast malignancies. Generally, the atypical ductal lesion is categorized into 2 subsets, including ductal carcinoma in situ (DCIS) and ductal adenocarcinoma, which is also known as the invasive ductal carcinoma (IDC). The former is a malignant non-invasive increase in epithelial cells limited by ducts and lobules. Excessive proliferation of neoplastic cells in breast tissue that has found its way to stroma in the duct wall is suggestive of IDC. According to the originating site of the tumor, invasive carcinomas are categorized into ductal and lobular (3). To decide whether a tumor is ductal or lobular, the cytoarchitectural profile of the tumor should be precisely determined that could pave the way for proper diagnosis (4).

Unfortunately, BC is prone to relapse even years after the initial therapy and tumor dormancy still is a controversial area among clinicians. In this sense, hormone receptors such as the estrogen and progesterone receptors (ER and PR), human EGF receptor-2 (HER2), antigen Ki-67, and the nuclear proliferation marker are essential predictors of progression and possible later incidence of BC (5). By the time of diagnosis, both ER and PR levels were commonly assessed for deciding on a definitive surgical procedure. Various studies support the fact that overexpression of HER-2/neu, a transmembrane receptor with tyrosine kinase activity is consistent with low tamoxifen response and, consequently, higher morbidity. Furthermore, ER, PR, and HER-2/neu-negative tumors were noticed among females over 50 years and are considered high grades (6-8).

Ki-67, which spotted following the vaccination of mice with Hodgkin’s lymphoma, is a non-histone DNA-binding protein in the nucleus involved in cell division. Concerning BC, a significant correlation has been found between Ki-67 expression and age, as well as nuclear grade and mitotic trend (9-12). Luminal epithelial and myoepithelial cells in healthy breasts demonstrate distinct and various keratin phenotypes with cytokeratins 7, 8, 18, and 19 expressions in the former, and α actin beside CK 5/6, 14, and 17 in the latter (13). The luminal markers expression has proven to be a promising survival predictor while basal markers, more specifically CK5 expression, result in unfortunate clinical outcomes (14).

ER, PR, Ki-67, and HER-2/neu biomarkers have prognostic implications among patients with BC. Furthermore, clinicopathological characteristics, including histologic grade, the size of the tumor, and lymph node status are essential factors in the prognosis of cancer. In this study, we aim at comparing ER, PR, Ki-67, and HER-2/neu expression and their relationship (if any) with patients’ age, histologic grade, tumor size, and lymph node status in patients with invasive ductal breast cancer (IDBC).

The current cross sectional study was conducted on 103 women with IDBC recently diagnosed at the Department of Pathology of Shohada-E-Tajrish Hospital (Tehran, Iran). The Ethics Committee of Shahid Beheshti University of Medical Sciences approved the study (no.: IR.SBMU.MSP.REC.1395.90) and the samples were obtained after taking informed written consent from the patients. Data obtained from patients remained anonymous and no intervention procedure was done.

Information, including the patient’s age, tumor size and grade, and lymph node status were obtained from the patient’s medical record. The mean age of the patients was 48.4 years, and 59.2% of cases were 50 years old or less. It is worth noting that cases with core needle biopsies and recurrent BC were excluded from the study.

Immunohistochemistry (IHC)-Labeled StreptAvidin Biotin (LSAB) method was performed in this study. Paraffin blocks were used to prepare 4 µm thick slides and staining was done to detect each biomarker separately. Tumor samples would be considered positive for ER or PR expressions if nuclear staining was more than 1%. The expression of HER-2/neu was scored as positive for complete membranous staining (equivalent to the FDA-approved DAKO HercepTest 2+ and 3+), indeterminate for partial membranous staining (1+), and negative for undetectable staining. Ki-67 status was considered positive when more than 10% of tumors stained.

The data were analyzed, using PASW version 18. Categorical and quantitative variables were assessed by Pearson’s chi-squared test and analysis of variance (ANOVA), respectively. To ensure the reliability of the whole procedure, proficiency and competency of the corresponding pathologist were constantly assessed throughout the study’s course.

Table 1 demonstrates the frequency and percentage of independent variables of the current study.

Seven hypotheses were proposed trying to draw connections between clinic-pathological characteristics and biomarkers with statistical proof.

According to the first hypothesis of this study, there is a significant relationship between patient’s age and ER, PR, Ki-67, and HER-2/neu expression, histologic grade, tumor size, and lymph node status. According to the Pearson’s chi-squared test results, there was a significant link between age and histologic score (Table 2) while no meaningful connection was found between age and other features such as nuclear grade, ER expression and intensity, PR expression and intensity, and HER-2/neu and Ki-67 expressions in malignant tissue.

The third hypothesis suggests that there is a significant connection between tumor dimension and ER, PR, Ki-67, and HER-2/neu expression, histologic score, and nuclear grade in the malignant site. According to the results of Pearson’s chi-squared test, the relationship between tumor dimension and both histologic score (Table 3) and nuclear grade (Table 4) was statistically significant. Based on the same statistical test, the tumor dimension demonstrated no significant relevance with ER expression and intensity, PR expression and intensity, and also with HER-2/neu and Ki-67 expressions in the cancerous site.

The fourth hypothesis proposed a significant relationship between tumor focality and ER, PR, Ki-67, and HER-2/neu expression, histologic score, and nuclear grade in the malignant site. According to the results of Pearson’s chi-squared test, tumor focality presented no statistically significant relevance with ER expression and intensity, PR expression and intensity, nuclear grade, and also with HER-2/neu and Ki-67 expressions in cancerous sites.

The fifth hypothesis of this study postulates that a statistically significant relationship is present between lymphovascular invasion and ER, PR, Ki-67, and HER-2/neu expression, histologic score, and nuclear grade in the malignant site. Regarding the Pearson’s chi-squared test data, no statistically significant link was noticed between lymphovascular invasion and features such as ER expression and intensity, PR expression and intensity, nuclear grade, histologic score, and HER-2/neu and Ki-67 expressions in the cancerous site.

All in all, most lesions (78.6%) were more than 2 cm at their greatest dimension. The grade-II lesions were observed in a large number of cases and lymph node involvement was detected in 59.8% of the cases. Positive ER, PR, and HER-2/neu were detected in 59%, 57%, and 29% of patients, respectively. A significant correlation was found between patients’ age and histologic score, tumor dimension and both histologic score and nuclear grade, and, finally, between lymph node involvement and nuclear grade.

In the current cross sectional study, we comprehensively studied the relationship between ER, PR, Ki-67, and HER-2/neu expression with age, histologic grade, tumor size and lymph node status among patients with IDBC. The results of this study could have significant clinical implications due to an upward trend of BC among Iranian women and the prognostic value of these biomarkers could help us in undertaking effective clinical interventions.

In a study by Kristina et al., the expression of ER, PR, HER-2/neu, Ki-67, and CK5 biomarkers was assessed among patients with early and late relapsing BC. They found that CK5 maintains a lower expression among metastatic patients. And, according to IHC profile of luminal A, this subtype of BC displayed a drastically decreased risk of early relapse. Furthermore, Ki-67 expression indicated early tumor recurrence and had direct relevance to tumor development (15). Siadati et al. (16) conducted a study on 300 paraffin-embedded tissue blocks obtained from cases with IDC, who undertook mastectomy. They realized that ER and PR had a significant positive correlation with each other and a negative correlation with HER-2/neu. They noticed that low histologic grade is correlated with ER and PR expression while high histologic grade could be linked to HER-2/neu expression. They also found that HER-2/neu expression is significantly correlated with lymph node involvement. However, they could not establish a significant relationship between these biomarkers and the patient’s age and tumor size (16). Karangadan et al. (17) studied the role of immunohistochemical characterization of Ki-67 and its relation with breast carcinoma by studying 60 patients throughout 3 years. They detected a statistically significant relevance between BC subtypes and the patient’s age, histological grade, and Ki-67 activity. Furthermore, they found a link between ER/PR expression and histological grade and Ki-67 activity (17).

Most studies have focused on the aforementioned prognostic markers and, unfortunately, the PNI is the area that has not been well-studied in BC to date. According to a few previous studies, PNI is a distinct route for tumor invasion, which completely differs from lymphatic or vascular invasions (18). PNI is more common in other types of cancers such as head and neck carcinoma than BC. In a study conducted by Deger et al. (19), they looked for a link between well-established histopathological criteria and overall survival in patients with IDC. Accordingly, they found that tumor size and grade and PNI are parameters, which negatively affect patient survival (19).

In the current study, we found that the size of most lesions (78.6%) was more than 2 cm at their maximum size. Most patients had intermediate lesions (classified as grade-II) and 59.8% of cases showed lymph node involvement. Positive ER, PR, and HER-2/neu were detected in 59%, 57%, and 29% of patients, respectively. A statistically significant correlation was noticed between the patient’s age and histologic score, tumor dimension and both histologic score and nuclear grade, and, ultimately, between lymph node involvement and nuclear grade. These results highlight the significant role of these biomarkers as prognostic indices in patients IDBC.